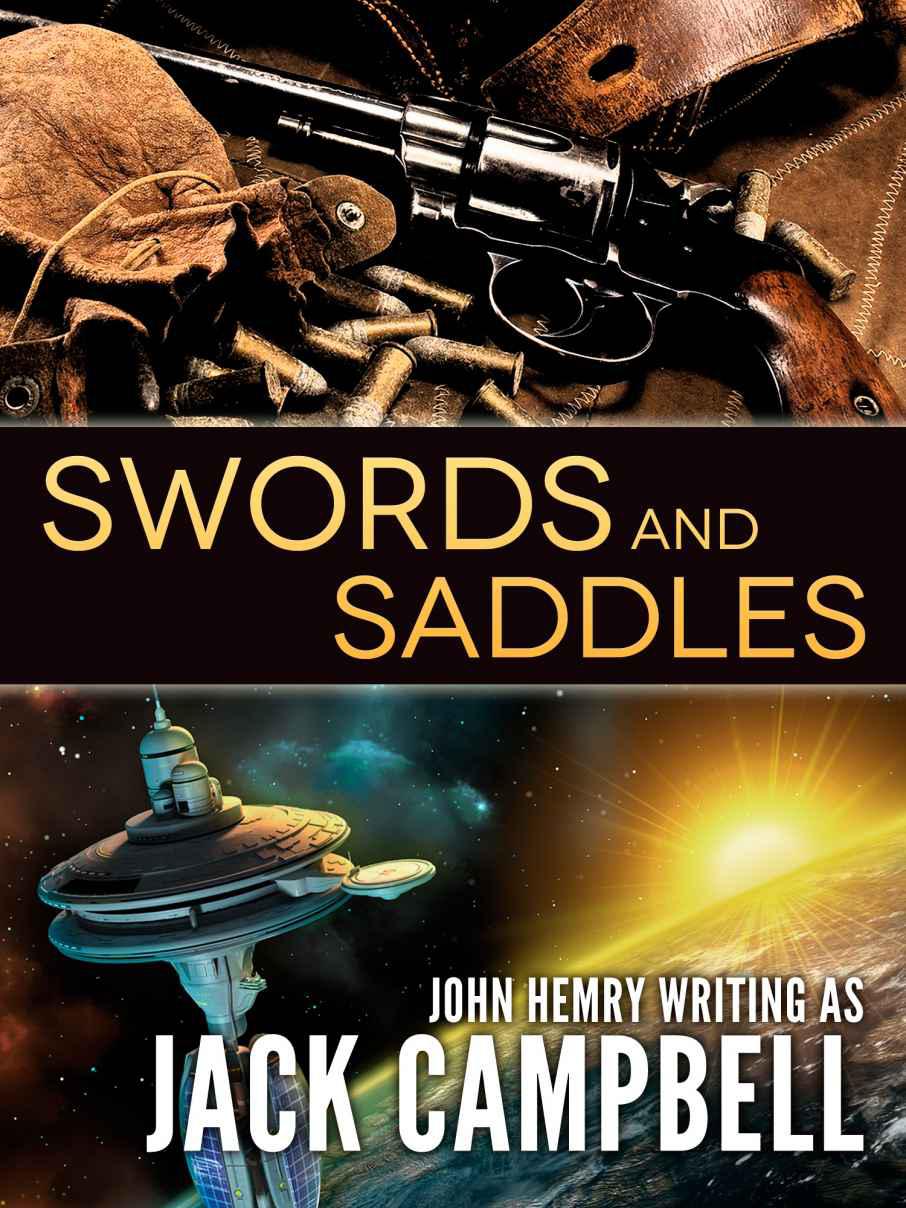 OTHER BOOKS BY THE AUTHOR

Paul Sinclair: JAG In Space
A JUST DETERMINATION
BURDEN OF PROOF
RULE OF EVIDENCE
AGAINST ALL ENEMIES

The Lost Fleet: Beyond the Frontier
DREADNAUGHT
INVINCIBLE
GUARDIAN

Collected for the first time in this e-book by Jabberwocky Literary Agency, Inc. in 2013

Author's Note on
The Rift

One of the common assumptions of science fiction and fantasy is that once you know how to communicate with someone (how to speak their language) you will also understand them. Whether they are elves or six-armed aliens from Moduk VI, comprehending what someone means is usually simply a matter of talking to them. That has always bothered me, because among humans even those who share a common language often have trouble understanding each other. What would really happen if humans were dealing with aliens who didn’t think like us? How much would the inevitable misunderstandings among the humans hinder grasping the meaning behind the words of the aliens? And what if figuring out the answers was literally a matter of life and death? Those questions are what led to
The Rift
.

Imtep – Fifth planet from its star. Close to Earth-like (.95 on Ming-Hoffman Scale). Dominated by a single massive continent sprawled across equatorial regions. Eastern areas of the landmass are very rugged, but the central and western regions feature extensive prairies or steppes around a large, shallow inland sea. Native sentient species the Izkop (“People”) are humanoid, organized into tribes or clans, the majority living on the plains in agrarian/herder communities. Technology is very limited, primarily craft-metallurgy which allows the construction of durable implements. The Izkop are evaluated as “competitive but non-belligerent,” research reports identifying their dominant culture as well-integrated with their environment. A research facility with a staff of eighty has been established on Imtep. Imtep is classified Type Three for human visitation, with pre-clearance required and only small parties allowed to avoid disrupting relations with the native population.

They had to pry Goldera out of the last set of armor when the power pack drained to exhaustion. After forcing open enough of the suit to get Goldera free they left the armor lying there as they resumed walking, the empty carcass sprawled in the short, tough grass like a body denied the benefit of burial. There wasn’t any simple way to conceal it, and they lacked the time and the strength to do anything else. The blast rifle, useless without power, lay abandoned alongside the armor.

No one had spoken for at least an hour, everyone concentrating on walking, putting one foot before the other despite the fatigue filling their bodies and minds. Corporal Johansen squinted up at the too-bright sun, trying to remember what had happened over that long day since reveille had sounded at zero three hundred to awaken everyone for the rescue operation. But he couldn’t focus on any single, clear memory, his mind filled with disjointed images of the deathtrap which had been a place called Amity.

Johansen brought his gaze down to stare at the back of Sergeant Singh. The sergeant’s last spoken command had been “follow me,” given as they looked down at a valley where nothing now moved or lived except swarms of Izkop warriors. Since then, Singh had been leading them over the hills around Amity, down through patches of woods and shrubbery, and now across this open area. Fear had lent them speed at first, but now nothing kept them moving except the sergeant’s steady pace in front.

With a major effort, Johansen called out just loudly enough for Sergeant Singh to hear. “Sarge.”

The sergeant didn’t stop, instead turning his upper body and head to look back at the corporal as he kept moving, his face locked into the same expressionless mask as someone under inspection. “Yeah?”

“Understood. Not out here.” Singh raised one arm to point ahead, toward a tree line. “There. Under cover.”

Tall, dark Private Adowa looked toward the trees, her eyes framed by runnels of sweat on her dust-streaked face. “How far is that?”

One corner of Singh’s mouth turned upward slowly. “Check the map,” his voice grated out sardonically.

The map had been digital, of course, linked to satellite arrays which the Izkop had already shredded. Normally, the soldiers would have called up the map, gotten their precise location, and a precise distance to the trees ahead. But the navigation units had been built into the powered armor, and that was gone along with the sats. All any of the soldiers could do now was look around, inexperienced with judging distances by eye and unaccustomed to marching this far without power assist from their armor.

How far had they come since the dropship set down hard on one side of the valley which had held the human presence on this world? As the platoon had spilled out of the broken dropship they had been presented with a balcony view of the disaster unfolding in the valley itself. Debris from what been the buildings of the human civilian community still falling back to the surface, craters marking the graves of damaged dropships which had plowed in too hard for any survivors, elsewhere scattered groups of soldiers firing frantically at the masses of Izkop swarming over the entire valley floor. More Izkop popped up, among and all around the platoon, their heavy spears flashing in the light of the morning sun, surging into the dropship to wipe out the crew, dragging down soldiers and tearing apart the robotic mules carrying the backup power packs. Sergeant Singh had rallied them, tried to get as many soldiers as he could up the side of the valley, while everyone shot as fast as they could and members of the platoon got swamped one by one.

Where had all of the aliens come from? Somebody had been screaming “out of the ground” on the comm circuit before their signal cut off.

Johansen focused on that puzzle to distract himself from the fatigue that threatened to overwhelm him.
Out of the ground.
He hadn’t had much time to look around during the fight. None of them had. But he recalled visions of slabs of turf lying neatly cut and overturned. “The ground,” he muttered. “The bastards were all lying under the sod.”

Private Stein turned partway to frown at Johansen, then his expression cleared with understanding. “That’s where they came from? Because nobody said anything going in. Landing fields are clear, they said.”

Adowa shook her head. “They also said we should be careful not to cause any violent reaction by the Izkop. Just a rescue and security op in a ‘possibly non-permissive environment.’ Possibly non-permissive, hell. Orbital sensors can’t see aliens lying under a layer of dirt and grass, ready to kill us as we hit dirt.”

“What did the damned civilians do to make the Izkop want to wipe out everyone and us in the bargain?” Private Nassar wondered. “The Izkop didn’t care how many of them we killed.”

Only Private Burgos answered, her eyes haunted. “We didn’t kill enough,” she whispered.

They fell silent again after that, just trying to keep moving in the wake of the sergeant, who plowed onward as if he himself were a suit of armor with an inexhaustible power supply. Johansen looked backwards at times, fearing to see the shapes of Izkop coming after them, and irrationally hoping that other soldiers would appear to join them. But he saw nothing, though as the march went on under the blazing sun Johansen sometimes imagined others marched with them, seeing the shapes of soldiers he had once known wavering insubstantially until he blinked and shook his head to clear it. The tree line gradually grew closer, resolving into a thin forest which would offer at least a little cover from the Izkop and a little shade from the sun.

Singh kept them going after they reached the first trees, onward about a hundred meters, before he stumbled to a halt. “Rest. Half an hour.”

The others didn’t so much sit down as drop, collapsing in place with expressions of mingled pain and relief. Johansen let himself fall as well, luxuriating in not having to keep moving, but after a few minutes forced himself to struggle up until he sat with his back against a tree.
Second in command. You’re second in command now.
The lieutenant was dead, the other sergeants were dead, and so were the other corporals. For that matter, so was the colonel and everybody else ranking higher than the sergeant.
Hell, I’m second in command of the entire relief force now. All eight of us that are left.

Eight out of a little more than two hundred in the battalion.

Johansen looked at the six privates who had made it out of the valley with him and Singh. Goldera, short, lean and wiry, lay on his back, staring blankly upward. Adowa, her dark face and hair blending a bit into the shadows beneath the trees, had a jaw slack with fatigue, but her eyes kept roaming the woods, on watch for danger. Archer, one of the worst shots in the unit despite her name, was a bit smaller than Goldera but had clung stubbornly to the platoon’s portable long-range comm unit despite its weight and now lay hugging it to her chest with both arms. Nassar sat limply against a tree, but like Adowa his eyes were still alert and searching the woods around them, the buzz-saw light machine gun resting on his lap. Stein, big and solid, lay as if dead, only the movement of his chest revealing that he still lived. Burgos, her eyes open but glazed, seemed to still be looking at the deadly chaos around Amity and unaware of their current surroundings.

Sergeant Singh had lowered himself to sit, breathing deeply, his eyes hooded in thought as if they were just on some especially difficult training mission and the sergeant had to figure out how to beat a tough scenario.

As if sensing Johansen’s gaze, Singh nodded to him. “Now that we’ve reached cover we’ll rest ten minutes each hour after we get going again.”

News which normally would have been greeted with muttered complaints from the tired privates brought nothing this time, a measure of their utter exhaustion, but Adowa stopped scanning the woods long enough to look at Singh. “Where are we going?”

Singh jerked his head in the direction they had been traveling since leaving the valley. “Before my armor gave out I spotted a place on the map. A small outpost of some kind along a river. At least one permanent building. We’re sure to hit the river if we keep going this way. Then we find that outpost.”

“Yeah. And maybe there’s food at that outpost,” Johansen said. They hadn’t carried much, just the usual emergency packs. The other rations had been destroyed with the dropships.

“We hope,” Singh replied. “And maybe some shelter. Depends what the Izkop did to it.” He didn’t have to elaborate. Much of Amity had been intact when the dropships launched, but just before the Izkop erupted out of the soil they had blown apart all of the buildings, taking soldiers and dropships with them.

Adowa shook her head. “Safe? How many Izkop got to be looking for us, Sarge? There were thousands back there, and they know we got clear.”

The Prison Inside Me by Gilbert Brown
The Case of the Troubled Trustee by Erle Stanley Gardner
Maggie Cassidy by Jack Kerouac
Isaac Newton by James Gleick
Samantha James by Bride of a Wicked Scotsman
Madeleine Abducted by M.S. Willis
The New World: A Step Backward by Skrzynski, Andy
Yesterday's Cat: Episode 1: Before the Storm by Naomi Kramer
Mrs. Fry's Diary by Mrs Stephen Fry
White Bread by Aaron Bobrow-Strain
Our partner