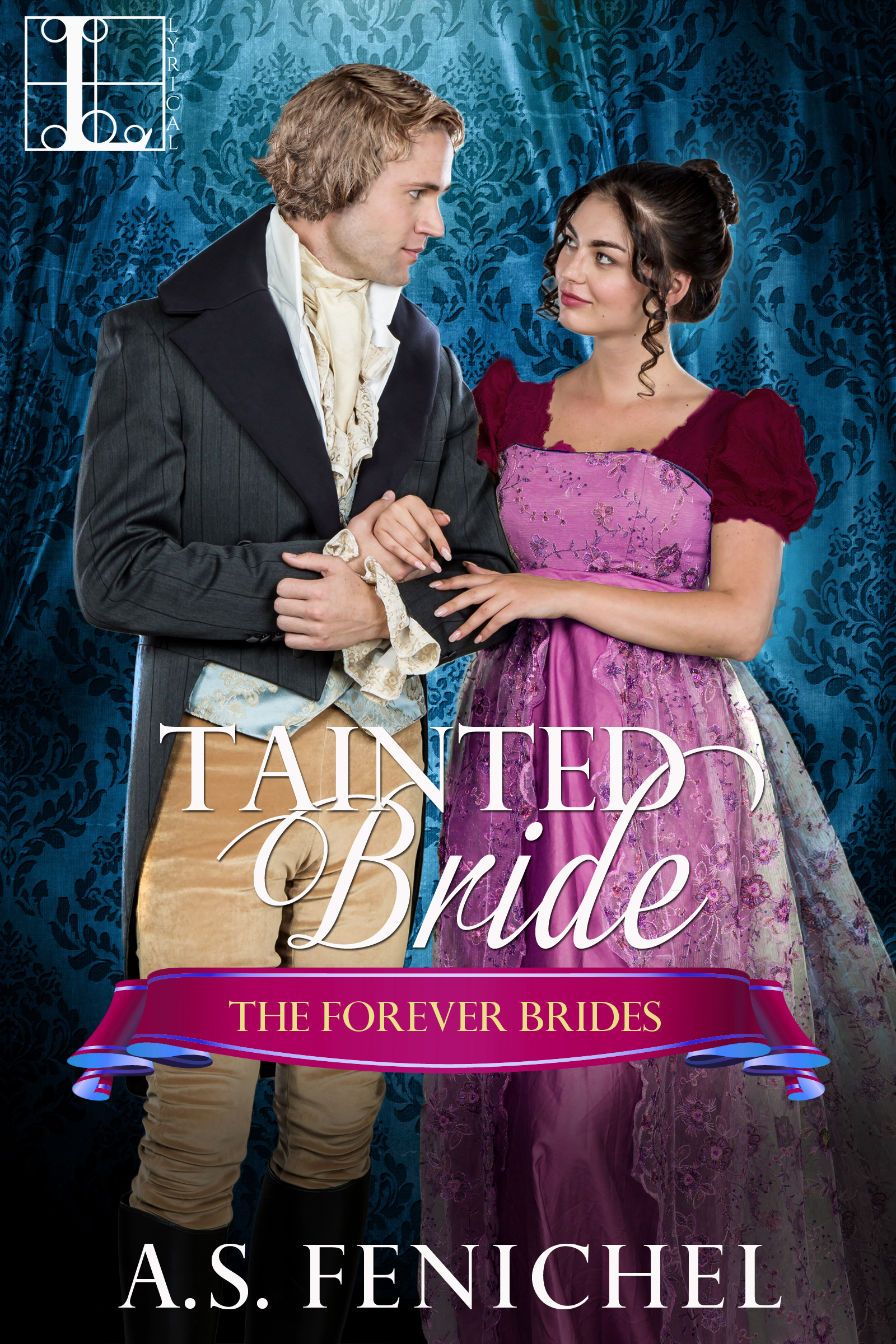 Only trust can save her….

Sailing to London, Sophia Braighton only hopes to escape certain ruin. But when she arrives, her Great Aunt Daphne has other plans for the American-born beauty. Determined to marry off her niece to a man of means, she propels Sophia into London society, not knowing that the young woman’s trust in men is shattered. In fact, Sophia never expects to ever feel anything for a man. Then again, she never expects to find herself in the company of the dashing earl of Marlton….

From the moment he sees Sophia, Daniel Fallon feels alive in a way he has not since his broken engagement. Though the vulnerable beauty shies from the passion burning bright between them, Daniel is determined to court her and make her his bride. And when he learns of the painful secret she harbors, he is equally determined to take revenge on the man responsible. But will the quest destroy him—and his future with his beloved?

This book is dedicated to those of us who have lost their better half.

One day the sun will rise again.

For Dave Mansue, who is my sunrise.

Books like this one are from the heart and therefore need a lot of help to see the light of day. I wrote Tainted Bride as part of a healing process. I wanted to let people know that finding happiness after tragedy, any tragedy, was possible. Because my own journey has many turns, I want to acknowledge the people who kept me going and helped me along the way. Eleanor Fenichel (Mom), Harvey Fenichel (Dad), Lou Fenichel, Linda Tugend, Amy Fenichel, Kenny Tugend, Lisa Brown, Debra Kaplan, Clinton Haldeman, Lorraine Mannifield, Bill Kaplan, Keith Mannifield, Stacey Carton, Denise Ragolia Ayers, Dave Mansue, Karla Doyle, Karen Bostrom, Shelly Freydont and NANOWRIMO.

After six weeks of seasickness, Sophia’s legs wobbled on the gangplank. She searched London’s crowded dock for her aunt and uncle. A shame her aching muscles kept her from running to dry land and finding them. She wasn’t above kissing solid ground.

Her maid, Marie, and footman, Jasper, hadn’t left her side since Sophia’s mother charged them with her care on the journey.

People from every walk of life bustled around the docks, unloading stores and loading supplies for the next journey. A woman in a serviceable dress hugged a young man as he exited the ship from steerage. The mother and son reunion stuck like a knife and she turned away as a child’s screaming pulled her attention to the baby who had also endured the long voyage.

At the bottom of the walkway, an older woman in a perfectly tailored burgundy morning dress glanced at something one of her impeccable footmen held. She took the object and pursed her lips. Brown spots marred her tapered hand as she smoothed her bun, though not a hair dared go askew from the perfect coif. She evaluated Sophia down the length of her narrow nose and her frown deepened tightening the profound lines of someone who wore the expression often.

When Sophia reached the dock, one of the woman’s footmen approached. “Miss Braighton?”

A touch of sympathy in his eyes, he nodded. “Follow me, please, Miss.” He walked her to the woman.

Handing Sophia a miniature portrait of herself, she spoke with a deep, formal air of authority. “I’m Lady Daphne Collington, your great aunt on your father’s side. You will be in my charge. Your things may be loaded in the carriage.”

Jasper ran off with her ladyship’s footman to load the trunks. Dressed in navy blue livery, he looked better than Sophia, but shabby in comparison to the Collington servants in turquoise and bright white.

Sophia handed her miniature back and covered her dismay with a pleasant smile. Taking a deep breath to quash her nausea, she hoped the carriage loading would take some time. The thought of being closeted into another moving vehicle had her in knots. “Lady Collington, where are my Aunt Adelaide and Uncle Cecil? I was given to believe they would be fostering me for this season.”

She would never survive the season with her notorious aunt. Unable to go back to Philadelphia, she held her tongue and hoped for the best. No. There was no going back, and with Lady Collington as her chaperone, there would be no hiding away.

“I’m not accustomed to being spoken to so frankly by one so young. You are far too direct, a consequence of being raised in the Colonies, to be sure. In addition, you are emaciated and we shall have to do something about those ill-fitting clothes.” Lady Collington scrutinized her. “I have no idea how we will get you married. Skin and bones is not at all the fashion this season. And that hair, blond is much more in style. Is it always so stringy or is it the salt air?” She climbed into her carriage.

There was no help for it. She should be happy anyone would have her after her banishment from home. “Marie, will you be comfortable in the carriage with my trunks?”

Footmen were loading her trunks into the coach behind the elegant carriage with terrible efficiency.

“Of course. The question is, will you?”

Sophia forced a smile and leaned toward Marie. “Mother is very fond of Aunt Daphne, but she did warn me that she can be a bit harsh at first blush.”

Marie raised narrow eyebrows, bobbed, and strode toward the other carriage.

Sophia stepped into the carriage and sat opposite Daphne.

Lady Collington straitened the crisp white lace at her collar. “My niece and her husband have gone to the country. The child is ill again.”

Sophia’s chest tightened. Best to drop the subject. She would learn more from the servants regarding her cousin than from Lady Collington. “I’m not usually so thin. I’m afraid the voyage was uncomfortable for me.”

Lady Collington’s eyes widened before her stern gaze returned. “Seasickness is a matter of the mind. You should be stronger-minded than a common girl and have been able to overcome such a disturbance.”

Sophia hoped she didn’t look as stunned by Daphne’s announcement as she felt. Otherwise, she was gaping at the woman. “I see. Have you traveled much abroad then, Lady Collington?”

“Why would I ever wish to leave England?”

Sophia’s parents had told many stories about her great aunt over the years. The dowager countess was a widow of an earl who had died before Sophia was born. Every time Sophia’s father received a letter from his aunt, he would read it to the entire family. The contents were always severe, but the Braightons found the messages amusing. In a recent letter, she had disclosed that her son, the current earl, had married but chose to stay most of the time in the country. A circumstance the dowager found quite vexing.

Sophia hid her amusement. “I cannot imagine. May I call you aunt?”

“If you wish, but only in the confines of family and close friends. I assume you have been taught proper etiquette.”

Lady Daphne’s piercing blue eyes narrowed. “This Mirabelle, was she English? I hope your mother did not send you to some Italian to learn manners.”

“Miss Mirabelle was very much English, Aunt Daphne.” The carriage began moving, and she tried to ignore her nausea. “I was under the impression that you quite liked my mother. She has always seemed very fond of you, whenever she speaks of England.”

“Of course I like your mother. She is a delight and I regret my nephew chose to take his family to America. I advised him strongly against it. That does not mean I would wish your manners to be in the Italian style. It would make my work much more difficult. English men have a certain expectation of a wife, you know.”

“Yes, Aunt.” Looking forward to a bed that didn’t move while she slept was her only solace.

Daphne gave her a hard look. “Do you not wish to find a husband?”

“I’ll do as you tell me, Aunt.” It was a strain, but Sophia was too tired and sick to argue with a woman who’d never understand.

“Of course you will.” Daphne ran her finger under her collar where the satin and lace caused an angry rash.

They travelled the rest of the way to London’s Grosvenor Square in silence, though she felt Aunt Daphne’s gaze on her the entire drive.

As Sophia stepped down onto solid ground, she covered her giggle with her hand. There would be no more rocking of boats or carriages for a while.

The thirty-foot ceiling in the foyer was capped by a crystal chandelier glittering like a crown. Polished to a high shine, the wooden railing of the curved staircase enrobed the space.

“This is your home? No one else lives here with you?” Even with the massive sitting room on the right and library to the left, the walls closed in on her. It was all as grand as her father’s stories had indicated.

Daphne cleared her throat. “Upon his father’s death, my son, the Earl of Grafton, gifted me this townhouse, since it had long been my home in London. He purchased another for his new wife.”

“It’s so big.” How would she, Sophia Braighton from Philadelphia, ever fit in such a place? She stepped across the white marble with grey veins. Black accent tiles formed geometric shapes in the floor and walls of the entry.

“There will be plenty of time to explore the house, Sophia. You must be exhausted and I would like to rest as well. Mrs. Colms, the housekeeper, will show you to your room.”

A large woman in a gray dress and white cap stood off to the side.

“Tonight I’ll have your meal sent up, but in the future, I expect, you will prefer to dine with me. We shall not accept any invitations for balls or dinners this week, while you recover from your journey. However, we do have a picnic in three days, which we will attend.”

The Gilded Cage by Blaze Ward
Devil's Manhunt (Stories from the Golden Age) by Hubbard, L. Ron
NYPD Red by James Patterson
On Azrael's Wings by D Jordan Redhawk
It Had To Be You by June Francis
Master of the Inn by Ella Jade
Home Improvement: Undead Edition by Harris, Charlaine
Maid To The Billionaire: The Tycoon's Baby (Contemporary Romance Novel) by Rayner, Holly
Murder In The Motor Stable: (Auguste Didier Mystery 9) by Myers, Amy
Beneath the Skin by Amy Lee Burgess
Our partner