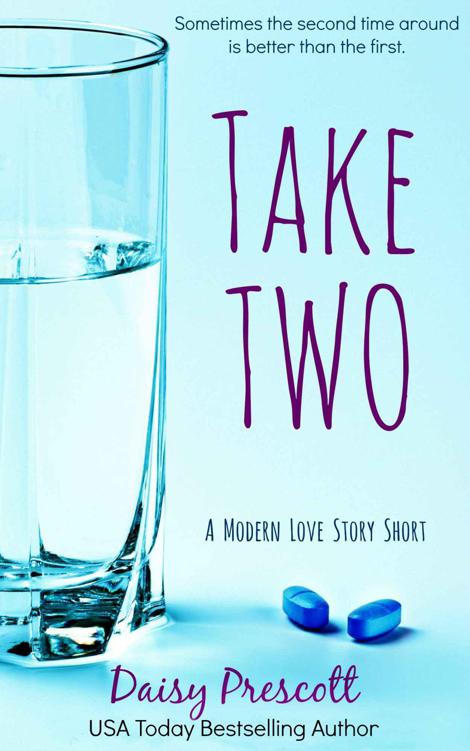 With the help of meddling friends, the world's largest burrowing clam, and a hot lumberjack, Maggie Marrion and Gil Morrow got their second chance at love in
Geoducks Are for Lovers.

Now living together, they're discovering that sometimes the second time around, especially when it comes to sex, is better than the first. Or can be with the help of magical blue pills.

Is a trip to the ER worth it for a night of wild sex at forty?

Take Two
is intended for mature audiences, 18 and up, because it contains middle age people kissing, recreational prescription drug use, and outdated references to the late 20
th
century.

Geoducks Are for Lovers

Confessions of a Reformed Tom Cat

Take the Cake and Run

No part of this book may be reproduced or transmitted in any form without written permission from the publisher, except by a reviewer who may quote brief passages for review purposes.

This book is a work of fiction. Names, characters, businesses, organizations, places, events, and incidents are the product of the author’s imagination or are used fictitiously. Any resemblance to actual persons, living or dead, events or locales is entirely coincidental.

“Only if you want to. No pressure from me.” Maggie looked down at the little blue pills still safely ensconced in their silvery packet.

I smiled at her. “What’s the worst that can happen?” I ran my hand over her hair.

“A never-ending erection? A trip to the ER, and the embarrassment of having to tell a doctor what’s wrong with you?”

“If that happens, you have to promise never to breathe a word of it to anyone.”

“So you’re willing to risk all that for a roll in the hay?” Amusement colored her question.

“Sure, as long as no actual hay is involved.”

“Okay, bottoms up!” She handed me a blue tablet and the glass of water from my nightstand.

“Pun intended?” I knew my sly smile matched the devilish glint in my eyes.

Cardboard boxes and plastic bins cluttered the downstairs of Gil’s house. I’d been spending more and more time here since the reunion. Last weekend, we’d finally gone to the island and loaded two cars full of boxes, which contained more kitchen stuff than clothes. Or shoes. Luckily, Gil had bachelor cupboards and closets. I teased him about his limited collection of mismatched bowls, pint glasses and single cookie sheet, but I was delighted for all the extra space. His constant reminders that his house was now our house made me happy in a way I’d never imagined six months ago. My beloved stainless steel stand mixer sat on the counter next to his deluxe coffee/espresso machine.

“Why does anyone need so many glass jars?” he asked, emptying one of my boxes, glass clinking against glass.

“Why does anyone need so many pint glasses?” I gestured at the open cabinet.

“I have wine glasses, too.”

“It looks like you’ve done all your shopping in the gift shops of micro-breweries and wineries.”

“And that’s a bad thing?” His chuckle was low and settled deep under my skin.

“Not at all.” I set my Mason jars alongside his collection on the shelf.

“Are you smiling at the cupboard?” He stood behind me and wrapped his arms around my waist.

I tried and failed to temper my grin. “I am. I’m remembering the first time we shared a kitchen.” I wondered if we’d still dance to “Call Me Al” in this kitchen the way we had all those years ago.

“Listen Betty, college didn’t count.” Gil’s chest rumbled with his laughter against my back. He’d remembered too. “Plus, we had housemates.”

“Without benefits.” He swept my hair down my back.

“We were silly youth who thought we knew everything and had all the time in the world to let things unfold.” He kissed the top of my head.

“Silly, stupid girl.” I couldn’t argue with him. My smile returned thinking about this moment and this life, and how unexpected and right it felt to be here.

“It’s ridiculous how happy I am right now.” I pulled his hand to my lips and kissed the back.

“Is this a euphemism or real pie, involving filling?”

His arms tightened around me and he dragged his scruff over the skin between the collar of my sweater and my jaw. I shivered. Oh, two could play at this game. I arched my back and rubbed my ass against his jeans.

“Filling could apply to either.” His fingers slid closer to my breasts. “I love your pie. What kind is up to you.”

“You said it first.”

My heart thumped quicker in my chest. After months of flirting on the phone, our not-so-dirty euphemisms still made me smile. They weren’t sexy, or really all that dirty, but they were goofy like us. “I’ll never get all these boxes unpacked.”

“Let’s chuck them all. We can live with pint glasses, jars and paper plates.” His hands traveled over the soft swell of my bra and he stepped impossibly closer. He lowered his voice. “I'd rather fill a box—”

“Maggie …” He squeezed me while grinding his hips.

His chuckle was muffled, but audible. “I’m trying seduce you and get you to make out with me. Forget about the unpacking.”

“Oh,” I said when his fingers found my nipples.

“The unpacking can wait.”

I peered over my shoulder into his deep brown eyes. “We could at least clear off the counter.”

He glanced behind us at the island and then quickly back at me with a silent question.

“It looks like it could be an ideal height.”

His expression morphed with restrained excitement. “For?”

“Rolling out pie crust.” I turned in his arms to face him and pushed against his chest, encouraging him to back up.

He groaned and grabbed my ass, pulling me along with him. “I’m sure it’ll be great for that, but let’s test it out for other things first.” He grinned, and then swept his arm out, knocking the empty boxes to the floor where they landed with soft thuds.

I matched his expression. Dark hair surrounded a face I’d known half my life. I trailed my hands over the deep green thermal covering his broad shoulders and down his toned biceps.

His long fingers wrapped around my waist and easily lifted me up to the cool granite of the counter. He settled his hips between my legs before kissing me softly at the corner of my mouth.

“Nothing more than this,” he whispered against my ear, his warm breath tickling me as he sang along to the song playing on the kitchen's speakers.

I hummed at his words and the memories they conjured. My gaze met his for a few beats.

This man. This man was everything.

I reached for his fly and what strained hard and heavy beneath the denim.

Our pants ended up on the floor as we lost ourselves in each other. Hands swept over warm skin. Tongues teased and tasted. I tugged down his boxers until they skimmed his legs to puddle at his feet. I was right. This counter was the perfect height for his six foot frame.

I opened my mouth to speak, only to be interrupted by the electric chime of the doorbell.

“Expecting anyone?” he asked, his breath husky from our counter encounter.

“No one ever expects the kraken.”

He responded by tugging on my earlobe with his teeth.

I moaned. “There’s a river. Two rivers. Double the odds for a kraken.”

“Do krakens live in the Willamette?”

“I was thinking more the Columbia.”

“Oh, sure, the Columbia. Don’t they need the deep, dank depths of the oceans?” He pulled away to meet my gaze.

“No, of course not. That would be silly.”

The ringing from the hall continued.

“Should we get that?” I asked.

“We could pretend we’re not home.”

Loud knocking replaced the chimes of the doorbell.

“They seem pushy for Jehovah’s Witnesses. Or those sweet Mormon missionary boys.”

He raised an eyebrow. “Do you have a thing for young men on bicycles?”

I laughed. “No, but my grandmother used to invite them in for lemonade and cookies. Then, flirted with them.”

A combination of knocking and ringing created a cacophony at the front door.

Gil sighed and reached for his jeans. “I should probably put my pants back on and answer it.”

He shuffled himself back into his boxers and jeans. I watched his long fingers button his fly, mourning the loss of the view.

“That looks uncomfortable.” I pointed at the outline of his hard length.

“You might want to get dressed in case it’s someone we know,” he called out as he walked down the hall. “I’m coming.”

“You were about to.” I snickered.

“Get dressed, Maggie May. It’s Selah.”

At the mention of my best friend’s name, I hopped off the counter, straightened my sweater, and then located my jeans on the floor near the stove.

“What’s this about coming?” Selah’s voice rang out from the door.

I hopped around, pulling up my jeans as her boots echoed down the hall.

“Damn it, I knew I shouldn’t have brought up the kraken three times. Selah’s like Beetlejuice.” I smiled when her familiar dark bob appeared at the entrance to the kitchen.

“Who are you calling a kraken?” Selah eyed my disheveled appearance, scanning my rumpled clothing. “You might want to zip your jeans, Maggie. Looks like I’m interrupting something delightful.” Glee danced in her green eyes.

I quickly adjusted and zipped my jeans. “As a matter of fact—”

“Maggie was about to make a pie.” Gil interrupted.

Selah’s head turned as she studied the kitchen. A few full boxes sat on the counter and empty boxes laid on their sides, scattered across the floor. There was no flour, or other baking supplies, in sight. She returned her focus to me and arched her eyebrow. “Really? We’re going with the pie euphemism?”