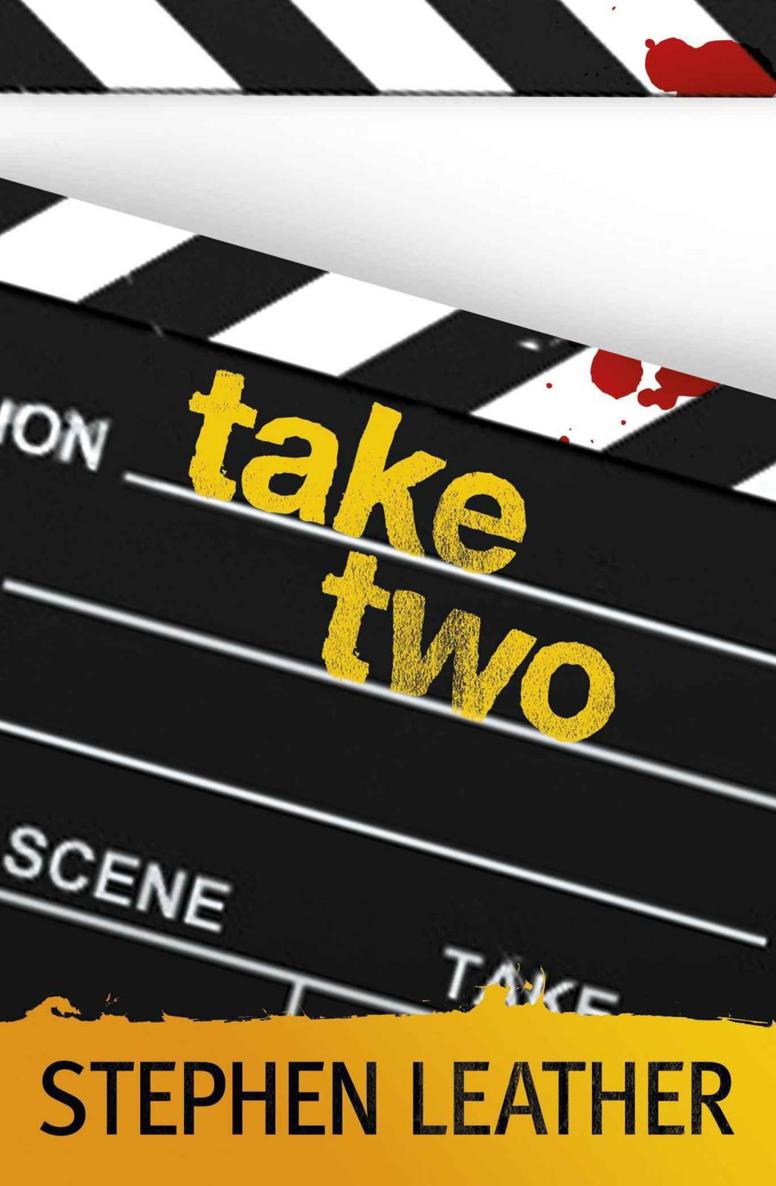 Carolyn Castle is one of the most famous faces in the UK - a soap opera star known to millions. But when she witnesses a gangland killing she has to ask herself if her fame could be the death of her. The killer is charismatic gangster Warwick Richards. A man more than capable of killing again to protect his secret. But does he know that Carolyn saw him commit murder?

The woman took a long, slow drag on her cigarette, drew the smoke deep into her lungs, and held it there for several seconds, relishing as she always did the warmth of the nicotine as it spread through her system. Then she exhaled just as slowly, her lips slightly pursed, and blew smoke up at the ceiling. She was Diana Bourne, she was rich, she was successful, and she was standing outside a bedroom door on the other side of which two people were having energetic and very vocal sex. Diana was pretty sure the male half of the copulating couple was her husband. As she was standing outside her own bedroom door, that seemed a fairly reasonable assumption.

She dropped what was left of the cigarette on the floor and ground it out with her Prada black high-heeled shoe. Everything she was wearing had a designer label. Versace suit.  Gucci blouse. Louis Vuitton bag. Cartier watch. Chanel perfume. Designer labels were Diana’s camouflage and sometimes her armour.

She threw open the door and strode into the room, stopped under the gold and crystal chandelier and put her hands on her hips. ‘My husband and my best friend,’ she said bitterly. ‘If it wasn’t such a cliché it’d be almost funny.’  She shook her head and then reached into her bag and pulled out a gun.

Her husband was lying on his back, his head supported by two pillows. The girl had her back to Diana, but the waist-length lustrous blonde hair was more than enough to identify Fiona Hale. She had frozen mid-stroke, but then rolled off the bed, grabbing at the duvet and pulling it off the bed with her. As she wrapped it around her, Diana’s husband used his hands to cover what was left of his erection. She smiled ruefully. ‘Oh come on now Simon, suddenly you’re shy,’ she said and took aim at his groin.

‘Yeah, I’m an adult. An adult who’s been betrayed by her husband. I’m pretty sure any jury’s bound to consider it a crime of passion.’ Her finger tightened on the trigger.

‘Diana, it doesn’t mean anything. It was just…’  Fiona began to shake and was unable to finish the sentence.

‘Sex? Fun? A game?  What was it exactly, Fiona?’  Diana pointed the gun at Fiona and she hugged the duvet tighter as if she thought it would offer some protection against a bullet. ‘How long have I known you Fiona?  Fifteen years? You helped me start my company, you’ve been my friend, my advisor, my rock. And you screwed my husband?’

‘It didn’t mean anything,’ Fiona repeated, close to tears.

‘Maybe not to you, and maybe not to Simon there, but it bloody well means something to me.’ She pointed the gun back at her husband.  ‘So, would you throw yourself in front of him? Would you take a bullet for your lover, Fiona?’

‘He’s not my…’  Again she left the sentence unfinished.

‘What is he exactly, Fiona? He’s my husband, but what is he to you?’

Simon shook his head, ‘Diana, please, this is…’

Diana held a finger to her lips. ‘Hush, darling,’ she said. ‘I’m talking to Fiona.’

‘You know you’re not going to use that,’ he said.

‘Darling, you are so wrong.’ Her finger tightened on the trigger and he flinched. Diana laughed.  ‘How sad are you?’ she said. ‘Do you want to know something, Simon? Do you want to know what I was doing today while you were screwing my best friend?’ She grinned. ‘Well, first of all, I met with my solicitor and you’re about to be served with divorce papers. Then I cleared all the money out of our joint bank accounts. And then I convened a board meeting of our company and we unanimously agreed to terminate your contract. So you’re broke and unemployed and after my solicitor has got through with you, you’ll be homeless. All in all, I’ve had a pretty productive morning.’ She looked over at Fiona. ‘He doesn’t look quite so attractive now does he, babe?’

‘Of course you do, babe. Just let me shoot my lying, scheming bastard husband and then you can be on your way.’ She swung the gun back at Simon, aimed at his stomach, and pulled the trigger.

The sound was deafening and Fiona screamed. Simon clutched at his chest, his eyes wide and staring.  Fiona pulled the quilt up to her neck as her whole body started to tremble.

Simon patted his hands over his chest. There was no blood, no wound.

Diana laughed and wagged the gun at him. ‘See darling, there was nothing to worry about,’ she said.  ‘I’m firing blanks, just like you.’

There was silence for a few seconds, though Diana’s ears were still ringing from the shot. Then there was a sudden shout from behind her. ‘Cut!  Brilliant everyone. That’s a wrap!’

‘Well, thank God for that,’ said the man on the bed. A young man in an Arran sweater hurried over and handed him a silk robe. ‘Please reassure me that no one could see my willy,’ he said, wrapping the robe around himself.

‘Not unless they were using a magnifying glass, darling,’ said Carolyn Castle, the actress playing the part of Diana. She kept the gun pointed down at the floor until Danny Brett, the former soldier who worked as the production company’s armorer, took it from her, made it safe and placed it in a steel case.

‘Bi-atch,’ snarled the man. He was Sebastian Lawton, her husband on the show but, in real life, as camp a homosexual as you’d meet in Soho on a Saturday night. He was in his sixties but had paid for enough surgery, Botox and hair transplant work that he could pass for fifty and was a good enough actor to come across as the ultimate ladies man.

‘Diana, you can pop back to make-up,’ the director said. ‘We’ll do close-ups on Seb and Andrea, so you’ve got time to get your hair fixed.’

Carolyn turned around and fixed him with her steely green eyes. ‘Darling, one, my name is Carolyn and two, what exactly is wrong with my hair?’

Jake Harrington jumped out of his director’s chair and hurried over to her, arms outstretched. ‘Sorry, sorry, sorry,’ he said, hugging her. ‘It’s just you are always Diana to me. I’ve watched Rags To Riches from the very first episode.’ He kissed her on the cheek. ‘If it makes you feel better, we’ll get Danny back and you can shoot me here and now.’ He released his grip on her. ‘I’m sorry. Really.’

Carolyn stroked his chin.  ‘Darling, half the fans who ask for my autograph get upset if I sign as Carolyn,’ she laughed. ‘They want Diana’s signature, not mine. A lot of them have never heard of Carolyn Castle. To them I’m Diana Bourne, end of story.’

‘But I’m your director, and if I ever confuse you with your character again you have my permission to knee me in the crotch, at the very least.’

Carolyn smiled sweetly. She knew he was only over-reacting to make her feel good but she appreciated that he’d made the effort. ‘And the hair problem?’

Harrington made a flicking gesture with his hand. ‘It’s more of a lighting problem,’ he said.  ‘We’re shooting you with quite a bright light behind you and its shining right through your hair so we’re seeing a bit of scalp.’

‘A bit of what?’ said Carolyn, horrified.

‘The outline of your scalp, darling, it’s nothing to worry about, Tracey will take care of it.’

Harrington laughed but Carolyn saw the nervousness in his eyes. ‘Your hair is lovely,’ he said. ‘You’re lovely. Now get yourself over to make-up so I can get started on Seb’s close-up.’

Carolyn settled into the chair and stared at her reflection in the mirror in front of her. She turned her head slowly to the left and then to the right. ‘Tracey, is my hair thinning?’

‘Of course not,’ said Tracey, who was rooting around in the blue plastic fishing tackle box that she used to hold her brushes.

‘Don’t bullshit me, Tracey, I need an honest opinion.’

Tracey straightened up and ran her hands through Carolyn’s hair. Tracey was in her early twenties, with long natural blonde hair and a tight figure that came from genetics rather than time spent in the gym. ‘It’s fine,’ she said.

‘It’s fine. Fine as in thin. You don’t have thick hair, Carolyn, you never have.’

Carolyn cursed under her breath.

Tracey put her hands on Carolyn’s shoulders. ‘You’ve got great hair,’ she said.

‘For any age. But yes, it’s fine. And Jake said the light was shining through it, which never looks good. But it’s easy enough to put a bit of thickening through it.’ She took a step back and looked at her reflection. ‘You might want to start thinking about a wig.’

‘Half the actresses on EastEnders have wigs,’ said Tracey. ‘The older ones, anyway.’

‘Old?’ Carolyn sighed and leaned towards her reflection. She examined the crows feet at the corners of her eyes. ‘Do I need my eyes doing again, do you think?’

‘Your eyes are fine. Everything’s fine.’

‘Including my bloody hair?’

One of the runners popped his head around the door. ‘Miss Castle?’

Carolyn twisted around to look at him. He was a good-looking boy on his gap year, the son of one of the network producers. ‘Yes, Harry?’

‘Mr Harrington says he doesn’t need you for the rest of the day. They’re having camera problems.’

‘Thanks, sweetie. Can you dig up my driver for me?’

Harry flashed her a beaming smile and closed the door.

‘Well, Tracey, it looks as if we won’t be needing the thickener just now,’ said Carolyn. She looked at her watch.  ‘You know what, I think I’ll give Eddie a surprise.’ She gave Tracey a sly smile in the mirror. ‘Do you think you could use your magic brushes and give me some seductive warpaint?’  Eddie Hunter was Carolyn’s long-time boyfriend, and had been since soon after her third divorce.  Eddie was a musician, a talented pianist, but hadn’t had any work fixed up that month so he’d been hanging around his Chelsea flat at a loose end.  She’d been working pretty much non- stop all week and had barely spent any time with him so she figured her early cut would be the perfect opportunity to put that right.