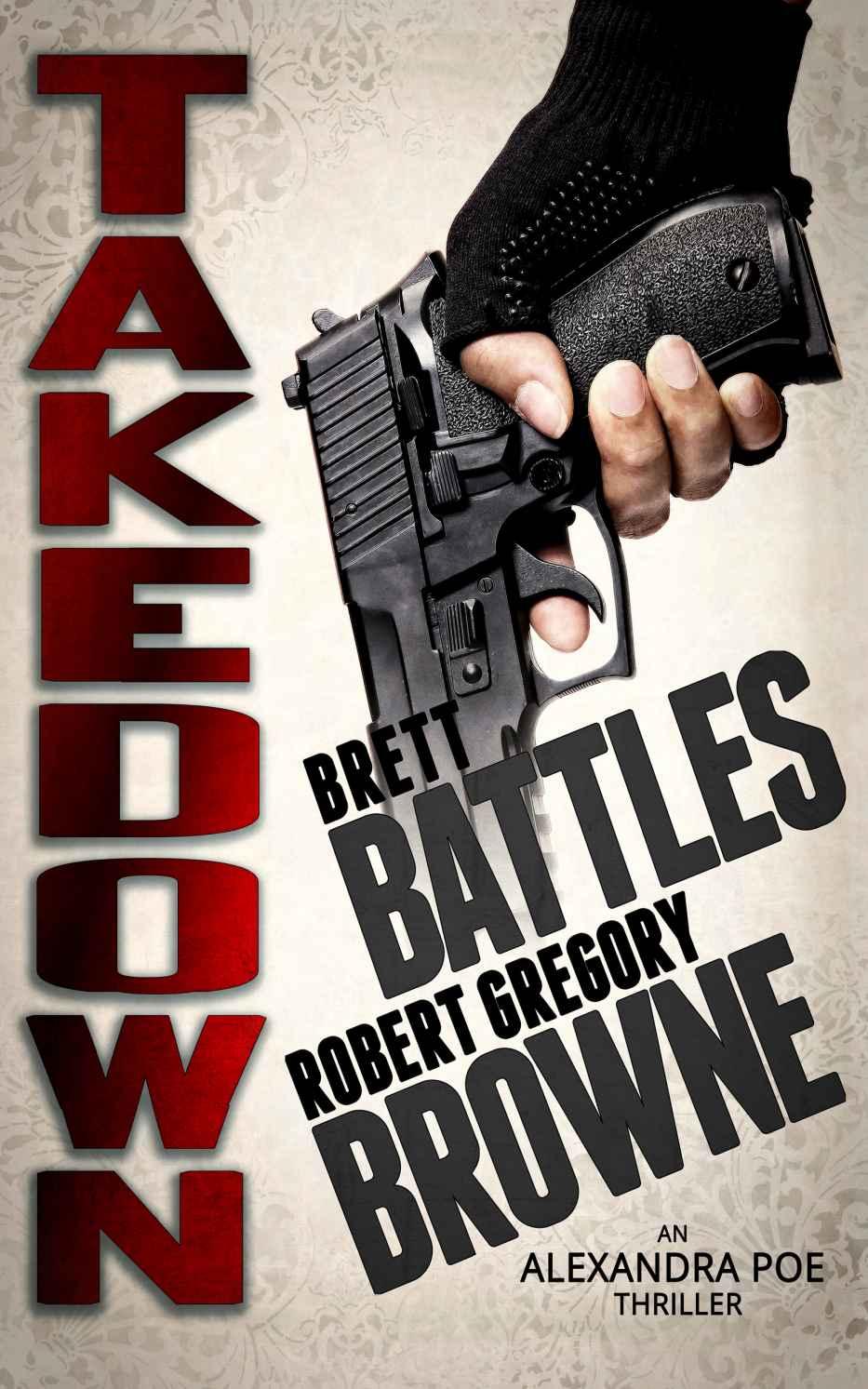 After an op in Istanbul goes sour, all Alexandra Poe wants is a little down time, and a chance to finally sell off the family vacation home in Key Largo which carries too many painful memories.

Instead, she finds herself on a private Bahamian island, working with Deuce and Cooper to relieve a human rodent of some very sensitive codes, and to take down one of the world’s most notorious terrorists. Just another job for Stonewell International. Or is it?

No part of this publication may be reproduced, stored in a retrieval system, or transmitted, in any form or by any means, electronic, mechanical, photocopying, recording, or otherwise, without prior written permission from the author.

Published in the United States of America by Braun Haus Media

T
HEY
CHOSE
A
Wednesday in March for their day of atonement.

Malina had told him that people rarely called in sick on Wednesdays, and the early morning commuter lines into Times Square were bound to be elbow to asshole—standing room only.

“When the blast is triggered,” she said, “we’ll send a message to the world it’ll never forget.”

Ivan didn’t argue. He had only agreed to do this because he was in love with Malina. He didn’t hate America the way she did, and he hadn’t really cared when Kosovo declared its independence five years ago—he was barely thirteen at the time. But Malina was passionate about her beliefs, and that passion translated into a dynamic, all-encompassing charisma that Ivan found hard to resist.

The night before, she had said, “We should be proud, Ivan. What we’re about to do will change everything. Everything.”

Ivan wasn’t so sure, but who was he to challenge her? He had never been much of a thinker, and when he tried, he too often found himself unable to articulate the confused thoughts he did have. Better simply to shut up and listen and try to follow along as Malina lectured him on the dangerous tyranny of the US government and the willful ignorance of its arrogant, self-centered citizens.

Ivan had once tried to point out that
they
were citizens as well, both born to naturalized parents less than twenty years ago, but that didn’t matter to Malina.

“Where and when you were born isn’t important,” she told him.

They may have looked and acted like most young Americans, but they were Serbian by blood, and would forever be linked to a part of the world Ivan had never visited.

And never wanted to, when it came right down to it.

Malina, on the other hand, had been to Serbia twice now. Had gone to Belgrade to visit her uncle Radovan for two summers in a row, and returned to New York full of ideas and plans and that irrepressible passion Ivan found so captivating.

Radovan was a radical Serbian nationalist who believed a conspiracy between the United States and Germany had been instrumental in tearing their country apart, and his desire for retribution was no less potent now than it was in 1999.

Ivan had never heard Malina say it, but he suspected it was her uncle’s idea to bomb the subway train. She and Radovan were in regular contact, and it was Radovan who had told her whom to trust and what parts to buy and how to assemble the bomb, which looked nothing like that crude pressure-cooker device those two fools in Boston had built.

There was talk of cell phones and arming switches and a lot of technical terms that flew right past Ivan’s ever-stymied intellect, but he didn’t suppose the mechanics of the thing mattered all that much. What counted was what it could
do
.

And he knew it would not be pretty.

Part of him didn’t relish the idea of hurting so many people, but Malina had gone to great lengths to assure him that those who would die this morning were far from innocent. Their own complacency, their stubborn unwillingness to see, their continued apathy toward a government that manipulated and controlled and spied and murdered, made them just as culpable as the highest placed government official.

“Their hands,” she told him, “are stained with the very same blood. The blood of the Serbian families that were slaughtered by NATO bombs.”

Ivan sometimes wondered how much of this was Malina speaking and how much was Radovan.

But it probably didn’t matter. Her mind was made up and he wasn’t about to try to stop her.

“The only way to awaken these people from their self-induced stupor,” she continued, “is to show them exactly how it feels to watch your loved ones die.”

They drove to one of the smaller rail yards in the city, the ribbons of track and rows of dormant subway trains illuminated by a few tall lampposts and an anemic wash of moonlight.

Shortly past three a.m., Malina pulled her dilapidated Ford van to a curb at the far side of the lot, grabbed her backpack, and reached behind her for the aluminum suitcase she had assembled just prior to the drive.

“Let
me
,” Ivan said, then quickly climbed out and rolled the side door open.

“Careful,” she told him as he stretched an arm toward the case. “Be very careful.”

He knew by the almost imperceptible tremor in her voice that she was nervous. He himself didn’t feel nervous so much as pumped full of adrenaline, his hands and body unable to keep still, needing to move. But he froze at her command, willed himself to be calm, then took hold of the suitcase handle and carefully lifted it out.

Moments later they were walking along the perimeter of the yard, looking for the hole in the chain-link fence that Malina had made two days earlier. Ivan kept the suitcase at his side, doing his best to curb the natural instinct to let his arm swing, the nerves he had dismissed only seconds ago now a mild but incessant buzz in the pit of his stomach.

“Where is it?” he asked, suddenly wishing he hadn’t volunteered to carry this thing.

“Almost there,” Malina said, illuminating the fence with her miniature flashlight as they moved. She had used a pair of wire cutters from Ivan’s garage to clip the links, readying the fence to be bent back for easy access to the yard.

When they came to the seventh fence post, nearly a block from where she had parked the van, she slowed and softly counted, stopping when she got to ten.

Studying the fence in the beam of her flashlight, she reached out, grabbed hold of one of the links, and pulled. A small section of the fence split apart, groaning faintly as she bent it back, creating a gap just large enough for Ivan to squeeze through. When she gestured him forward, he looked in at the tracks and the silent train cars and the squat cement building that housed the maintenance shop, and briefly considered telling her he had changed his mind.

What they were about to do was madness.

But the thought disappeared as quickly as it came, lost to whatever demon had made him want so desperately to please this woman.

“Hurry,” she said with a hint of agitation. “Before someone sees us.”

Though the yard seemed quiet—only a single security guard and a handful of repair personnel on duty at this early hour (or so Malina had been told)—Ivan heeded her command and carefully held the aluminum case in front of him as he ducked his head and stepped through the gap.

Malina followed and returned the fence to its original condition. When she was done, she pointed toward the subway trains in the distance.

Five rows, side by side.

“They’ll all be operational in less than three hours. Any one will do.”

Being offered such a responsibility didn’t sit well with Ivan. It forced him to think about the people who would occupy that train, each with a life that—barring the presence of a beautiful Serbian-American anarchist—was not all that different from his own. How many husbands and wives would sleep alone tonight? How many children would wake up tomorrow without a father or a mother? All because of the choice he’d made.

He pointed to the middle row.

“That one,” he said, and started forward, wanting to get this done and be gone. He would struggle with his conscience later. Let Malina soothe him in bed.

She was very good at soothing him.

They moved together through the darkness, Malina’s flashlight lighting the ground in front of them. The last thing Ivan wanted was to stumble with this suitcase in his hands.

Little Bird (The Tangled Series) by Gaines, Liza
Out of Mind by Jen McLaughlin
88 Days to Kandahar: A CIA Diary by Grenier, Robert L.
The Paladin by Newman, Ken
When the Body Says No: The Cost of Hidden Stress by Maté, Gabor
April 6: And What Goes Around by Mackey Chandler
The Second Murray Leinster Megapack by Murray Leinster
The Minder's Bond (Farthane Stories) by English, Kary
Spooning Daisy by Maggie McConnell
The Wangs vs. the World by Jade Chang
Our partner