Read Taken By Him (Obsessed With Him, Book Four) Online

Taken By Him (Obsessed With Him, Book Four) 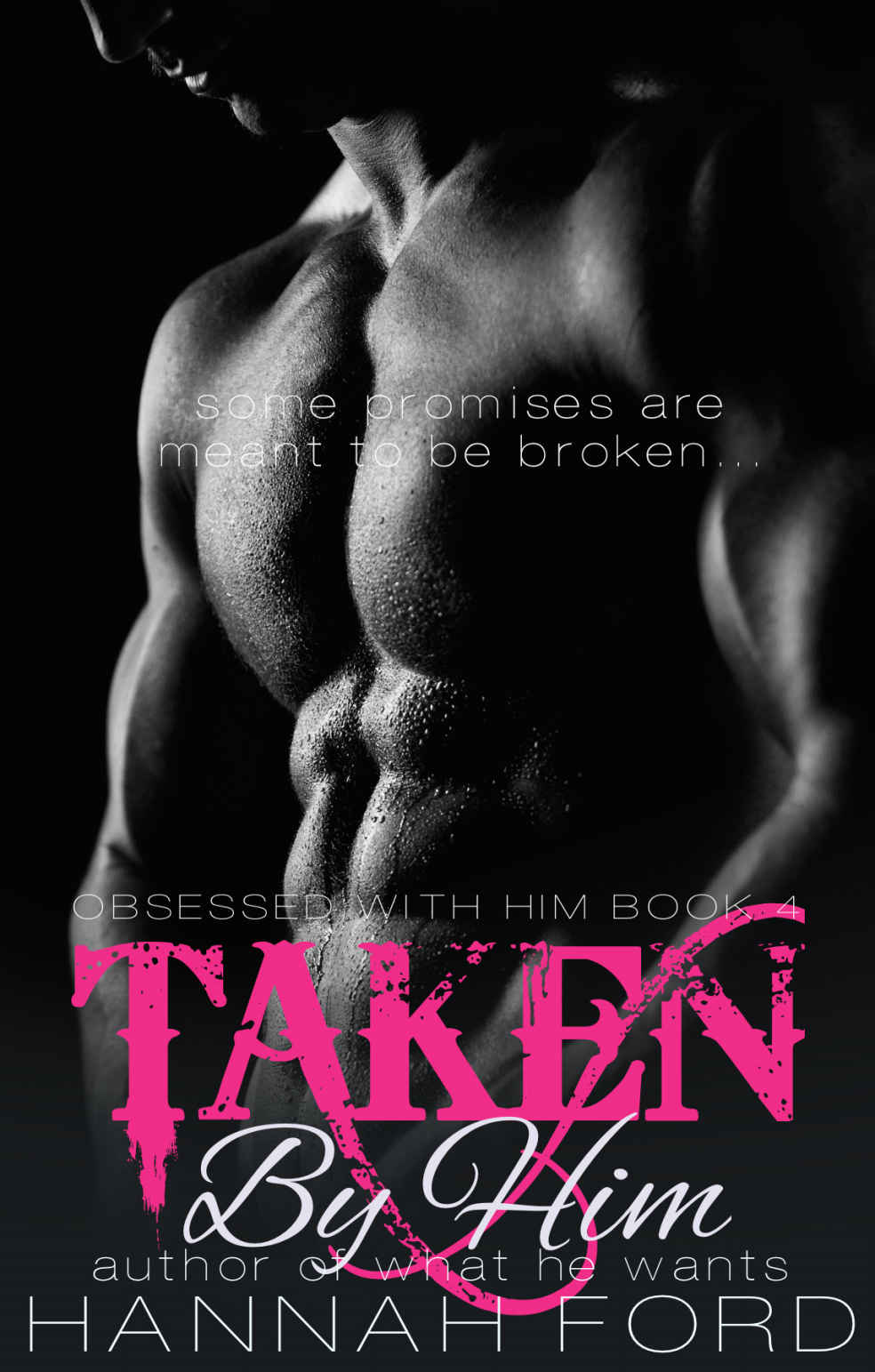 (Obsessed With Him, Book Four)

This book is a work of
fiction, and any resemblance to any persons, living or dead, is entirely
coincidental.

All characters
depicted in this book are eighteen years of age or older.

The next thing I knew, Colt was calling my
name, pulling me back from the blackness that had briefly pulled me under.

“Fuck, Olivia, what the hell happened?”

He pulled me into a sitting position from where
I was slumped over on the floor and grabbed my chin, forcing me to look at
him.

Who did this to you?”

He turned my arm over in his hand and
looked at my wrists, his eyes widening when he realized I’d done it to
myself.

He reached behind him and pulled his shirt off,
wrapping it around my wrists in an effort to stop the bleeding

My breathing was being to return to its normal
rhythm as the initial shock of seeing all the blood began to fade.

“Stay here and do not move.”

I nodded, too weak to argue.

He returned a second later with a first aid kit
and a bottle of water.

He opened
the first aid kit and then raised my hands up over my head, holding the fabric
of his shirt against my wrists tightly, applying pressure to my cuts.

“Do I need stitches?” I asked.
“Depends on if I can stop the bleeding.”

Everything inside of me was screaming to push him away, to tell him to
leave me alone, that I didn’t need his help. I was angry with him, angry with
him for kissing me, for causing me to lose my mind, to be driven almost insane
with lust for him.

I would have let him fuck me, right here in
this room.

But he’d rejected me.

He didn’t want me.

I’d broken my promise to Declan, a promise I’d
kept all these years, for a man who couldn’t have given two shits about me.

As soon as
I was feeling better, I was out of here.

Those dark eyes were locked on mine as he held
my wrists so tight I couldn’t move, the tension between us crackling so
intensely I could almost see it, like a taut electric wire joining us
together.

After a few more minutes, Colt pulled my arms
down and began unwrapping his shirt from around my wrists.

I winced when I saw what I’d done to
myself.

I would
have scars.

The wounds were still leaking blood, but it had
slowed considerably.

Colt reached into the first aid kit and grabbed
an antiseptic wipe, ripping it open with his teeth.

“This is going to sting,” he said, no trace of
sympathy or regret in his voice, just a warning that what was about to happen
was going to hurt.

But even though
the tone in his voice was devoid of emotion, he was gentle as he began carefully
cleaning my wounds.

“Do I need to go to the hospital?” I asked, not
sure I wanted to hear the answer.

They meant filling out paperwork with spaces for addresses and names of
next of kin.

Hospitals meant
doctors who wanted to send you to talk to social workers, stays in psych wards,
and huge bills I would never be able to pay.

And that didn’t even include the actual medical
part of the whole thing, which meant needles and stitches and shots and
monitors.

“I can fix it with a butterfly stitch.”

I went to pull my arms
away from him, but he held my wrists tight.

I watched as he finished with the antiseptic and began unwrapping a
band-aid.

It looked like a normal
band-aid except the two sides were held together by some kind of elastic.

He placed one horizontally over one of
my cuts, and the skin tightened around my wound.

It was slightly uncomfortable, and I winced and
averted my gaze.

Once I stopped
looking, I instantly started to feel better.

My head stopped feeling so light.

I didn’t know if it was because the
bleeding had stopped, or because I’d been getting woozy looking at what I’d
done to myself.

“I think I passed out,” I said, before
remembering Colt didn’t deserve to know anything about what had happened to me.

He didn’t say anything.

I glanced up at him.

I wanted my eyes to be trained on something
other than my wounds, but the last place I wanted my gaze to land was on him.

But I couldn’t stop.

It was like he pulling me toward him with some
kind of invisible force.

His forehead was knotted in concentration, and
he bit his bottom lip just a tiny bit as he continued placing the bandages on
my skin.

His eyes were dark, his displeasure with me
written all over his face.

When he was done with the butterfly
band-aids
, he reached for a roll of gauze and wrapped it
around my wrists, fastening each side together with medical tape.

Once he’d placed the last piece of tape, he
placed everything back in the first aid kit and then he stood up.

“Can you stand up?” he asked, holding his hand
out to me.

His hand wrapped around mine, and I instantly became
woozy again.

Not from the blood
loss or the cutting, but from Colt’s touch.

I hated the effect he was having on me,
hated that he could make me feel this way.

And it made
me both attracted to him and furious with him at the same time.

A rush of heat overtook me as I remembered what
it had felt like, Colt’s tongue in my mouth, his hands on my body, the scent of
his cologne, the faint taste of alcohol on his breath, how badly I’d wanted him
inside of me.

I couldn’t help it.

I wanted him to kiss me again.

But instead, he shook his head.

He turned my hands over in his, looking at the bandages he’d just placed
on me.

His face softened, and I saw
something in his eyes.

I couldn’t be sure.

“You’re not doing this anymore.”

The concern was gone from Colt’s face,
the flash of it so brief I wasn’t even completely sure if it had been there at
all.

Now all that was there was a
steely determination.

“I’m not cutting myself anymore?” I repeated
incredulously, and then laughed.

He picked up my bag, rummaged through it
until he found my razors,
then
slid them into his back
pocket.

Then hoisted
himself
up until he was sitting on the side of the desk, his
legs dangling over the side. “That’s over, Olivia.

I’m not fucking around.”

“You do realize that it’s not that easy,
right?”

He looked at me again, and a shiver ran up my spine.

“You will not cut yourself again.

Something about his tone, about how commanding
he was being with me, made butterflies swarm my stomach.

I thought about how he’d dressed me in
my tiny little outfit, how he’d held my hands down at my sides and let his eyes
rake up my body.

“You’re not in charge of me,” I said defiantly,
raising my chin in the air, daring him to contradict me.

He stood up and crossed the room to the
bar in the corner, poured himself a drink and took a long gulp.

He shook his head, like he couldn’t
believe he was being forced to deal with me.

“You’re the
one you ran out of here when you found out I was a virgin.

Talk about childish and immature.”

His hand tightened around the glass he was
holding and I saw something akin to fury blazing in his eyes.

But what did he think?

That I was just not going to bring it
up?

Now that my immediate medical
concerns had been taken care of, I was pissed.

How dare he send me such horribly mixed
signals?

He’d dressed me up in this
skimpy outfit, he’d made it perfectly clear that he liked what he saw, and then
he started kissing me, touching me, making me crazy with want for him.

And then once I decided to give him what he
wanted, he stopped.

Just because I was virgin?

Talk about fucked up.

He took another long pull of his drink,
draining the glass.

“You don’t want
your first time to be with me.

“Because you just don’t.”

He closed his eyes tight, and bent over
the bar, resting his hands on the side as he hung his head for a moment.

His broad shoulders looked tensed and
knotted, and I had to resist the urge to go over there and comfort him.

I thought about what I’d seen in the office
earlier, how I’d heard him fighting with his uncle, how Colt had slammed his
hands against the desk.

He
looked like a lost kid now, instead of the sexy, confident man who’d held my
hips earlier while I’d danced for him, telling me how to move, how to undress
for him.

I took a step toward him, no longer able to
keep myself from trying to provide some comfort to him the way he’d just done for
me.

But before I could, Colt turned around.

You’re done as a cocktail
waitress.”

It was only fair.

I’d worked here for the
night,
I should get the money that was due to me.

I wondered how much it could be.

A hundred bucks could last me a
while.

A hundred bucks was enough
for a food and a few nights in a cheap motel until I could figure out what to
do next.

I blinked at him in disbelief.

“You’ll get paid at the end of the week, for
the week.”

“You’ll be my secretary.”

“I don’t want you working here as a
waitress.

You can work in the office with me.

I need someone to help with the
paperwork.”