Read Taken In by the Pack: Second Chances Online

Taken In by the Pack: Second Chances 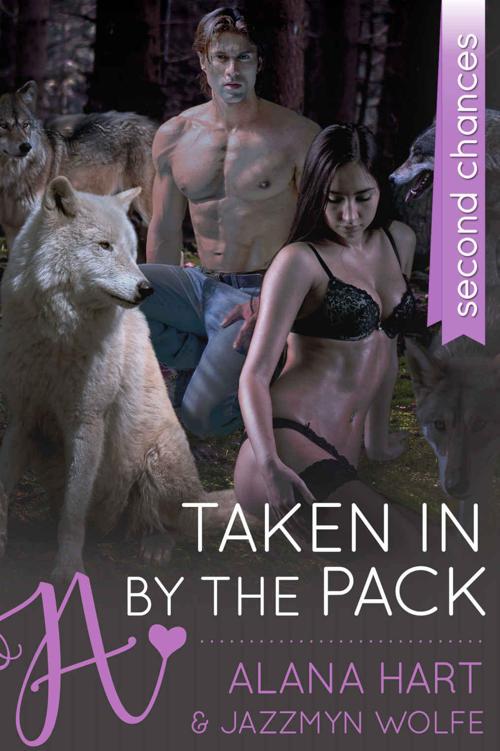 Taken In by the Pack

All rights reserved worldwide. No part of this publication may be reproduced, distributed or transmitted in any form or by any means, or stored in a database or retrieval system, without the prior written permission of the author.

This book is a work of fiction. Names, characters, places and incidents are products of the author’s imagination or are used fictitiously. Any resemblance to actual events, locals or persons, living or dead, is entirely coincidental. Please note that this work is intended only for adults over the age of 18 and all characters represented as 18 or over.

I moved to one side and held the door open, and Bryson followed close on my heels; even still, in the close quarters of the entryway, he brushed against me as he went past, and it made my breath catch, as tingles radiated outward from the contact. Once we were both inside, I closed the door and locked the deadbolt out of habit. I let my book bag drop next to the door, since there was something much more immediate to deal with than putting it in its usual place. I remained facing the door for a long moment, collecting my thoughts.

I finally turned, and nearly jumped back — not that it would have done me much good, I was almost touching the door behind me as it was — to find Bryson no more than a handful of inches away from me. I looked up into his face, wide-eyed. My breath came more quickly, and an aching knot formed in my belly. I could feel the heat radiating off of him, and my own body seemed to grow hotter to match. Part of me wanted to run in terror, and part of me wanted to throw myself on this magnificent man who would so obviously welcome it.

He lifted his arms, clearly with the intent of wrapping them around me, drawing me to him in an embrace. In a snap decision, I ducked a bit and slipped past his arm before it encircled me. I wasn’t quite ready for that, not just yet at least. I wanted my head to stay relatively clear for at least a few minutes. There would be plenty of time to get lost in the moment with him,
after
I got some answers and
if
I decided that was what I wanted after I had those answers.

“Uhm. I need to — to go change. I was just at the gym.” I plucked at the hem of my shirt, as if that would somehow clarify my meaning. Of course, I hadn’t worn these clothes there, and I’d showered before I put them back on, but there was no need to tell him that. I just needed an excuse to put some distance between us for a minute.

He frowned slightly, and there was a deep hurt in his eyes. Was that a look of rejection? Did he think that was an answer on my part, a refusal? He pushed the hurt aside quickly though, his face crinkling up in a mockingly lecherous grin. “I could come help you change if you want?”

I rolled my eyes, giving him an exasperated look. “I think I can manage to change my clothes by myself. I have been managing for quite a few years now on my own, anyway. And besides, if you tried to help, I don’t think the new clothes would be likely to make it on any time soon.” I began to step backwards slowly as I spoke, putting more space between us as I headed toward my bedroom.

“Well, sure, that’s the point.” He grinned more broadly.
Damn, he’s sexy when he grins like that, with his eyes all lit up and
— I stopped that line of thinking in its tracks.
Not. Helpful.

I scrunched my face up at him, kind of like an annoyed version of a duck-face. “Oh, you’re impossible. Just have a seat,” I waved a hand to indicate my threadbare couch, “and I’ll be back out in a couple of minutes, okay?”

He sighed, shoulders slumping somewhat, but nodded. “Alright, alright. Just don’t take too long, yeah?” How could a young man so obviously used to being in charge, to being powerful in every way that mattered, look so incredibly pitiful at such a minor disappointment?

I bit my lip, and just nodded shallowly in response, before turning to flee into the sanctuary of my bedroom, closing the door firmly.

To Stephanie, for all your help to make this book the best it could be.

To Gabriel and Olivia, for helping to keep me sane.

And of course, to Jess, for simply everything.

Alana Hart’s newsletter is the absolute best way to stay up to date with new releases, free books and special offers from Alana Hart.

Would you like to receive Alana Hart’s new releases for FREE, in exchange for an honest review of 20 or more words?

If you’d like to be notified of Jazzmyn Wolfe’s new releases and special offers,

I looked down at my Prius’s dashboard clock, cursing silently to myself as I screeched into a spot in the crowded commuter parking lot. I was late, and Angie was going to be annoyed. Not that we’d actually be late for class, but she always wanted to be in her seat at least fifteen minutes early.

So ridiculous. But she helps keep me on track, I suppose
, I thought with a sardonic sigh. Angie had been something of a lifeline for me since we met during orientation.

I grabbed my book bag and practically sprinted for the plaza where we normally met up. To my amusement and annoyance, I could see her checking her watch as I turned the corner and she came into view. I picked up my speed a bit more, waving to try to catch my best friend’s attention.

“Adalyn! About dang time!” she called as I drew closer.

“Oh come on, Ang, we’ll still make it with a good ten minutes to spare,” I protested. Angie sighed, and I had to bite back on an affectionate grin.

We hurried across the courtyard, but just as we were about to depart onto one of the walking paths between buildings, I caught sight of someone I never expected to see again; it drew me up short, and I nearly stumbled. Angie kept going for a few steps before she noticed I had stopped, and had to circle back.

I couldn’t answer; I barely even heard her. For a long moment, I thought — hoped — that maybe I was mistaken? But no… his hair was longer now, his shoulders much broader, he was more muscled in general than when we’d dated in high school, but it was definitely him. It was Bryson Morneau, there was no doubt about it.

My first love, my only love, who had left me devastatingly brokenhearted when he simply disappeared without a word. It felt like someone had wrapped a tourniquet around my chest; I couldn’t breathe, and my heart pounded painfully until I feared it might burst.

Angie frowned, following the direction of my fixed gaze. Her frown only deepened when she saw who I must have been fixated on; there was no one else in that particular direction.

“Ugh. Stay away from him, Adalyn, you’re way too good for him, even if he is gorgeous.”

“What?” I tore my eyes away from him to look at my best friend, confused.

“That guy’s supposed to be dangerous or something. Bad reputation, you know? Everyone knows to keep their distance from him.”

“Dangerous? Bryson?” I was shocked; he had been such a sweetheart when we’d dated; it was one of the things that had attracted me to him in the first place.

Angie looked at me sharply. “You know him?” She said it with the kind of surprise or even disgust she might have used if I’d said I knew a filthy hobo in the park yelling at a tree.

As I looked back towards Bryson, he stopped, looking perplexed; he lifted his head as if he had caught a whiff of something unpleasant, and glanced around. He seemed to focus right on me. It made me uncomfortable in strange ways. “Yeah,” I mumbled, “we uh… dated. In high school. Come on, we’re gonna be actually late if we don’t get going.”

Mostly, I just wanted to escape his apparent focus. Had he recognized me? Did he even remember me? Surely he must have just been reacting to my staring at him.

I grabbed Angie’s hand and tugged her hurriedly down the path towards the hall our first class was in.

Despite my initial tardy arrival and the delay that spotting Bryson had caused, we still made it to our seats with a couple of minutes to spare.
I may as well have just skipped this class; there is no way I am going to be able to concentrate on Professor McBoring’s lecture after that
, I thought cynically. My mind was still far too focused on the courtyard and that all-too-familiar face.

Not only was I unable to concentrate on that class, but the remaining two classes that day were almost as much of a wash, not to mention the time in between that should have been spent studying. All I could think about was the painful pressure in my chest, and how he looked — so familiar and so different at the same time. Ang kept trying to get me to focus, but even she gave up eventually.

The
last
thing I needed was a distraction from my classwork. I had never exactly excelled at academics; I was always much better at athletics and other physical activities. Hard work and sheer determination were what got me through high school and then accepted here at Virginia Commonwealth University, not natural talent. I was grateful each and every day to be here. I have wanted to be a conservation ecologist since I was little (though of course I didn’t know that’s what it was called, back then), and I continued to strive with everything I had in pursuit of it.

I was passing, in no small part thanks to Angie’s assistance — she was such a huge blessing — but it was by the skin of my teeth most semesters.

After I gave Angie a hug good bye for the afternoon and got back to my car, I decided that maybe a change of setting would help me focus.

I drove to my favorite coffee shop, a great little local place. It had such a better atmosphere to me — like chilling out in someone’s living room — than the overly-commercialized chain places, and it had better prices, too. It was late enough I didn’t want to drink coffee, so I ordered a hot chocolate and a chocolate chip cookie, and went to settle on the big squishy couch.

Muffins And Mistletoe (A Starlight Hills Holiday Novella) by Dennis, Debora
Lost to You by A. L. Jackson
Shadowboxer by Cari Quinn
The Death of Small Creatures by Trisha Cull
Strapless by Leigh Riker
A Tiny Bit Marvellous by French, Dawn
The Dire Wolf's Mate by Smith, Kay D.
No Turning Back by Tiffany Snow
Haunted Legends by Ellen Datlow, Nick Mamatas
Waiting For You by Higgins, Marie
Our partner