Taken: The Life of Uktesh Book 3 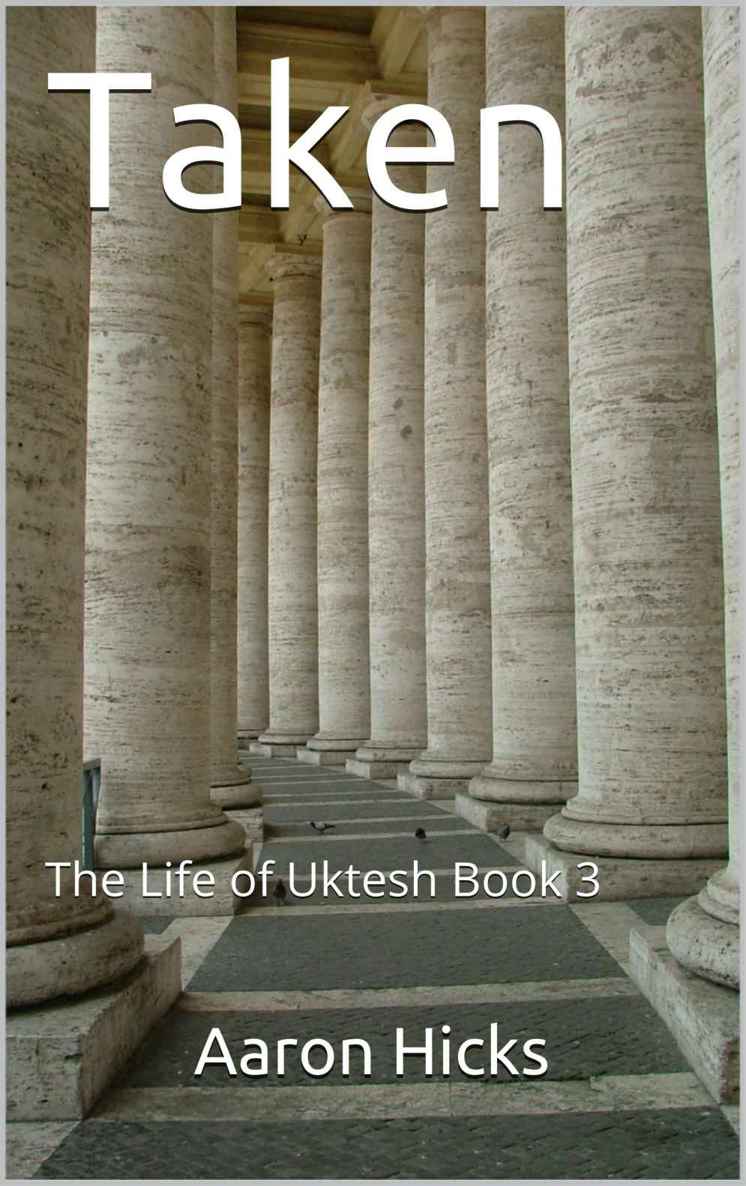 A special thanks to Sara Callanan who edited this mess into something understandable.

To my family who support me emotionally by listening to me ramble on for hours about fictitious characters.

And to Jesus Christ, my Lord and Savior, for all He’s done for me and my family.

Laurilli was in a long hallway full of melee weapons on the right, and hundreds of distance weapons on the left.  There were people along the walls sitting on padded benches, lounging in dozens of small pools, or leaning against the walls or pillars.  They all stared at her in shock, their jaws open in many cases.  She walked forwards toward the end of the room where two bright lights were sitting on golden thrones.

The light on the right radiated as its voice said, “Is this the one?”

The light on the left seemed to pulse with its speech as well when it said, “Indeed, husband she is.”

The lights resolved themselves into two beautiful people.  The man said, “I’ll grant you she has a surprisingly deep latent power.  Should she live to develop her power. It would rival that of our son. She’s not much to look at.  Shouldn’t she be more,” he gestured at her, “everything to be worthy to be the wife of our son.”

The woman said, “She’s wonderful to our son and he loves her. If she dies it would crush him.”

Laurilli thought,
did they just call me ugly?

The woman said, “No child. Just that you are not beautiful.

Can they hear my thoughts?

The woman smiled and said, “Yes. It’s a simple thing.”

Laurilli found herself unable to stop herself from thinking any of the mean retorts she was currently thinking of saying about her looks compared to the woman’s own looks. The man said, “I still don’t think we should meddle any more into the lives of mortals.”

The woman dismissed his argument with a flick of her dainty wrist, “You’ve always been a worry wart Belesh.”

Belesh said, “Now you’ve done it Uketar!  You named me in front of a mortal.”

Uketar said, “She won’t remember this. It is fine.   Child, if you remember do you swear not to tell a soul about this conversation?”

Laurilli gapped and realized that she’d been asked a question, “You’re real?”

Belesh laughed and said, “One for me!”

Belesh roared with laughter, “Two for me!”

Uketar said, “Child we rarely meet mortals, but when we do we like to bet on what they will say or do.  You’ve just asked two of the questions that Belesh bet you would ask.”

Laurilli asked, “How many things have you bet on?”

Uketar smiled and Belesh frowned.  Uketar answered, “That’s one for me, and the whole conversation, of course.”

Laurilli belatedly answered the question, “I won’t tell anyone about this conversation!”  She felt foolish, “You’d asked me earlier if I would…,” she trailed off.

Belesh said, “Child, we’re gods. We can remember an event that transpired two minutes ago.”

Laurilli said, “What am I doing here?”

Belesh grimaced again, “Maybe we should help you.”

Laurilli nodded and said, “Please do.”

Belesh scowled at Uketar, “No, maybe you should ask us to help you.”

Uketar said, “You can’t lead her to ask a question you want.  We’ve already decided to help you. The problem is you’re not a descendant of ours.  All we can do is empower one of our own to save you, but Uktesh is the only one near, and he won’t be able to help you anytime soon.”

Belesh laughed and said, “That boy of yours won’t be able to help himself anytime soon.”

Uketar shushed him and said, “Don’t give away the future or you’ll risk changing it!”

Belesh grinned at Uketar, “It’s not that great a future.  It could stand to change a bit.”

Uketar shook her head and said, “It’s good enough.  That is, of course, assuming we can save our son’s wife.

Laurilli said, “Why do you keep calling him your son?”

Uketar said, “Child you’re just gaining the points for me right now!  I say he’s my son because about sixteen and a half years ago, in the guise of Bela, his mother, I birthed him.  Now, I couldn’t stay in the mortal realm, so I faked my death during childbirth.  In hindsight had I known he would blame himself for my death, I would have done it differently.”  Laurilli didn’t understand the relationship between Belesh and Uketar because Belesh didn’t seem upset in the slightest at this revelation.

Laurilli said, “I thought you were both men.”

Uketar said, “We can be what we choose to be, and originally we chose to both be men.”

Belesh said, “It’s helped when one of us has wanted to have a child. No one thinks that we’re women so if we implant memories of a life lived and then go away, no one thinks a second about it.

Uketar said, “Though we do get a lot of women suddenly pregnant while their husbands are away, or before they’re married, who, ‘had a visit from,’ one of us.”

Laurilli was confused, “So then Uktesh’s mom is you?  Or are you his father?  Or both?”

Uketar laughed and said, “I’m his mother and Belesh is his father.”

Uketar said, “No child, we simply used him as a surrogate father because he was a good man.”

Suddenly the hall was filled with black smoke that resolved itself in a giant red dragon!  Uketar said, “A dark one!”

The dragon roared, “Light ones!”

Laurilli realized who the dragon must be and said, “Wait!  You’re Uktesh’s dragon right?”

The dragon nodded, but halted, tilted his massive head to the side, and said, “Not anymore. I guess I’m your dragon.  Imagine my surprise when I entered you and felt this doorway open.”

Belesh said, “You inhabit her?”

The dragon said, “She still has a spark of life left, though, I doubt I will be able to save it.”  The dragon showed them all of his many teeth and Laurilli realized he was smiling at them.  “My talents lay the other direction, as you know.”

Uketar said, “We can give you the power to save her.”

Belesh said, “No!  If he takes if for himself-” he glanced at the dragon and Laurilli could tell they were having a psychic conversation.

Laurilli said to the dragon, “You’re big.  How do you scrunch to the size of a tattoo?”

The dragon puffed a ring of smoke at her and said, “Magic, my dear.”

Uketar said, “We’ve decided to trust you, dragon. We’ll empower you to save Laurilli. Will you agree to use our power to save her and only to save her?”

The dragon said, “I already told Uktesh I would.”

Belesh said, “Then we’ve not much time to lose.”

Laurilli felt herself pulled backwards and suddenly her world dimmed.

Laurilli woke up, and saw that she was in an unfamiliar room.
Uktesh!
She sat up too quickly and screamed in pain.  Heathyr and Thulmann both burst into the room.  Thulmann quickly unwrapped the binding on her chest and she saw that she was bleeding between her breasts.  “Oh no!  She reopened the wound.  Get Mother Esrun.”  Heathyr ran out of the room, but rejoined them a moment later.

She only had one question, “Where’s Uktesh?”  Heathyr patted her head, glanced at Thulmann, who shook his head slightly.  “Where’s my husband?”

Thulmann said, “Honey, do you remember what happened at Jubay?”

Laurilli said, “Yeah. We were attacked. Uktesh stayed behind to hold them off so we could get away.”  Tears came faster than she could blink them away, “He’s not dead, he can’t be!  I’d know it!”  She tried to spin the ring on her ring finger with her thumb, but her hand didn’t work right.

Thulmann shook his head and said, “He never caught up to us.  If he could have, he would have.  It’s been three days since then. We barely got here in time for Mother Esrun to have a chance to save your life.”  She knew it was true, because it was the first time she’d seen her father cry.
Why is he crying though, he hated that Uktesh was Afflicted.
“There’s more.”

Laurilli couldn’t stop the tears that her father’s tears inspired.  She tried to wipe her nose, but her left arm where the arrow had struck her wouldn’t move so she used her other hand.  She sobbed out, “More than Uktesh?”

Thulmann spoke in a gentle voice, “You got hit early so I don’t know how much you remember, but,” he glanced and Heathyr, who was also crying.

Laurilli couldn’t take it, “But what?”

Heathyr patted her head, “Esolc and Leilani didn’t make it.”

Heathyr leaned in to hug her and Laurilli felt like she would drown from her tears.  She asked, “Pippy?”

Heathyr said, “She’s fine, terribly sad, but healthy and living with us.”

Laurilli reached up to hug her mother, “Hey what?” she began as she tried to lift her left arm but couldn’t.  She lifted her right arm and noticed for the first time that it had a dragon tattoo that moved when she looked at it.
Uktesh’s dragon?

Does that mean Uktesh is really dead?

I don’t know. The last I saw of him he was alive, but about to be captured by the invaders.

Why didn’t you save him?

I couldn’t, not if I wanted to save you too.  Trust me when I tell you, you were literally on death’s door when I got to you.

Heathyr continued to hug her as Thulmann put a gentle hand on her shoulder. His fingers felt strange to her; as if they were inside her arm. He said, “There’s more bad news.”

Laurilli looked at her left side where his hand rested and asked, “Where’s my arm?”

A few days apart from Laurilli

The first thing Uktesh realized when he woke up was that he was on a boat.  The second was that he was chained to a wall.
Any suggestions?
He asked the dragon, before he realized that the dragon had left him, hopefully in time to save Laurilli.  He stood up so that his weight wasn’t on his wrists.  He tried not to dwell on the fact that she was possibly dead. He knew that if she were dead he’d feel her loss.
Wouldn’t I?

He looked around his cell and saw that he wasn’t alone. In the corner was a still form that Uktesh couldn’t tell was alive or dead.  “Hey!” he whispered to the form.  “Hey!  Wake up!”  The man groaned, sat up, and Uktesh saw that it was Royn!  “Royn!  What happened?  Are the grand masters still alive?”

Royn sat with his shoulders slumped.  He didn’t look at Uktesh when he said, “They’re all dead, killed by one man.”

Uktesh couldn’t believe it!  He knew that seeing three ships still floating hadn’t been a good sign, but for all five to die and by one person was too much to believe.

Before he could ask anything else Lord Astiau walked into the room, dressed in golden robes, and casually leaned against the bars of the cell. He had changed drastically since Uktesh had last seen him.  He was worn and tired looking, he hadn’t shaved in days, and he had a patch over his right eye and a long scar that stretched above and below the patch.  Astiau glared at Uktesh with his remaining eye and said, “Well, you’ll be glad to know that my brother has decreed that you’ll live to fight for the glory of the Storm lord, our father.  I am gladdened to know that you will fail and die; you’ll fail and I’ll get to kill you slowly; or you’ll make our family even wealthier than we already are.”