Tales From the Swollen Corpse 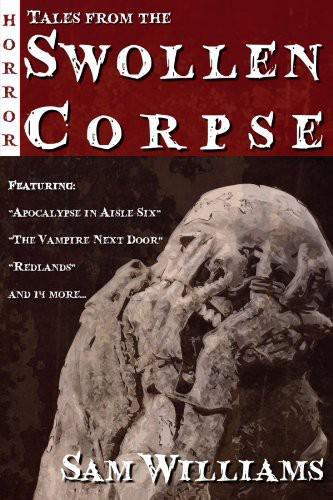 Tales from the Swollen Corpse

Tales from the Swollen Corpse

This book is dedicated to my beautiful wife whose love and encouragement made it possible. As well to my friends over at HMC (especially MOH, DH, and WM) whose encouragement has also been invaluable.

The Vampire Next Door

The Witch in the Basement

A Fade to Blue

It was
f’ing
raining,
f’ing
raining. Heather had asked if I brought a jacket when she had dropped me off, sometimes she’s more of a mom than a girlfriend. I told her I would be working the front, so it didn’t matter.
But nope, it was fucking raining and Barb sent me straight to garden as soon as I clocked in.
It wasn’t
pouring
, really more of a mist. But it was cold, wet, and gray.

I told Dan, if it got any worse I was closing up early, screw Barb. Dan was a good guy to work with. He was a little older and a bit of a burn out, but easy going. It had been thirty minutes since the last customer. I couldn’t leave the register so I had been watching Dan enthusiastically stack the fertilizer bags. Suddenly he stopped and looked up at the sky. I looked to see what he was looking at. Earlier it had been a solid gray, no clouds, just a grayish mist as far as the eye could see. But now there was an orange glow way up there.

“I know, think it’s the sun trying to break through?” I asked.

“Awfully late for the sun to be out.”
Dan shrugged then got back to stacking.

Suddenly the garden register phone rang. It was Barb, There was supposed to be some real bad weather coming in, she said to go ahead and close up and come to the front. I told Dan what Barb said. He said he would lock up but asked if I could go tell the dude in the back we were closing up on the way out.
“Thought we were empty.”
I said.

“Nope, some dude in a suit’s been hanging out in the back by the cinder blocks for an hour.” Dan said.

I walked past the ferns and saplings. Looking up, I noticed the lights were on now. Through the open space above a stack of bricks I saw the brown pants leg of a man standing in the next aisle. Walking around an end-cap displaying grass seed, I saw the man. I knew something was wrong. “Mister, we’re closing the garden center, please bring your purchases inside when you’re ready.” There was a pause,
then
he slowly turned to face me. When he turned completely, I saw something my brain couldn’t accept. The part of me that’s always slow to catch up, wanted to ask if the guy was ok. The smarter part of me took over and started screaming like a little girl.

The thing in front of me was a corpse, and with no mistake, it had been dead for a very long time, until recently that is. This thing was ugly as the suit it had been buried in. I was about to run when I heard laughing from behind me, it was Dan.

“Dude, you are screaming like a… holy shit.” Dan was standing next to me. He was looking at the thing in bewilderment.

I stopped screaming and almost snickered to myself when I looked at Dan. He’s got the same look Digger used give the screen door. Digger was the best dog I ever had but he wasn’t quite right. Sometimes he would come running full speed to come in but the screen door would be shut, bam. After he bounced back a few feet, he would just sit there with his head cocked back and that same look of confusion that Dan’s had.

“Dude, I think we need to go inside.” Dan said without taking his eyes off the thing.

“I think you’re right. You got the keys?” Before Dan could answer the thing lifted its arms to reach for us, baring its rotted teeth. Dan and I needed no other encouragement. We bolted for the door, hollering the whole way. Inside, franticly I reached for the switch to turn off the automatic doors. He and I pushed the doors closed. Dan pulled the keys out of his pocket and locked it.

We stood there looking out the door in terror. A minute went by, then a few more. Fear turned to curiosity. We both pushed our faces against the glass wide eyed, looking for another glimpse of the walking corpse. Then out of the shadows came a foot, then a leg, and it came into view. Even behind the safety of the door we were both ready to split. After a few more minutes it still hadn’t made it to the door.

“I am going to go get Barb.” I said, putting my hand on Dan’s shoulder.

“Cool. I’ll keep an eye on him.” Dan looked mesmerized.

I did a walking-jog past electrical and plumbing up to the front registers. Nicole was working the
self checkout
. She was the only hot girl that worked here. I joked to myself someone must have told her, because she was very aware of it. With no customers, she sat busy texting as usual.

“Hey Nicole, you seen Barb?”
I don’t think my voice reflected the urgency because she ignored me. “Hey!” That got her attention.

“What? She’s over talking to Hector in lumber.” She glared at me before going back to her phone. Probably typing away about how rudely she was interrupted.

I saw Barb walking my direction from lumber. I would recognize the overall and plaid shirt combo anywhere. Nicole and some of the part-time high
schoolers
liked to make cracks about Barb and hated getting her shift. She could be a tough manager but I respected Barb. Unlike some of the other dip shits, she knew her stuff, and unlike the others, if we were
short handed
she didn’t hide in the office. Besides that, she was six foot tall and I once saw her unload a pallet of fifty pound concrete bags in
under
four minutes. Her upper arms were as big as my thigh, and those overalls bore the weight of an immense rack, which for some reason shamefully fascinated me.

“Hey kid, you ready to work now?” She hollered as soon as she saw me.

“Barb, you got to come to the garden entrance, there’s something you need to see.” I must have looked pretty frazzled because her face went straight to concern.

She asked what the problem was and I told her that I just had to show her. As we walked past the registers Nicole hid her phone too slowly. Barb yelled over to her to stock the bags while we’re slow. At the side entrance, I saw Dan. He had turned away from the door and was leaning against a pallet rack. As I got closer, I could see he had been crying, he wasn’t bawling but you could tell.

“What happened?” I couldn’t imagine what would make Dan cry.

Bob was the name of a stray cat that hung around the garden center. I am not sure who named him that. He had been part of this place long before me. I walked to the glass doors and stood by Barb. She was standing there
with
the same mystified look Dan and I shared earlier. Sure enough, not more than a foot from the door was the dead guy. He had the cat in both hands and was digging into it like a kid with a slice of watermelon, guts and muck dripping from his face.

“What the heck?” Barb said, standing there staring at the thing which seemed to be staring back.

It was
creeping
me out, so I turned just in time to hear Nicole call over the intercom:

Barb looked over at me, “Nicole didn’t just…” Shaking her head, she turned around waving us along. “Guys, make sure that doors locked and come with me.”

Sprinting by Barb, I could see two people by the front, they were watching something. I passed old Larry who was on the phone in the customer service counter.

He looked white as a sheet and yelled as I went by, “Hey, you got a cell phone with you? Try calling 911. I can’t get through!”

I shook my head. Going around the corner, I stopped by the two people who turned out to be customers. They were standing and watching, from a safe distance, an insane scene. At a register, Nicole was crying and screaming. She was holding herself up with the help of a checkout counter. One of her legs was stretched out in front. On the ground and latched onto Nicole’s leg by its teeth, was a nasty bloated woman with white eyes. Her grip was relentless and she was stinking up the place. The bloated woman’s legs were twisted and mangled. I could see a trail where she had crawled in. Hector was standing over her yelling and kicking. The kicks only seemed to make the woman’s fat shift oddly and make Nicole scream louder.

“Hector, move away!” Barb’s voice boomed from behind me.

Hector backed away with a look of someone that wanted to help but knew they couldn’t.

“Dude…” Dan was beside me now and saw what I saw. Barb was holding a carpet-kicker from the tool rental display. She walked up to the bloated bitch and calmly pointed the spiked pad like a golfer with their club. She raised it and swung, I am sure she must have intended to take the woman’s head off. Instead she sprayed Nicole with cheek fat, skin pieces and black blood. Nicole was really screaming now.

The One Year Bible KJV by Tyndale
Enslaved by Claire Thompson
A Pigeon Among the Cats by Josephine Bell
Easy Little Lick (Copperline #3) by Sibylla Matilde
The Town Council Meeting by J. R. Roberts
Bare Bones by Kathy Reichs
Dead Voices by Rick Hautala
Charlie Bone and the Shadow of Badlock (Children of the Red King, Book 7) by Jenny Nimmo
Suspicion of Malice by Barbara Parker
The Widow's Friend by Dave Stone, Callii Wilson
Our partner