Read Talk About a Dream: The Essential Interviews of Bruce Springsteen Online

Talk About a Dream: The Essential Interviews of Bruce Springsteen 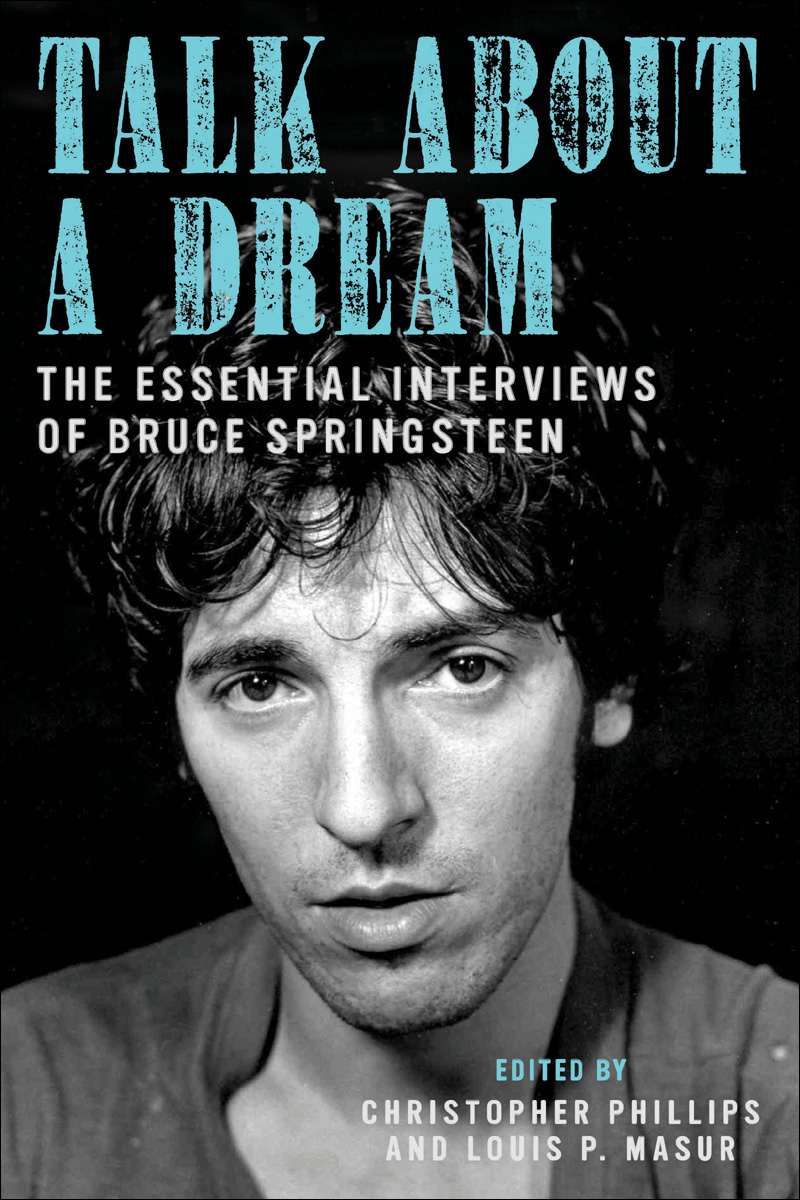 For
Lucy, Ben, and Sophie

A Note on the Editors

Bruce Springsteen’s first album,
Greetings from Asbury Park, N.J
., appeared in January 1973. Shortly afterward he spoke to a reporter for the
Asbury Park Evening Press
who noted how “he mumbled in a characteristically sullen manner.” Asked about his future, Bruce said, “It’s a waste of time to think about it. I’d rather think about my music.”

Forty years later, thanks to that focus on his art, Bruce Springsteen stands as one of the defining artists and public figures of his generation. Time and again his work has rhymed with the times, whether
Born to Run
(1975),
Born in the U.S.A
. (1984),
The Rising
(2002), or
Wrecking Ball
(2012). He has released 17 studio albums, performed before millions of fans worldwide in marathon shows that inspire and thrill, and has become a voice for everyday people struggling with circumstance. “My work has always been about judging the distance between American reality and the American dream,” he told reporters in 2012.

Springsteen has taken that measure not only through his songs but also in dozens of interviews with print, radio, and television journalists. “Talk” is a crucial word in the Springsteen lexicon, and it appears time and again in song lyrics, whether “I talk the way I wanna talk” from
“Out in the Street,” or “I learned how to make it talk” (his guitar, of course) from “Thunder Road,” or “talk about a dream” from “Badlands.” Bruce has been singing and talking about dreams his entire life—dreams of escape, community, love, and life itself. The music is well known and fully celebrated; the talk, however, has never before been collected. Bruce’s interviews provide a running account of the artist’s life—at least those aspects he is willing to discuss, and there are few subjects that he has not eventually addressed. The interviews are key sources for understanding what Springsteen was thinking and feeling at the time.

The interviews gathered here, many of them rare and including never-before transcribed radio and television interviews, provide a multidimensional portrait of an artist of international renown. They are essential to any attempt to understand Springsteen, his work, and his place in culture. In this volume he talks to us—directly and passionately.

For those who have heard Bruce talk about his work only recently, speaking with clarity and authority about his beliefs and experiences, it may come as a surprise that it took him a long time to become master of his own public voice, to teach himself to speak fully and intelligently, with bursts of deep insight and carefree humor. In 1974, Philadelphia DJ Ed Sciaky said to Bruce, “I know you don’t like to talk too much about things.” Indeed, Bruce often stuttered and stammered, deflecting any serious questions to joke and goof around. Typescripts do not always capture the meaning of early interviews because we can’t hear the inflection of Bruce’s voice, the way he swallows his words and tries to sound cool. He is fresh from the Shore, and he wants only to play music and save whatever talking he is going to do for the stage.

The fame that came with
Born to Run
didn’t make him any more comfortable. Through the 1970s and 1980s Springsteen had an uneasy relationship with his celebrity. He mistrusted the considerable hype around him and despaired over “hustling for the record machine,” as he phrased it in “Jungleland.” But if his public voice remained restrained, his musical voice blossomed. His work began to move away from stories of youth and romance to a deeper inquiry into the struggles of survival and the everyday lives of working-class people. Musically, his composing became more taut—coiled songs that unleashed blows to head and heart. Onstage, Bruce spoke ever more openly about personal matters, such as his relationship with his father, and larger social issues such as the plight of Vietnam veterans.

The international success of
Born in the U.S.A
. in 1984 gave Bruce a truly massive public pulpit. He was drawn into discussing the meaning of his work when the president of the United States offered him up as example of the optimistic youth of America. Bruce, in turn, found a new voice, both in his music as well as in his interviews. Partly as a matter of “growin’ up,” partly a result of expanded horizons, Springsteen grew increasingly fluent in articulating his own vision, rather than allowing the Reagans of the world to do it for him. As his work brought him to the world stage, Springsteen’s casual, cool-cat patois of the ’70s fully gave way to meditative, carefully observed expression (with high-pitched laughter interspersed). By 1992, a journalist observed, “Springsteen has little small talk. His answers to questions are all long, often mazy and frequently beyond the reach of punctuation, but they are always answers and do betray the signs of having had some considerable thought expended on them.”

He also took an inward, private turn. He married (and divorced and remarried) and became a father. He and the E Street Band separated, and the gap in interviews from the late ’80s to the early ’90s mirrors Bruce’s own withdrawal, not from the music scene but from larger-than-life iconic status. By the time he reunited with the E Street Band and heeded a call to respond to 9/11, he was prepared for another act in a career in its third decade. Springsteen embraced and enlarged his place in American culture and accepted the challenge of being a voice of conscience and commitment without losing sight of the essential joy of rock ’n’ roll played live and loud. A decade down the road, both his voice and his huge audience are steady.

Reading some of the most incisive interviews he has given over 40 years enables us to chart this development as a musician and as a public figure. These interviews offer insights into everything from the roots of his rock ’n’ roll passion, the meaning of his songs, and his performance onstage, to his childhood memories, his intellectual and emotional awakenings, and his deepening political commitment. Bruce has not spoken with a single, unchanging voice. Through the interviews, we can hear his diction change as he morphs from a young punk on the streets (and boardwalks) to a chastened rocker facing the darkness of fame to a misunderstood, pumped-up symbol of America gone awry to a husband and father and activist who in late middle age sought to make America live up to its promises. Just as his music has changed, so has
he, and only through these interviews can we come to understand Springsteen’s various personas and his ever-evolving meaning.

Born in Freehold, New Jersey, on September 23, 1949, Bruce Frederick Joseph Springsteen, descended from Dutch, Irish, and Italian stock, had a working-class upbringing. His father, Douglas, held a variety of jobs—as a factory worker in a rug mill, a bus driver, and even a prison guard for a spell. His mother, Adele, was employed as a legal secretary. Bruce’s younger sisters, Virginia and Pamela, were born in 1950 and 1962 respectively.

Springsteen attended parochial school at St. Rose of Lima through eighth grade, from 1954 to 1963, and graduated from Freehold High School in 1967. By all accounts he was an outsider, a loner whom his teachers did not understand. “A screw-up, in a small town” is how he later described himself. While the vocabulary of religious training permeates his work (sin, redemption, salvation, promised land), the experience of parochial school left its marks. “I hated school,” he recalled in 1978. “I had the big hate.” Freehold High wasn’t any better. Nearly 40 years after he graduated, he was given an award in absentia and sent along an acceptance speech: “My advice to teachers today is to keep your eyes on the ones who don’t fit in. Those are the ones that can think out of the box. You’ll never know where they’ll be going.”

Life wasn’t much better at home. While Adele was nurturing and loving, Douglas was angry and bitter. Father and son often clashed. “I remember when I was a kid,” Bruce recalls, “I always wondered what my old man was so mad about all the time.” Many a night Bruce stormed out of the house, only to find his father waiting in the kitchen on his return. Thinking of his father’s existence, Bruce said in 1981, “when I was real young I decided that if I was gonna have to live that way, I was gonna die.”

The guitar saved him. He first became enamored at age seven after seeing Elvis Presley on the
Ed Sullivan Show
, but his hands were too small to play. When he was 13 or 14 he tried again. He bought a guitar for 18 dollars, and he rarely set it down. “Everything from then on revolved around music. Everything,” he would recall. “I was someone who grew up in isolation, emotionally. That’s how I learned to play the guitar. I played for eight hours a day in my room.” Time and again “music saved me. From the beginning, my guitar was something I could go
to … Once I found the guitar,” he realized, “I had the key to the highway.”

But Springsteen’s embrace of rock ’n’ roll did nothing to ease tensions at home. Onstage, before introducing his cover of the Animals’ “It’s My Life,” he would tell a long story about screaming battles with his father, his mother trying to pull his father off him, his running once again out the door. “There were two things that were unpopular in my house,” he realized. “One was me, the other one was my guitar.” Bruce would eventually make peace with his father and appreciate the irony of Douglas attending his concerts where the decibels far exceeded anything ever heard at home.

All Bruce cared about was the music. It is all that has ever preoccupied him (other than, some might add, cars and girls). Being true to his art and his audience is a recurring theme through some 40 years of interviews. It accounts for the weeks spent in the studio, recording take after take, rewriting the lyrics, laying down tracks that would not be released because he thought they were not good enough. It accounts for his work as a bandleader, playing for decades with a group of friends—the E Street Band—and driving the unit until night after night it reached new heights. It accounts for live performances that stretch for three or more hours, never the same set twice, never routine but singular, never mechanical but creative. “The only thing that matters is your music,” says Springsteen.

The Arabesk Trilogy Omnibus by Jon Courtenay Grimwood
Vintage (Adrenaline Series Book 2) by Neal, Xavier
Stepbrother Protects (His Twisted Game Book Six) by Chloe Hawk
La madre by Máximo Gorki
Flight to the Lonesome Place by Alexander Key
Whisper's Edge by Luann McLane
On the Rocks by Erin Duffy
According to the Pattern by Hill, Grace Livingston
Lacuna: The Sands of Karathi by Adams, David
The Golden Flask by DeFelice, Jim
Our partner