Read Talking at the Woodpile Online 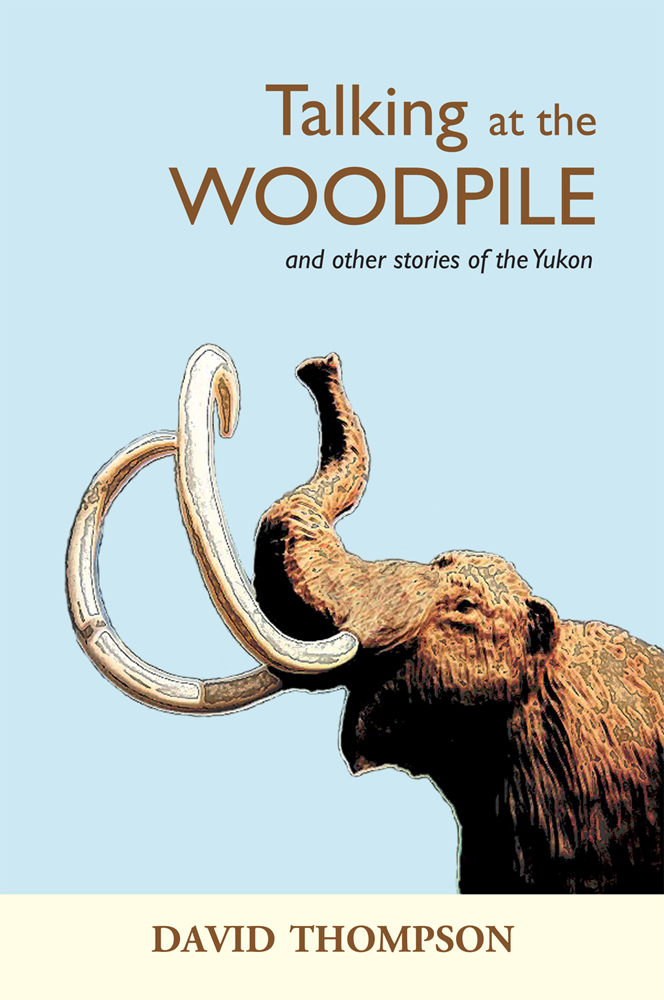 All rights reserved. No part of this publication may be reproduced, stored in a retrieval system or transmitted, in any form or by any means, without prior permission of the publisher or, in the case of photocopying or other reprographic copying, a licence from Access Copyright, the Canadian Copyright Licensing Agency,
www.accesscopyright.ca
, 1-800-893-5777,
[email protected]
.

Library and Archives Cataloguing in Publication

Talking at the woodpile / David Thompson.

For my wife, Wendy.

The Man Who Thought His Wife Was an Alien

Joseph Copper and the Small People

Rambling in the Rambler

In a cramped tunnel deep in permafrost on top of bedrockâfifty-nine claims above Discovery, where Adam's Creek meets Bonanza CreekâWilfred Durant worked late into a sub-zero Yukon night.

Candles in tarnished tin holders cast shadows of his toil as he stooped in the low headroom. His breath rose in wavering columns to blanket the ceiling in a field of white crystals. The tunnel was bridged with rough timbers oozing amber sap that stuck to Wilfred's clothing and tools. He preferred to cut the sap out of his hair rather than wash it out.

The barber will straighten it once I'm in town
, he thought.

Wilfred had an idea what the smell was. Parts of ancient horses, camels and a giant slothâall well known to placer minersâhad washed out in his sluice box over the years. He reached into his waistcoat pocket to take another look at the stained ivory carving he'd found a week ago. He planned to show it to Chief Daniel and the Han elders.

Wilfred shovelled tons of overburden and pay dirt into a wooden cart balanced on rickety lodgepole pine tracks that led to a vertical entrance. There the Arctic air dropped like an anvil onto his shoulders and back. He scooped the ore into beaten metal buckets and hand-cranked them forty feet to the valley floor above. His palms were sore from the manila ropes, and working back and forth from the relative warmth of the tunnel to the outside air inflamed his arthritis. He had just turned forty but at times felt ninety-five.

At two o'clock in the morning Wilfred put down his tools. He was played out; he could barely raise his arms. He trudged up the hill to the comfort of his cabin. The sparsely furnished single room was dim, since its rough log walls absorbed much of the oil lamp's light. A table and two chairs stood between two lumber-framed beds and the stove, and rough plank shelves supported cans of butter, sacks of dry goods and other groceries. Dog-eared magazines and newspapers lay stacked everywhere. A pastel doll-faced 1931 calendar girl invitingly held out a can of evaporated milk next to where Wilfred sat. He crossed off the days with a pencil hanging from a string he'd tied to a nail in the wall.

In the middle of the floor sat a galvanized washtub half full of silt-grey water. When Wilfred needed money, he thawed a bucket of frozen pay dirt and panned out the gold. Working by the light of the wood stove's open door, he would sort nuggets from the gravelâthe wheat from the chaff.

Wilfred cooked his meals to last a week and scooped them from a cast-iron Dutch oven. He washed down his pork and beans with the blackest of coffee, then he boiled dried fruit and topped it with crushed arrowroot cookies and milk. Life on the creek was hard, but Wilfred had come to work and work he did. Comfort would come later. After stoking the stove, he climbed into bed and fell asleep. His mother said that Wilfred slept the sleep of the just.

When he awoke, the sun blazed in a clear sky, and its reflection off the snow hurt his eyes. Exposed rock absorbed the heat, causing wisps of moisture to rise into the air. The only sound in the valley was the throaty crackle-croak of a raven calling its mates, and the distant soundâfive claims upâof an axe splitting firewood into kindling.

Leaning in the shelter of the doorway in his shirt sleeves, Wilfred soaked up the sunshine. He felt rested and relaxed after his breakfast. He'd used his last two eggs and the butt end of the back bacon, so he'd pencilled “3 doz eggs” and “4 lbs bacon” on the shopping list tacked next to the calendar. He lingered, reluctant to leave the light of day for the dark, damp tunnel. Finally he went in to finish dressing.

Walking stooped under the low roof and banging the scabs on his spineâlike buttons down his backâWilfred headed for the tunnel face. A large clump of gravel had sloughed off during the night, exposing a mound of hair.

“What the hell!” He stood up suddenly and banged his head on the ceiling. He barely felt the gravel and ice trickling down his back.

A few scrapes of his shovel, and a massive head started to emerge. Wilfred resisted the overwhelming primeval urge to flee. He stood his ground, reached out his trembling arm and ran his fingers through the long strands of hair until he touched the frozen, granite-like body beneath. It was truly dead. He withdrew his hand; it was wet and covered in hair that was difficult to remove.

His brow was dripping with sweat, and he felt giddy from the fright. He stood up straight, took a step back and relaxed his shoulders. He said quietly, “It's a mammoth, it's a damn mammoth.”

Gold could wait. A mammoth was much more interesting. Wilfred spent the day chipping around the carcass. In places the skin and flesh were missing and white bone shone through. The crushing permafrost had deformed the body grotesquely, but it was remarkably well preserved. Scattered throughout the thick coat were blades of grass, willow leaves and alpine flowers that still held their colour.

The animal was sitting up, suspended in the wall like a trophy. Wilfred could dig above and below the mammoth, which was resting on its knees with its trunk folded back along one side. He exposed the domed skull and the ends of the curved tusks. The eyes were sunken into black slits, and the mouth was slightly open to show a pale tongue clenched between gigantic molars. Every shovelful uncovered more. Even in death, the behemoth's might was impressive. Wilfred had never seen anything like it. Finally he had to stop; there wasn't enough food in his cabin to scrape together another meal, and he needed help.

It was twenty-five below when he walked to Dawson along Bonanza Creek Road. He pulled a sled piled with firewood and a tent, stove and sleeping bag, his survival gear in case things went awry. He stopped once to boil water from snow and eat bread that he thawed by dipping it in hot sugary tea. He completed the five-hour journey between the rising and the setting of the winter sun.

It took half the night to warm his cabin on Eighth Avenue with a blazing fire before he could turn in. In the morning his first order of business was to call on William Pringle, an old soldier and friend. They had been business partners from time to time, and Wilfred knew he could count on William's advice.

“
Mammuthus primigenius,
” William said after listening intently. “Wilf, my man, you've found an ancient elephant named after an old Russian word,
mammut
. More closely related to the Asian elephant than the African elephant. And a mature one, by the sound of it, maybe eleven feet tall at shoulder height and weighing sixteen thousand pounds. A rare find. This will be interesting. Could be ten thousand years old.”

It was a scramble to pick up supplies, check the mail, hire Windy Sale with his horse and sleigh and take care of other small business. They got out of town by noon the following day, with perishables tucked under buffalo robes to survive the cold. The steady pull of the sleigh and the rhythmic clop of horses' hooves had Wilfred nodding off. He slept until the sleigh came to a sliding stop in front of the cabin. Windy dumped off men and supplies, turned around, and with a “Goodbye!” he was down the road and out of sight.

The cabin was dark and frozen. It had retained none of the heat from a few days ago. Wilfred lit the lamps and built a blazing fire with precut wood. Wilfred always played this game when he went to town: he would stoke the wood stove and set the air vents just right, thinking he'd get back before the fire went out and the cabin froze. But he never made it. This time a jar of blueberry preserves had frozen and cracked, oozing a sticky puddle on the table.

Wilfred muttered, “That's my favourite jam. And my best tablecloth.”

William was barely able to contain his impatience. “I want to see this thing right away.”

They made their way down the trail to the ladder extending above the shaft, gripped its icy rails and climbed down. An eerie silence beckoned them as they hurried along the tunnel with William leading the way. He stopped dead when the lamplight picked up the head hanging out of the wall. He stumbled, caught his balance and gasped for breath. Nothing had prepared him for this.