Tamed by the Prince (Elven Lover) 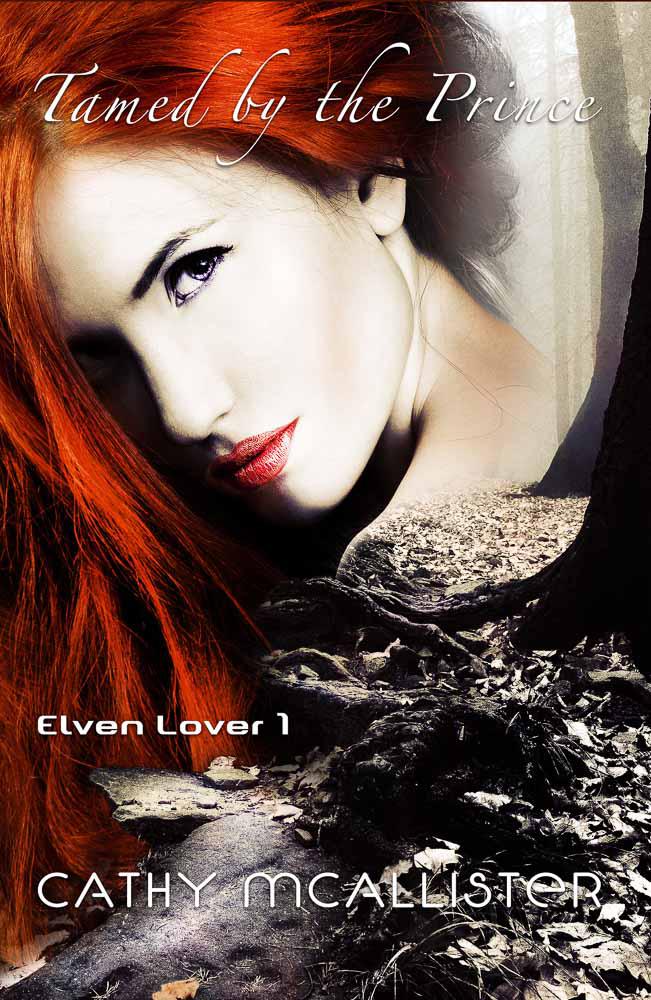 Tamed by the Prince

ALL RIGHTS RESERVED. The right of Cathy McAllister to be identified as author of this work has been asserted by her in accordance with section 77&78 of the Copyright, Designs and Patent Act 1988. All rights reserved. No part of this publication may be reproduced, stored in retrieval system, copied in any form or by any means, electronic, mechanical, photocopying, recording or otherwise transmitted without the written permission from the author. You must not circulate this book in any format. This book is licensed for your personal enjoyment only and may not be resold or given away to people. If you would like to share this book with another person, please purchase an additional copy for each recipient. For permission requests, write to the author at the following email-address:

All characters and actions in the following work are fictional. Any resemblance to either linving or deceased people is coincidantal.

S
ighing, Cherry folded
the last t-shirt and put it in the cupboard. Justin was extremely fussy about his things and she had already learnt, the hard way, what happened if she did not iron and fold his clothing perfectly. He was always quick-tempered and he made her life hell. But where else could she go? She had no one and at least Justin saw to it that she had a roof over her head and food in her mouth.

When Justin had picked her up off the streets she was just sixteen. She had run away from the orphanage and had more or less kept her head above water by stealing, always afraid of being caught and put back in the orphanage. Justin had given her everything she could have wished for, and more. She felt as if she had won the lottery, but it did not take long for disillusionment to set in.

Within very few months Justin showed his true self – a domineering, brutal man without scruples. Cherry tried to leave him but did not get far. Justin found her on the very same day and punished her so badly that it took her a long time to pluck up the courage to make a second attempt at leaving him. Not until a whole year later did she run away again, after weeks of planning. But that time, too, Justin managed to track her down and bring her back. He locked her away for a whole year and treated her brutally, so she lost all hope of escaping – forever! She had now learnt to behave in such a way as to get as little abuse from him as possible, and because of this her life had become bearable – to a certain extent – apart from the fact that she was not free. She never would be.  She was Justin’s property.

The door opened and Justin came into the room with a towel wrapped round his hips.

“Have you got the t-shirt ready? – The one with the panther on it?”

Cherry nodded and gave him the requested t-shirt.

He pulled the t-shirt over his head and looked at it critically. Paralysing fear began to spread through her immediately, until it felt as if it was choking her.

“What is wrong with you? What are you making that face for? Smile a bit! Do you want to scare off the guests tonight?”

“No. I’ve just got a bit of a headache,” she assured him hastily.

“Take a pill then. And make sure you dress nicely!”

“Yes, Justin,” she answered, kissing him on the cheek.

He patted her behind and pulled her to him. She had to stop herself stiffening up in his arms. She hated him being near her, but if she tried to avoid him she would have to suffer still more.

“I’ll sort you out good and proper when we come back,” he announced roughly, pinching her painfully on her backside. She had become so well trained that she stopped herself crying out in pain. She no longer even tensed up.

Cherry tried to stop herself trembling. She hated sleeping with him. As he kept on amusing himself with other women, he did not hassle her too often, but when he did, he bruised her horribly. She was glad when he let her go and she could disappear into the bathroom. There she sat on the toilet and let her tears flow. She had learnt to cry without any sound. After a few minutes she pulled the flush as if she had really been to the toilet and then undressed to shower. When she came out of the bathroom half an hour later she was showered, her hair was done and her make-up was applied. No one would believe that she had cried. This evening she put on a knee-length, tight-fitting skirt that showed off her well-formed behind, and a tight-fitting top.

She found Justin in the kitchen, on the phone to someone. He saw her and indicated that she should get into the car. She took her handbag and left the house. Sighing, she opened the passenger door of the yellow Ferrari and sat down on the leather seat. It seemed to take ages before the front door opened and Justin trudged out of the house, looking furious and slamming the door behind him. Fear filled Cherry’s belly and she wondered whether she would survive the night. If he was in such bad humour he would be all the more brutal if he had sex with her. Sometimes he strangled her until she was almost unconscious. Cherry hated that above all the other torture that he inflicted upon her. That was worse than being hit. When she could not breathe she was scared to death. What if he pressed too hard or for too long? Her life was hell, but she still did not want to die – and certainly not like that.

Justin tore the driver’s door open and threw himself into the driving seat. Without looking at her or saying a word he started up the engine and reversed at speed down the long driveway. At the end he turned the car hard and drove away with the tyres squealing.

It was packed when Merlon entered the club with his closest friend, Vigor. The music was loud, but not too loud to hold a conversation. They pushed their way through the crowd to the back of the room where there was a little more space. Merlon cursed himself for not going with his own wishes. He had really not wanted to go out tonight, but Vigor had persuaded him to.

“Not for long,” murmured Merlon and used his telepathic powers to clear a table near them. The three young men sitting there got up and freed the table without knowing what was happening to them.

Merlon and Vigor sat down and looked around. Vigor drummed on the table with his fingers. His eyes wandered around the room and rested on two young women standing in the corner looking across at them. He looked at them boldly from head to foot and the women whispered to one another. They giggled and looked at him flirtatiously.

“You can’t stop yourself, can you?” he murmured quietly.

“What else have we come here for? Tell me you wouldn’t like to take a shot. Both the little bunnies are pretty nice. I’d prefer the brunette. I like big breasts. – Oh, what the heck! You’re my friend. You can choose and I’ll take what’s left over. Aren’t I modest?”

Merlon looked at him, irritated.

“Neither of them are my type. Too tarty!” he decided. “You’re free to have them to yourself.”

“What? Every woman that spreads her legs on the first night is tarty. So what’s your problem? Do you prefer playing the gentleman for three months before being permitted to sink your cock into her pussy?”

“I’ve had enough of these one-night-stands,” declared Merlon decisively. “It makes me sick!”

“Don’t tell me you’re looking for the right woman?” asked Vigor in shock. “You’re taking the piss, aren’t you?”

“I wouldn’t necessarily say that I’m looking. I just don’t want to carry on jumping from one bed to another. It isn’t making me happy. It’s like microwaved food!”

Vigor made a derisive sound.

Merlon murmured quietly and turned away. It had definitely been a mistake to come here – especially with Vigor. They had already been out on the town together so often, picking up women. Elves had a large libido and women of their kind were not so easy to get into bed, which was why they had made the human world into their hunting ground. Up to now that had been fine, but recently Merlon had felt more and more that it was no longer enough for him to have sex with just any woman. He wanted more. He was ready for a bride and he would certainly not find one here. He should look for a suitable mate in his kingdom of Amarantus instead of squandering his time here in this club.

His eyes suddenly fell upon a red mane behind the bar. The woman was standing with her back to him, but the sight of her hair alone made him freeze in his chair. His pulse began to race.

‘
Turn round!’
he commanded telepathically.

He held his breath in anticipation, and as she slowly turned round he thought his heart had stopped beating. She was the most enchanting creature that he had ever laid his eyes on.

“Put her right out of your mind!” said Vigor quietly, having followed his gaze. “She’s with the owner. A dodgy bloke. You don’t want to mess around with him.”

Merlon gritted his teeth. She was his! He could feel it. She was the woman who would sit at his side when he succeeded his father on the throne. She should be the mother of his children. He wanted to wake up next to her every morning.

“Did you not hear me?
She is taken
! Which part of that have you not understood?”

“I’ll find a solution to the problem! She belongs with me. I know it!” answered Merlon stubbornly.

Vigor rolled his eyes and groaned.

“She is a
human
! And she is
taken
! I understand that you’re looking for something lasting but she is not for you. Let’s go, and tomorrow we’ll start looking for a nice elf girl for you. How does that sound?”

“And I’m saying that you’re not listening properly!
She belongs with me
! Which part of that have
you
not understood?”

“OK. I’m sure your father will be delighted. I’ve tried to prevent you from doing something stupid, but hey! I’m not your
wet nurse
!”

“So I’m off now, to have some fun. See you later!” said Vigor, getting up.

Merlon grimaced as he watched the way his friend latched onto the two young women. The way they were flirting made him want to vomit. He could not believe that he had ever joined in with such things. But he had. He could not begin to count the number of women he had taken to his bed in this crass way. He made himself sick. This was an end to that now – especially as he had finally met his mate.