Read Tamed by You Online 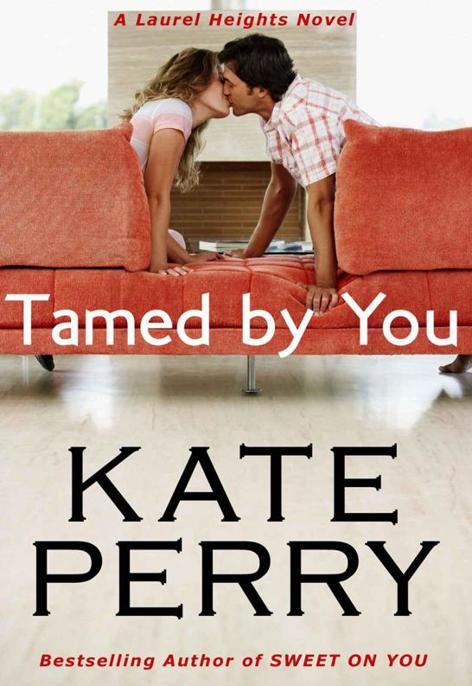 "Can't wait for the next in this series...simply great reading. Another winner by this amazing author."
–Romance Reviews Magazine

"A winning and entertaining combination of humor and pathos."
–Booklist

My Magic Man, for not just putting up with me writing this book during our honeymoon but encouraging me to do it. Thank you for your pep talks, baby. Also, thank you for the ever-ready offers to help with "research."

"The way you set this up is brilliant, Valentine." Jon's fingers danced over the keyboard, his focus intent on the code scrolling across the laptop screen. "When are you going to decide to stop playing around with people's love lives and embrace your true calling as a software engineer?"

"I'll never go to the dark side." Smiling, Valentine settled on her living room floor next to him, adjusting the cushion under her. "Besides, I wasn't fated to be an engineer."

Because he wanted her.

She wrinkled her nose and folded her legs. She'd met him last year, when she first moved to San Francisco. They'd gone out three times before they'd both had epiphanies: She’d realized Jon wasn't for her, and Jon had realized he was in love with her. Or so he thought.

They all thought that. Every guy she went out with "fell in love" with her after the first date.

It sounded so conceited, even in her own mind, but in reality it was just annoying. It wasn't as if she was some vixen, or beautiful, or even that interesting. She was plain Valentine Jones, matchmaker, with straight red hair and freckles on her cheeks. If she had boobs, she'd understand why they acted the way they did, but she was lacking there, too.

They didn't even know her. How could they, after so few dates? They just saw her as a blank canvas to pin their hopes and dreams on. They never noticed something was missing.

She did. Love and relationships were her business, after all. Even if she sucked at it.

Sighing, she returned her attention to her app. "So you think everything looks good? The database will hold up to a lot of traffic?"

"For sure." Nodding, he closed the laptop and handed it to her.

She reached to take it, only he didn't let go, using it to pull her closer.

Fortunately, right then her phone rang. She let go of the laptop, ignoring Jon's grunt as it dropped on his knee, and picked up her phone. She breathed in relief when she saw Isabella's face on the screen. She held up her phone. "It's my sister. I need to take it."

He squinted at the phone. "I knew you were twins, but you two look exactly alike."

They didn't—at all
. They were mirror images of each other. Where Valentine had a constellation of freckles on the left side of her face, Isabella had the same on the right. They had dimples on opposite cheeks, and birthmarks on opposite hips.
That didn't even get into the differences in their personalities.

But she wasn't going to argue. She simply turned away from Jon and
answered the phone. "
Isabella, I think I finally finished the matchmaking app. We've been testing
the
back end and it seems to be in order
.
"

She should have known that'd be the thing her sister picked up on. "My friend Jon is helping."

"Isabella," she admonished, turning her head so Jon wouldn't see her flush.

"Oh. He's part of your harem. I'm amazed at how you manage to turn them into devoted slaves. It's impressive, actually. But I didn't call to talk about all your beck-and-call men.
Mom's on her way to see you
.
"

Valentine slid off her cushion.
"
What?
"

"Mom. Is. Coming. To. See. You."
Isabella
said succinctly.

"Are you okay?" Jon asked, reaching out to steady her.

She waved him off.
"Why is Mom flying up here?"
she asked her sister.

The cup of coffee she'd had earlier roiled in her stomach, bitter, like an acidic lake. She thought of the number of matches she'd made since she'd moved to
Laurel Heights
, and the lake tried to flood up her throat. "Did you say something to her?"

"Of course not. You know me better than that. I'm on your side."

She was
—they
'd
always been
each other's defender
. Considering how complicated everything was, it was amazing they didn't resent each other.

"You better pull it together," Isabella warned. "It sounded like she was staying for a couple days."

Valentine groaned. "How much time do I have to steel myself?"

"She's on the morning flight. She arrives at ten."

"That was fifteen minutes ago, Isabella!" She jumped to her feet. "Why didn't you call sooner? Like last
week?
"

"I didn't know until this morning. She called me from the airport
, and
you're a
grump
in the morning. I was giving you time to wake up.
Valentine, she's been a little edgy lately. Try to go easy on her, okay?
"

"What does that mean?" She frowned. "And I'm always easy on her."

"And I'm Mother Teresa."
There was a youthful shriek through the line. "I've got to go. The kids are trying to kill each other.
I'll call you later.
"

What did that mean? Valentine stared at the phone, perplexed. But then
she
noticed
the time and realized her mother
would
be on her doorstep at any moment.

She turned to Jon. She pictured the commotion it'd cause if her mother found him in her living room, and the panic mounted. "You need to go. Right now."

He stood up too slowly for her peace of mind. "What's going on?"

"Nothing, if you get out of here before my mom arrives." She grabbed his arm with one hand and his jacket with the other. She dragged him to her door, gave him the jacket, and kissed his cheek. "I really appreciate your technical expertise, Jon."

"Trust me, if you knew my mother, you'd thank me." She pushed him out the door and locked it.

She looked down at her clothes, yelped, and ran for her bedroom. Venus Jones did
not
approve of yoga pants and a tank top.
Sloppy
, she'd say, her nose twitching as if she smelled something putrid. As matchmakers, they had
to project the image of competent businesswomen
to instill trust in their clients.

S
ince Valentine was being ambushed, she'd
need
armor. S
he
rummaged through
her small, crammed closet. The decision was easy: nylons, slip, camisole, suit. She hurried to get ready, applying just enough makeup to
pass muster
and twisting her hair into a sedate bun.

She looked in the mirror. She
appeared
competent and accomplished, like someone you'd trust the fate of your love life to.

Sighing, she crammed
her feet into
a pair of matching pumps, grab
bed
her purse, and ran out the door.

Fortunately, she had a very short commute. Walking out the door, she went downstairs and let herself into her office. She
made a face as she stepped
inside,
pretending to be blinded by the glare of the gilded furniture and mirrored surfaces.

Not her idea, by the way. It was "corporate branding." At least that was what she called it. Really it
'd been
her grandmother's aesthetic, and what Grandma
had wanted
still went
, even though she'd passed away over a year ago
.

In fact, her mom had taken to overly enforcing all of Grandma's rules since her death. They all missed Aphrodite Simmons, but Venus especially missed her mother and this was a way to keep her close. Which was why Valentine let her mom get away with the harassment, even though it drove her crazy. Of course, she'd also moved four hundred miles away to San Francisco.

Valentine ha
d
just
turned on the neon
Matchmaker
sign in the window and
settled onto a stiff chair when the bell
signaled that
someone had entered. She looked up
, ready to
preten
d to be
surprised by her mo
ther
's appearance.

But then she
saw
her mom, and she didn't have to pretend to be surprised at all. Venus Jones looked nothing like her normally meticulous self. Her dress was wrinkled, hanging on her loosely like she'd lost a bunch of weight. Her sweater was buttoned incorrectly, and her hair was flat on one side, as though she'd slept on it. Her mascara smeared under her eyes so it looked like she had dark circles.

Valentine squinted. Actually, maybe her mother did have dark circles. She gaped, alarmed. "Mom? Were you in an accident?"

"Really, Valentine, don't be silly."
Venus set her bag down by the entrance
and looked around
.
A strange expression crossed her face, making her look like a lost girl, which was so contrary to her normal
I'm in charge of the world
attitude. Then she straightened her spine.
"I know Isabella called to tell you I was on my way
, so you don't have to play clueless.
"

Yes, but her sister hadn't told her what a state their mom would be in. She
got up to hug her mom
, gently because Venus looked like she'd break with too much pressure
. Her mother smelled like roses, like she always had. The scent of love, Venus had told them a long time ago
, and it reassured Valentine a little
.

W
h
en they separated, Valentine surreptitiously sniffed her
own
suit. She smelled like mothballs.
"Sit down, Mom. Do you want some hot chocolate or something?"

"No, thank you."
Her mom looked around the room
as she perched primly on a seat
. "This is nice,
sweetheart
. Your grandmother would
have
approve
d
."

Her mother's voice hitched, like she was about to burst into tears, and it freaked Valentine out. Venus Jones never cried—not even at her mother's funeral. "What's going on, Mom? Did something happen? Is Dad okay?"

"Your father is fine." Venus clenched her hands in her lap, knuckles white. "Everything is fine."