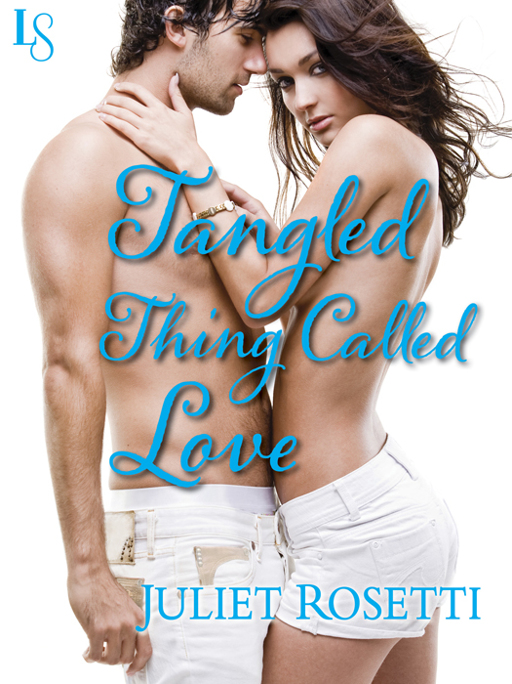 Tangled Thing Called Love
is a work of fiction. Names, places, and incidents either are products of the author’s imagination or are used fictitiously.

LOVESWEPT is a registered trademark and the LOVESWEPT colophon is a trademark of Random House LLC.

Excerpt from
Crazy for You

Beauty is only skin deep,
But ugly goes clean to the bone.

Fawn Fanchon was seventeen years old when she walked into a swamp and disappeared from the face of the earth.

She had wide-set hazel eyes, glossy dark hair, and a heart-shaped face. She was five feet five, a slender, long-legged girl who managed to pull off chic even in Goodwill jeans and dollar-store jewelry.

She disappeared the evening she was crowned
Miss Quail Hollow
. Her fellow contestants, mostly the tall, athletic blondes Wisconsin grows like sunflowers, included a cheerleading captain, a homecoming queen, and a state tennis champion. They were girls whose mothers bought their daughters pageant gowns from Neiman Marcus, whose fathers were small-business owners and insurance agents, whose families sat down to the dinner table every night for well-balanced meals and discussions of world events.

Fawn’s mother had died three years earlier from a ruptured appendix, her father drove a forklift at a birdseed plant, and her family, who depended on food stamps, often had suppers of microwave popcorn, eaten in front of the television at ten thirty at night.

All the other girls wore bikinis for the swimsuit competition, but Fawn wore a one-piece bathing suit she’d borrowed from an aunt, managing during her brief spin down the runway to look classy while making the bikini-clad girls seem slightly trashy.

For her talent number, she belted out “Summertime” in a surprisingly powerful alto. Nobody had realized Fawn could sing. The Girls from Good Homes had barely registered that Fawn was in the competition. Yet when the preliminary scores were posted the day before the finals, there was Fawn Fanchon’s name, leading all the rest.

That’s when the knives came out.

That’s when the Neiman Marcus girls grasped that a dark horse was streaking up on the outside rail. That’s when the red food coloring was splattered across Fawn’s gown at the
oops-it’s-that-time-of-the-month
spot; that’s when the cayenne pepper was sprinkled into her blusher to burn her cheeks; that’s when
Bet the judges liked your BJs!!
was scrawled across her locker in turquoise nail polish.

The evening gown competition was held on the last night of the pageant. Fawn wore a pink beaded dress she’d sewn on her mother’s old sewing machine, dangly earrings she’d made from a crafts store kit, and high-heeled silver sandals bought at a rummage sale.

If you freeze the videos taken at the moment Fawn is announced as the winner, you can catch the naked hostility on the other girls’ faces before they paste on their
If it couldn’t be me, I’m glad it’s her
masks. If looks were lasers, Fawn would have burst into flames.

Delirious, disbelieving, laughing and crying at the same time—one of those girls who looks beautiful even while weeping—Fawn Fanchon was crowned Miss Quail Hollow on a high school stage that smelled like moldy curtains, handed a Kiwanis Club scholarship check that would pay for her first semester at college, and applauded by an audience weary of cheerleaders and homecoming queens.

Fawn stayed behind afterward for photos, interviews with local reporters, and instructions on her new duties. Then, like a deflating Disney balloon, the magic slowly seeped out of the auditorium. The
Miss Quail Hollow Pageant
banner fluttered to the floor, the runway was dismantled, the lights winked out one by one.

Fawn walked out of the school and headed toward the parking lot. She was alone. Her dad, who’d promised to be there for the finals, had forgotten about the pageant and was sitting in a bar. She tossed her bouquet onto the bench seat of her truck, a Chevy pickup whose front bumper was held on with baling wire. She was still wearing her evening gown, sash, and tiara as she got in, started the engine, and rolled out of the parking lot.

Her truck was found two days later at the end of a dead-end road in a nearby swamp. Prints from Fawn’s high heels were gouged into a muddy path leading down to a fast-moving creek. Her shoes were found on the banks of the stream, her bouquet in a patch of weeds. The creek was dredged, the swamp was searched, a nationwide Amber Alert was
issued. But no trace of Fawn, either alive or dead, was ever found.

Her disappearance would remain a mystery for thirteen years.

The suitcase was cheap, like everything else Mazie owned, and had a wonky wheel that snagged on every speck of grit in the road. She had to yank it along like a balky pet while clutching a bulging tote bag, a sack of dog food, and a small gray dog who couldn’t walk because the broiling asphalt was too hot for his paws.

Mazie felt close to broiling herself. When she’d started out in the chill of the morning, she’d been wearing a T-shirt, hoodie, and jeans. But by three o’clock on a June afternoon, with the temperature blazing into the nineties, her hoodie was knotted around her waist, her T-shirt was sweat-stuck to her body, and her jeans felt like molten asbestos. Having a long-haired dog clamped against her chest wasn’t making things any cooler.

She desperately needed a drink, but that would have meant unslinging her tote bag and rummaging around for her water bottle. Way too much trouble. Besides, there—visible now around a bend in the lane—was the house, a sight that quickened her heart and gave her aching legs a last surge of energy.

Maguire
, read the name on the rural mailbox.

Four years had passed since Mazie Maguire had set eyes on this place, and she was relieved to see that nothing had changed. The farmhouse was a rambling, two-story white frame building with dark green shutters and a wraparound front porch, set on a knoll beneath towering, century-old maple trees. Just beyond were the barns and sheds, the creaking old windmill, and the apple orchard. Mazie drank in every inch of the scene, and tears would have sprung to her eyes if the heat hadn’t dried up her tear ducts hours ago.

Home. Where, when you had to go, they had to take you in.

The door of the house opened and a woman hurried out onto the porch, wiping her hands on a dish towel. “Mazie! We expected you hours ago.”

“Why didn’t you call?” Gran asked. “I would have picked you up.”

“I did call. I kept getting a busy signal. So I bummed a ride with Elmer Guthrie.”
The elderly man, who lived on the next farm over from the Maguires, had dropped Mazie at the end of the mile-long driveway and she’d trudged from there.

“Must have been those darn kids again, leaving the receiver off the hook.” Gran smiled as Mazie’s dog stretched up to lick her face. She scratched under its chin. “Who’s this, then?”

“Well, aren’t you a handsome little fellow,” Gran cooed. “Or do I mean girl?”

Muffin looked like a furry gray jelly bean with eyes. He was a shih tzu, with the breed’s chubby cheeks, black button eyes, tiny nose, and all-over air of cuteness, a breed whose main defensive mechanism lay in its ability to get humans to go
awww
and take them home for a lifetime of pampering. But in Muffin’s case, the teddy bear cuddliness disguised a wolverine disposition. Spotting a cat crossing the yard, Muffin went rigid and alert, his fur bristling, a large growl issuing from his small chest. He struggled to break free to get at the cat.

“Don’t even think about it,” Mazie scolded, tightening her grip on him.

Gran held the door while Mazie dragged her things into the house, sighing in relief as the cool inside air slid over her overheated skin. Like her granddaughter, Katie Maguire was small-boned and slim. She’d turned eighty-five this year, although she had the energy of a woman half her age. She wore her silvery white hair in a short, flattering style, her skin was tanned and speckled with liver spots, and she would sooner have gone without her clothes than without her lipstick. She was wearing lavender capris, a lilac floral blouse, and the same oval-shaped eyeglasses she’d worn as long as Mazie could remember.

Mazie set down Muffin, who darted about exploring his new surroundings, tail wagging excitedly. “Where
is
everyone?”

“Emily had to leave for the hospital a day early. Scully’s with her, and the twins—oh, Lord knows what they’re up to. Let’s get you settled into your room.”

Mazie wrestled her suitcase up the stairs and automatically turned in to the first room on the left, the room where she’d spent the first eighteen years of her life. Fortunately, during Mazie’s Goth phase at age fifteen, her mother hadn’t allowed her to paint her bedroom walls black. Now, returning as an adult, she appreciated what a lovely,
restful room it was. The walls were pale cream, with a stain on the ceiling that resembled a map of Greenland. The bed was a double with a curlicued brass headboard and a blue and white quilted coverlet. White net curtains hung on the windows, a blue hand-hooked rug rested on the wooden floorboards, and a honey pine dresser with a vanity mirror stood against a wall. She loved this room. She bent to sniff the pink peonies in a pitcher on the nightstand—Gran’s way of welcoming her home—and nearly snorked a tiny ant up her nose.

“You get all cleaned up now,” Gran said. “Bathroom’s open. When you come down I’ll have a root beer float waiting and you can catch me up on all your news.”

Leaving the unpacking for later, Mazie grabbed a change of underwear, shorts, and a sleeveless blouse out of her suitcase. The bathroom was just across the hall, big and old-fashioned, like the rest of the house. Nothing much had changed here, either. Same rose printed wallpaper, same claw-footed enamel tub, same temperamental toilet, same permeating smell of Palmolive hand soap. And still no lock on the door. The lock had come off several years ago after one of the twins’ stunts that involved Styrofoam peanuts, a water polo net, and a bathtub drain plugged up to create a swimming pool.

Catching a glimpse of herself in the mirror above the sink, Mazie winced. Her eyes were vividly blue against her flushed face, her brown hair stuck to her scalp in sweaty clumps, her nose was sunburned, and ten kajillion new freckles had popped out during the long walk this afternoon. You’d think that by the time a person reached the age of thirty, she would have stopped freckling.

Rescuing Liberty: Perseverance Book 1 by Amanda Washington
Beloved Beast by Cathy McAllister
Conservation of Shadows by Yoon Ha Lee
Beach Plum Island by Holly Robinson
Paths of Glory by Humphrey Cobb
15 Paranormal Romance Collection Boxset- Billionaire Bad Boy by Dark Mocco
Discovery (Hybrid Book 1) by Emma Jaye
The Demon in Me by Michelle Rowen
The Secret of the Ancient Alchemist by Yasmin Esack
I Am the Only Running Footman by Martha Grimes
Our partner