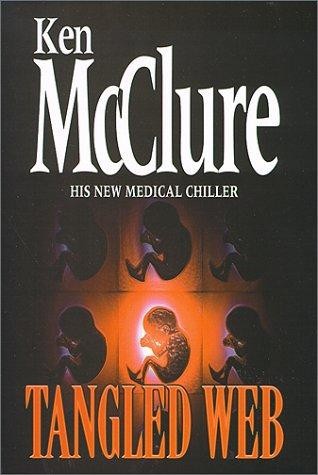 Another fast-paced and devastatingly plausible medical thriller from Ken McClure The quiet life of the Welsh village of Felinbach is shattered when the baby of a local couple is stolen from her cot. No one can think of any reason for the crime as the couple are not wealthy and the baby is badly deformed having been born without legs. The police, in the absence of any other suspect or motive, suspect the Palmers and their suspicious are confirmed when the body of a baby is discovered buried in their garden. Local GP Tom Gordon cannot believe the Palmers had anything to do with the murder. But it is not until Tom is co-opted to investigate the theft of the body of a cot-death baby from a nearby general hospital, that he begins to see a sinister connection between the hospital and the IVF clinic where the Palmers had been treated.

Medical thriller from England about the scary things that can happen when you send in the clones.The Palmers, John and Lucy, a loving couple, have come home from the fertility clinic with little Anne-Marie. She was born legless. No matter, they tell each other, she belongs to them, and they adore her. But when the child's savaged body is discovered buried in their garden, John immediately confesses to murder, becoming at once an object of scorn, a pariah in the small Welsh village of his birth. Only his stalwart family doctor, Tom Gordon, rallies round. Convinced of John's innocence, Tom is prepared to risk his reputation, his career, even his very life to prove it. But why, if John is innocent, has he confessed? For the noblest of reasons, Tom explains. In his first grief-stricken moments--not thinking clearly--John decided that Lucy, having found the child's deformity too much to bear, must have killed little Anne-Marie. Thus, his confession was meant to shift blame from the woman he loved to himself. Since the police have made it clear, however, that they consider the case solved, the presumed guilty party is jailed, and Tom turns sleuth. He soon discovers that strange things are going on in Caernarfon General's fertility clinic: it seems that human cloning has been dabbled in by staffers cavalier indeed about ethical behavior. And then suddenly another infant girl is in the headlines. Little Megan Griffiths is dead, and no one can find her corpse. Obviously Anne-Marie and Megan are connected somehow, argues Tom. Needless to say, he's right. Needless to say, rural Felinbach hates him for as a result. Needless to say, he cracks his case, wins his girl, and earns the heartfelt gratitude of John and Lucy.Plodding plotting, pedestrian prose: veteran British thriller writer McClure debuts inauspiciously here. -- *Copyright © 2000 Kirkus Associates, LP. All rights reserved.*

Ken McClure is an award-winning research scientist with the Medical Research Council of Great Britain. His medical thrillers have been translated into twenty-one languages and all are international bestsellers. He lives and works in Edinburgh. Author Residence Edinburgh

O what a tangled web we weave when first we practise to deceive.

Other Titles by Ken McClure

John Palmer came into the room and placed another log on the fire. He made sure it was stable before turning round and looking at his wife, Lucy, who sat with their baby daughter on her knee.

‘You know, Lucy this is how I always hoped it would be,’ he said, ‘You and me and our baby in our own home.’

‘You’re just a big softy when it comes right down to it,’ smiled Lucy. ‘But it’s not going to be easy, you know.’

John knelt down beside them and brought his forefinger gently down the baby’s cheek. ‘She’s our daughter,’ he said. ‘That’s all that really matters. We’ll cope with the problems as they come along.’

John tickled the baby’s tummy and she responded with a gurgle. ‘See,’ he said. ‘She knows it too.’

‘You smell of sawdust,’ said Lucy.

‘I’ve been cutting logs, I’m entitled to smell of sawdust,’ said John with a grin.

‘I didn’t say it was unpleasant,’ countered Lucy. ‘It’s quite macho really in a lumberjack sort of a way. Is it still snowing outside?’

‘A little, but this’ll be the last snow of the winter, I’m sure,’ replied John. He moved over to the window, leaning both hands on the sill to look out at the garden.

‘The weather forecast said it was going to get warmer towards the end of the week,’ said Lucy.

‘If it’s going to thaw then maybe I should build Anne-Marie a snowman today,’ said John thoughtfully.

‘No matter. We can take her out into the garden and show it to her – make sure she appreciates the finer points of her father’s artistic talents.’ John turned round, his face filled with growing enthusiasm for the idea. ‘Tell you what, you have a hunt for clothes for the snowman and I’ll get started. Play your cards right and you can have the honour of naming him. Come on, let’s get cracking!’

‘Oh, all right,’ agreed Lucy, knowing that any argument would be pointless once John got a bee in his bonnet. ‘I’ll put Anne-Marie down for her sleep and then have a hunt through the wardrobes, see what I can come up with.’

‘One thing at a time,’ protested Lucy.

‘First, your daughter is going down for a nice nap.’ Lucy cradled Anne-Marie in her arms and stood up. ‘So don’t make too much of a racket.’

‘Maybe I should build it in the front garden instead,’ said John, hesitating at the door.

‘I’ll expect you outside in ten minutes if not before.’

‘You took your time,’ said John but not unkindly when Lucy finally reappeared a good half-hour later, carrying a laundry basket full of bits and pieces. ‘I’ve practically finished. What kept you?’

‘It’s amazing what you find when you start emptying out the wardrobes,’ said Lucy. ‘I came across things I hadn’t seen for years - stuff I’d completely forgotten about This is the blue dress I wore to your sister’s wedding, remember? Here are the beach sandals I bought in Greece, and that top I spilled spaghetti down - I’ve never been able to get the marks out. I found lots of things, including some of yours. I’ll show you later.’

‘Well, look, I’m just about finished here. You can dress him and put the final touches to his face, if you like.’

‘Thank you - I shall enjoy that,’ said Lucy, tongue in cheek. ‘It does need a more artistic hand …’ She inserted the button eyes and carrot nose and stuck a little piece of red material below them as a mouth. She adjusted it into a crescent shape. ‘Let’s give him a nice big smile,’ she said.

Lucy stood back to admire her handiwork and John put his arm around her shoulders. He said, ‘This is fun. It’s like being a kid all over again. I can’t wait to go to the zoo and have picnics at the beach. I’ll build her a little house in the garden too and she can keep her dolls in it. Maybe we can get a dog when she’s a bit older.’

Lucy smiled but her eyes held a hint of sadness. She tilted her head so that her cheek touched John’s hand on her shoulder. After a few moment, she said, ‘I’ve just remembered, I’ve got a red scarf somewhere - hall cupboard I think, I’ll get it.’

‘That would be perfect,’ agreed John.

Lucy went into the house and returned a few moments later with a scarlet woollen scarf. She wrapped it round the snowman’s neck then she and John stepped back again to look at the rotund white figure standing proudly in their front garden. ‘Handsome devil, isn’t he?’

‘What have you decided to call him?’ asked John.

‘Perfect!’ agreed John, appreciating the definite resemblance to the pompous
Dad’s Army
TV character. ‘Captain Mainwaring it is then. Is it too soon to wake Anne-Marie?’

They came inside and had tea and biscuits in the kitchen, warming their hands by the wood-burning stove and creating small puddles around their boots from melting snow.

‘Saturday night - let me think. There’s a Ruth Rendell thing on at eight if I remember right, but that’s going to be a bit too early for me I’m afraid, I’ve still got some marking to do. I’ve skived off long enough making Captain Mainwaring.’

‘Well, all of Class 3c’s thoughts on the biological basis of life. In terms of intellectual ability, I think Captain Mainwaring might make the middle of that lot if he put his mind to it.’

‘Maybe not,’ agreed John with a smile, ‘But they can be exasperating. Let’s wake the baby and introduce her to the Captain.’

‘All right,’ agreed Lucy. ‘But I’ll have to wrap her up warmly. We don’t want her catching cold.’ She left the room and John washed out the mugs they’d been using.

Suddenly a scream tore through the air making him drop the second one in the sink. It broke into three pieces. His blood ran cold as he ran through the house to Anne-Marie’s room where he found Lucy staring at an open window. The Disney pattern curtains were billowing gently in the icy breeze.

‘But how?’ protested John. ‘Where? How could she?’

‘Oh my God.’ John looked disbelievingly at the empty cot with its covers thrown back and its sidebars dropped. Coming quickly to his senses, he ran round to the back of the house to look for footprints in the snow, but his heart fell as he discovered he couldn’t make anything out: he had trampled down most of the area when he’d been out there earlier chopping logs. There was no trail to follow.

‘The police,’ he exclaimed. ‘We must get the police!’

The Way They Were by Mary Campisi
The Ultimatum: A Jeremy Fisk Novel by Dick Wolf
Devil May Care (A Jonathan Harker Mystery) by Evans, Tony
Left to Tell: Discovering God Amidst the Rwandan Holocaust by Immaculee Ilibagiza
Fixing Delilah by Sarah Ockler
Don't Put Me In, Coach by Mark Titus
History of the Jews by Paul Johnson
Daisy Buchanan's Daughter Book 2: Carole Lombard's Plane by Carson, Tom
The Vanishings by Jerry B. Jenkins, Tim LaHaye
Public Anatomy by Pearson A. Scott
Our partner