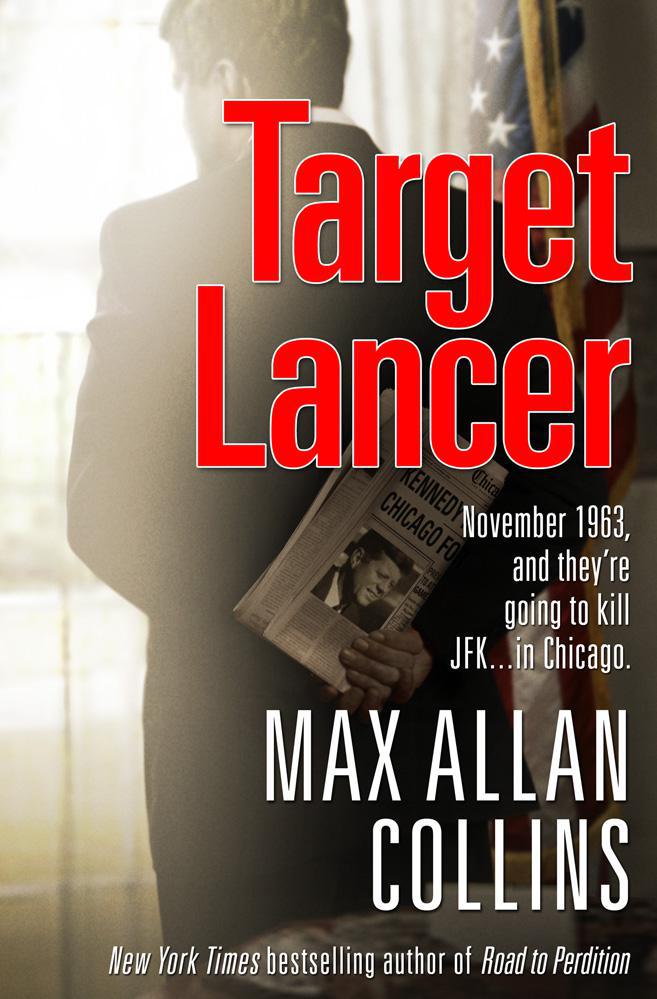 I Owe Them One

You never know what’s hit you. A gunshot is the perfect way.

Do you remember where you were when President Kennedy was killed? Even if you weren’t alive at the time, you surely know that a sniper in a high window was waiting for JFK to ride by on that infamous day in November.

The city’s oldest, most famous strip joint was just a storefront with
606 CLUB
emblazoned in neon over its lighted-up canopied walkway. Another, smaller
606
neon sign crooked its summoning finger into the street, while windows promised delight by way of posters of Lili St. Cyr, Ann Corio, and Tempest Storm, none of whom was appearing right now.

The 606 opened in 1932, back when strippers were called burlesque queens, and it hadn’t changed much in all that time. Sure, the walls got washed on occasion, the floors swept, the dishes scrubbed; but otherwise it remained a cozy, smoky, naughty retreat for businessmen, college boys, and in particular conventioneers.

The latter were the lifeblood of the joint, as the 606 was mere blocks from some of Chicago’s best-known, most commodious hotels. On the other hand, South Wabash was old Capone turf, not far from the site of Johnny Torrio’s Four Deuces, and within spitting distance of Skid Row.

This made the 606 just the kind of joint, in just the type of dicey neighborhood, where an out-of-town businessman carrying a fat wad of cash might think taking a bodyguard along wasn’t such a bad idea.

I couldn’t remember when I’d last done a bodyguard job. I was too old, too rich, and too famous for such piddling work. Well, maybe I wasn’t
that
old—let’s call it my well-preserved fifties—and “rich” might be overstating it, though ironically any fame of mine had rubbed off from such front-page clients as Mayor Anton Cermak, Huey Long, and Amelia Earhart.

None of whom, come to think of it, had benefitted particularly from my bodyguard services.

But I was on the spot, because this client was an old friend who had done some flack jobs for me when he worked for a local agency before moving to Milwaukee, where he had built a small PR empire out of several big beer accounts.

As for me—Nathan Heller—I was president and founder of the A-1 Detective Agency, which took up much of the seventh floor of the fabled Monadnock Building.
My
small empire included fourteen local agents (that’s what we were calling operatives these days) and branch offices in LA and Manhattan.

We’d met for beer at the Berghoff on West Adams, in the venerable German restaurant’s bar. It was the kind of place where cigar smoke trumped cigarette, the long narrow space sporting a polished wooden counter extending the entire length of the east wall, bowing out at the north end. This was a male preserve, literally so—like Spanky and Alfalfa’s clubhouse, no girls were allowed, other than the two female minstrels that were part of an ancient hand-carved clock behind the bar, amid old-world murals.

Mid–Friday afternoon, the bar busy but not crazy, we managed to negotiate a quiet corner toward the end of the counter. We had the Berghoff’s own Dortmunder-style beer, from one of its twelve taps—no other options, except for the private-stock single-barrel Kentucky bourbon on the back shelf.

Beer would do fine.

Tom was easily ten years my junior, a Korean War veteran who had once been an athlete and still had the broad-shouldered six-foot frame to prove it. He wore a breezy-looking plaid jacket with a blue vest, blue-striped shirt, and blue tie. In case you’re wondering, I was in a dark-blue Botany 500 suit with a blue patterned tie. Tom was hatless, but I wore a narrow-brimmed shag-finish felt hat. From Dobbs.

“Everybody in the Berghoff bar is a stand-up guy,” I reminded him. There were no stools at the counter, just a brass rail for resting one foot at time.

Tom grinned and chuckled, which was more than my remark deserved. He was the upbeat type, perfect for the puffery racket, boyish with that blond crew cut, those sky-blue eyes, pug nose, and dimpled jaw. He might have been Kirk Douglas’s kid brother.

“I just mean,” he said, putting something serious into his tone, “I know you’re a busy guy, an important guy. Hell, they call you the ‘Private Eye to the Stars.’”

That was a
Life
magazine spread, and not a very big one.

“Only when I’m working out of the Hollywood office,” I said, and sipped the cold beer. It had a nice bite to it. You had to hand it to the Germans. They could make war, and they could make beer.

He leaned in and smiled the PR-guy smile. “Is it true they based James Bond on you?”

“It’s gospel. Ian Fleming has to send me a nickel for every book he sells.”

This he laughed at much too hard.

“Is it your wife?” I asked, on the outskirts of irritation. Half my agents worked domestic.

“Nothing to do with Jean. It’s probably … nothing at all.”

Now I was approaching the city limits. “Tom, we’re not standing in the dark drinking beer in the middle of the afternoon because we’re alcoholics. At least I’m not. You didn’t want to meet at my office. Why?”

My bluntness made him wince. “Well, I didn’t want to make this … official. I wanted it more social. More like a favor. Although I’ll pay you! I don’t expect you to listen to my stupid situation for free.”

Not his wife. Business, then.

“I’ll listen for free,” I said, and had another sip of the nicely sharp brew. “But when you did PR work for me, I paid for it. If I have to step up to the plate for you,
you’ll
pay for it. Fair enough?”

“Perfectly fair.” He glanced around.

No one was close by, and there were enough other mid-afternoon patrons in the Berghoff bar, lost in their conversations—plus the restaurant bleed-in of bustling waiters with the clink and clank of dishes—to give us privacy in this public place.

“You know, Nate, a guy in the press-agent game can come in contact with a lot of …
colorful
types.”

That
I got. I pressed my nose to make it go sideways. The universal symbol for mob types.

He nodded, lifted his blond, almost invisible eyebrows. “Right. I guess I’d put Harry Gordon in that camp, though I didn’t know it at first. I met Harry in London, at the Savoy of all places. Met at high tea, would you believe it?”

I said nothing, hoping to encourage less travelogue and more pertinence.

“Harry was doing business with some fellas from France, who needed American representation, and it all just kind of fell into place. Thanks to Harry, I got more business in Europe than ever before.”

“Good for Harry. Good for you.”

Tom sighed as if that were anything but the case. “Later, here in Chicago, Harry introduced me to somebody that I think you know—Jimmy Hoffa?”

That got my attention.

I knew Hoffa, all right. I had worked for him when I was also employed by Bobby Kennedy and the Senate rackets committee. That double-agent period of my life was one I’d been lucky to survive. To this day, Hoffa thought I was his pal. I hoped.

“I was staying at the Bismarck Hotel,” Tom was saying, “trying to land an account with a furniture chain here. Harry took me up to Hoffa’s suite, also in the Bismarck, introduced us, and we chatted about why I was in town, and before I knew it, Hoffa had called up the furniture chain’s owner and…” He shrugged.

“And you had a new profitable client.”

“I did. Before long, I realized that furniture firm was in the pocket of the Teamsters. And those European clients also had ties to the Teamsters. Then there was a fleet of trucks in Florida that I represented that—”

“I get the picture.”

Had he figured out that Harry striking up a conversation with him at high tea hadn’t been serendipity? I didn’t bother asking.

Instead I just said, “So you’re having a case of conscience. You like to think of yourself as a legitimate businessman, and now you’re doing business with Jimmy Hoffa, who has more mob ties than you have silk ones.”

But Tom was shaking his head. “I’m a big boy. I
am
legitimate. Nothing I’ve done for Hoffa or any of the firms he’s hooked me up with has been remotely shady. Hoffa of course doesn’t like having his associations advertised, but that’s not a problem. I know how to get attention for my clients. But I’m also happy to be discreet.”

I shifted feet on the brass rail. “So what
is
the problem?”

“Well…” His boyish face clenched in thought; his eyes were searching. “… I’m a football fan.”

I pretended that wasn’t a non sequitur. “If you’re a Bears fan, you’re in luck. Looks like they’re on their way to an NFL championship.”

His eyes brightened. “The Bears are playing the Philadelphia Eagles this weekend.”

“Well, like you said, they’re on a roll, and good seats for any home game are at a premium. Particularly at late notice. So this morning, at the Bismarck, I had breakfast with Harry Gordon.”

“Okay,” I said, like I was following him, which I wasn’t.

“I figured for once it was nice that I had this kind of, well, underworld connection…’cause who else could get me Bears tickets at this late notice?”

“Ah.” Now I was following. But I was wondering who Harry Gordon was. Not that I knew everybody Hoffa worked with—he had an army. Make that
armies.

Tom held out his hands, palms up. “So I ask Harry if he can land me some tickets, and he says, ‘Piece of cake.’ Then he gets thoughtful, actually thinks for maybe twenty, thirty seconds before he says, ‘But there’s a favor
you
can do
me
.’”

“Well, he takes this number-ten business envelope out of his inside jacket pocket, and he holds it down between us, where only we can see it, opens the flap, and runs his thumb through a stack of crisp one-hundred-dollar bills … at least an inch thick worth.”

That was my cue to whistle, but I didn’t.

Tom paused for a gulp of beer. Then: “After that, he brings the envelope up and licks the flap shut and hands me the fat thing and smiles like a kid sharing a secret. ‘Deliver that to the 606 Club tonight,’ he says. ‘To a guy named Jake who will approach you after you sit down and order a drink. He’ll be a stocky little guy in a nice dark suit with a white carnation.’”

Helfort's War Book 4: The Battle for Commitment Planet by Graham Sharp Paul
What a Westmoreland Wants by Brenda Jackson
Commanding Her Trust by Lili Valente
Cuentos dispersos by Horacio Quiroga
The Prophet's Daughter by Kilayla Pilon
Beneath the Surface by Melynda Price
Darkness & Lies: A Brotherhood Novel (#1) by Salazar, Brandi
Apocalypse (The Wasteland Chronicles, #1) by Kyle West
GirlMostLikelyTo by Barbara Elsborg
Odds on Oliver by Constance C. Greene
Our partner