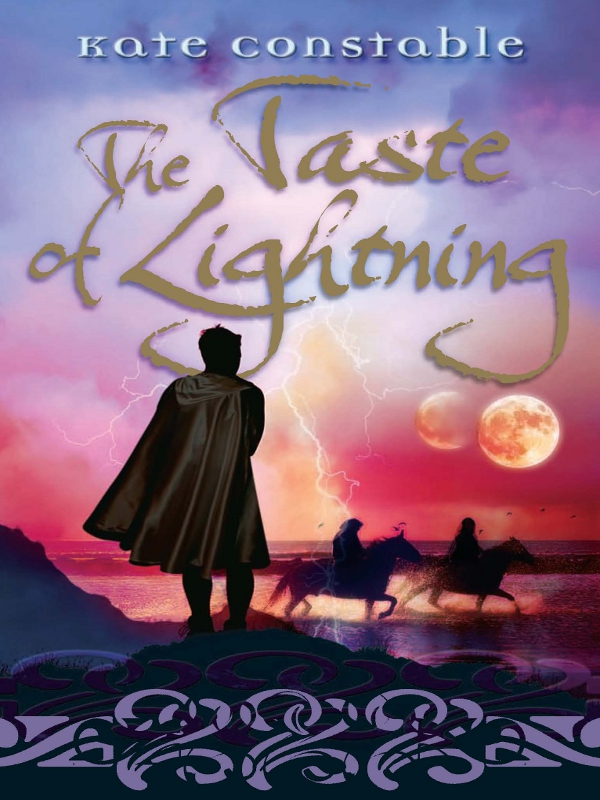 KATE CONSTABLE was born in Melbourne and spent part of her childhood in Papua New Guinea, where her father was a pilot in the Highlands. When she returned to Australia, she knew nothing about TV, football, pop music, fashion or swapcards, but quite a lot about King Arthur, Greek myths and
The Phoenix and the Carpet
. During her childhood she lived in nine different houses and changed schools nine times.

While studying for an Arts/Law degree she worked as a poet's assistant, a doughnut girl at Cowes Bakery, a drinks waitress at the Swagman Restaurant, and for a record company. After a backpacker's tour of Europe, Kate returned to the record company, married her boss, then retired to bring up her two daughters, and write fantasy novels for teenagers.

Her enthralling fantasy trilogy, The Chanters of Tremaris, published in Australia and the US and translated into several languages, has delighted young readers all over the world.

The Singer of All Songs
The Waterless Sea
The Tenth Power 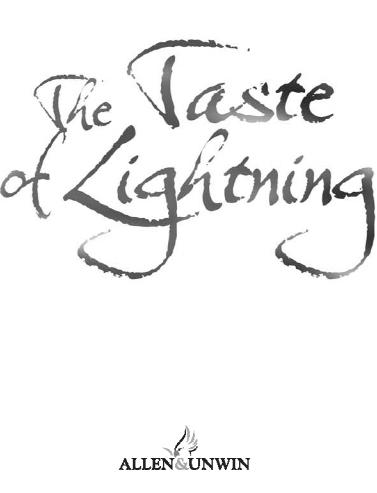 CHAPTER 1: What Happens in Darkness

CHAPTER 2: The Priest-King of Cragonlands

CHAPTER 4: A Hair from His Head

CHAPTER 8: The Fastness of Rarr

CHAPTER 12: Over the Border

CHAPTER 16: The Songs of Fire 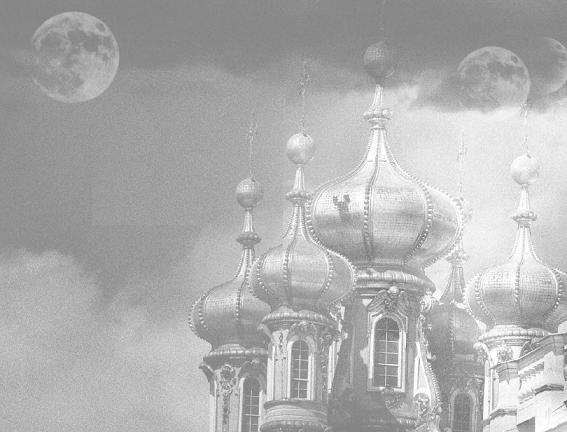 What Happens in Darkness

THE Palace clocks were striking midnight and distant thunder growled from an early summer storm. Tansy hurried to the laundries. She had come this way hundreds of times since she'd first arrived at Arvestel a year ago, but everything looked different at night. There were no lamps to light her path, and the three moons were covered by cloud; if she hadn't known the way so well, she might have lost herself in the warren of stairs and corridors and store-cupboards that made up the servants' territory beneath the Palace.

She was afraid she'd be late. It was bad enough being empty-handed. She didn't have what Lorison had asked for, and she knew that this request was more important than the others. This time Lorison hadn't asked for a mere cake of scented soap, or a tin of boot-blacking. Everyone helped themselves to that kind of thing. But this â this was different, and the fact that Lorison had told Tansy to meet her at night, in the deserted laundries, was proof.

Tansy picked her way across the washing room, feeling for the damp stone of the troughs on either side. During the day, the laundries rang with noise: the grumbling of the women, the heavy slap of wet cloth, the bangs and rattles of paddles and washboards, the gush of emptied buckets. But now Tansy could hear smaller sounds: the steady drip . . . drip of the troughs, the gurgle of pipes.

The ironing room was beyond, with its circle of hearths in their metal cages, and the felt-covered ironing boards. By day it was stiflingly hot in both rooms; often Tansy would leave her work dripping with sweat and steam, her face red, her shirt and pinafore damp from top to toe. But now the great fire in the centre of the ironing room was out, and the night air rushed down the chimney.

âGood girl. No candle, just like I told you.' Lorison's nasal whine came from the doorway. âI've always said you were a good girl, always stuck up for you. The others say you think you're better than the rest of us, but I say no. She's clever, is all. Doesn't belong in service, I say. Deserves more from life than washing other people's underpants, don't you, Tansy?'

Tansy didn't answer. She wasn't sure if Lorison was making fun of her. She knew she was no cleverer than most people. She didn't want to be in service, that was true. Even in well-paid service â and there was none better paid than service at the Palace of Arvestel, the seat of the Royal House, the heart of the Kingdom of Baltimar â you still had to take orders. You didn't own yourself; you weren't free.

âYou got yourself one step nearer to that horse farm of yours tonight, my girl.' Lorison chuckled. âWell, let's see it.'

Lorison's voice sharpened. âYou telling me you ain't got it?'

âI looked out every day â'

Lorison seized her arm and shook it. âYou didn't look hard enough. There must've been something come through the laundries. Ten days I gave you, there must've been
something
!'

There was an edge of panic in the older woman's voice. Tansy tried to shake herself free. âLet go! It ain't my fault.'

âYou think
she'll
care whose fault it is?' Lorison's grip tightened as thunder rumbled around them. âShe won't. It'll be my fault, and your fault, and we'll pay â'

âWho? Who's
she
?' Tansy tried to prise Lorison's fingers from her arm.

âDon't tell me you don't know. Bright girl like you, and you ain't guessed? You think I wanted all that stuff for myself? Who do you think we're working for, girl?' Lorison squeezed Tansy's arm. âThis is all for Madam, for the Witch-Woman.' She lowered her voice and glanced around at the looming shadows. âFor Lady Wanion.'

Tansy tried to back away. âI don't believe you.'

âYou better believe me, girl.' Suddenly Lorison was brisk and ruthless. She dragged Tansy toward the doorway. âCome on. You can tell her yourself. I got no interest in your excuses. You can give your excuses to her.'

âMadam does her business in the dark. She sleeps in the day, like a spider. She's busy now, doing what she does. Ready for visitors.'

âYou going to scream?' sneered Lorison. âNo guard's going to come running for you, girl, not this time of night. Respectable girls oughta be in bed.'

âWhat about you, then?' Tansy had to half-run to keep up with Lorison.

âI got no need to worry. Madam protects me.'

Lorison tugged her round corners, up stairs and into a tangle of dim corridors crammed with objects. Tallboys leaned drunkenly against the walls; giant vases nestled beside mirrored sideboards laden with porcelain. From high brackets, carved lamps threw eerie shadows. Tapestries and curtains whispered in the draught, and behind the faint grumble of the thunderstorm came the chime of ancient clocks as they marked off the quarters of the night.

There was no one about. At this time of night, feasts and concerts had ended; only rust parties gathered here and there in secret corners of the Palace. A group of addicts with their telltale twitches and red-stained nostrils would be seated around the paraphernalia of their drug: the tray, the knife, the sniff-pipe and the lamp. But the rust parties were quiet affairs. If they made any noise, Tansy didn't hear it.

Without warning, Lorison stopped in the shadow of a carved cabinet. âHere's something not many in this place has ever seen,' she said, and she reached behind the cabinet to press on one of the wall panels. It swung open to reveal a set of stone steps that led down into the darkness.

âThis is one of Madam's secret ways,' said Lorison with a hint of pride. âThey run all over the Palace, and out of it, if you know where to look.' She grabbed Tansy's hand and pressed it to the panel, and Tansy recoiled as her fingers traced the shape of a slender-legged spider carved into the wood.

âI'll get it tomorrow, I swear I will!' she whispered to Lorison. âDon't take me to
her
.'

âToo late now.' Lorison pushed Tansy down the steps, and pulled the panel closed. Darkness engulfed them, and Tansy clutched at Lorison's arm.

Lorison laughed, and tugged her forward. With relief Tansy realised that there were torches in these passages, but small, and far apart, with long stretches of suffocating dark between. Tansy was frightened of Lady Wanion, but she was even more frightened of being shut up alone in the dark, and she clung to Lorison's arm as they stumbled from one murky splash of light to the next, round corners, up and down stairs. Sometimes Lorison whispered, âThat way goes to the kitchens â that way leads right out to the picnic pavilion in the woods. Those steps go to the picture gallery. Madam's got her secret ways to everywhere in Arvestel.'

At last they halted before a low door studded with iron bolts. âWe're here,' whispered Lorison, and Tansy smelled the sour whiff of her fear. Lorison raised her knuckles and knocked, two quick raps and two slow.

âEnter,' came a voice from inside, and Lorison lifted the latch and shoved Tansy into the room.

The Academy by Ridley Pearson
El hereje by Miguel Delibes
At Face Value by Franklin, Emily
Adored by von Ziegesar, Cecily
Please Enjoy Your Happiness by Paul Brinkley-Rogers
Rates of Exchange by Malcolm Bradbury
Sherlock Holmes in 2012: LORD OF DARKNESS RISING by Mohammad Bahareth
Beach Winds by Greene, Grace
Sleep No More by Iris Johansen
A Family Christmas by Glenice Crossland
Our partner