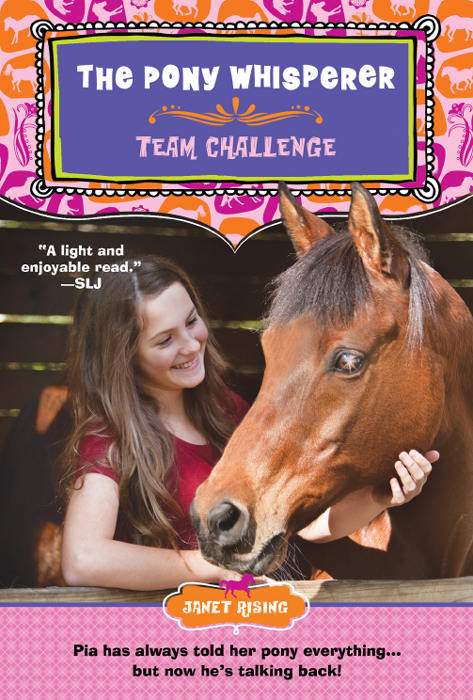 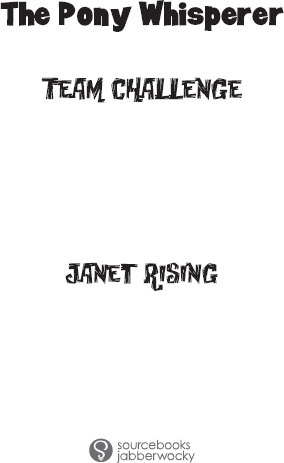 First published in Great Britain in 2009 by Hodder Children’s Books.

To my inspirational friend, Pia

H
ey, Pia,” hissed James, sticking his head over Drummer’s stable door, “lend us You-know-who for a bit, will you?”

“I need to ask Moth why she’s started to drop her hind legs over jumps, taking the poles with her. I bet it’s something I’m doing wrong.” James added, “It always is.”

I handed James the tiny statue of a tiny stone woman sitting sideways on a tiny stone horse that I always, always have hidden safely in my pocket. It’s with me whenever I go to the stable yard where I keep Drummer. Moth is stabled next door to Drum, and no one—but no one—except James and me knows the secret of Epona—code name You-Know-Who—and we’ve both sworn to keep it that way!

“Thanks!” he said, and disappeared to have a talk with his pony. That’s right—a bit of a chat. Because even though her nose is missing and she’s nearly two-thousand-odd years old, Epona (Are you ready for this?) has the power to let whoever is holding her hear what horses and ponies are saying and be able to talk with them.

I know! When I found the ancient homage to the Celtic and Roman goddess of horses and heard Drummer talking to me, I could hardly believe it either. But because of Epona, and because I hadn’t had the sense to keep what I had discovered about the horses and ponies around me to myself, I had been proclaimed the Pony Whisperer, and all hell had broken loose. I’d helped horses and ponies who had problems; I’d upset people by telling them things they didn’t want to hear; I’d even been on TV—twice! Since then, I’ve tried to live it down and escape the public eye because, believe me, being the Pony Whisperer may sound glamorous (I thought so, too, until it all got out of hand), but Epona gets me into the sort of fixes I try to avoid these days.

Avoiding attention has not been one of my most successful ventures.

Of course, with Epona helping James I couldn’t carry on the conversation I’d been having with Drummer, but as Katy and Bean chose that moment to lean on Drummer’s stable door like idiot twins, it was just as well. As Katy has red hair and is shorter than me, and Bean is nothing like her, they don’t look anything like twins, but you get where I’m coming from.

“Pia,” announced Katy, shoving her hair off her face and puffing out her cheeks, “you and Drum have got to be on our team, right, Bean?”

“Yeah, yeah, you’ve sooo got to be,” agreed Bean, beaming at me. Her real name was Charlotte Beanie, but everyone called her Bean. With her height (tall), build (slim), and hair color (blond), she was the perfect match for her elegant palomino pony, Tiffany.

I was delighted they wanted to include me, as I still felt very much the new girl at the yard. Everyone else there had known one another forever, and although my Pony Whisperer title had ensured I hadn’t stayed out of the limelight, I didn’t feel like I was really one of the gang. Drummer had been welcomed with open hooves by his fellow equines—apart from one, whom I’ll tell you about…

“We’re taking the Sublime Equine Challenge,” Katy announced, “and we just need you to complete our team of four.”

“Yeah, we need someone to do the wild card,” explained Bean. “Tiffany and I are doing the show jumping, and Katy and Bluey are our cross-country entry, of course!”

“I can’t wait!” enthused Katy. “It’ll be an opportunity to wear my new cross-country colors.”

“What color are they?” I teased. Katy has a thing, bordering on obsession, about purple, and her last crosscountry shirt and matching skullcap cover would have made a Roman emperor envious. Her new colors were reputed to be even flashier.

When I’d first met Katy, I had been able to tell her— courtesy of Epona—that her chunky blue roan pony Bluey longed to go cross-country jumping. Katy was nervous, but Bluey’s talent soon built her confidence. It was one of my pony whispering successes, before things had taken a downward turn.

“Any chance of starting from the beginning?” I asked them. For an answer, Katy shoved the latest
PONY
magazine under my nose and jabbed her finger on the full-page ad that read:
ARE YOU READY FOR THE SUBLIME EQUINE CHALLENGE?

Yes, I thought, I definitely am. It was the start of summer vacation, and I was looking forward to six weeks of being with Drummer, entering some shows, and going riding, especially with James, as often as I could. Did I mention that James is totally adorable? No? Well, he is. The trouble is, I’m not the only one who thinks so…

Katy shook the magazine impatiently at me. I read on.

The new up-to-the-minute equine-wear specialists Sublime Equine are searching for the top all-around junior riding team in the country. Could that be you? Four riders under the age of sixteen must each compete in their chosen disciplines of Show Jumping, CrossCountry, Dressage, and the Wild Card Event, where anything goes! After regional qualifiers, the finals will be held at the All-American Jumping Course, Brookdale, at the famous U.S. Jumping Derby meeting. All finalists will win a complete riding outfit from the new Sublime Equine Derby range. For full details on how to enter go to www.sublime-equine/brookdale-challenge.com.

“Not so fast!” interrupted Katy, her green eyes flashing. “Bean and Tiff are doing the show jumping—we just told you that, and I’m doing the cross-country—”

“Not that Tiff’s great at jumping, actually, but she’s not bad,” mumbled Bean, interrupting. In the few months Drum and I had been at Laurel Farm stables, I’d discovered that Katy was just like Bluey—positive, bouncy, enthusiastic, and ready for anything. Bean, on the other hand, had her head in the clouds most of the time, which made things interesting. Although, like I said, I’m still the new girl, and I’m just getting to know everyone. It gets super awkward when Catriona turns up because she does nothing to help me feel at home and makes it clear Katy and Bean are her friends. Catriona—let me explain…

“And we thought you and Drummer would be fantastic at the wild card thingy-whatsit,” Katy finished.

“Did you?” I replied doubtfully. “What would we have to do?”

“That’s just it,” said Katy, waving her arms about in her best windmill impression. “Anything you like! Something whacky. Something different. You and Drum will be great!”

I wasn’t at all sure about that and could tell Katy was talking this wild card thing up. She was so like Bluey sometimes, all bouncy and glass-half-full. I’d really much rather do the horse ballet—or dressage as the true professionals called it. “Can’t we do the dressage?” I asked doubtfully.

“Oh, yeah, if you like,” said Bean, pulling her fringe down and staring at it all cross-eyed.

“Dee-Dee’s doing it on Dolly Daydream, remember?” Katy sighed in exasperation at Bean before turning back to me. “With Dolly being so well schooled for the show ring, she’ll be perfect. And, being a dappled gray, she looks glamorous, too.”

I couldn’t help thinking it would be pretty amazing to make up a team and get to Brookdale. I’d gone to the famous arena with my old friend Kirsten to watch the Pony Club Championships one year (mainly because spectators got in free!). I had been terribly jealous of the winners in their Brookdale sashes and couldn’t imagine how fantastic it would be to compete there. I daydreamed about riding Drummer in the famous arena. What a wow that would be—one of my more fantastic ambitions ticked off! Plus, I’d seen some of the riding outfits the new company Sublime Equine produced, and they were pretty good. Not all stuffy, but modern and snazzy in great colors. I really liked the idea of myself dressed from head to toe in some classy garb I couldn’t ordinarily afford. I supposed I could think something up for the wild card event. How hard could it be? Besides, I was tickled pink to be included—it seemed I was becoming one of the gang.

“OK,” I said. “Drum and I are up for it!” I expected to hear some comment from Drummer, who was standing behind me tugging at his feed bag, but then I remembered that while James had Epona, Drummer and I were
incommunicado!
It was really peaceful, actually.

“What for?” asked Bean, yawning. We both gave her a look, and she gulped. “Oh, yeah, the challenge. Good idea.”

Their work done, Katy and Bean pried themselves off my stable door and disappeared, leaving me to carry on grooming Drummer.

Now Drummer, I have to tell you, is so the best pony. He’s a bright bay gelding without any white on him whatsoever. I used to think he was cute and cuddly and well, you know, nice, but Epona soon let Drummer put me straight—you’ll see what I mean when I get Epona back.

“Here,” whispered James, leaning over the door and furtively handing me Epona. “Thanks.”

The moment Epona was in my hand I heard someone humming to themselves. It was tuneless and rather horrible, so I tried block it out.

“Was it me what?” James’s dark blond hair flopped over one eye. It’s just the right side of being too long.

“You know, causing whatever Moth was doing wrong.”

“Oh, yes, of course it was. She says I’m sitting back too early as we land after the jumps, and that makes her drop her hind legs onto the pole. She can’t help it. I have to sort myself out as we’re going in for this Sublime Equine Challenge thing.”

“Are you? Who are you with?” I wished James was on our team, but remembered that we already had four team members.

“Leanne’s team,” said James. “Leanne is the dressage diva, of course. Cat asked me if I’d do the show jumping— which is why I need to fix my jumping form.”

“Who’s your fourth team member?” I asked. I felt slight stirrings of annoyance by the fact that James and Cat were on the same team together and the tuneless singing wasn’t helping.