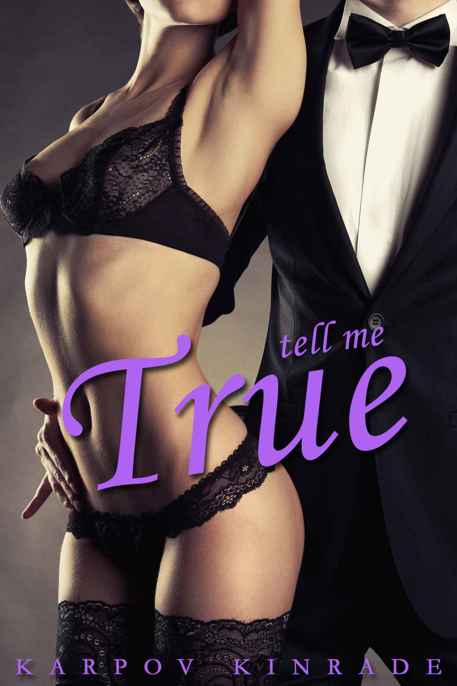 Edited by Anne Chaconas at B.A.M.

You may not use, reproduce or transmit in any manner, any part of this book without written permission, except in the case of brief quotations used in critical articles and reviews, or in accordance with federal Fair Use laws. All rights are reserved.

This eBook is licensed for your personal enjoyment only; it may not be resold or given away to other people. If you would like to share this book with another person, please purchase an additional copy for each recipient. If you're reading this book and did not purchase it, or it was not purchased for your use only, please return to your eBook retailer and purchase your own copy. Thank you for respecting the hard work of this author.

This is a work of fiction. Names, characters, places and incidents are products of the author's imagination, or the author has used them fictitiously.

For being the most badass publicist and editor and friend

About Tell Me True

Tell Me True
is the final book in the
Call Me Cat Trilogy
. You can get the first book
here
, and the second book
here
.

1 – Happily Ever After – PRESENT DAY

5 – The Elephant In The Room – PRESENT DAY

8 – The Wrong Davenport – THREE MONTHS AGO

12 – Expect the Unexpected – TWO MONTHS AGO

32 –Bloody Omens – AT THE FIRST WEDDING, JUST BEFORE THE EXPLOSION

35 –Behind Every Great Man… - PRESENT DAY

Chapter One
Happily Ever After
PRESENT DAY

PEOPLE SAY YOU
fall in love, like you might fall into a puddle or a ditch. I think love is a choice, mostly. There are some hormones and pheromones involved in attraction, but love, the act of loving another person—that's a choice you have to make every day. The best kind of love is slow-burning and long-lasting. Which scared me, because the love I felt for Ash was blazing hot and burned so bright I worried it would consume me in it.

My hand shook as I fiddled with the rhinestones that formed an intricate design on my one-shoulder garza wedding gown.

Bridgette slapped my hand away as she artfully arranged the curls of my dark hair around the glittering head circlet with a teardrop diamond that rested in the center of my forehead. "You look amazing. Like you just stepped out of a bridal magazine."

I didn't reply. My throat had gone dry and I sipped on a bottle of water through a straw so I wouldn't mess up my lipstick or makeup. It felt too caked on
and the dress, while stunning, made me nervous. A custom-made Vera Wang. One-of-a-kind. It had been made just for me by the most famous wedding dress designer in the world. That made my head spin and I was terrified I would spill something on it and destroy it forever.

I'd endured every fitting like a statue, scared to move for fear I'd rip the delicate silk, and now the day was here and I should be excited. I
was
excited. And nervous. Scared. And excited. Did I mention excited?

Twisting my engagement ring, which had been moved to my right hand
in preparation for the exchange of wedding bands, I gingerly paced the dressing room of the posh Boston hotel. I didn't dare put on my heels, also custom-made to match the dress, until it was time. Nightmares of breaking my leg walking down the aisle had haunted me for weeks.

My phone beeped and I nearly tripped over my train reaching for it before Bridgette could grab it.

You looked beautiful last night at the rehearsal dinner.

My heart skipped a beat as I erased the text. Jon shouldn't be texting me like this. I'd have to talk to him. Again.

"Who was that? Prince Charming?" Bridgette turned her back to me so I could zip her into the pale blue bridesmaid dress she'd picked out specifically to match her eyes.

"Nope. But could you go and check on everything? See if people are here yet?"

She paused, scrutinizing me. "Are
you
okay?"

"Yes. I just don't like to be the center of attention. You know that. And we invited
so many people."

"
It's the wedding of the century. Most Eligible Bachelor marries the girl who not only survived, but ended the Midnight Murderer. You're lucky the Davenports managed to keep the numbers as low as they did." Bridgette smiled as if we were talking about which flavor cake to order for the wedding.

She'd helped end the Midnight Murderer
, too, and it had left its mark on us both. I could see it in her overly cheerful demeanor whenever anything got too serious. At least it was over. She'd gotten some help after shooting—and killing—the woman who nearly destroyed my life, and nothing bad had happened in six months. We could finally move on with our lives.

Bridgette ducked out of the overly feminine room, leaving me alone and at a loss. I didn't want to sit and wrinkle my dress, so I paced the peach floor again, scrolling through texts and deleting everything from Jon.

A knock on the door startled me and I dropped my phone. Ash came in, closing the door behind him, and picked up my phone without taking his eyes off me.

I blushed under the attention. "Isn't it bad luck to see the bride before the wedding?"

He stood, his broad shoulders filling out the black tux perfectly. His dark hair, always a bit disheveled, refused to stay in place, but that only made him more handsome in my book. I placed a hand on his chest, my French manicure making a nice contrast against his lapel.

He traced a line down my cheek with his finger, careful not to mess my makeup. "I had to see you first, before the rest of the world got to." His breath hitched. "You look… angelic. I can't believe I finally get to be your husband."

A lump formed in my throat. I loved this man beyond words. It had only been six months since he asked me to marry him, but in that time we'd fallen more deeply in love than I could have imagined. I'd give anything to spare him more pain and heartache in his life and I prayed that loving me wouldn't add to his burden.

"It's not too late to run away and have a private wedding somewhere remote," I said with a small smile.

He laughed. "I think my family and all of our friends would have something to say about that."

"Yes. Well, except Jon. I've been trying to reach him. You'd think the best man would be on time to his brother's wedding."

I ran the pad of my
index finger over the worry line in his forehead. "He'll be here. Making him the best man was the right thing to do."

Ash leaned in to kiss me but I pushed him away. "Do you have any idea how long it took to put this face on? Bridgette will kill me if I let you ruin it." I wanted to kiss him
, though. Wanted to wipe off the face and pull off the dress and lay in his arms with the sounds of a tropical rainforest as our backdrop.

Later. That would have to wait for later. First, we had a wedding to get through.

And when I caught a glimpse of us standing together, his hand around my waist, I smiled. We
did
look like a fairytale couple ready to live happily ever after.

Bridgette rushed back in
, breathless. "It's time!" She frowned at Ash. "You're not supposed to be here."

"It's my right to see my bride first."

The three of us walked out of the hotel and toward the gardens where the ceremony would take place. Ash and I waited, out of sight of the guests, as Bridgette got everything and everyone in place.

Jon ran toward us from the parking lot, out of breath but smiling, his golden-boy-blond looks a stark contrast to his brother's darker
coloring. Two men, both so handsome and both so very different from each other in nearly every way. "I told you I'd be here on time," Jon said to a frowning Ash.

"You're not on time. You're late. Do you have the rings?"

Jon patted his jacket pocket. "Shit! I left them in the car. I'll be right back."

The wedding music began and I knew we were supposed to start walking soon, but Jon needed to be at the front before then.

Ash and I had agreed to toss aside convention and walk down the aisle together, since, one: I didn't believe in being 'given away' by one man to another and found the whole notion entirely outdated, and two: I didn't have a father to give me away. Mr. Davenport and Professor Cavin had both offered, but this felt right to Ash and me. We were entering marriage together, as equals, it made sense that we would approach the altar that way.

I peeked around the bushes we were hiding behind to admire the rows of white chairs and the towering floral arrangements of wild orchids that lined the
pebbled path toward the priest who waited patiently on the small stage. Hundreds of flickering candles surrounded by fragrant flowers lit the way to a floral arch under which we would say our vows. Music filled the air, a lilting and almost sad song in a minor chord, played on a grand piano by an older woman dressed in a bright fuchsia taffeta that had probably been present to many weddings in the last three decades.

In a few minutes I would officially be Catelyn Travis-Davenport, married to the most amazing man I'd ever known.

I was turning to Ash, eyes misting with tears, to tell him what this moment meant to me, when an explosion blasted behind us, throwing bits of metal and heat in our direction.

I dropped my bouquet and spun around as a second explosion obliterated what little was left of Jon's car.

With Jon in it.