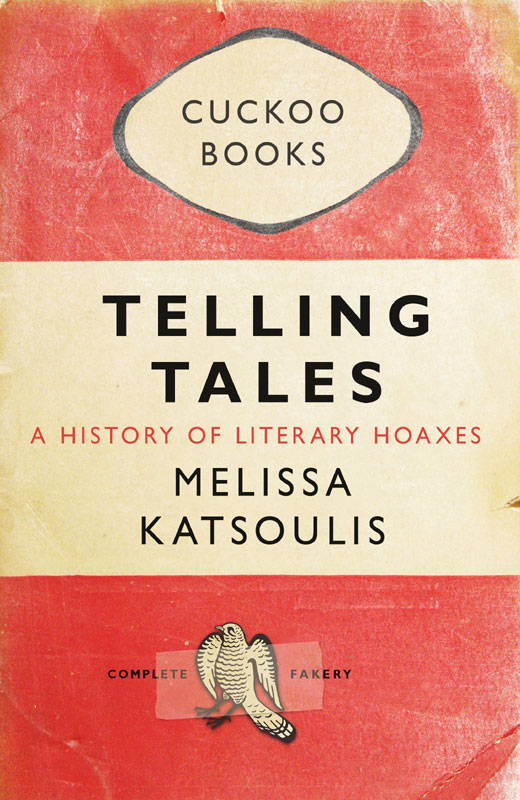 Melissa Katsoulis
is a journalist and writer. She has written for
The Times
, where she also worked on the books desk, the
Sunday Telegraph
, the
Financial Times
,
The Tablet
and the
Ham and High
. She lives in London.

A HISTORY OF LITERARY HOAXES

First published in the UK by Constable,
an imprint of Constable & Robinson Ltd, 2009

The right of Melissa Katsoulis to be identified as the author of this work has been asserted by her in accordance with the Copyright, Designs and Patents Act 1988

The extract on page 61 is from
Prince of Forgers
by Joseph Rosenblum, 1998, Oak Knoll Press

Publication data is available from the British Library

Special thanks to Gina Rozner, without whom this book would not exist, and also to Andreas Campomar and everyone at Constable. I am grateful to Margaret Body, Giles Coren, Alison Flood, Chaz Folkes, Ivan Helmer, Nicolas Madelaine, Angela Martin, Neel Mukherjee, Michael Prodger, Pete Rozycki, Jerry Sokol, Guy Stevenson, Erica Wagner, Carl Wilkinson. And to Peter Stevenson: the greatest living Greek Scotsman and the love of my life.

F
ROM DISGRUNTLED MORMONS
and fake Native Americans to bored students and lustful aristocrats, the bizarre history of literary hoaxers is every bit as revealing as the orthodox roll-call of Western writers, as is their acute appreciation of what inspires, frightens and resonates with their generation. And their stories are often incredibly funny, too.

This history of the most notable literary hoaxes does not claim to be comprehensive: some well-loved tricksters such as Henry Root and Rochester Sneath have been left out because they seem, on reflection, to be more practical jokers than true hoaxers. Others, like Thomas J. Wise and James Collier, are not included because their rather pedestrian projects must be called forgeries rather than hoaxes. And although it begins in the eighteenth century – the age of the novel and the era when being a publisher or author offered, for the first time, a real chance at what Samuel Johnson called ‘the fever of renown’ – cases of writers playing games with authorship and authenticity can be traced as far back as the fourth century
BC
.

Some were hoaxing for their own amusement, as was the case with the philosopher known as Dionysius the Renegade, the earliest hoaxer literary history records. He was the spirited rebel Stoic who, after breaking away from the school which had raised him to believe in the nobility of pain and suffering, manufactured a fake Sophocles play called
Parthenopaeus
and inserted into it a number of insulting acrostics including ‘
HERACLIDES IS IGNORANT OF LETTERS AND IS NOT ASHAMED OF HIS IGNORANCE
’.

Others, such as the unknown author of the famous
Donation of Constantine
, hoaxed for political gain: that two-part document comprising the
Confessio
and
Donatio
which was inserted into a twelfth-century book of canonical law purported to confirm the Emperor Constantine’s gift of European dominion to the church in return for Pope Sylvester curing him of leprosy and revealing to him Christ’s love.

To understand the significance of the stories collected here (most of which can and should be read as much for sheer amusement at the amazing lengths to which people will go to practise a deception, and the sheer nonsense gullible readers are willing to swallow, as for literary-historical edification) it is useful to consider the three main types of hoax, and the thorny subject of truth-telling in literature more generally.

Not all hoaxes are equal and although the ones chosen for inclusion in this book are arranged chronologically within chapters, they might just as easily have been broken down into the three distinct groups that most hoaxes can be said to fall into. The American academic Brian McHale, one of the surprisingly few literary theorists to attempt a comprehensive taxonomy of the written hoax, has identified these groups as: the genuine hoax, the entrapment hoax and the mock hoax.

Into the first group fall the majority of examples, and nearly all of the very famous ones. The Hitler Diaries, the Ossian poems, William Ireland’s Shakespeare papers and the
Donation of Constantine
can all be given McHale’s playfully oxymoronic label ‘genuine hoax’ because they are dishonest literary creations which are intended never to be exposed. They might be done for reasons of financial, ideological or emotional gain, but they are neither self-conscious works of art nor are they intended to poke fun at specific individuals or institutions. The perpetrators of these hoaxes tend to be unfortunate creatures who have been unable to find success with their legitimate works and who are desperate either for the money or recognition that literary success can bring. The eighteenth century’s William Ireland is a prime example: he was a boy growing up in London amidst the 1790s frenzy for collecting and classifying European cultural artefacts. Studiously ignored by his bibliophile father, he was considered dim and hopeless and forced into a humble clerking job which he hated. Yet on the day he first presented his Shakespeare-obsessed parent with a piece of paper purporting to bear the bard’s signature, all his life’s problems began to evaporate. Overnight, he became the focus of his father’s undivided attention, praised for his brilliance in sourcing and negotiating deals for the series of Shakespearean papers he was secretly producing using antique paper and specially mixed ink.

Genesis by Karin Slaughter
Vespers by Jeff Rovin
My Heart's Bliss (Hard Love & Dark Rock #3) by Ashley Grace
Captain Future 23 - The Harpers of Titan (September 1950) by Edmond Hamilton
The Chimera Sequence by Elliott Garber
El Capitán Tormenta by Emilio Salgari
The Painting by Schuyler, Nina
A Burn To Bear (Fire Bear Shifters Book 3) by Sloane Meyers
In Bed With the Opposition by Stephanie Draven
Testament by Nino Ricci
Our partner