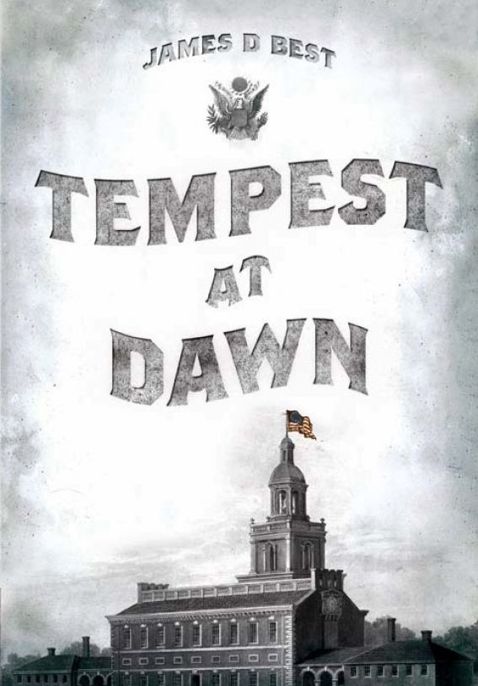 "This is a fast paced tale with an
interesting hero ... you’ll certainly find enough twists and turns
to provide an entertaining and exciting story."—Western Writers of
America, August, 2008

"A great book, I do hope
that
The
Shopkeeper
gets the readership it
richly deserves."—Simon Barrett ,
Blogger
News Network

"I loved it! The story is told in such a classic,
smooth tone--it's really fast paced throughout."—Jonathon Lyons,
Lyons

Praise for The Shut Mouth Society

Praise for Tempest at Dawn

"This is an important story told in
a lively fashion.
Tempest at
Dawn
might be the ideal way of
introducing the American public to the gripping story of how our
Founding Fathers gave birth to our constitution.”—Jon Bruning,
Attorney General, Nebraska

Copyright © 2009 James D. Best. All rights
reserved. No part of this book may be reproduced or retransmitted
in any form or by any means without the written permission of the
publisher. This ebook is licensed for your personal enjoyment only.
This ebook may not be re-sold or given away to other people.

Discover other titles by James D. Best
at
http://www.smashwords.com/profile/view/jamesdbest

“The infant periods of most nations are
buried in silence, or veiled in fable, and perhaps the world has
lost little it should regret. But the origins of the American
Republic contain lessons of which posterity ought not to be
deprived.”
James Madison

In July of 1776, thirteen North American colonies
declared their independence from Great Britain. Fighting had
actually started a year earlier at Concord and Lexington with “the
shot heard ’round the world.” War continued for seven more years
until, on September 3, 1783, the Treaty of Paris finally
legitimized the sovereignty claims of the United States of America.
At that time, the thirteen former colonies considered themselves
independent states loosely connected for self-defense.

The Articles of Confederation, the first United
States Constitution, proved barely adequate during the imperative
of war and a failure in peacetime. Within a few years, the military
had been reduced to near extinction, depression and hyperinflation
sapped hope, insurrection sprang from civil injustice, a confused
government tottered perilously close to collapse, and European
powers hovered like vultures, eager to devour the remains.

In the summer of 1786, a convention at Annapolis
collapsed without making any recommendations to our enfeebled
government. James Madison and Alexander Hamilton attended the
aborted Annapolis Convention and made a pact to promote another
national conference the following summer. In May of 1787,
fifty-five men came to Philadelphia with a congressional charter to
revise the Articles of Confederation.

Anxiety woke me before dawn. Rolling to my
side, I pulled the heavy quilt over my exposed ear. Was I ready?
Had I prepared sufficiently? Would the old man reveal what I had
come here to learn? He was stubborn and had frustrated many before
me.

Eventually I stirred and made my way to the
lamp. I fumbled to light it, then held quiet, alert to any noise in
the house. Nothing. I started to dress.

I had arrived the previous night, eager to ask
questions, but the old man had sent me to bed, explaining that he
thought more clearly in the mornings. Now I knew this was
fortuitous. If I had charged ahead, I would have blundered and
disclosed my true objective. The old man knows secrets and he has
documents
—
documents he has
kept hidden from public view for fifty years. I counseled myself to
be patient and approach my subject obliquely.

The events that concerned me had occurred
fifty years ago, when the old man was thirty-six. He would die
soon, the last witness gone. Powerful men had gathered, met in
secret, and plotted to overthrow a government. When he died, no one
would be left to expose what had happened behind those locked
doors.

I grabbed my coat, intent on a brisk walk to
clear my mind. Just before opening the bedroom door, I stopped. I
had traversed the path only once. I decided to leave the lamp lit,
so the spill of light would help me navigate the landing. The front
door stood directly in front of the stairs, so if I found the first
step, I should avoid stumbling.

Escaping the house, I discovered enough
nascent light to guide my way. At the back of the estate, a
horseshoe-shaped garden greeted me. Flowers and ornamental shrubs
bracketed vegetables, fruit trees, and grape arbors. The garden
appeared withered, prepared for winter’s dormancy, but its general
neatness still impressed—four acres of unruly nature rigidly
ordered and groomed to match the taste of its owner.

The morning chill chased me back toward the
house. A thick forest girdled a vast arc of grass spilling across
the front acreage. Stately white pines lined the approach road, and
clusters of trees occasionally broke the uniformity. I took a deep
sniff and smelled wet foliage that carried a hint of decay.

A noise from the porch drew my attention to
the mansion. I saw two people work their way across the porch. The
old man shuffled unsteadily as he clung to a strong black arm. The
manservant slipped a hand under the old man’s elbow and lowered him
into his rocker. When he had settled, the patriarch sat back to
allow his servant to spread a heavy blanket across his lap.

I stood silently and watched my host tuck
the blanket tight against his legs. Kneading his rheumatic hands,
he gazed at the rolling mountains in the distance. Before I could
decide how to signal my presence, the mistress waltzed onto the
porch, breaking the old man’s reverie.

“
James, I know you love your morning
ritual, but it’s far too chilly for you to be out here. Come. I’ll
help you move into the sitting room.”

“
I’m bundled warmly. If you want to
ward off my chill, hurry Sukey with my tea.”

“
Sukey’ll be here shortly,” she said,
one hand on her hip, “I won’t argue, but may I remind you that you
barely made it through last winter? Just think how disappointed
you’ll be if you can’t read your books.”

“
Clever, my dear, but I’m
staying—although, I might expire right here if I don’t get my
tea.”

“
I’ll see what’s keeping Sukey, but
breakfast will be served in the dining room.” She threw this last
over her shoulder as she retreated into the house.

The subject of my investigation looked small
enough that a soft breeze could tumble him away with the autumn
leaves. How could such a frail man rouse his partisans and enemies
to such passion? His soft voice furnished not the slightest hint of
authority.

Yet he somehow struck an imposing figure,
sitting exquisitely still in his black silk gown, black gloves, and
tight-fitting skullcap. Sharp, birdlike features and a stern
expression erupted from the dark garb. The tiny man, reputed to
have an enormous intellect, still possessed eyes that promised an
alert mind.

My hesitancy allowed another player to enter
the scene, a petite black woman who emerged from the house
balancing a large tray with tea service. The old man acknowledged
her with a faint nod. The woman served the tea with an élan gained
from years of experience. She arranged a second cup. Was this meant
for the woman of the house or me? The aroma spurred me to
action.

As I walked toward the porch, the man’s wife
reappeared. I stopped—one foot on the first step—waiting for the
appropriate moment.

My host glanced at his wife and said to his
servant, “Sukey, set breakfast up out here. I don’t think we’ll
have many more mornings to eat outside.”

“
James, we’ve already discussed this.
Breakfast will be served in the dining room. Sukey, tell Paul to
put fresh logs on the fire.”

Whirling around, the wife nearly bumped into
me. “Oh, good morning, Mr. Witherspoon,” she said. “I hope you
slept comfortably.”

I turned toward my host. “Good morning, Mr.
President.”

I sat opposite the wisp of the once-great
man. “You have a wonderful and gracious home. This is my first
visit to Virginia, and it’s as beautiful as I had imagined.”

“
I’ve traveled to New York and New
England, but this is my first visit to the South.”

“
The South is different, but you’re
not. I’ve read everything you’ve written, and I’m impressed by how
much you think like someone from the North.”

“
I presume you meant that as a
compliment?”

“
Of course. Your roots are in
Virginia, but your thinking and erudition reflect that you were
schooled in the North.”

The old man sat quietly for a moment. “Have
you secured a publisher?”

“
High interest. I need only to present
a novel view that applies to current politics.”

“
The views of an actual participant
would be novel.”

The old man settled back ever so slightly
into his chair. “My home has hosted historians, politicians, and
other eminent people, but your visit is special. I look fondly back
on my days at the College of New Jersey and the Reverend Doctor
Witherspoon. I owe a great debt to your grandfather. You should be
proud.”

These comments from James Madison pleased me
more than I would have expected. “Thank you, sir. I struggle to be
worthy of his name.”

“
Where do you wish to
start?”

“
A difficult question. So little is
known. Was it necessary to keep the proceedings secret?”

“
Neither nations nor children should
be conceived in public.”

I was taken aback. “You supported
secrecy?”

“
As a historian, I disagree. Secret
cabals should not design governments. The Constitutional Convention
should have been open.”

Madison gave a little laugh. “Jefferson
agreed with you. He said that secrecy represented an abominable
precedent that could be justified only by ignorance.” The sun had
fully emerged, and Madison paused to take in the Blue Ridge
Mountains, now awash in fall color. When he again made eye contact,
he spoke as if there had been no interruption. “Mr. Witherspoon, if
the convention had met publicly, it would’ve stifled debate.
Private deliberations allowed the kind of raucous exchanges that
illuminate hard choices.”

“
Why haven’t you disclosed the details
of the proceedings?”

“
Our work should be judged by the
outcome, not the process.”