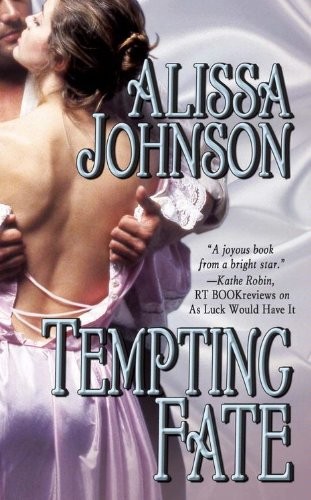 For Ty Johnson and Brandon Hudson, because you cooked
nearly every meal I ate for a year. Chumps.
Love you.

“My eyes are the color they’ve always been,” Mirabelle said. “Maybe they’re a slightly different hue when I’m angry.”

“And I’ve only ever seen them angry,” Whit noted with a nod. “Why is that, imp? Why have we never gotten on at all before now?”

“You said once it was fate,” she reminded him.

“Ah, yes, the divine ordinance argument. Clever of me.”

He stopped the horses suddenly and turned in his seat to look at her. “I don’t believe in fate, actually.”

“No. Aside from the inescapable realities of birth and death, we’re responsible for the paths our lives take. We each make our own choices.” He bent his head and whispered against her lips. “And I choose to do this.”

It was Mirabelle’s very first kiss.

It was everything she imagined a kiss would be—and absolutely nothing like she would have expected a kiss from Whit to be—not that she ever allowed herself to imagine kissing Whit. But if she had it would have been forceful and—

Whit pulled back until he could see her eyes. “Stop thinking, imp.”

She reached out, took hold of his cravat, and brought him closer. “Stop talking, cretin.”

Other
Leisure
books by Alissa Johnson

T
here is no messenger quite so unwelcome as the one who comes bearing the news of death.

William Fletcher rather felt he ought to know.

To date, he had been present at more than a dozen such deliveries.

But he hadn’t been made to feel unwelcome at Haldon Hall. On the contrary, upon his arrival William had been told by the countess that the earl was out—as he almost inevitably was—then she had sat him down, poured him tea with a generous splash of whiskey, and politely turned her head when his young voice cracked with grief.

It was no mere colleague’s death he heralded today. It was a friend’s.

“Will you speak to the boy, or shall I?” the countess asked from where she’d taken up a position by the window.

He knew what, or rather who, she was watching—her son, Whittaker Cole, heir to the Earl of Thurston. Whit was lining up tin soldiers on the lawn with Alex Durmant—the newly orphaned Duke of Rockeforte.

“I would prefer…” He cleared his throat. “That is, I would very much like to speak to Alex myself, if you could see your way to allowing it.”

She shot an annoyed look over her shoulder. “You are as much his family as I, William.”

“I…I should have been quicker. I could have—”

“Posh and nonsense. The duke knew the risks of working for the War Department, just as every Rockeforte has”—she returned her attention to the children outside—“and will. Do you mean to honor his final wishes?”

“It’s ridiculous you know, a grown man playing matchmaker.” She crossed the room to sit beside him.

Her lips curved into a fond smile. “He was a consummate jokester. It seems fitting that he should have died with a laugh. He neglected one small detail, however.”

“What detail would that be?” And if his voice betrayed some hope at the possibility of being released from a very troublesome vow, it couldn’t be helped.

“Two of those children have a mother…with definite plans of her own.”

William was spared from a response when the front door swung open and an argument poured inside.

“You crushed them to pieces, imp!”

“Well you shouldn’t have left them scattered about willy-nilly in the grass, cretin!”

“They were not scattered willy-nilly. They were
positioned!
”

“For the advanced raid, you—!”

At the countess’s surprisingly robust shout, the voices quieted and moved off down the hall.

She cleared her throat delicately and picked up her cup of tea for a sip.

T
here was some disagreement regarding the origins of the long-standing and bitter feud between Miss Mirabelle Browning and Whittaker Cole, the Earl of Thurston.

The lady in question was of the opinion that the discord had begun the first time the gentleman—and she used the term most loosely—deigned to open his mouth and thereby proved himself to be an ass.

The gentleman—loathe to be outdone—argued that the dislike had appeared directly upon sight, which was an obvious indication of fate. And as providence was the domain of the Heavenly Father himself, any and all unseemly behavior toward Miss Browning on his part was clearly an indication of the Almighty’s disfavor with the lady, and he but an instrument of God’s wrath.

The lady felt this opinion argued strongly in favor of the gentleman being an ass.

Some said it all began when a young Mirabelle caused the slightly older Whit to fall headfirst out of a rowboat in front of the lovely Miss Wilheim, who promptly slipped and fell overboard herself, putting an end to their brief but dramatic romance. Others maintained that the whole business had started when a mischievous Whit had put a large bug down the back of Mirabelle’s dress during a musicale, causing the girl to jump, scream, swat madly, and otherwise endanger the people around her.

Still others insisted they really had no care for when or how it had all begun, merely that they wished it to end. Immediately, if not sooner. Everyone, however, was in accord over the fact that the two, quite simply, did not get on.

So infamous was their rivalry, that had anyone been watching as the two of them scowled at each other over a dandy horse on the back lawn of Haldon Hall, the Thurston estate, he or she would have sighed in resignation even while beating a sensible, and hasty, retreat to safety.

Fortunately for the group of people currently attending the house party, Whit and Mirabelle stood alone, each with a hand on the new wheeled contraption and, much like two children fighting over a toy, each equally determined to gain sole purchase.

As a sensible and—under most conditions—respectably reserved young woman, Mirabelle was perfectly aware of the ridiculousness and pettiness of the situation. As an honest young woman, she could admit that very little else would suit her current mood quite so well as the ridiculous and petty.

A rousing good argument was just what she needed. As always, Whit was more than willing to oblige.

As was his habit when truly annoyed, Whit clenched his jaw when he spoke. Mirabelle was fond of pointing out that the resulting muffled effect took something away from the impact. Just now, however, she was feeling a bit more mulish than witty.

“I see no reason I should,” she retorted, tipping her chin up.

“Likely because you couldn’t see reason if it were perched on the end of your nose.” He gave the horse a tug, which only succeeded in making her dig her heels into the soft ground. “You don’t even know how to use it.”

“I certainly do. One sits there between the two wheels,
holds on to the bars, and pushes with the feet. I’ll show you—”

A mere ten minutes ago, she hadn’t given a single thought to riding the blasted thing. She’d merely been curious about it. But while she’d been standing there in the warm sun, amusing herself by turning the machine this way and that to discover how it was all put together, Whit had come round the house and ordered her,
ordered
her, not to get on it.

She’d taken a good look at him, with his light brown hair tousled by the breeze, his cool blue eyes sparking, and his aristocratic features set in grim lines. Every inch of his tall, lanky frame spoke of power that took root in wealth, title, lands, and the sheer luck of having been born a man. The very same sort of power her uncle used to keep her under his thumb.

And she decided she wanted to ride the damn thing after all.

“You said it was for guests, cretin,” she pointed out.

“You’re not a guest at Haldon.”

She let go and stepped back, completely stunned by six words that meant more to her than he could possibly know. “I…that is the
kindest
—”

“You’re an affliction,” he clarified, hefting the horse up. “Like dry rot.”

She lunged and grabbed hold of the seat with both hands.

A brief tugging match ensued. Whit was stronger, of course, but he couldn’t very well pull the horse from her tight grasp without possibly doing her an injury. And while Mirabelle considered him a flawed man—a very, very flawed man—she knew he wouldn’t go so far as to risk causing a woman bodily harm. She took some satisfaction in knowing,
at the moment, he was likely chafing at that particular code of honor.

Resigned to the fact that she wasn’t going to be able to pull the horse away from him, she briefly considered simply tugging as hard as possible before letting go abruptly, with the hope he’d fall hard on his backside. But when a door behind Whit opened, and she caught a glimpse of bronze silk and gray hair, she decided on a different plan.

She let go, took a step back and put her hands up, palms out. “I couldn’t
possibly,
Whit. Please, I don’t think it’s safe.”

“Whittaker Vincent! Are you encouraging Mira to ride that ghastly machine?”

At the sound of his mother’s voice employing that time-honored and dreaded phrase—the first and middle name—Whit paled, then flushed, then narrowed steely eyes at Mirabelle.

“You’ll pay dearly for this,” he hissed.

Probably so, she conceded. But it would be well worth it.

Whit turned and smiled at his mother. She was a small woman, with the blue eyes of her children and the rounded features she inherited from her father. Demurely dressed, rosy cheeked, and soft of voice, she often reminded people of a kindly aunt or younger version of their dear grand-mama. It was a misleading impression Lady Thurston had long ago learned to use to her full advantage.

Whit swallowed hard. “Of course not. I was—”

“Are you insinuating I am old?” Lady Thurston inquired.

“I…” Confused, wary, Whit fell back on charm. “You are the picture of youth, Mother.”

“Very prettily put. But are you certain? Nothing wrong with my hearing, then? My eyesight?”

There was a pause as he recognized the trap, and then another
as he realized there was nothing he could do but walk into it. Mirabelle was hard-pressed not to laugh out loud.

“Not a thing, I’m sure,” he finally managed.

“What a relief to hear it. For a moment, I thought perhaps you were going to tell me I had misread the situation. That can happen, you know, as one ages and the senses begin to dull. Very confusing, I imagine.”

Hitched (Imperfect Love Book 2) by Kendall Ryan
Eden Hill by Bill Higgs
The Perfect Gift by Raven McAllan
Driven by Desire by Ambrielle Kirk
Juegos de ingenio by John Katzenbach
(My Travels with) Agnes Moorehead – The Lavender Lady by Benedetti, Quint
The Inn Between by Marina Cohen
Ridin' Her Rough by Jenika Snow
Taste of Lightning by Kate Constable
Bloodstone by Barbra Annino
Our partner