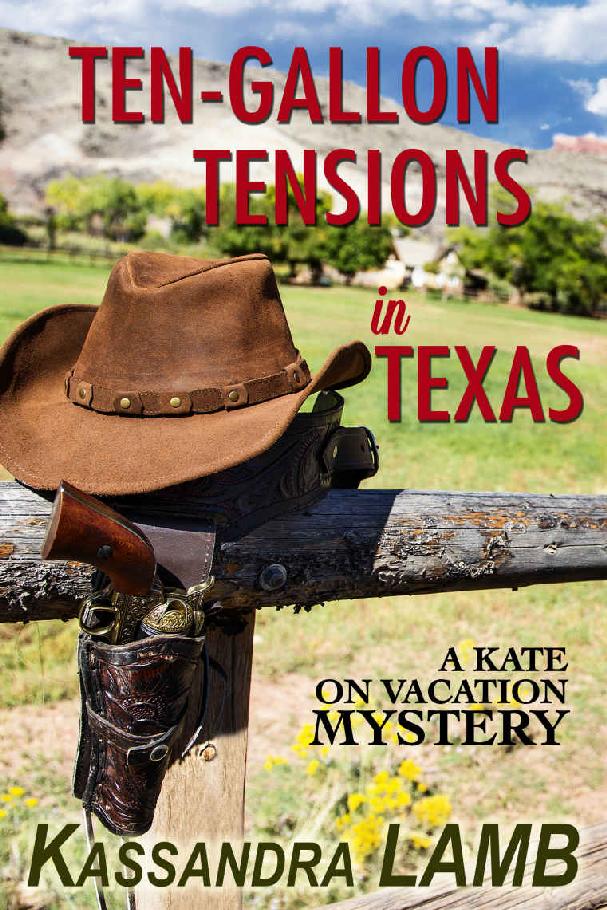 A Kate on Vacation Mystery

All Rights Reserved. No part of this book may be used, transmitted, stored, distributed or reproduced in any manner whatsoever without the writer’s written permission, except very short excerpts for reviews. The scanning, uploading, and distribution of this book via the Internet or by any other means without the publisher’s/author’s express permission is illegal and punishable by law.

Ten-Gallon Tensions in Texas
is a work of fiction. All names, characters, events and most places are products of the author’s imagination. Any resemblance to actual events or people, living or dead, is entirely coincidental. Some real places may be used fictitiously. The town of Beauford, Texas is fictitious.

The publisher does not have control over and does not assume any responsibility for author or third-party websites and their content.

The Kate on Vacation Novellas
:

An Unsaintly Season in St. Augustine

Cruel Capers on the Caribbean

Echoes, A Story of Suspense

one of my best beta readers

who helps me make my stories better,

and who said one day,

“Why don’t you write a book about a high school reunion?”

An envelope in the recycle bin caught Kate’s eye. Or rather, the Texas return address did. She fished it out.

It was from Beauford High School. She almost tossed it back in the bin. Later, she would wish she had.

She pulled the letter out of the already-opened envelope. It announced the thirtieth-year reunion of the class of 1984. She skimmed down the page. The reunion committee was going whole-hog, with an informal meet-and-greet Friday night, a family picnic on Saturday afternoon, and a formal dance that night.

Her husband walked into the kitchen. She started to hide the letter behind her back, then thought better of it. Holding it out to him, she said, “You don’t want to go to your thirtieth reunion?”

Skip froze in mid-stride. “Why would I want to do that? I hated high school.”

Three months later, Kate mentally revisited that discussion as their plane began its approach into Houston’s airport. Had she pushed too hard for her husband to go to this reunion?

She ran her fingers through her hair, attempting to bring some semblance of order to the unruly dark curls.

High school had not been a good time for Skip. He’d been the “runt of the litter” as he’d described it, bullied unmercifully by the school’s tough guys, until a late growth spurt had taken him from the shortest to the tallest kid in his class in one year.

His newfound height had given him the confidence to start working out, and soon he was also the strongest kid in his class. The bullies who had once picked on him began crossing the street when they saw him coming.

How could Skip be going to his
thirtieth
high school reunion? He’d have been just a few months past his seventeenth birthday when he graduated.

She reached across and tapped the knee that was sticking out into the aisle. Planes never had enough leg room for her husband’s six-five frame.

He pulled ear buds from his ears and leaned forward to give the kids–in the seats next to her–a concerned look. “Everything okay?”

The pink tide turned to red. “I didn’t?”

He gave a slight shake of his head. “It was no big deal.”

She took his hand across the aisle. In a low voice, she said, “No wonder you were picked on.”

He squeezed her hand even as he looked away.

She decided it was best to drop the subject, but her chest swelled with pride. She’d always known her husband was smart.

Holy crap! He skipped a grade!

Skip couldn’t believe he’d never told Kate about skipping a grade. It had been the highlight of his young life–until his family moved to Beauford from Houston the summer he turned eleven. He’d started middle school in the new town that fall, and all the confidence he’d felt as a “smart kid” had been sucked right out of him.

He skimmed straight, brown hair back off his forehead and let out a sigh.

He’d been the shortest, youngest and most socially inept kid in the class, and certain classmates never let him forget how “dumb” he was. He always managed to say the wrong thing.

Looking back on it now, he realized he probably hadn’t been that much worse than the others when it came to social graces. But kids have a pack mentality, and when the alpha male of the pack senses weakness in a newcomer, that newcomer is dead meat.

The plane touched down on the runway with a moderate thump, the sign of a good pilot.

“Middle school is the purgatory of the earth plane,” Skip muttered.

“What’d you say?” Kate yelled over the roar of jet engines straining to slow the airplane.

He shook his head. “Nothing,” he yelled back.

The plane drifted to a stop at the gate. He undid his seatbelt and stood up. One hand reaching for the button to retrieve their carry-ons, he smiled down at his children, who had not yet experienced the curse of middle school.

“Let’s get these little wranglers to their granny’s place,” he drawled, “so she can start spoilin’ them proper like.”

Eight-year-old Edie bounced up and down in her seat so hard her dark curls brushed the bottom of the overhead bin. Her younger brother grinned up at his father, swiping his own straight, brown hair from his forehead in a gesture like Skip’s own. Both children’s blue eyes–inherited from their mother–sparkled with excitement.

The reception at the clapboard rancher in which Skip had grown up was a mixed bag. His mother had enthusiastically passed out kisses and hugs to children and adults. Kate felt herself relaxing as the woman’s warm arms encircled her “favorite daughter-in-law.” The silly joke–Kate was her only daughter-in-law–never ceased to amuse the older woman.

Then Kate had greeted Skip’s sister as Skip shook his brother-in-law’s hand.

Things went downhill from there. Jimmy Bolton’s breath smelled like a brewery as he clumsily gave Kate a hug. She struggled to hide her shock.

He’s drunk, at four-thirty in the afternoon?

“Let me help you with your bags,” Skip’s sister said, the grim line of her mouth belying her lighthearted tone.

Jimmy reached for one of the suitcases and almost fell forward. Suzanne snatched it from under his hand. “That’s okay, honey. I’ve got it. You just sit down and relax.”

Jimmy swayed a bit, seeming to have trouble processing her words. Then he nodded and stumbled over to the sofa. He picked up a beer can from the coffee table and drained it.

Suzanne jerked her head in the direction of the hall to the bedrooms, then headed  that way, hefting the heavy suitcase with no difficulty despite her slender frame. Her lush brunette ponytail bounced up and down as she walked, the only cheerful part of her.

Kate grabbed his shoulder. “You two stay here and keep Granny company, okay?” She’d gotten the hint. Her sister-in-law wanted to talk to them.

Suzanne led them to the bedroom that had once been her own. It had been redecorated as a guest room, with a king-sized bed that was too big for the space.

She plopped the bag on the bed and turned toward them. “It’s that damn Sam Beauford,” she spat out. “He’s tryin’ to ruin Jimmy’s reputation, put him outta business.”

“Sam Beauford is the great grandson of the town’s founder,” Skip explained to Kate, “and he was the leader of the bullies back in high school.”

In other words, your main nemesis.

Skip nodded. The tendency to read her mind was a sometimes endearing, sometimes annoying habit of his.

“Sam and Jimmy own the only two car dealerships in town,” Suzanne said. “And Sam’s bound and determined to narrow that number down to one.”

“Sam would do better to pay attention to his own business,” Skip’s mother said from behind them, her large frame filling the doorway. “The kids are in their room, unpackin’ their toys. You think Edie has enough clothes for that doll of hers?”

Kate smiled at her mother-in-law.

“Sam’s father’s probably doin’ somersaults in his grave,” Suzanne said, “at the way Sam’s drivin’ that business right into the ground. He almost had to declare bankruptcy last year. Then things started goin’ wrong for Jimmy, and now Sam’s got plenty of customers.”

“What kind of things?” Skip asked.

“Rumors that Jimmy ain’t really inspectin’ the used cars he’s certifyin’, that he don’t even bother to change the oil before he resells them.…Crap like that.”

Kate suspected Suzanne would have used a stronger word than
crap
if her mother hadn’t been standing there.

“Then last week, somebody ran screws into the tires of the new cars. Jimmy’s put up a fence, which we cain’t hardly afford.” Suzanne’s Texas accent thickened with emotion. “And he’s fixin’ to get one a them mean dogs to set loose at night.”

Skip shook his head. “People are likely to see that as unfriendly.”

His sister shrugged. “Maybe, but we gotta stop the sabotage. Bobby Joe didn’t discover the damaged tires ’til the mayor picked up his new Lincoln Town Car. He was right in the middle of town when the tires all went flat. And you know how news spreads around here.”

Her mother-in-law chuckled as she tucked a stray gray hair into her bun. “Y’all wash up. I got dinner on the stove. I figured your stomachs would still be on Eastern time.”

Kate gave her a grateful smile. “Yes, and we only had peanuts and pretzels for lunch.”

After their mother had left the room, Suzanne put a hand on Skip’s arm. “Would you talk to Jimmy? Try to get him to ease up on the drinkin’. He’s always respected you.”

Kate’s eyes stung at the desperation in her sister-in-law’s voice.

Skip patted Suzanne’s hand. “I’ll see what I can do.” Over his sister’s head, he made eye contact with Kate.

She gave him a slight shake of her head. She had a bad feeling about all this. A bully like Sam Beauford might not see the fence and guard dog as deterrents, but rather as signs that he was getting to Jimmy. They might egg him on.

Some bullies outgrew the need to tear others down in order to build themselves up. Others did not. The latter made dangerous foes.

Over dinner, Kate surreptitiously studied her in-laws. Skip’s mom seemed to be thoroughly enjoying her grandchildren, asking them about school and their friends. But her hand trembled when she picked up her water glass, and she shot anxious glances at Suzanne and Jimmy whenever she thought no one was looking. Her normally hazel eyes were the muddy brown that her son’s became when he was angry or worried.

Kate figured her mother-in-law had good reason to worry. Jimmy was slumped down in his chair, not even pretending to eat.

The Time of Our Lives by Tom Brokaw
Playland by John Gregory Dunne
Romancing Miss Right by Lizzie Shane
Dinner With a Bad Boy by Kathy Lyons
The Good Girl's Guide to Murder by Susan McBride
Murder in the Rue Ursulines by Greg Herren
Cadaver Dog by Doug Goodman
Slide Job (Cameron Motorsports) by Fox, Sutton
The Billionaire's Housekeeper: A Marriage of Convenience Romance for Adults by Kiana Campbell
The Grenadillo Box: A Novel by Gleeson, Janet
Our partner