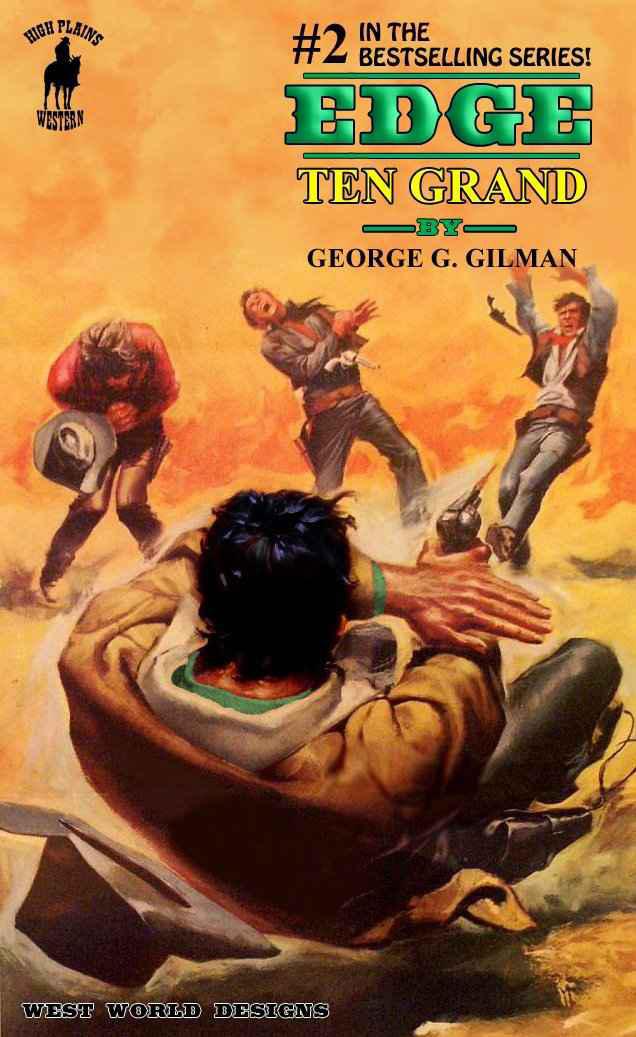 He deals in violence and death.

For him there are no rules, no traditions.

And revenge takes on a whole new meaning

when Edge decides to ride.

This Story is not for the

Names, characters and incidents in this book are fictional, and any resemblance to actual events, locales, organizations, or persons living or dead is purely coincidental.

All rights reserved. No part of this book may be reproduced or transmitted in any form or by any means, electronic or mechanical, including photocopying, recording or by any information or storage and retrieval system, without the written permission of the author, except where permitted by law.

This is a High Plains Western Publication

Visit the author at:

THE man lay in a prone position across the water-smoothed rocks of a dried-up creek bed. He was dressed in a black shirt and black pants, sullied by sweat and the fine dust of southern Arizona Territory. His grey hat, dented at the crown, was a few inches from his outstretched right arm. His gunbelt held a full complement of charged cartridges, but the holster, tied to the thigh with a thong, and the knife sheath at the back were empty. A slight bulge at the back of his neck where the shirt was stretched tight across his shoulders was a tell-tale of another weapon container which has attackers had not discovered.

He was a tall man, deceptively lean at first glance, for he carried a lot of weight which was evenly distributed a great deal of it accounted for by well-developed muscles that made his clothes taut at the upper arms and thighs. Even as he was, unconscious and breathing raggedly, there was about this man an aura of the threat represented by his physical strength.

It was mid-morning of a fine summer day with the golden disc of the sun already high and cruel to everything on the sparse landscape that was not in shade. There was little. sign of movement anywhere. Overhead, ugly black against the solid blue of the sky, three buzzards circled lazily, watching and waiting. To the south, just discernible through the water mirage of the heat, a cloud of dust marking the fast progress of a large group of riders. In the creek bed, the almost imperceptible rise and fall of the man’s breathing. And, slithering across the trail that followed the course of the arid creek, a seven-foot long diamond-back rattler.

The man’s first sign of returning awareness was a low groan to interrupt his regular breathing. Then a long-drawn out sigh, a convulsive jerk of his right leg from a cramp and he rolled over on to his back. He opened his eyes and snapped them shut again as strong sunlight stabbed into them. He lay still for several moments, lengthening his breathing rate, his face contorted in his fight against pain. It was a long, lean face with high cheekbones and a firm jaw line. The mouth was thin-lipped, the eyes narrow with hooded lids. The skin, where it was visible above the stubble of a days’ old beard, was sun-baked to the color and texture of well-tanned leather. The brow was made low by the fringe of straight black hair, which was worn long at the back and sides. It was the face of a man who seldom smiled: a face that some women found brutally attractive, others saw as ugly and men recognized as dangerous—the face of a cold-blooded killer.

The cause of the pain it showed was a large swelling beside the right eye, the skin discolored to an ugly blue and black, split at the center of the bruise so that blood had run, streaking the cheek and clotting to black among the stubble of the jaw. But the man was no stranger to pain and it took him only a few seconds to adjust from the emptiness of the unconscious to a state of awareness to his surroundings: a realization that for the immediate future his mind would have to function against the pulsing throb of agony that engulfed the right side of his face.

He opened his eyes again, mere slits of light blue, the result of having a Scandinavian mother while almost everything else in the man’s make-up was drawn from the pure blood Mexican heritage of his father. As he looked directly above, his lips drew back to show two rows of even white teeth in a cruel grin: high overhead the buzzards made a final circuit and wheeled away, screeching their frustrating rage.

“Stick with me fellers,” he said softly after the departing scavengers. “I’m as hungry for blood as you are.”

Then the grin was gone and if the buzzards had not lost interest they may have considered their wait worthwhile. For the man was at once unmoving to the extent that he suddenly filled his lungs with air and held it, his chest expanding and the veins of his neck standing out with the effort. The slithering sound of the snake’s length as it hauled itself down into the creek bed and the periodic rattle from its swaying tail were magnified by the silence.

Still William by Richmal Crompton
God Save the Queen by Amanda Dacyczyn
Betrayed by Alexia Stark
Doctor Mirabilis by James Blish
The Shoestring Club by Webb, Sarah
Close to the Bone by Stuart MacBride
How to Seduce a Billionaire by Portia Da Costa
Highland Protector (MacCoinnich Time Travels Book Five) by Bybee, Catherine
Blood at the Root by Peter Robinson
Blonde by Joyce Carol Oates
Our partner