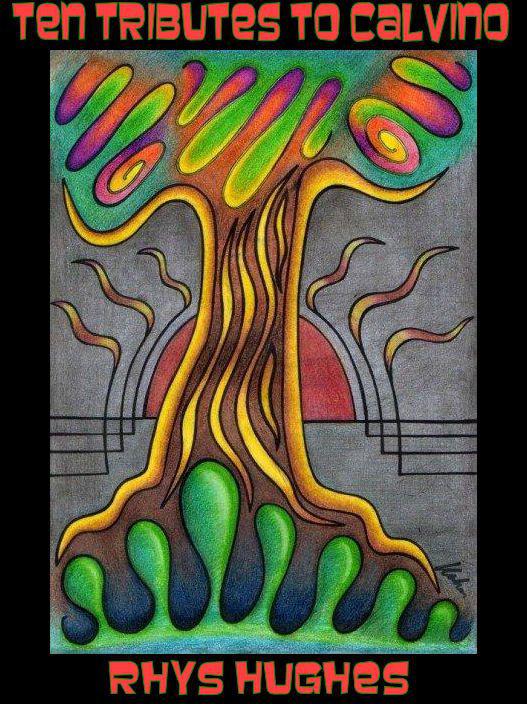 All rights reserved. This book and any portion thereof may not be reproduced or used in any manner whatsoever without the express written permission of the publisher except for the use of brief quotations in a book review.

This ebook is dedicated to

Who is the artist responsible for the cover.

Climbing the Tallest Tree in the World

The Planet of Perfect Happiness

The City That Was Itself

The Non-Existent Viscount in the Trees

The Parable of the Homeless Fable

I make no secret of the fact that Italo Calvino (1923-1985) is my favourite writer; ever since I first picked up a copy of
The Castle of Crossed Destinies
three decades ago I have been fascinated and intrigued by his work. Although rigorously intellectual, his fiction also demonstrates a vast capacity for feeling. He’s simultaneously a head and heart writer. This modest ebook collects together ten tales written over the years that were directly inspired by Calvino. I won’t claim to have a fraction of his originality and talent, that would be presumptuous in the extreme, but certainly he has been my biggest literary influence; and the following pieces are more in the nature of a “thank you” than an attempt to emulate his genius.

I was standing on the corner of two cobbled streets looking for my wife. First I looked down one street and then up the other. But she did not come into view. So I stopped one of the hurrying pedestrians and said, “Excuse me, but would you mind waiting here in my place?”

“Why should I?” he answered gruffly.

“Quite simple. By standing on this corner I am able to survey two streets at once. But I would like to take a look at a third, which is why I propose walking to the end of this street and standing on that other corner.”

“What are we looking for?”

“My wife. You will recognise her when you see her. She is too beautiful for me. Remember that and call out the moment she appears.”

And so I left him on the corner, looking down one street and up the other, while I walked to the end of the first street and stood on the corner. Now I was able to look up that street, instead of down it, but also down a new street, previously unknown. I alternated my gaze between the two streets, as did my helper on his corner, but at a different rate, so that our eyes meshed only on every seventeenth oscillation.

My wife still did not come. Had she gone shopping or for a meal? Perhaps she was having her hair trimmed or her nails filed? Maybe she had run off with another man, through the park, under the trees, hand in hand, into the bushes, out of their clothes. I was close to despair.

I stopped another pedestrian. “Please help me find my wife!”

“Stand here and watch out for her. She is too beautiful for me. I must walk to the end of this street and take up a position on the next corner. That will increase our chances of actually sighting her.”

“But this is a junction and there are three streets leading off from it.”

I had not noticed the fact. There was no way I could walk to the end of two streets simultaneously, so I rocked gently on my heels, clutching my head, unsure. Finally a voice tripped through the curtain of my lank hair into my ear. It was the first pedestrian, asking, not politely, if I was unwell.

“You have abandoned your position!” cried I.

“Not as such. I perceived that you were in distress and came over to see what the matter was. But I stopped a different pedestrian and persuaded him to take my place. There he is, watching from the original corner.”

This was true. He waved at me and I waved back. There were now three people willing to help me find my wife. This was good, neat, convenient. The chances of glimpsing her lithe form, her charm woven into flesh, were increasing. And my lungs were voluminous enough to thank more than one collaborator in my quest. There was no need to refuse any offers, however reluctantly implemented.

“You made the correct decision,” I agreed. “Perhaps if you wait here, while this other fellow walks down this street to the next corner, and I walk up this one, we shall spy her very soon.”

“It is not beyond the bounds of feasibility.”

The first pedestrian took up his position while the second and myself reached our respective corners. The system of oscillating glances was now more complex. The success of the unseen pedestrian, on the original corner, was relayed to me by my first assistant, the one concerned for my health, from his new vantage. No, not success, for she did not appear, nor her excessive beauty.

I watched in vain. At last I stopped another pedestrian.

“Have you seen her? Have you?”

“I have not, whoever she might be. Do you wish me to stand here and take your place while you proceed to the end of the street and stand at a different corner? I shall do so, but not eagerly. Besides, this is not a simple corner, nor even a junction, but a crossroads. There are four streets meeting here.”

“You are right! I deem this fact a major setback.”

“Not so. Here are two fellows coming to see what the matter is. Together we make four. Maybe they will help you occupy all the new corners.”

The first and second pedestrians reached my side and demonstrated concern at my agitation, which they had noted. But I was happier now, particularly when they both announced how they had managed to find replacements for their earlier positions, selected at random from other pedestrians, and were free to walk to the ends of two of the streets leading from the crossroads, while I took the third. My remaining assistant would stand here and keep in contact not only with us but also with the three replacements, the first of which still occupied the original corner.

The web of glances was now truly tangled, elegant, deadly. Soon my wife would be spotted for sure. But she is obviously more clever and slippery than I had ever anticipated. Her beauty did not manifest itself.

My new corner was colder than the others. A breeze dried my gums. How might I kiss her ankles with such oral aridity? Then I perceived that there was less cover from the elements in this location. No fewer than five streets met at this point. The spines, or bones, of a pentagon. Pedestrians rushed down them all, but not my wife. She who is too beautiful to describe did not flow.

I stopped another pedestrian to take my place. My three earlier assistants came up to help me. Together we were five in number, enough to occupy the new corners which would reveal themselves. We diverged again.

“Remember to shout out when you see her!”

The next corner I reached was a focus for six streets. Another willing pedestrian; a further adjustment of assistants. I was collecting disciples, eyes, all infected with my despair, my romanticism. The corner after that fused seven streets. Then eight, nine, ten. The temperature was falling, the wind was rising. Where was she? Sheltering in a doorway? More corners, more converging streets. Eleven, a dozen.

By late afternoon, I had lost count. I stood in a circus, a hub, with streets radiating like the spokes of a unicycle wheel. Too many. Down none of them stalked my wife. I turned up the collar of my coat. At the far end of one street I noticed a man standing on a corner. He was steady, watching. I walked up to him. Before I could open my mouth, he cried:

Then I understood that the circuit had been closed. This was my original corner, occupied by my last replacement. I turned and saw that all the buildings had vanished. The city was naked. The city walls still stood, bounding an immense square, but the space they contained was empty of artificial structures. People were milling without the guidance of streets. Rather, so many streets met at this point that everything was an absence. My view of the totality was unimpeded. No more corners to hide behind. Still my wife was not apparent.

It was an illusion, of course. The combined effect of watchers on every corner, relaying their observations with a glance, the whole in harmony, had made me our first omniscient citizen. I saw the utter limits of my disappointment. No nook, no cranny, remained. And if there was still no beauty to be found, it simply did not exist. I lacked uncertainty, hope.

I tapped him on the shoulder. “Go home!”

He shrugged and went. The circuit was broken. A few, a very few, buildings shimmered back into reality. The horizons were eroded.

“Tell the others to go home as well. Spread the word!”

I closed my eyes and waited. When I opened them, it was evening and I was back on my original corner. It was warm. I pressed through the crowds to my apartment at the top of a narrow, tall house. This city is convoluted, riddled. And I dwell high, but not high enough to behold more than a few strands of the tangle. I climbed the steps, opened my door. The candles had burned to stubs.

Throwing off my coat, I sat on the edge of the bed. Already I was forgetting about my wife. The loss of beauty that is beyond imagination cannot be regretted too much. Next year I shall try again. Perhaps when I am married, when I am no longer a bachelor, it will be an easier task to lose and find her.

Climbing the Tallest Tree in the World

It started as a prank and ended as a plank. We drank too much ale and tumbled out of the tavern. Our university is the most renowned in the land. Somebody suggested that we accomplish a feat never before attempted. We agreed with alacrity. We disagreed with Figgis, who wanted to go home. We knocked him down with stones. We had a tradition of appalling behaviour to live up to. It was our duty.

To be honest, I can’t remember if we were students or professors. It hardly matters. I pointed at the famous tree in the main public square and cried: “Let’s climb that!” The excited voices around me went quiet. But it was too late to back down. Slowly a chant filled those empty throats. “To the top!” We bolstered our courage with coordinated hubbub. I was happy and scared.

We decided to mount our assault in pairs. We reached the base of the trunk but did not bother to look up. It was pointless. The canopy was lost beyond the clouds. Fresh hearts and initials had been carved into the bark. I went first with Gruber. As we ascended, the style of these carvings became cruder and older. They had all been made at ground level and the growth of the tree was carrying them toward heaven.

The Eyes of the Overworld by Jack Vance
Holiday Hideout by Lynette Eason
How Hitler Could Have Won World War II by Bevin Alexander
The Secrets of Attraction by Constantine,Robin
Alpha Alpha Gamma by Nancy Springer
Dying on the Vine by Peter King
Teaching the Biker (Bad Boy Romance) by Kelly Lawson
Chronicles of Jonathan Tibbs 1: The Never Hero by T. Ellery Hodges
The Invisible Handcuffs of Capitalism: How Market Tyranny Stifles the Economy by Stunting Workers by Perelman, Michael
Negative Calorie Diet Cookbook: 50 Top Rated Negative Calorie Meals-Natural Fat Burning Advantage To Help In Natural Weight Loss by Amelia Sanders
Our partner