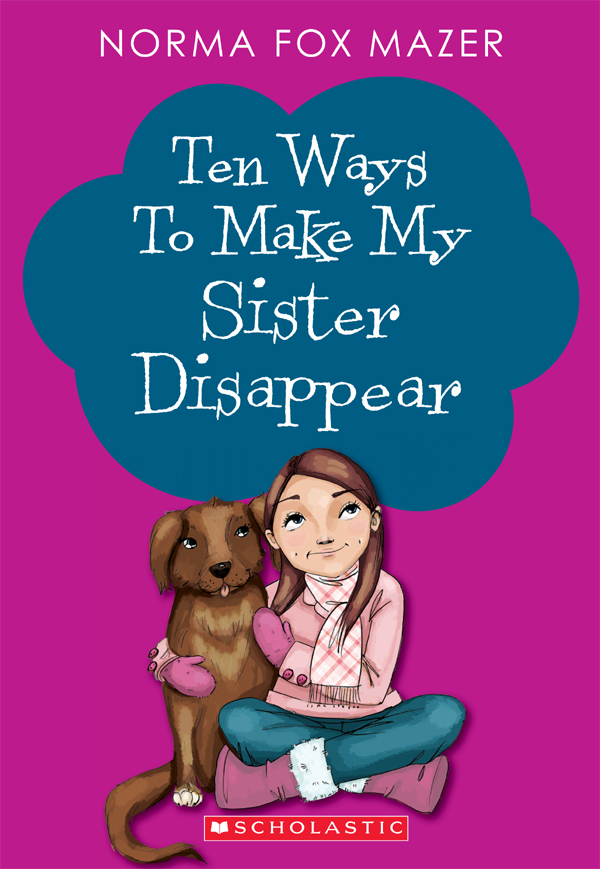 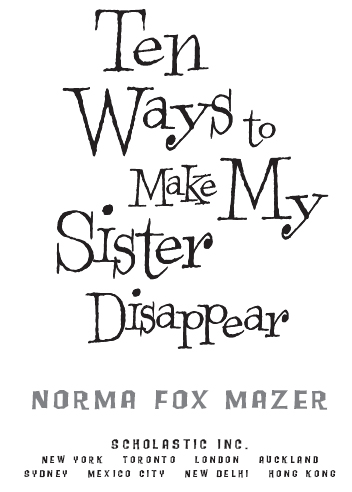 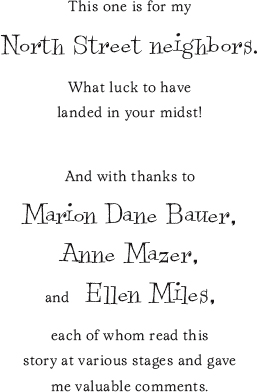 5
Orange Chalk and a Giant Mosquito

6
The Cutest Boy on the Moon

11
The Appearance of Thomas Buckthorn

20
How the Wall Came Down

T
EN
has always been Sprig's lucky number, and this is her tenth year, the best year ever. Being ten is
great
, so much better than nine. She absolutely feels older and more mature, and she's already looking forward to her next birthday, when she will be ten plus one or, as some people insist on calling it, eleven.

Sitting next to her older sister, Dakota, in the back of their car on the way to the airport on Sunday, January 10, Sprig checks her watch. 4:20
P.M
. She was born on the tenth day of the tenth month at 4:10
P.M
. At this very moment, she is exactly ten years plus three months plus ten minutes. “Mom!” She leans forward and taps her mother on the shoulder to give her this news.

Her mother glances into the rearview mirror. “What is it, sweetie?”

“Mom's driving. Stop distracting her,” Dakota hisses into Sprig's ear. “Do you hear me? Answer, please.”

“I hear you, I hear you,” Sprig says. Dakota used to be so much nicer. It seems like a million years ago, but they used to play together, giggle about things, even sleep together, but when Dakota turned twelve in August?
Boom
, just like that, like something fell out of the sky and hit her on the head, she also turned bossy and know-it-all.

“I know,” her mother answers. “It's a little late, but we'll get your father to the airport in time.”

Her mother is not getting the significance of the moment. Anyway, now it's 4:21, the moment has passed, just like the whole day. Instead of lingering, as Sprig wanted it to, as so many days do, today has whirled by like the white, snowy world outside the car window. Just
whirled
by!

Maybe this is what Mom meant when Sprig overheard her yesterday, saying to Dad, “Darn it, Larry, everything in life goes by too fast.”

Too fast? No way! Aside from today, Sprig definitely does not agree with that. It takes
ages
for time to pass, especially when you're waiting for something, the way she's going to be waiting for Dad to return from his trip. She's already waiting for him to return, and he hasn't even left. The time ahead of her when he'll be away looms like doom. Like eternity. Like
forever
.

“âDads?'” Dakota says, behind her. “Excuse me, I don't think that's in the English language.”

Sprig decides to maturely ignore her sister. She ruffles her father's hair and says, “Hello. I want to ask you something.”

Grace
is her real, proper name, it's right there on her birth certificate, but ever since Dad saw her for the first time (he was away when she was born) and called her “a little sprig of freshness,” it's been either Sprig or Baby. He really should stop calling her that, even though she likes it when he does, maybe even
loves
it.

Dakota taps Sprig on the behind. “Hey. Now you're distracting Dad. He's got important things to think about.
Baby,
” she adds.

“I'll take that whine with cheese.”

“Thank you,” Dakota says, flipping her hair behind her ears. “I thought so.” Dakota has beautiful red hair, she's an A student, and last year in sixth grade, her classmates voted her Easiest to Get Along With. Last year, Sprig agreed. This year?
Not.

“Today, of all days,” Dakota goes on lecturing, “when Dad is going away, and the parents are stressed, you'd think you could control yourself.”

“Quiet, you ugly beast.” The words spring out of Sprig's mouth. She bites back a smile. She
loves
what she just said. It's not very often that she gets off a zinger that leaves her perfect sister speechless.

“Dads?” She leans farther over his seat until her cheek rests against his. “Do you have to be gone for six whole weeks?” Maybe this time a miracle will occur, and the answer will be the one she wants.
Baby, I wouldn't stay away from my favorite daughter that long! I'll be back next week
.

She smooths his hair. He's so handsome â even if he is a little bit out of shape â and so smart that if he wanted to be President, he could just go for it. And how about his voice! It's great, really deep and, well, just
great
. He could be a pop singer. Or a songwriter. A long time ago, he made up this really funny song that he would sing to her.
I've got a little girl, she's kinda giggly, likes to twirl. Oh, yeah, yeah, yeah. I've got a little daughter, she's kinda skinny, could be fatter. Oh, yeah, yeah, yeah.
Of course, you have to say “datter,” not daughter, to make it rhyme, but still, Sprig is sure he could be a great singer slash songwriter. Songwriters probably get to stay home most of the time.

Dad says he doesn't like traveling, but the thing is, he doesn't want to be anything but what he is, an architect slash engineer, a specialist in public buildings. About a dozen times a year, he's called away to consult with this company or that company, with this town or that city. Sometimes it's only for a day or two, but not this trip. He's going to Washington, D.C., to consult with some important government person â someone they call an undersecretary, which is a really weird title; it makes Sprig think of somebody crouching under a table. They're going to talk about building schools in Afghanistan. They might even decide to send Dad all the way over there. To where those awful people, the Taliban, went around shooting men who shaved and whipping women who tried to go to work. They wouldn't even let girls go to school!

He's studying a bunch of papers spread out on his briefcase. “Hmm, maybe.”

Sprig can tell he didn't really hear her. She speaks urgently to capture his attention. “Will you try? I don't see why a conference has to be so long. It seems stupid, Dad. And why â”

“Sprig, please,” her mother says, peering out the window. “Can you keep it under wraps until â oh, darn! Larry, did I miss the turn? We're already running late.”

“Easy, Lucie, it's the next one,” her father says. He's always calm.

Dakota leans across the seat and prods Sprig in the arm. “See what you did with all your chatter? You made Mom almost miss the turn.”

“Darling, I just touched you.”

“I repeat,” Dakota says, “I only touched you. And another thing, every time Dad goes away, you ask him the exact same questions.”

“I don't, Dakota. I don't do that,” Sprig says. Wondering if she does.

“The exact same questions,” Dakota drones in her I-am-your-master voice. “You repeat yourself. Do you realize that's boring to people? Really
boring
.”

“Mom,” Sprig begins, but then, looking at her mother's hands clamped on the steering wheel and the way she's hunching her shoulders, Sprig closes her mouth and stares out the window, thinking how great and wonderful and amazing and perfect and just plain
good
her life would be, if only two little â well, two big â things changed.

If only Dad didn't go away,
ever
.

And if only Dakota did,
forever.

Say Dakota changes places with Dad. He stays home and she flies away. Say the plane flies to the Antarctic. Sprig can see it all: the plane landing, Dakota stepping out onto an ice floe, the beautiful white world, the amazing blue sky, and then â¦ the wind â¦ and Dakota floating gently, gently, oh so gently
away
â¦.

W
HILE
Dad waits in line to use the machine to get his boarding pass, Mom stays with him. They are holding hands.

“Mom's sad that Dad is going away,” Dakota says.

“Me too,” Sprig says. The girls are standing on the other side of the rope. “Me and Mom are sad.”

“I was correcting your grammar,” Dakota says. “âMe and Mom' is illiterate.”

“And just because I don't make a big deal and cry boo-hoo-hoo, like some people, I won't mention names, doesn't mean I'm not sad about Dad. Anyway, I just wish he was staying home.”

“I hate it when he goes away,” Sprig says.

“Well, you can't do anything about it, so don't mope around. Are you going to say goodbye to him cheerfully?”

Sprig has already given herself a talking-to about crying â that is, about
not
crying â and she is resolved that not one tear is going to fall. And if she feels them coming, well, she has an emergency plan. She'll count to ten â silently, of course â and imagine each number as a different person. One, a skinny girl on a diet â¦ two, a girl kneeling â¦ three, a girl with sideways boobs â¦ et cetera. By the time she gets to ten, skinny and her fat friend, she should be safely dry-eyed.

Good plan,
she congratulates herself. She has always cried, as Mom says, at the drop of a hat. Mom used to hug her when it happened, but after her birthday two months ago, Mom and Sprig had a little talk. “Maybe, sweetie, you could work on not crying so much?” Mom said, and Sprig promised to try. End of talk.

She has been definitely trying, but it's hard not to cry when things happen, like failing your swimming test at the Y and, on the same day, your spelling test in school. And how can you not cry when you find a little yellow dog dead in the road, right across from your house? That afternoon, Sprig had run into the road and picked up the limp body, even though Dakota was yelling, “Stop, don't do that. Cars are coming! You're going to be roadkill!”

It was Dakota, though, who found the dog's name, Oscar, on his tags and who called the number and talked to the man who came to claim him. When the man saw Oscar lying stiff and cold on their steps, he picked up the dog and cradled him. “Oscar, my friend, I'm going to miss you.” That's when Sprig started really crying.

Just remembering all this now, in the airport, makes her choke up.

“No.” Sprig gulps and swipes her eyes with her sleeve.

“That's better,” Dakota says. “Keep that crying thing under control. Mom and I know it's just your way of getting attention.”

Sprig grabs her sister's arm.
That crying thing.
As if she turns it on and off, like a faucet. As if she does it for a reason. For
attention.
“Take that back!” she says.

“Pleeease,” Dakota says with exaggerated courtesy. “You're being violent.” She unpeels Sprig's fingers and straightens her jacket.

“Girls,” Mom calls. Dad is finally done at the ticket machine, and he and Mom are walking toward the escalator.

Dakota grabs Sprig's hand, and they rush after their parents. As they jump onto the escalator, Dakota, who's wearing new boots with thick heels, stumbles and almost falls. Sprig latches onto her arm again and steadies her. “Saved you!” she says. “Are you grateful?”

When they get to the security gate, their parents are waiting for them. Or are they? Do they even see that Dakota and Sprig are here? Mom and Dad have their arms around each other, and they're kissing. People are walking by them, and they don't even notice, they just keep kissing.

“Kill me now,” Dakota says. “They're smooching like teenagers.”

The sisters look at each other, and they can't help laughing.