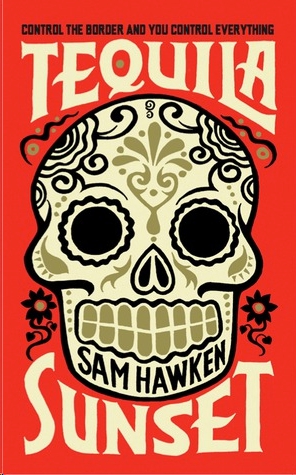 S
AM
H
AWKEN
is a writer of contemporary crime novels and other fiction, who makes his home near Washington, DC with his wife and son. Current events in Mexico are his preoccupation, and
Tequila Sunset
is his second novel set in the Ciudad Juárez/ El Paso area.

Praise for
The Dead Women of Juárez

“Unusual and convincing”
The Times

The right of Sam Hawken to be identified as the author of this work has been asserted by him in accordance with the Copyright, Designs and Patents Act 1988

The characters and events in this book are fictitious. Any similarity to real persons, dead or alive, is coincidental and not intended by the author.

All rights reserved. No part of this book may be reproduced, stored in a retrieval system or transmitted in any form or by any means, electronic, mechanical, photocopying, recording or otherwise, without the prior permission of the publisher.

First published in 2012 by Serpent’s Tail,

an imprint of Profile Books Ltd

Designed and typeset by [email protected]

For those who fight the good fight

The city of El Paso, Texas is the safest city in the United States.
Across the border, in Mexico, Ciudad Juárez is one of the most
violent cities in the world, with over 7,500 killed since 2006.

I
N THE SUMMER IT WAS HOT, IN THE WINTER
it was cold and all year round the halls and cells of Coffield Unit were busy with the business of incarceration. This day it was not so bad, teetering between two extremes. The ceiling-mounted fans did not turn and the big heating units that blew and blew, but did little to chase away the chill, were silent.

Flip lined up with the convicts, dressed in their white cotton uniforms, waiting for the COs to open the door and let them out onto the yard. Barred windows let in sunshine to compete with sallow fluorescents. It would be good to be outside.

When the door opened the COs counted them off. Already they had been counted before getting into line and they would be counted again when it was time to go back inside. Counting was a constant and if ever the numbers didn’t jibe everything stopped.

They went out mixed, but as the cons distributed into the yard they broke into their component parts. White boys congregated by the weight pile, blacks by the half-court basketball blacktop and the Latinos by the handball court. Within each division were individual cliques, but the most important grouping was by race. The colors approached one another’s domains only when certain dictates had been observed. In this way the facilities could be shared without it coming to blows.

Flip was not the youngest Latino on the yard. That honor went to Rafael Perez, eighteen years old, doing four for sexual assault on
a child. He was shunned, and when anyone took notice of him it was bad news. The other Latinos didn’t even let him find a corner to hide in; he was forced to stand away from the walls in the no man’s land between handball and basketball courts, exposed to everyone. He seemed smaller now than when he came.

Today Flip stood with Javier who was doing thirty-five and Omar who wasn’t ever getting out. Both men were old enough to be his father. They kept close and they let no one touch him, not on the yard or on the inside, because he was one of them. Flip was an Azteca. They called each other Indians.

Javier was tattooed from his navel to his collarbone and on his arms, too. The marks showed on his wrists where his cuffs pulled back. He had his initials over his left eyebrow. Many of his pieces he had done on himself. He did good work. Flip hadn’t ever gotten anything from Javier, though Javier offered more than once. None of Javier’s marks were a gang patch and he didn’t do gang patches. They were Aztecas, but no one could prove it. That’s how they all stayed out of Administrative Segregation, where gang members went and never surfaced again.

If anyone asked, they were all just good friends. Old-timers watched out for new fish and new fish did favors for the old-timers. There was nothing the COs could say about that. No Indian would give up another Indian. From time to time one of them would be picked off, sent to Ad Seg, but that was just bad luck.

In all there were two hundred and fifty men out of four thousand in Coffield on the yard. They were watched on the ground and from the towers. Double rows of thirty-foot cyclone fencing and yards and yards of densely coiled razor wire stood between them and a tall concrete wall. There were flatlands beyond. It was two hundred yards from the wall to the first tree and the COs in the tower were excellent shots.

Enrique Garcia was one of the last out. He’d been in the hole for sixty days and now he was free of the belly chain and ankle cuffs.
His size was intimidating though his waist was thick. The COs were careful watching him when he came on the yard because there was trouble before and there could be trouble again. In the time Flip had known him, Enrique spent more days in the hole than out.

The sun reflected off his bald head. When he came close to the others he smiled from under a mustache that made him look like a bandito. He rapped knuckles with Javier and Omar and Rafael and César and all the other Aztecas. And Flip, too. His fingers were tattooed. Under his shirt he had ink of an Aztec warrior in full headdress and a bare-breasted maiden beside him. Flip had seen it once. A scorpion crawled up his neck. That one didn’t stand for anything.

“Not much longer, right?”

“A week? So soon.” Enrique looked up at the sky and let the rays of the sun fall on his face. He breathed in the cool air like he was thirsty for it. Flip had never been in the hole, but he could understand.

A group of convicts took over the handball court and broke out in pairs. They did not mix with the Aztecas because they were La Eme. There was longtime peace between their cliques because Enrique had brokered it. Flip stepped off the corner of the court to give them all the space they needed. Before long they were playing, the echoes of the ball bouncing around their corner of the yard.

“He got out of the infirmary, took protective custody,” Javier said. “Ain’t nobody seen him since.”

Flip looked across the open ground to the basketball court where the blacks held together. They were watching Enrique and talking among themselves. There was no peace between the Aztecas and them. There could be no peace. They had Danbury to answer for and Danbury to avenge and there was no easy way to work that through. Flip was glad he would be out of it soon.

“Flip,” Enrique said and his put his hand on Flip’s shoulder. “The first thing I did when I got out, I made some calls for you. When you get home, you’re gonna be looked after. Everybody will know your name.”

“It’s nothing. Blood don’t stop at the gates. José, he’s my boy, he’ll watch over you like I would. You got no worries.”

The blacks weren’t looking their way anymore. Some of them shot hoops.

“N
UMBER TEN!
” THE
CO
CALLED.
F
LIP GOT
out of his bunk. He had the top, Daniel the bottom. When Flip was gone, arrangements would change. Flip’s things were in a white cloth bag with a string tie.

The CO stopped at the cell door. He was one of the new ones and Flip didn’t know his name. “Number ten, open up!” he yelled down the line and somewhere a buzzer went off. The CO put his key in the lock, turned and pulled. “Step out.”

Outside the row of cells there was a yellow line painted on the concrete. Flip grabbed his bag and walked over the line, stood facing the wall while the cell was locked up again. When he felt the CO’s touch on his elbow, he turned and marched, the CO at his back.

The convicts in their cells called out to him.
See you, man. Hasta la vista. Good luck, hermano
. Flip raised his hand to them until they came to the end of the line.

“One prisoner coming out,” the CO said.

Danny Mascorro worked the gate. He buzzed the lock and the CO used his key to get them through. Now they were in a dead zone between gates, Mascorro behind reinforced glass. They were
under the eye of closed-circuit cameras. Flip nodded to Mascorro and Mascorro nodded back.

After the second gate they proceeded down a long hall with no windows. At the end was a steel door. A CO peered through a slot at them and there were more buzzers and more locks.

They left Flip in a big cell with benches along three walls. He was in there for a long time, until finally another CO he didn’t recognize came to get him. The CO took him down a passageway to another, smaller cell adjoining a large room with desks and computers. Women in TDCJ uniforms were at work there, clicking away on keyboards, and they ignored him. Flip sat down and waited.

There was a window in the room beyond his cell and through that window he could see a tree. He didn’t know if he was looking at something beyond the walls or if there was a garden spot just past the glass. In his imagination it was a yard with concrete benches and flower beds and a flagpole flying the American and Texas banners. Maybe there was a little plaque dedicating the space to somebody or the other. Quiet and peaceful.

He was daydreaming when one of the women called his name. “Huh?” he said.