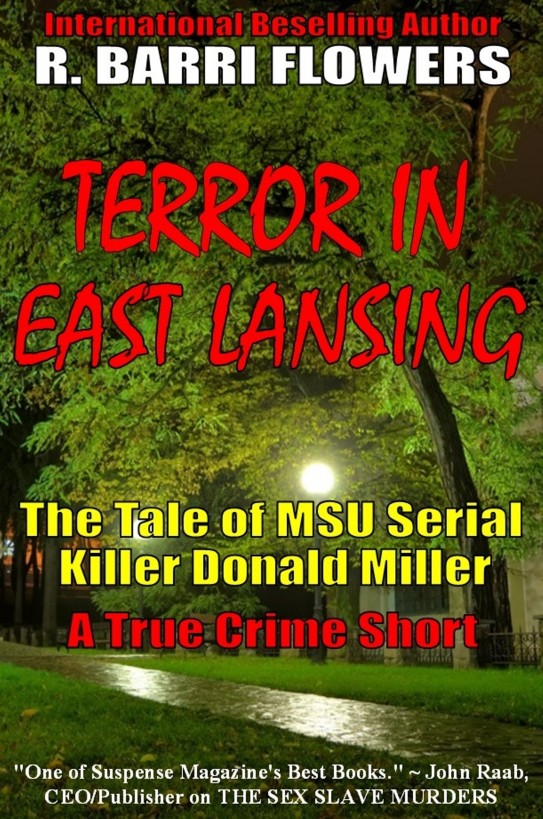 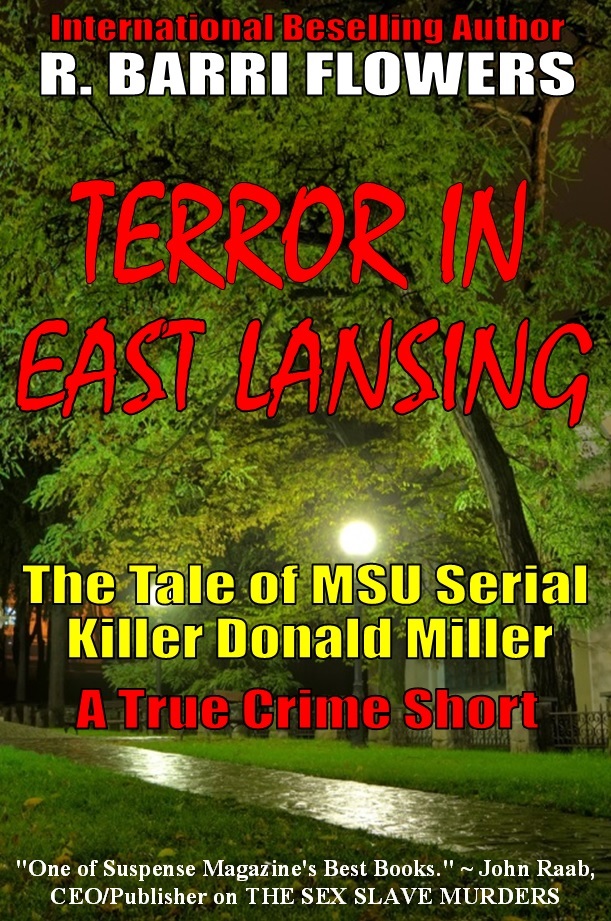 Copyright 2014 by R. Barri Flowers at
Smashwords. All rights reserved.

Used under license from Shutterstock.com

In memory of the victims of Donald Miller and
their lost potential.

And to Michigan State University's
distinguished School of Criminal Justice that gave me my start as
an ambitious student and award-winning criminologist, turned
bestselling crime writer.

The Dynamics of Murder: Kill or Be Killed

Masters of True Crime: Chilling Stories of
Murder and the Macabre (editor)

Murders in the United
States:
Crimes, Killers, and Victims of the
20th Century

Prostitution in the Digital Age: Selling Sex
from the Suite to the Street

Dead at the Saddleworth Moor: The Crimes of
Ian Brady & Myra Hindley

Mass Murder in the Sky: The Bombing of Flight
629

Murder at the Pencil Factory: The Killing of
Mary Phagan 100 Years Later

Murder of a Star Quarterback: The Tragic Tale
of Steve McNair & Sahel Kazemi

Murder of the Banker's Daughter: The Killing
of Marion Parker

"R. Barri Flowers always relates an
engrossing story." — Robert Scott, author of The Last Time We Saw
Her on THE SEX SLAVE MURDERS

"A model of exposition not to be missed by
anyone interested in the annals of American criminal behavior." —
Jim Ingraham, Ph.D., professor emeritus of American Studies at
Bryant University on THE PICKAXE KILLERS

"Exhaustively researched, each storyteller
brings their own unique prose to these pages, creating what will
soon become a true crime classic." — Kevin M. Sullivan, author of
The Bundy Murders on MASTERS OF TRUE CRIME

"This book should be a mandatory purchase and
read for any true-crime buff." — Steven A. Egger, Ph.D., associate
professor on MASTERS OF TRUE CRIME

"An indispensable sourcebook for anyone
interested in American homicide, from law-enforcement professionals
to armchair criminologists." — Harold Schechter, author of The
Serial Killer Files on THE DYNAMICS OF MURDER

In the latter part of the 1970s, Michigan's
Big Ten school Michigan State University (MSU) in East Lansing was
the place to be for higher education, athletics, sexual
experimentation, keggers, smoking pot, and expressing oneself. The
school had a well-deserved reputation for partying. And MSU in the
1970s also turned out to be the place and time for a brutal serial
killer to emerge, one who would take aim at young women, sexually
assaulting them before violently ending their lives.

Donald Miller was not just another serial
killer. The twenty-four-year-old graduate of MSU's renowned School
of Criminal Justice once seemed to be on track for a totally
different connection with the criminal justice system. But at some
point, destiny took a deadly turn, and Miller achieved the
distinction of becoming East Lansing's and MSU's only known serial
killer—a distinction the community would prefer to forget. But
Miller left a mark that seemingly makes such a thing impossible in
the halls of academia and the surrounding area.

Michigan State University's School of
Criminal Justice, founded in 1935, is the country's oldest
continuous program for granting degrees in criminal justice.
Originally known as the School of Public Administration and Public
Safety, it followed the "land-grant philosophy" established by
Michigan State Agricultural College. This philosophy is derived
from the Morrill Act, signed in 1862 by President Abraham Lincoln
to provide a generous "grant of land to each state, the revenue of
which was to be used for the development and support of agriculture
schools."

Within this context, the land-grant
institution became the first college in the nation to offer a
bachelor of science degree in police administration, the intent
being to use scientific education and training to properly prepare
students for careers in law enforcement, private investigation, and
in other areas of criminal justice.

By 1977, MSU's School of Criminal Justice had
presented undergraduate and graduate degrees to thousands of
students under the direction and tutelage of such criminal justice
and criminology legends as Donald Bremer, Arthur Brandstatter,
Ralph Turner, Robert Scott, Louis Radelet, Zolton Ferency, Leon
Weaver, Vincent Hoffman, and Robert Trojanowicz, among others.

Donald Miller was among those graduates to
receive a degree in criminal justice from Michigan State. But
rather than use it to pursue a career in law enforcement,
government, or perhaps teaching, he took a decidedly different and
dark path, turning into a psychopath, rapist, and serial
killer.

Born on December 28, 1954, Donald Gene Miller
was described as the "quintessential boy-next-door." Having grown
up in a peaceful, middle-class area in the college town of East
Lansing, Michigan during the rebellious 1970s, it would have been
quite easy for him to have gotten caught up in the type of crowd
among which long hair, drug use, and sowing one's oats was fairly
common. Instead, by all accounts, Miller walked the straight and
narrow, respected his elders, kept his hair short, and was a youth
minister at the local church. He attended Michigan State
University, majoring in criminal justice. It seemed like he was
well on his way toward finding a successful career in law
enforcement or some other impressive occupation within the world of
law and order.

Adding to this picture of apparent
perfection, Miller had started dating a girl from his church,
Martha Sue Young, who lived down the street and was friends with
Miller's older sister. By the winter of 1976, Miller, twenty-one,
and nineteen-year-old Young, who also attended Michigan State, were
engaged. The couple seemed to be headed toward matrimony and a good
life as two bright students in love with life and each other.

But that all changed rather abruptly. Just
before New Year's Eve 1976, Young called off the engagement.
According to her mother, Sue Young, there were a number of reasons
her daughter did not go through with the marriage, such as "the
fact that Don was twenty[-two] years old and never had a job,"
apart from a brief stint working in a resort community the previous
summer.

The two also differed in their attitudes
about education. Whereas Young loved college and was serious about
studying and getting good grades, Miller felt just the opposite.
"Don never studies, and his grades aren't good," Martha told her
mother. Sue Young noted that her daughter enjoyed athletics and
socializing in college but complained that "it's not only that
[Don] doesn't, but he doesn't want me to either."

Whatever the reasons, or combination thereof,
for breaking off their engagement, an embittered Miller had no
intention of fading into the woodwork as Young sought greener
pastures. Miller was able to convince her that they should remain
friends at the very least, insisting that she keep the engagement
ring, with no strings attached, with regard to the promise of
future romance.

Young, who may have been wary of such an
offer, chose to give her ex-fiancé the benefit of the doubt and
maintain the friendship. Based on Miller's clean record with the
law, on their being members of the same church, and on the strong
camaraderie between their families, it seemed there was no harm in
giving Miller at least this much.

But Young could not read Miller's devious
mind. Nor did she realize that he was anything but a safe bet—not
until it was too late to change the dark destiny in store for
her.

The Exact Location of Home by Kate Messner
The Christmas Princess by Patricia McLinn
Master (Book 5) by Robert J. Crane
Billionaire Undaunted: The Billionaire's Obsession ~ Zane by J. S. Scott
The Great Tree of Avalon by T. A. Barron
Under Her Skin by Lauren, Alexis
The Eleventh Plague by Jeff Hirsch
The Scarlet Letter Society by Mary McCarthy
Darkness Calls by Marjorie M. Liu
Through Time-Pursuit by Conn, Claudy
Our partner