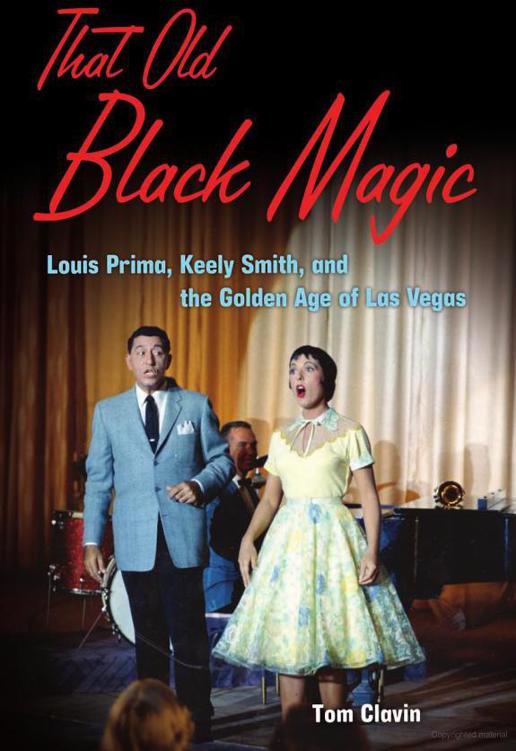 All photos courtesy of the author unless otherwise credited

To Leslie Reingold, for supporting me as a writer and—the much more difficult task—as a person.

ACT III
I Wish You Love

New Orleans native Louis Prima, a trumpet player and singer molded by Louis Armstrong, was already a grizzled veteran of stage and screen when he met his match. She was barely a performer at all, only half his age, destined for a relatively quiet life of raising kids and maybe singing in the church choir in Virginia. Their encounter was pure coincidence, thanks to an uncomfortably hot day when Keely Smith’s family, on vacation, bypassed New York City and caught Prima’s show in Atlantic City. But that chance meeting, after some rough years of hammering out the dents and enduring changes in American music, led to the creation of one of the hottest acts in U.S. entertainment history.

Prima and Smith were in the right place at the right time—at the epicenter of an exploding Las Vegas. Their act was instrumental in the transformation of a somewhat sleepy desert oasis into a city of a million lights, one of the most popular entertainment meccas in the world, a place where the biggest stars were paid bags of money to become even bigger stars as live acts and on television shows. Louis and Keely brought together broad comedy with finger-snapping, foot-stomping music that borrowed its energy from the emerging sound of rock ‘n’ roll. Listening to them, you wanted to jump, jive, and wail, and audiences couldn’t get enough. In the years before the British Invasion, their act, “The Wildest,” represented what was captivating, romantic, and downright sexy in American music—as much as or even more than Sinatra, Presley, and early Motown.

That Old Black Magic
is a showbiz success story with a love interest … or is it a love story against a background of showbiz success? In fact, it’s both, because the relationship—Keely married the big lug, which added spice to the act—might not have lasted as long as it did without the pulse-pounding dynamic of the stage act, which was like a mating dance done night after night, observed by their backup band, the appropriately named Witnesses. And the act was a lot more appealingly naughty because of the sparks between husband and wife, who got away with jokes and gestures that could have put another couple in jail (yes, even in Vegas).

But maybe the act was too hot to last.

Prima, who would have turned one hundred this year (2010), has been dead for thirty-two years, though you can still hear his braying, eternally cheerful voice on the soundtracks of movies involving Robert DeNiro, Martin Scorsese, and other filmmakers who continue to find him irresistible. Like her husband, Keely had a second phase in her career, but she had to wait many more years for it and survive even rougher times.

But survive she did. Once one of the best-selling songstresses in popular music, Smith was off the entertainment radar screen for decades. Then she performed at the Carlyle Hotel in New York City for the entire month of April 2007. I went, as did many others who wanted to see how she was holding up. She sounded amazing, a singer with a still-strong voice who grabbed the audience right away and held them all night, just like the old days. The critics loved her, and the Carlyle did turn-away business. Keely Smith was back, this time doing it on her own.

This book is about Louis and Keely and the paths they took together and separately. It is also about a certain time in Las Vegas that seems almost quaint now, though it was populated by plenty of mobsters, grifters, pimps and hookers, has-beens, losers, and some wishing desperately to be winners. But what a time it was, when Louis Prima and Keely Smith and the best in show business made music magic into the wee small hours of the night.

Yes, they were “The Wildest.” It was an hour before dawn on a Friday in the fall of 1958, and Louis Prima and Keely Smith, backed by sideman sax player Sam Butera and the band, were blowing the roof off the Casbar Lounge of the Sahara Hotel, which rivaled the Sands as the most popular nightspot on the booming Las Vegas Strip.

The finger-snapping, toe-tapping ruckus had been going on for over five hours with only a few short breaks. The Witnesses were jamming their way through “The White Cliffs of Dover.” Louis lay on the floor, on his back, kicking his feet in the air and blasting his trumpet. Sam crouched above him, blowing every ounce of breath he had through his saxophone. Back up on the tiny stage, Keely—filling out a white taffeta dress in all the right spots and not a strand of her pageboy-style black hair out of place—stood still, staring impassively out at the audience. She had seen it all before, and she’d see it again tomorrow night.

Yet for many members of the audience in the sweltering, smoky lounge, the act was unlike any other that could be found in Las Vegas. No one knew what antics Louis would get up to next, and his sidekick Sam was always there, trying to follow while at the same time leading that tight, tight band. This was the last of five shows that had begun at midnight. In every one, Keely, with those beautiful Cherokee-Irish cheekbones, alternated between belting out one of her signature ballads—“I Wish You Love” and “Come Rain or Come Shine” were real crowd-pleasers—and staring off into space. “I’ll stand in front of the piano, lean up against it, fold my arms and stand there for half an hour if I feel like it,” she told one of the Las Vegas dailies.

Louis would turn forty-eight in December, but he was like a big black bear in his prime, shouting and scatting and bursting sounds out of his trumpet while jumping around the small stage. All night he did it, all night, with Sam threatening to explode eardrums with his sax and the always-in-motion Witnesses seeming to make up their parts as the night went on.

Their interaction with the audience was nonstop, and the louder and the more ad-libbed the better. Because they were married, Louis and Keely got away with lewd gestures and double entendres that might have gotten other performers arrested (and this included on TV too).
Time
magazine the year before had referred to the act as “relentlessly vulgar,” which in Vegas was considered high praise. Radio stations refused to play “Closer to the Bone” because of Louis singing “My slice of Virginia ham is the sweetest meat to eat,” and the song was even raunchier live. It was just one of the reasons why the entire show was dubbed “The Wildest.”

The stage at the Casbar Lounge was so small that the band’s instruments sometimes touched the pitted white tile ceiling, which was barely visible through the foggy layer of cigarette smoke. On the aqua walls in the room hung African masks that appeared to stare at the stage with the same fascination as the audience. As the night wore on, half the audience had become lost in the cigarette smoke. There was only one spotlight and one microphone, but that was enough for a loud and unpredictable show.

Their music had a new sound because they had nothing to lose. Louis and Keely could play whatever they liked. Mixed in the same set could be Dixieland jazz, Benny Goodman, Louis Armstrong, Little Richard and other early rock ‘n’ roll beats, Charlie Parker, Frank Sinatra, and a gumbo of New Orleans free association. And the audience knew the favorites well, because Louis had made them his own over a long career: “Pennies from Heaven,” “When You’re Smiling,” “Jump, Jive, an’ Wail,” and, of course, “Just a Gigolo.” Though Louis rehearsed his group with a firm hand, once onstage they fed off each other. Louis encouraged spontaneity. Sam Butera explained, “I took what I liked and added my own thing to it.”

Every Breath You Take by Taylor Lee
Harry Flashman and the Invasion of Iraq by H.C. Tayler
Finding Carrie by C. E. Snyder
Daily Life in Turkmenbashy's Golden Age by Sam Tranum
Banded Together (Rebel Walking #2.5) by Storm, Hilary
The Paladin's Odyssey (The Windows of Heaven) by Powderly Jr., K.G.
Das Reich by Max Hastings
Fit To Be Dead (An Aggie Mundeen Mystery Book 1) by Nancy G. West
Strange Happenings by Avi
The Vampyre Legal Chronicles - Marcus by CC MacKenzie
Our partner