Read That Which Should Not Be Online

That Which Should Not Be 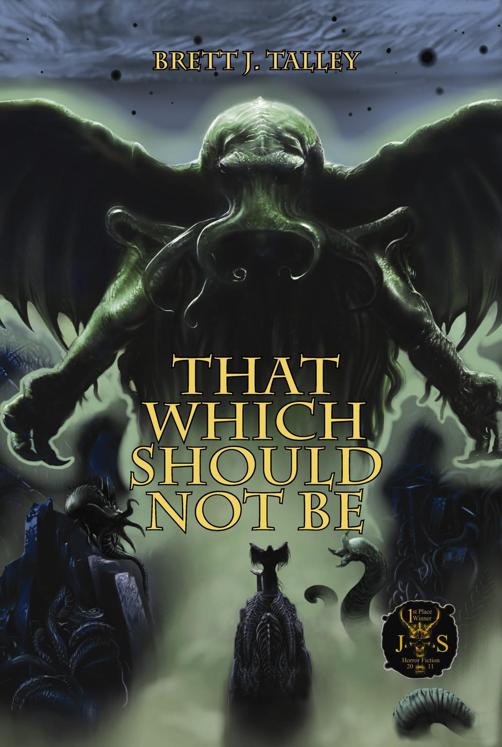 All rights reserved.  No part of this book may be used or reproduced by any means, graphic, electronic, or mechanical, including photocopying, recording, taping or by any information storage retrieval system without the written permission of the publisher except in the case of brief quotations embodied in critical articles and reviews.

This is a work of fiction.  All of the characters, names, incidents, organizations, and dialogue in this novel are either the products of the author’s imagination or are used fictitiously.

For all those without whom this book would not be.

Check out these titles from JournalStone:

Imperial Hostage, Book 1 of the

Reign of the Nightmare Prince

Available through your local and online bookseller or at www.journalstone.com

"We live on a placid island of ignorance in the black seas of infinity,

and it was not meant that we should voyage far."

The Call of Cthulhu

Enclosed please find a document which I believe you will judge most intriguing.  It was discovered among Mr. Weston’s personal belongings sometime after his disappearance.  In fact, it was the only document located in the wall safe in his office.  The contents are most fascinating, and despite the order and coherence thereof, I fear they raise grave concerns regarding Mr. Weston’s sanity in the last days of his life.  In order to ensure that Mr. Weston’s will is probated post haste, I would recommend destroying this document at once lest it fall into vicious hands.  I recognize this course may seem rather dramatic, but I believe once you have reviewed what can only be described as the feverish imaginings of a broken mind, you will agree it is better for all involved, not the least Mr. Weston himself, that it never sees the light of day.

The day has come, that day I always knew would, and my time is short.   But I must protect the Book.  I will not surrender it, no matter what the cost.  And if my life is to be forfeit, then I shall die as I have lived, standing against the black tide that would cover us all.

I suppose this could be called my final testament, for my family should know why I’ve spent the better part of my life in the dark corners of the world, why I have dedicated myself to the unspeakable horrors that lie beyond civilized man’s imagining.  I have hunted them from hell-blasted planes to yawning chasms that know no end, from the moonlit towers of fallen temples to demon-haunted ruins of unimaginable antiquity.  But never defeating them.  Nay, would that it were so.  Merely holding them at bay, as best I could, postponing what may well be their inevitable conquest.  No, one cannot kill what can forever lie in repose.  Sleeping.  Waiting.  And I fear the time of their awakening is upon us.

I hope my family can forgive me.  I hope they can understand why I have lived my life as I have.  I hope this testament will give them that comfort.  For it was not always to be so.  I had never expected to live in the shadows.  There was a time when my interests lay with quainter things.

Those were younger, brighter days.  My father was a Harvard man, and in his mind, so was I.  It broke his heart, I suppose, when I chose Miskatonic University of Arkham, Massachusetts, instead of that ivy-gabled institution.  I think back often now on that choice and I wonder what paths my life might have roamed had I listened to him instead.  Ah, but regret is a broken road that is better not taken.  Still, how things could have been different.

I arrived with no more extravagant dreams than that of the life of an academician.  And so I embarked upon a degree in history with a focus on the folklore of New England, a rich but narrow subject in which I intended to establish myself as the foremost expert.   It was in this pursuit that I made the acquaintance of Henry Armitage.

Henry was a brilliant mind, and even as a young man he was keenly interested in the occult and the role it played in the tales and myths of the common man.  He came to Miskatonic to understand the dark shadow of man’s desires.  The myths, I believed, at that time at least, leapt fully formed from primordial man, conjured merely to explain those things he did not understand.  I was surprised to learn that Henry did not share this view.  He believed there was more than a grain of truth embedded in those superstitions and ancient fears.

Perhaps in another environment the learned men of the University would have shattered such a faith, crushed it with the hammer of science.  But not at Miskatonic.  I heard the whispers, the rumors of the shadow that hung over the town of Arkham.  Miskatonic was witch-haunted ground, and there were those who spoke of nameless rites echoing through its darkened halls.  I pushed such talk aside.  I would brook no opposition to my chosen University.  In honest moments, though, I could face the truth, or at least the image of it.  I belonged at Miskatonic and not in a trivial, romantic way.  It called to me, pulled me, and since before I knew its name, I longed to be there.  In truth, I never felt at home until the day I arrived on its grounds.

But I digress now, and I must focus on the tale at hand.  My time is short; I know that now.  The stories I could tell would fill volumes, but the sands in the hourglass run thin, and I must ration my words.

It was Henry who suggested I study under Dr. Atley Thayerson.  It surprised me at the time, but for reasons I couldn't quite describe.  It was entirely appropriate I should take Dr. Thayerson’s class on Folklore and the Occult.  In fact, I suppose it would have been surprising to anyone familiar with my academic studies if I neglected to do so.  Yet, there was something inside of me, buried deep, that recoiled at the thought.  Not for any rational reason, none that I can articulate.  I had steeled myself against the growing sense of inevitability involved. But somehow, Henry’s simple suggestion of the thing defeated my apparently unimposing defenses.

Henry and I enrolled together, and it quickly became apparent to Thayerson that we were to be his star pupils.  I devoured the class and, in doing so, felt the birth of an obsession — the occult was to become my passion.  This will, of course, come as no surprise to those who know me; I have made the study of that subject my life’s work.  But at the time, it was a revelation.

In any event, I requested, and Dr. Thayerson eagerly granted, the opportunity to work more closely on the professor’s many and varied studies.  It was then that my eyes began to open to the dark forces that move in the uncultivated lands beyond the borders of the world we know.  But this was just the beginning for me, and my studies were merely that — an academic exercise.  I spent my weekends and every free moment traveling about the Massachusetts countryside, as far into the wild as the roads would take me.  Sometimes farther.  To ancient towns and villages peopled by simple folk to whom even Boston was a far away Xanadu of modern wonder.  I listened to their stories, obscure tales of late night visitations, of strange creatures that walked beneath darkened moons, of sleeping evils that invade men’s dreams.  I dutifully recorded these tales, and I smiled inwardly at the horrified looks on the simple villager’s faces as they relayed them.  I believed myself wise, and in my skepticism my wisdom was confirmed.  But I had no faith.

No, I found the occult fascinating in the way that folklore had always held my thoughts.  The study of myth helped mankind to understand truth.  It offered no such truth itself.  And then came that day in late January of my second year at Miskatonic when everything changed.

Deadly Pack (Deadly Trilogy Book 3) by Ashley Stoyanoff
Not Quite Forever (Not Quite series) by Bybee, Catherine
The Courts of Love: The Story of Eleanor of Aquitaine by Jean Plaidy
Stay by Hilary Wynne
How to Write by Gertrude Stein
The Next Little Thing (Jackson Falls #4) by Laurie Breton
Eraser Platinum by Keith, Megan
His Irresistible Darling by Sarah Randall
The Book of Bones by Natasha Narayan
The Missing by Beverly Lewis
Our partner