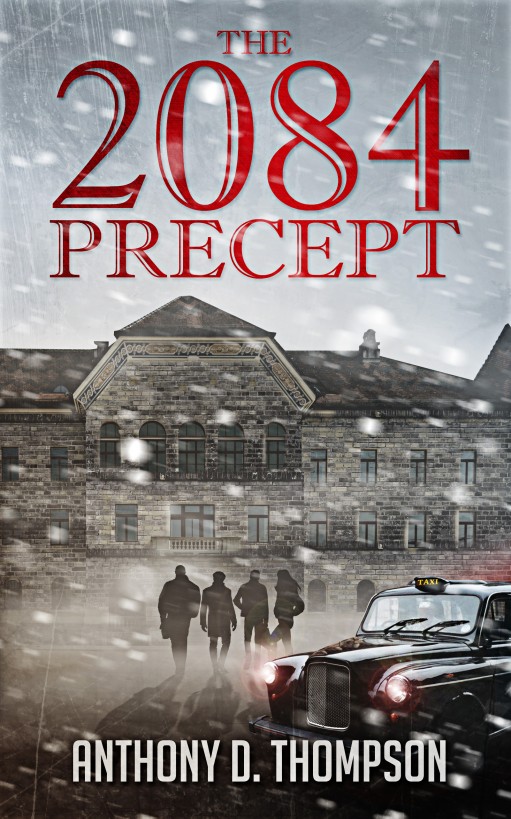 Anthony D. Thompson has asserted his right under the
Copyright, Designs and Patents Act 1988 to be identified as the
author of this work.

This book is a work of fiction. It has been invented
by me. Names, characters, places and occurrences are either
fictitious or are used fictitiously and any resemblance to real
persons, living or dead, business or any other establishments or
events, is strictly coincidental.

'Only two things are infinite, the universe
and human stupidity, and I'm not quite sure about the former.'

'Forgive them, for they know not what they
do.'

For Caroline, with huge amounts of love

The tall, blond man was standing in the
middle of the room. He was dressed casually. Sports jacket, chinos
and a polo shirt. He was looking out of the window. The trees were
leaning in submission to a strong wind and the snow was falling in
gusty swirls and had made everything white already.

Nice day, thought the man to himself. But
nothing which his overcoat and scarf wouldn't solve, and certainly
it was no danger to his relaxed good mood. On the contrary, he
liked wind and snow. Always had.

The room could have been a meeting room in a
modern budget hotel. Simple furniture, white walls, the décor and
the lighting easy on the eye. Looking good and smelling clean.

But the room was not a meeting room in a
modern budget hotel. It was a meeting room on a ward in a U.K. low
security unit for the mentally ill, a reduced security unit to
which the man had eventually been transferred as his apparent
return to sanity had become increasingly impossible to ignore.

The door to the room opened and he counted
the number of people as they came in. Fourteen. More than usual for
a meeting of this nature, as he knew. But then, as he also knew, he
was something of a celebrity. His was a rare case and had attracted
a lot of attention. He had been the subject of many professional
conferences, both internal and external, over a prolonged period of
time. Only to be expected of course. Years ago he had been
classified as potentially dangerous, both to himself and to others.
He had not actually harmed anybody but he nearly had. He
had
been insane. He had been classified as a DSPD patient—one of those
who suffer from dangerous and severe personality disorders of
various kinds. In other words, a potentially violent
psychopath.

All of this he knew and agreed with. And
then a remarkable improvement in his condition and his increasing
ability to intelligently discuss and analyze his past and present
situations had led to his transfer, thanks also to the modernized
principles enshrined in the 1994 Reed Report, from his initial high
security environment to a medium security one, and thence to this
low security unit.

The man's repeated requests to be released
and returned to the community had resulted in a gradual withdrawal
of all medication, accompanied by intensified psychological and
psychiatric testing programs, and followed by periods of escorted
'leave' outside of the institution. After his transfer to the low
security unit, a certain amount of unescorted leave was also added
to the program. And eventually a recommendation was presented by
the responsible consultant psychiatrist for an absolute discharge,
and had been approved by a First Tier Tribunal.

The man had been aware of the applicable
procedures and of the fact that neither the Ministry of Justice nor
any other jurisdictions were involved, as his detention had not
been subject to any restriction orders, criminal or civil. He was
consequently not surprised about the discharge being an absolute
one. Such discharges were rare for inmates with his given medical
history, but they were not unknown. They must have been totally
convinced of his return to sanity or, possibly, had considered his
detention all those years ago to have been a mistake of some kind,
faulty judgment perhaps, or even that his mental illness had, at
that time, and for whatever reason, been intentionally faked.

As the others sat down, the man also took a
chair out of courtesy, placed his small suitcase beside him on the
floor and laid his overcoat and scarf on top of it. He was calm and
collected, and he continued to glance out of the window. At the
snow, at the wind, at the freedom.

As is usually the case, he had been informed
of his release several days ago. This was merely the formal
goodbye. They told him again of his aftercare rights under section
117 of the MHA. They informed him that mental health and social
care needs would be provided under the CPA umbrella whenever he
wished and for as long as he wished. And they hoped that he would
be taking advantage of such facilities, in spite of his statement
to the contrary.

The man had no friends. A social worker
would, for one week, take over control from the Court of Protection
of the £50,000 he had inherited when his mother had died two years
ago, after which control of the full amount, less accommodation and
related costs incurred during that week, would revert solely to
him. They confirmed that the taxi had been ordered and would arrive
in thirty minutes. They confirmed that it would take him to the
hotel he had requested, where adjoining rooms had been booked for
himself and a CPN, a community psychiatric nurse who would assist
and further evaluate him until a community support worker had
helped him obtain permanent accommodation. They reiterated their
wish that he maintain regular contact with the aftercare team. And
at the same time, they again made it clear to him that, as mandated
by the law, he was free from restrictions of any kind. They handed
him his private documentation and his copies of the
non-confidential medical documentation pertaining to his case
history. And they wished him well.

The man had given them his full attention
during these proceedings. He had done so out of courtesy and also
because he had no reason whatsoever to want to cause them any
inconvenience, let alone trouble. These were pleasant people and
they were genuine professionals. They had treated him well, and
they were proud of their involvement in his progress toward a
discharge.

He smiled and looked around the group for
the last time. The Consultant Forensic Psychiatrist, who was also
the Clinical Director, was there. One of his assistants was there.
The unit's general manager was there. A psychologist was there. Two
registered nurses were there. A physiotherapist and an occupational
therapist were there. The designated CPN, two social-cum-support
workers, two health care nurses and a researcher were also
there.

He stood up and said thank you. He wished
them continued good health and success in both their professional
and their private lives. He put on his overcoat and scarf. There
was some shaking of hands and then he and his suitcase were
accompanied out of the room by two male nurses. In addition to low
security patients, there was a small medium security section on
this site, and they had to pass through two locked doors to exit
the ward and enter the main corridor. They then walked about one
hundred meters to the next set of locked doors and hurried out into
the swirling snow and crossed over an internal road to the
reception building. Two electrically operated doors controlled
their passage through the airlock area and then, nodding to the
area's two gatekeepers, they moved on and out into the
institution's open portal.

The three persons who would be accompanying
him to the hotel arrived and they waited and watched the snow
swirling and falling until the taxi appeared. They climbed into the
taxi and it drove off into the whiteness, its lazy light-blue
exhaust spirals being snatched up by the wind and blown back
without delay into their previous state of non-existence.

It was just one of those ordinary days.

A day pushing us closer to the middle of the
second decade of the twenty-first century.

Assuming of course that you happen to
patronize the Gregorian calendar, a solar calendar introduced in
the year 1582 to replace the Julian calendar mandated by Julius
Caesar’s minions in the year 46 BC. This reformed calendar changed
the length of the year by 0.002%, and retroactively confirmed its
starting point as the year of birth of the key deity in one of our
religions or, if you prefer, that deity's self-proclaimed
representative, but in either case in human form. Universal
acceptance of the calendar in the western world took its time, but
its adoption by Greece in the year 1923 completed the process.

On the other hand, if you are one of the
large number of people who use a Chinese calendar, things become
more complicated. The Chinese have many calendars, including lunar
ones with 354 days to the year, and they are all pretty
complicated, and you could now be in the year 4,711 or in the year
102 or in some other year, depending on which one you use. You also
need to do as many Chinese do, and use converter-calendars to check
with the Western one in order to know how old you are and so
on.

Alternatively, you may be the user of an
Arab calendar, of which there are also many. But you would normally
be the follower of one of the Islamic ones which tell you that you
are in the year 1435 AH (the starting point here being the date of
a journey, more or less forced, of that religion's self-proclaimed
key prophet from Mecca to Yathrib (or Medina, as the latter is
nowadays called).

And of course if you operate on the basis of
a Hebrew calendar, whether you are of the Jewish religion or not,
the method used to measure your time is a notably singular one.
This calendar is what one might describe as a lunisolar one. It
gauges time by comingling three unrelated astronomical phenomena:
the Earth’s rotation on its own axis, its own revolution around the
sun, and the moon’s revolution around the Earth. Those utilizing
this calendar are aware of the fact that the resulting inaccuracies
require the corrective interpolation of a thirteen-month year from
time to time. And you are now in the year 5775 which, as you know,
is when both the universe and the human species were created.

Not that it matters in the slightest, does
it, what year we humans are in.

The Barter System by McClendon, Shayne
Why Does it Taste so Sweet? by PJ Adams
The Parting Glass by Emilie Richards
Blood in the Fire (Timelaws Trilogy) by Marise Ghorayeb
Shalako (1962) by L'amour, Louis
A Fairy's Guide to Disaster by A W Hartoin
White Dog Fell From the Sky by Morse, Eleanor
Revocation (The Canyon Wolves) by Fields, Laura
A Walk in the Park by Jill Mansell
The Wet and the Dry by Lawrence Osborne
Our partner