Read The a to Z of Plant Names: A Quick Reference Guide to 4000 Garden Plants Online

The a to Z of Plant Names: A Quick Reference Guide to 4000 Garden Plants 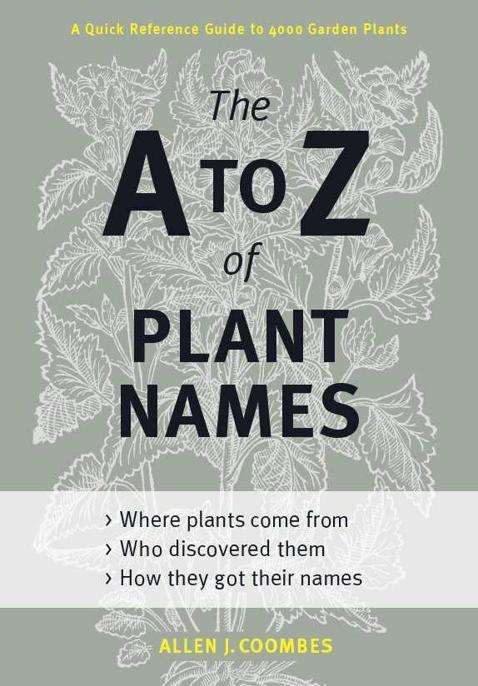 The A to Z
of
Plant Names

The A to Z
of
Plant Names

A catalogue record for this book is also available from the British Library.

To Piers Trehane, a good friend as well as a valued mentor and critic, sorely missed.

I would like to thank my wife for her continued patience, support and encouragement throughout this work.

Thanks to the editorial team at Timber Press, especially Franni Bertolino and Anna Mumford, who have been a joy to work with.

Lastly I would like to thank all those institutions worldwide that have made their herbarium records freely available to all, and without which this book would have taken many more years, and miles, to complete.

A
S PLANTS ARE ESSENTIAL
to man’s existence, providing food, medicine and shelter, plant names are surely as old as language itself, and we can imagine that early man needed names for the plants and plant products that he used or traded. Although plants were documented soon after the earliest written languages appeared, several thousand years BCE, the first systematic documentation of known plants is owed to the Greek scholar Theophrastus in the 4th century BCE. Many of the names he used (as well as those given by later Greeks, such as Dioscorides, and Romans, such as Pliny the Elder) are still in use today, though not necessarily for the same plants.

The rest of the world was slow to take advantage of what the Greeks and Romans had accomplished, and it was not until the 16th and 17th centuries that serious efforts were made to name plants. This was a particularly important time as many new discoveries were being made in various parts of the world. The plant names used at this time were in the form of a descriptive phrase starting with the name of the genus and listing key characters that would distinguish a species from its relatives, with different authors providing different phrase names for the same plant. It was not until the publication of
Species Plantarum
by Linnaeus in 1753 that plant names existed in the form we know them today. In this, Linnaeus listed the phrase names applied by himself and others but, as well as the name of the genus, also gave a single word to denote the species. These were originally regarded as trivial names, a sort of aide-memoire to the full names that, as more species were described, were becoming increasingly lengthy. For example, Linnaeus called common holly
Ilex foliis ovatis acutis
spinosis
, i.e., the holly with ovate, sharply spiny leaves, and added after this the word
Aquifolium
.

These trivial names were quickly adopted as the standard way to write plant names, and this binomial (two-name) system is the method in use today. The beauty of this system lies in its simplicity, making plant names instantly recognisable as such and while at first glance they can appear strange, each has its own story to tell.

What makes a plant name

While the name of a genus is a noun, the species epithet is usually an adjective, so
Quercus rubra
is literally ‘the red oak’. As Latin is one of the languages, that, unlike English, assigns gender to nouns, the adjectival species epithet needs to agree with the genus. As
Quercus
is feminine, the female form of the adjective is used. With genera of different genders, the ending would change: neuter,
Acer rubrum
; masculine,
Centranthus ruber
. Not all epithets are subject to change. When a plant is named after a person and the epithet is the person’s name in the genitive, the ending agrees with the gender of the person, so the
-ii
ending applies only to plants named after men. The epithets of plants named after women have a different ending, e.g.,
Kniphofia northiae
, after Marianne North. If, however the ending is the name as an adjective, the epithet does agree with the genus. Examples of these are
Acer davidii
, named after Armand David, and
Forsythia giraldiana
,
named after Giuseppe Giraldi. As noun and adjective, these give the names subtly different meanings, with the first translating as David’s maple, the second as Giraldi forsythia. Occasionally the epithet is a noun and is not altered by gender. For example,
Styrax
is masculine and the adjectival epithets end in
-us
, as in
S. americanus
. However, the epithet of
S. obassia
is a noun derived from the Japanese name, so retains its original form.

Cultivars are selections maintained in horticulture by means that retain their distinguishing characteristics. They are capitalised, are not written in italics and are enclosed in single quotation marks (e.g.,
Magnolia
×
soulangeana
‘Lennei’). Many cultivars have epithets in Latin form, but any named since 1959 must have names in a modern language. Some of the more popular cultivars with names in Latin form are treated here.

A group can be regarded as similar to a cultivar in that it is only recognised in gardens but can contain many variants that share the same characters and often includes cultivars. The cabbage, for example, is a group within the species
Brassica oleracea (Brassica oleracea
Capitata Group), and all cabbage cultivars belong here. Species or divisions within species no longer recognised as botanically distinct can be regarded as groups if they are distinct in gardens. For example,
Celosia cristata
and
C. plumosa
, formerly recognised as species, are now regarded as falling within the variation of
C. argentea
. Their distinctness in gardens, however, can continue to be recognised by calling them
C. argentea
Cristata Group and
C. argentea
Plumosa Group.

Hybrids that are recognised botanically have a multiplication sign immediately preceding the epithet.

The origin and meaning of plant names

Plant names are of diverse origin. They can be formed from the classical languages, from personal names, the name of a country where they grow or from one of their common names. This is why they should be referred to as scientific, rather than Latin, names; and the term Latin name used here refers to names used
in Classical Latin. Whatever their origin, plant names are regarded as being in Latin form. The name of the genus is often from mythology or named for an eminent person, not necessarily connected with the plants in question. The species epithet is more likely to have a direct association with the plant it represents. It could relate to a particular character of the plant or the part of the world it comes from, or it may commemorate a person who had some association with the species. Species can be named for someone who provided assistance to the author or collector, or in some cases someone who recognised it as distinct but gave it another name, but are more often named for the person who collected what is referred to as the type specimen. This is a herbarium specimen that was used to prepare the original description of the species.

Whatever the origin of a name or epithet, knowledge of its meaning gives it added significance and often makes it easier to associate with a plant. Knowing the meaning of a name is only one step in this process. To link the name to a plant, it is more important to know why that name was chosen. Commemorative epithets may do little to help with recognition, but they often add a great deal of historical interest by linking a plant to its discoverer or the person who first collected it. Descriptive epithets on the other hand often make it easy to link the name to the plant. It is only necessary to know that
pardalis
is Latin for a leopard, to link the name to the leopard-like spots on the flowers of
Lilium pardalinum
. However, names can also give the wrong impression of a plant.

When a plant is named, the author may have had very little material to go on. The chosen name, therefore, may not represent a state that is typical of that genus or species. When Linnaeus named the genus
Arenaria
, for example, he had relatively few species available to him. The generic name is derived from the fact that several of these grow in sandy soils. It cannot be assumed, however, that this applies to all species and some even grow in marshes.
Dictamnus albus
, commonly grown in gardens and named for its white flowers, is often seen with flowers in shades of
pink to purple. Names can also be misleading, as with
Pinus palustris
, the name of which implies that it grows in marshes, while it prefers well-drained soils. Occasionally the country of origin is wrongly identified.
Simmondsia chinensis
, for example, was thought to be a native of China but is, in fact, from California.

In addition, the meaning of many place names have changed with time; for example, in the time of Linnaeus, Canada would have included much of the northeastern USA, and plants with the specific epithet
canadensis
cannot be assumed to have been described from Canada, although they may well occur there.
Glandularia canadensis
, for example, is not a native of Canada. Spellings can also change with time so that some plant names can appear misspelled. For example, ‘Pensylvania’ was a commonly used 18th-century spelling for Pennsylvania, and so plant names that use the single
n
are not considered incorrect. Chinese place names have also changed a great deal, and so we come across the epithet
hupehensis
for plants described from Hubei (previously Hupeh), or
cantoniense
for plants from Guangzhou (previously Canton).

The Lag (The Game Master: Book #1) by Alex Bobl
L’épicerie by Julia Stagg
Finagled by Kelso, Rachel
Mind Switch by Lorne L. Bentley
Death Watch by Jack Cavanaugh
The Stork Club by Iris Rainer Dart
Stronger by Jeff Bauman
Quarter Past Two on a Wednesday Afternoon by Linda Newbery
The Stone Book Quartet by Alan Garner
A Land Of Fire (Book 12) by Morgan Rice
Our partner