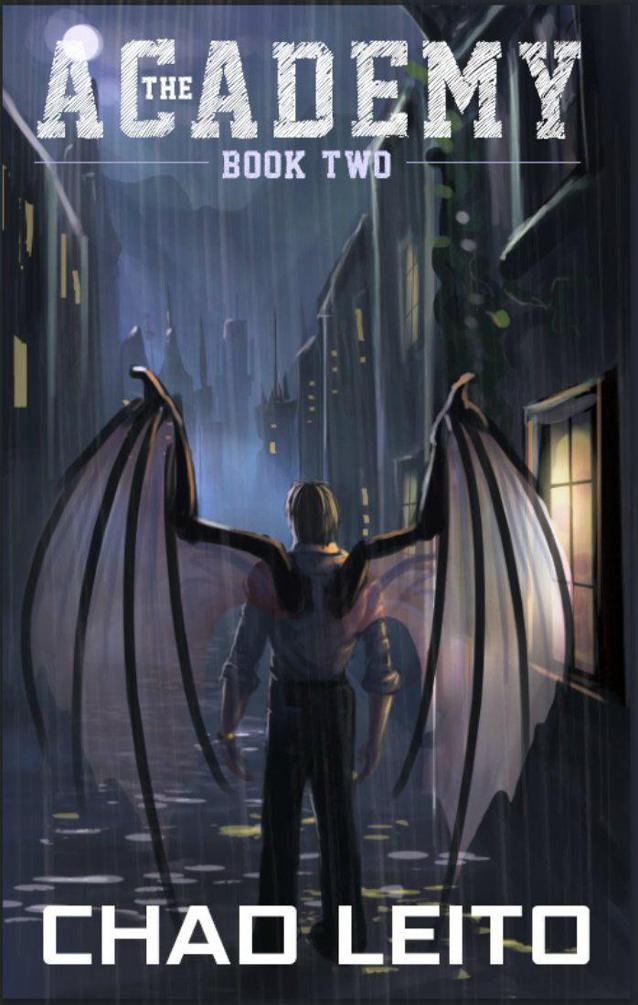 I would like to take a moment to thank a few people. I don’t want to take up too much of the reader’s time, but all of these people deserve recognition for having a hand in shaping this book:

It was morning time and Asa was walking through the forest to the side of his dwelling, thinking about his friend.

“Something is wrong with Teddy,” he said out loud, and the words made fog in the cold. The sentence was something that he had suspected for the last two weeks, ever since they had finished the King Mountain Task. Still, actually hearing it made him shudder. The Academy had changed the boy who used to look so young with red cheeks and thin blond hair into something…

He was alone, and roughly one mile deep into the forest that spread over the back portion of the second semester mountain. One month ago, he would have been much too nervous to travel back here alone.

With the 100 points he earned after completing the King Mountain Task, Asa had bought additional strength mutations, and was now almost three times as strong as a natural human would be. He could feel the additional strength in every step he took: it was like walking in water, and Asa very much enjoyed the sensation. He carried a spear in his right hand. He had used the drill on his armband to carve the weapon completely out of stone. After two weeks of practice, Asa could sling the projectile at over 80 miles per hour, and at 45 pounds, the weapon still had momentum after slicing its way through a rock dragon.

“I’ll be in trouble if I run into a herd of them, though,” Asa said to himself. He liked to talk aloud as he hiked.

He found that he wasn’t worried about the possibility of dying back here. He supposed that, like Teddy, he was changing too. He was less fearful of things, and was comfortable roaming the mountainside alone, despite all the mutated animals that resided in the forest.

Amidst the snow, he could see the mound of frozen dirt where he had buried Harold
Kensing, the police officer whom the Multipliers had left dead in Asa’s dwelling. Asa remembered the note they had left with the corpse in the ice bath.

“
THEY’RE MUCH MORE POWERFUL THAN THE FISHIE PLACE THINKS THEY ARE.”

YOU SHOULD CRAWL DOWN THE BACK OF THIS MOUNTAIN TONIGHT, ASA. TAKE TEDDY, IF YOU WANT. TAKE CHARLOTTE. BUT GO. WE WON’T STOP YOU. WE ENCOURAGE YOUR DEPARTURE. WE DON’T WANT YOU HERE, AND YOU’LL FIND THAT IT’S NOT WISE TO DEFY OUR WISHES.

P.S. - YOU SHOULD TOUCH SOME OF THIS INK AND SEE WHAT HAPPENS.

It had been right after the end of semester ceremony that he had found the note and the body. Crows were fluttering around Asa’s dwelling at that time. Now, there seemed to be less and less of the black birds in the skies and trees surrounding the Academy.

Teddy was pale when he saw what the Multiplers had left, and his eyes were just beginning to change into the tired, chronically ill looking ones he had now. “I bet that there’s some kind of acid mixed with the Multiplier’s saliva,” Teddy said. “If you touch it, it’ll sink into your skin, and you’ll change. At least that’s what I think.” There was a silence among them before Teddy spoke again: “They really want you to leave.”

Asa had looked at Teddy solemnly then. “I’m not leaving, Teddy. I’m not letting this place get overrun with those monsters.” Asa had decided to stand firm in his decision, even with the threat on the wall. If he and Charlotte left the Academy, or died, then the contract between Asa’s father and Robert King would be broken and the Academy would be allowed to make more Multipliers. If that happened, Asa was confident that the creatures would take over the world. As their name suggested, they had an insatiable urge to multiply, to make others like them.

Teddy started to snicker, and at first Asa wondered if he had said something funny. The snickering continued on and changed tones. That was the first time Asa considered the possibility that his friend was going crazy; there was something very off about the sound. Teddy covered his face, and his shoulders and chest rose and fell in sync with his breath. The snickering built until it was loud laughter, muffled by Teddy’s hands.

Without realizing it, Asa had taken a step back from Teddy.

Teddy doubled over, laughing even harder now. The laughter turned to cackles, and when Teddy removed his hands, his face was red and tears were streaming down his cheeks.

“Teddy?” Asa asked. He took another step back in the small dwelling.

“I’m sorry, whew!” Teddy said, wiping tears from his cheeks. “It’s just that sometimes I think that it might be… that it might… HA! HA! HEEHAH!” Teddy had another outburst of laughter that again made him unable to talk. He wasn’t covering his mouth anymore, and his lips were pulled back so that his teeth were exposed.

Asa glanced at the door. His back was against a wall, and Teddy, who was much stronger than Asa, stood between him and the only exit.

Showing great effort, Teddy gathered himself enough to get out the last few sentences of his statement: “The smart thing to do
is just drill you and Charlotte’s…HAHAHA!...heads off. And kill you, you know? Just take my drill and…WHAHAAHA!...over with!”

Asa was not laughing. He wasn’t even smiling. Teddy went on snickering for a moment before noticing this. The smile vanished and Teddy looked incredibly tired once more. His face looked numb, as though he had just gotten an anesthetic injection at the dentist. “I’m joking, Asa. No reason to be scared.”

Alone with Teddy, Asa found that he was indeed scared.

“Where should we bury him?” Teddy asked.

For the remainder of their encounter that day, Teddy had been closer to his old self. He still looked incredibly tired, and jumped on several occasions as birds flew overhead, but he never burst into uncontrolled laughter or made additional statements about killing Asa or Charlotte. They buried the body, and were home before the sun went down.

That was the first night since the King Mountain Task they had slept separately. Teddy slept in the safe-room that they had carved above Asa’s dwelling, and Asa slept down below, in the main chamber.

“He needs to talk about it,” Asa said to himself, stepping over Harold Kensing’s grave. Asa had expressed several times to Teddy that he believed talking about what was bothering him could help. Teddy had shied away from the issue each time it was brought up: Asa suspected that Teddy felt it would hurt too much to talk about the traumatic experience. And so Teddy let it fester.

Without realizing it, Asa was walking faster into the quiet woods, deep in thought. His head was down, and he hadn’t cried out and used echolocation to check his surroundings in minutes.

“And this rumor he keeps going on about… It’s crazy,” Asa said. A voice in the back of his mind rebutted:
maybe not crazy, exactly.

The entire Academy was talking about a bit of gossip that said the major Task this coming semester was going to be unlike any before. No one knew where the rumor came from, but everyone had heard it: Instead of having each semester perform their Task individually, all students would be competing at once in some sort of a gladiator-style battle.

“They wouldn’t do it, it wouldn’t be fair. You’d have Fishies fighting fourth semesters.”

But when have they cared about fair?
the voice retorted again.

Asa knew that the voice was right: he wasn’t in a place that treated people justly. He remembered how six months ago he had been apprehended in the woods behind his home and taken here, against his will. He had been kidnapped, along with all of his fellow students. Now, he was being put through the harshest program imaginable, trying to survive.

He had heard that later today there was to be some sort of a school gathering in which the leaders would explain what they could expect throughout the coming semester. The thought made Asa feel sick. After the King Mountain Task, the Academy had given everyone two weeks off to rest and recuperate: the rest was much needed, but Asa felt as though he wasn’t yet ready to hear what was in store for him next.

Asa was about to speak again, when he ran into something. He had been concentrating so hard on his thoughts that he hadn’t seen the object come into his field of vision.

Asa was so startled by the sight, and stepped back so quickly that he sat down onto the icy dirt. His eyes bulged, and he was about to start crawling backwards before he realized the grotesque thing in front of him was dead.

Some sort of ape had been strung up from a tree upside down. The animal hung by its ankles from a long, frosty rope. The body was now swinging gently back in forth in response to the contact that Asa had made with it. Like many of the mutated animals that surrounded the Academy, the animal’s skull was bigger than normal. The eyes had been gouged out and someone or something had slit the animal’s throat. The oddest thing about the entire scene was that the dead monkey was wearing clothes. The thighs were covered in old, ripped jean shorts. A white t-shirt that matched the monkey’s fur was pulled tightly over its torso. The massive hands hung down from lanky arms and were half a foot away from the earth below.

Summon Up the Blood by R. N. Morris
Chapter one by jaden Nakaning
Grace by Natashia Deon
The Bachelor's Bargain by Catherine Palmer
The Sellsword by Cam Banks
Where The Sidewalk Ends by Silverstein, Shel
A Frog in My Throat by Frieda Wishinsky
The Third Eye by Mahtab Narsimhan
Night-Bloom by Herbert Lieberman
We Shall Not Sleep by Anne Perry
Our partner