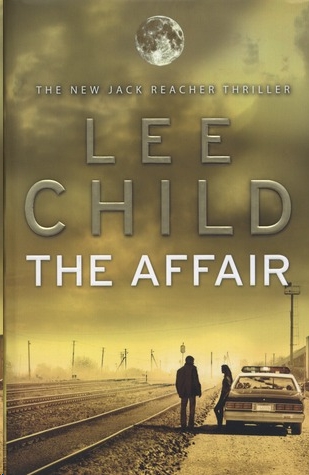 The Affair
is a work of fiction. Names, characters, places, and incidents either are the product of the author’s imagination or are used fictitiously. Any resemblance to actual persons, living or dead, events, or locales is entirely coincidental.

Title page art from an original photograph
by Reese Wilson

The Pentagon is the world’s largest office building, six and
a half million square feet, thirty thousand people, more than seventeen miles of corridors, but it was built with just three street doors, each one of them opening into a guarded pedestrian lobby. I chose the southeast option, the main concourse entrance, the one nearest the Metro and the bus station, because it was the busiest and the most popular with civilian workers, and I wanted plenty of civilian workers around, preferably a whole long unending stream of them, for insurance purposes, mostly against getting shot on sight. Arrests go bad all the time, sometimes accidentally, sometimes on purpose, so I wanted witnesses. I wanted independent eyeballs on me, at least at the beginning. I remember the date, of course. It was Tuesday, the eleventh of March, 1997, and it was the last day I walked into that place as a legal employee of the people who built it.

A long time ago.

The eleventh of March 1997 was also by chance exactly four and a half years before the world changed, on that other future Tuesday, and so like a lot of things in the old days the security at the main concourse entrance was serious without being hysterical. Not that I invited hysteria. Not from a distance. I was wearing my Class A uniform, all of it clean, pressed, polished, and spit-shined, all of it covered with thirteen years’ worth of medal ribbons, badges, insignia, and citations. I was thirty-six years old, standing tall and walking ramrod straight, a totally squared away U.S. Army Military Police major in every respect, except that my hair was too long and I hadn’t shaved for five days.

Back then Pentagon security was run by the Defense Protective Service, and from forty yards I saw ten of their guys in the lobby, which I thought was far too many, which made me wonder whether they were all theirs or whether some of them were actually ours, working undercover, waiting for me. Most of our skilled work is done by Warrant Officers, and they do a lot of it by pretending to be someone else. They impersonate colonels and generals and enlisted men, and anyone else they need to, and they’re good at it. All in a day’s work for them to throw on DPS uniforms and wait for their target. From thirty yards I didn’t recognize any of them, but then, the army is a very big institution, and they would have chosen men I had never met before.

I walked on, part of a broad wash of people heading across the concourse to the doors, some men and women in uniform, either Class As like my own or the old woodland-pattern BDUs we had back then, and some men and women obviously military but out of uniform, in suits or work clothes, and some obvious civilians, some of each category carrying bags or briefcases or packages, all of each category slowing and sidestepping and shuffling as the broad wash of people narrowed to a tight arrowhead and then narrowed further still to lonely single file or collegial two-by-two, as folks got ready to stream inside. I lined up with them, on my own, single file, behind a woman with pale unworn hands and ahead of a guy in a suit that had gone shiny at the elbows. Civilians, both of them, desk workers, probably analysts of some kind, which was exactly what I wanted. Independent eyeballs. It was close to noon. There was sun in the sky and the March air had a little warmth in it. Spring, in Virginia. Across the river the cherry trees were about to wake up. The famous blossom was about to break out. All over the innocent nation airline tickets and SLR cameras lay on hall tables, ready for sightseeing trips to the capital.

I waited in line. Way ahead of me the DPS guys were doing what security guys do. Four of them were occupied with specific tasks, two manning an inquiry counter and two checking official badge holders and then waving them through an open turnstile. Two were standing directly behind the glass inside the doors, looking out, heads high, eyes front, scanning the approaching crowd. Four were hanging back in the shadows behind the turnstiles, just clumped together, shooting the shit. All ten were armed.

It was the four behind the turnstiles that worried me. No question that back in 1997 the Department of Defense was seriously puffed up and overmanned in relation to the threats we faced then, but even so it was unusual to see four on-duty guys with absolutely nothing to do. Most commands at least made their surplus personnel look busy. But these four had no obvious role. I stretched up tall and peered ahead and tried to get a look at their shoes. You can learn a lot from shoes. Undercover disguises often don’t get that far, especially in a uniformed environment. The DPS was basically a beat cop role, so to the extent that a choice was available, DPS guys would go for cop shoes, big comfortable things appropriate for walking and standing all day. Undercover MP Warrant Officers might use their own shoes, which would be subtly different.