Read The Agent Next Door Online

The Agent Next Door 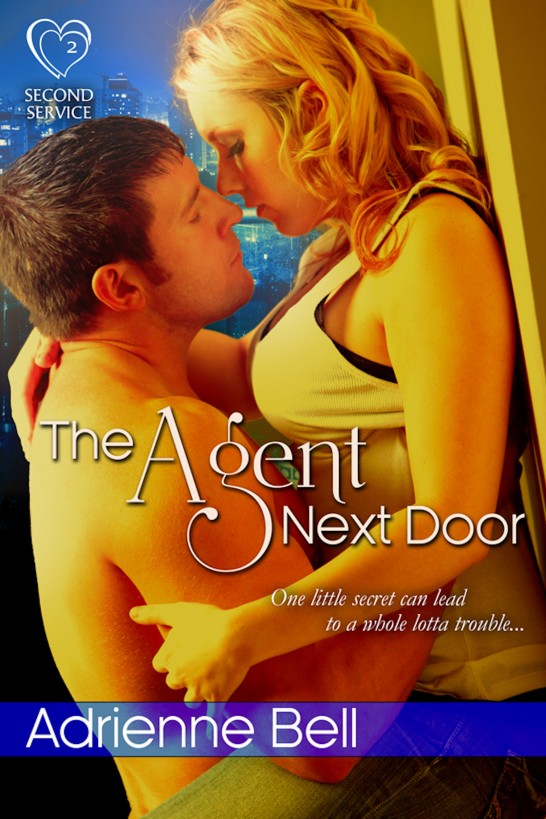 The Agent Next Door

ALL RIGHTS RESERVED. This book contains
material protected under International and Federal Copyright Laws
and Treaties. Any unauthorized reprint or use of this material is
prohibited. No part of this book may be reproduced or transmitted
in any form or by any means, electronic or mechanical, including
photocopying, recording or by any information storage and retrieval
system without express written consent from the
author/publisher.

This book is a work of fiction and any
resemblance to persons living or dead, or places, events, or
locales is purely coincidental. The characters are products of the
author’s imagination and used fictitiously.

“It looks like Number Thirty-two is finally
moving in. There’s a truck in the driveway and a moving van pulling
up now.”

Erin Holliday lifted her head from the flower
pot in front of her and looked up at Marianne Wilson. Her
octogenarian neighbor was up on her tiptoes, doing her best to peer
over the five-foot high boxwood shrub that edged Erin’s porch…and
failing. Marianne teetered to one side, and dug her hands deep into
the leafy top to keep her balance.

Erin winced at the sight of all the shiny new
leaves being crushed in her friend’s tiny, though by no means
frail, hands, but she didn’t say a word. She could bear to
sacrifice a few branches for the sake of keeping Marianne
upright.

Not that her protests would have mattered
anyway. If Marianne had made up her mind to spy on the new
neighbors moving in across their shallow cul-de-sac, then nothing
Erin could say was going to stop her. At least this way she was at
least partially shielded from sight.

“I was wondering when that was going to
happen,” Erin said, turning her attention back to the pot of orange
and yellow Gerbera daisies in the center of her crossed legs. She
pushed down the top of the soil, moulding it into place. “It’s been
empty for weeks.”

“Almost two months,” Marianne corrected her.
Erin didn’t doubt her accounting. Marianne could probably tell her
the exact date the house had sold.

Erin looked up at the grating sound of her
weathered wrought iron bench being dragged from the corner by her
front door. Ivy tendrils that had long ago wrapped around the
scroll work arms snapped as they were torn from the wall.

“What?” her friend said without lifting her
head. “Would you rather I climb up on this ridiculous bush. I don’t
even know why you planted the damned thing here. You can’t see a
thing over it.”

Marianne harrumphed loudly as if that were
the most ridiculous thing that she had ever heard.

Erin watched as Marianne hoisted herself up
on her new perch. Her head and shoulders showed high above the flat
top of the shrub. She twisted around and gave Erin a victorious
grin.

Great. There would be no talking Marianne
down from there now, not when there was juicy gossip to be had. And
in this neighborhood, a new face was about as juicy as things got.
Fortunately, that was how Erin liked it, but she had a feeling that
Marianne was always hoping that something a little more exciting
would happen.

But it never did. Not in the Silicon Valley
suburb of Emerald Glen, and certainly not on Shannon Court. Every
few months someone in the surrounding neighborhood would pack up
and a new family would move in.

For the most part, Erin liked her neighbors,
steady wage workers for the surrounding tech companies and their
families. They were polite people, calm and quiet, just waiting to
move up in the world.

“Do you know who is moving in?” Erin asked,
hoping to keep Marianne occupied for a little while longer.

“Not really. The Goldmans didn’t have much
information about the people who bought the house from them,”
Marianne said.

Erin smiled as she pulled her spade from the
bag of soil at her side. So there was a limit to the woman's
gossiping powers. “I wonder why it took them so long to move
in.”

“We’ll find out soon enough. The movers are
opening up the back of the van now.” Marianne’s voice went up an
octave, her excitement shining through.

It was turning out to be a lovely summer
Saturday. Erin had a new batch of flowers to replace those that had
withered in last week’s sweltering heat wave. The sound of kids
playing somewhere in the neighborhood drifted across the courtyard.
Later, the Michalsons were going to have a barbecue, but she had
plenty of time before then to finish up all her yard work. Even the
weather was obeying. It was warm but bearable in the dappled shade
of her wood-planked porch. All in all, it was a perfect day to sit
out and listen as Marianne babbled on about the shape and size of
every box and piece of furniture as it was hauled from the moving
truck.

“It's not a very big van,” Marianne started.
Erin gave a generic sound of interest, as she pulled a cluster of
impatiens from the plastic container. “Certainly not big enough to
fill that whole house. I hope there’s another one on the way,
because that dinky van can’t possibly have—”

Erin lifted her head. Nothing ever shut
Marianne up. Nothing. But there she was, her palm clasped over her
mouth.

“Oh, my,” Marianne whispered between her
fingers after a moment had passed.

Erin put the pot down by her side. “What is
it?”

“What? What?” Erin uncrossed her legs,
grabbed onto one of the rungs of the ivy-covered trellis at her
side and hoisted herself off the ground. She cursed under her
breath as she rose. She'd been sitting there so long that her foot
had fallen asleep. The second she put her weight on it, electric
pinpricks shot up her leg. She hobbled over to the bench as best
she could.

Erin peered across the street, expecting to
see a Swarovski chandelier, or a collection of dungeon equipment,
or a live donkey—anything that would merit such a stunned reaction.
But there was nothing.

Marianne shook her head. “Not a what, a
who.”

“Are you blind? Check out your new
neighbor.”

Marianne held out a boney finger in the
direction of a man walking down the path.

He was big, wide at the shoulders with arms
that stretched the limits of his plain grey T-shirt. His jeans fit
his muscular legs perfectly. His hair was dark and military short.
His features were as large and strong as the rest of him.

“He's a handsome devil, isn't he?” Marianne
said as he strode purposely from his front door to the edge of his
drive.

As much as Erin hated to admit it, Marianne
was right, especially about the devil part. The stranger across the
street was unnaturally good-looking, and there wasn’t any use in
pretending otherwise. Not that it mattered. One look, and Erin
could tell that he was trouble. She saw it in the strong line of
his shoulders, the confident cock of his head, his steady,
unworried gait—this was a man that was used to being in control.
The kind that always got his way. The kind she’d spent the last
twenty years of her life trying to avoid.

So why couldn’t she turn away? It was almost
as if the man demanded attention.

An electric tingle started down Erin’s spine,
radiating clear down to her fingertips and toes. The sizzles? Erin
shook her head, desperate to clear it. This guy couldn’t give her
the sizzles. She wouldn’t allow it.

He came to a stop at the edge of his wide
green lawn, looking over Shannon Court. Just before his gaze
reached her house, Erin ducked down on the bench below.

“Are you all right?” Marianne asked.

Marianne must not have been too concerned.
She turned immediately back toward the street. She raised her arm
above her head and waived in a wide arch.

“I certainly hope so.” Marianne’s eyes lit
up. The crinkles that surrounded them lifted.

Damn. Erin should have known better than to
put ideas in her friend’s head.

Marianne started to jump up and down on the
bench. “Yoo-hoo! Number Thirty-two!”

“Stop it. You're going to fall.” The last
thing she needed was for Marianne to break a leg in her
exuberance.

Marianne shot her a sour look. “Well, you're
no fun today. I don't see why you care. If you're not going to
stake your claim on him, then I'm going to try.”

“Seriously, Marianne. Quit it. He doesn't
look like the kind of man that you want to mess with.”

“Speak for yourself, doll. That man is
exactly
the kind I’d like to mess around with.”

Erin hung her head. Why did she even try?

“That's right! Over here.” Marianne smiled
down at her. “He’s coming over.”

Of course he was.

Erin sunk down from the bench to the floor
and started to scoot over to the corner of the porch.

“What in the world are you doing?”

“Nothing. Just getting back to work,” Erin
said, wedging herself as deep as she could into the shadows of the
ivy-covered trellis.

Marianne’s brows pulled together in a tight
V. She slowly shook her head. “Sometimes I worry about you,
child.”

She didn’t have to worry for long. A second
later, a deep voice sounded from the edge of the boxwood.

The knot that had formed in Erin's chest
clenched tighter around her heart. His voice sounded just like
she'd imagined it would. Strong and unflappable. Unbidden
adrenaline rushed through her body. She did her best to still the
shaking that crept into her hands, but it was hard. They refused to
stop trembling.

She had to get a grip. It was too late to
bolt now, and there was no way in hell she could leave Marianne
alone with this guy. There was no telling what she would do. It was
amazing that a woman with so little common sense had managed to
make it to eighty-two.

“Hi there, neighbor,” Marianne said, as a
shadow fell over the fence and on to her patio. Erin leaned back a
little farther in the shelter of the ivy. “I'm Marianne
Wilson.”

“John Ryman.” His voice was steady and
low.

“We were wondering when we were ever going to
see you.”

“Erin and I. Erin's the one hiding in the
ivy.”

The breath stopped in Erin's throat. Once she
got it back, she leaned out a few inches, and tried to laugh. The
sound came out high and tinny, every bit as desperate as she
felt.

She risked a glance up in the man's
direction. His expression gave nothing away. If he thought it was
strange that she appeared from a shroud of ivy, he didn't show it.
His lack of reaction only made her feel worse. He was in control.
She wasn’t.

He didn’t help her nervousness by looking
away. His eyes stayed on her a few seconds longer than they should
have. It shouldn’t have surprised her. She probably would have
stared too. She had to look like a hot mess in these ragged, dirty
clothes and her hair poking out from under the edges of a ball cap.
But, really, who dressed up to garden?

Then again who hid in trellises when strange,
large men walked by? Crazy people, that’s who.

“Hello,” he said, before finally turning back
to Marianne. “Is this your granddaughter?”

Marianne barked out a high laugh. “Erin? Oh,
heavens no.”

“We're neighbors,” Erin said, shaking her
head furiously. “This is my house. Marianne lives across the way on
Fairview.”

Erin nudged Marianne in the side with her
elbow. The woman didn’t even flinch.

“That's a mighty small moving truck you’ve
got there,” Marianne plowed on.