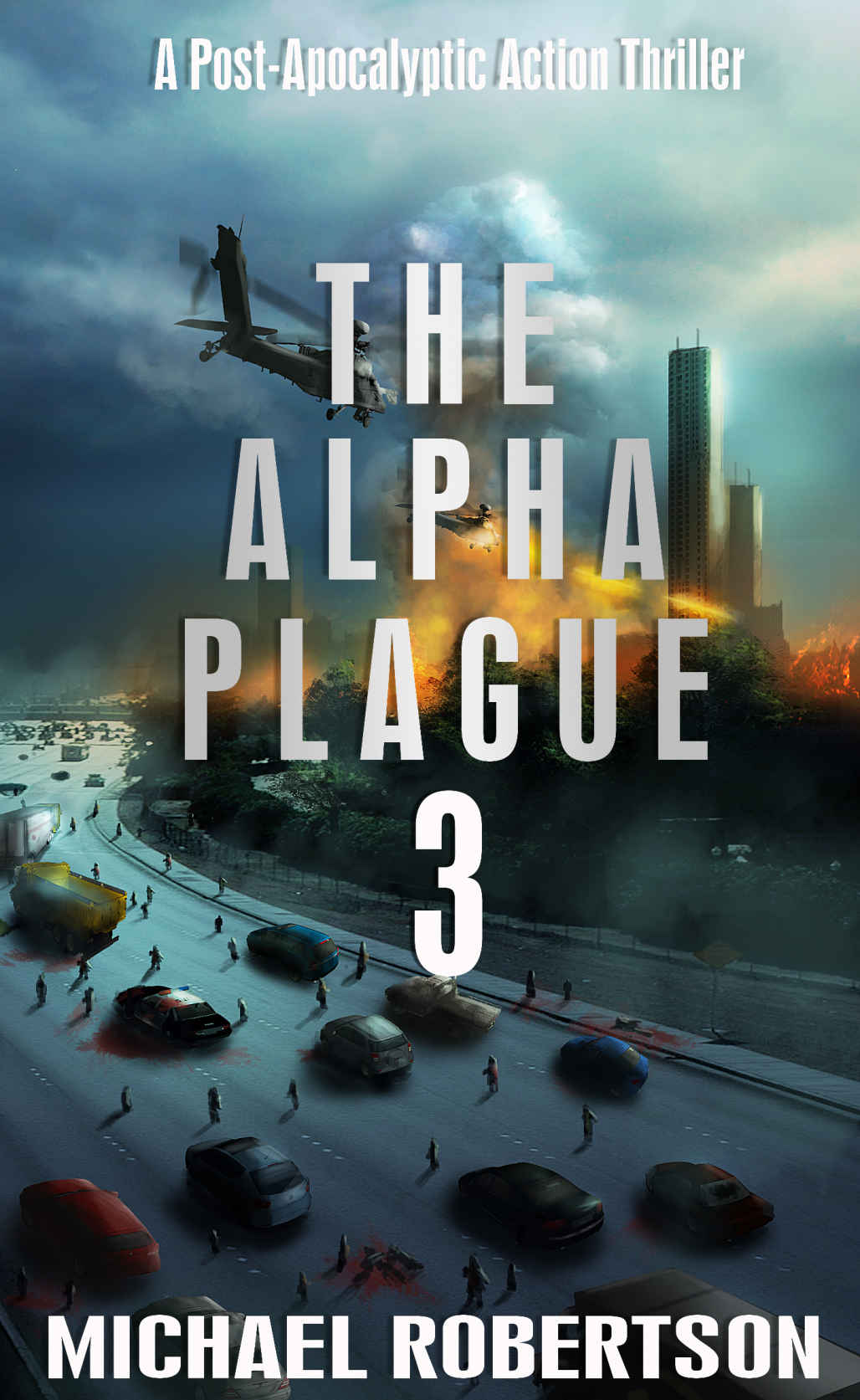 Other Authors Under The Sheild Of Phalanx Press

The Alpha Plague 3
is a work of fiction. The characters, incidents, situations, and all dialogue are entirely a product of the author’s imagination, or are used fictitiously and are not in any way representative of real people, places or things.

Any resemblance to persons living or dead is entirely coincidental.

No part of this publication may be reproduced, stored in a retrieval system or transmitted in any form or by any means electronic, mechanical, photocopying, recording or otherwise, without the prior written permission of the author except in the case of brief quotations embodied in critical articles and reviews.

Physically exhausted and still reeling from the shocking image in front of him, Rhys stared at the blood all over the police car and shook from his toes up. He reached out and rested against the vehicle for balance, the metal still warm from the day’s sun. His head felt too heavy to hold up, so he looked at the ground as he drew deep breaths. Vicky had Flynn, but where the fuck had she taken him?

So much blood had been spilled inside the car that some of it had flooded out onto the road. It glistened in the fading sun. The smell of the diseased mixed with both the metallic reek of blood and the acrid tang of burning plastic from Summit City.

Several more deep breaths and Rhys gulped back the chemical taste from the fire. He lifted his head and looked around. There had to be a trace of Flynn somewhere; a trail they could follow. Thankfully, there didn’t seem to be a trail of blood. Vicky would take care of him as she promised she would. But a near-stranger’s promise offered little comfort to a father in need of his son.

Rhys hadn’t ever seen the approach road so quiet. He’d only used it in rush hour and now there would never be one of those again.

The door to the control booth for the drawbridge hung wide open. Rhys looked at the smoked Perspex windows. Maybe they’d been clear at some point before sweaty body after sweaty body had funked the small hut up. The unintentional frosting seemed to be years’ worth of perspiration and dirt. A gap of about ten metres separated Rhys from the booth. Despite the distance, Rhys could almost smell the stale hut from where he stood. Fuck knows how people spent their days inside it.

Rhys looked across the river to see Summit City burning and could feel Larissa’s attention on him. The press of her panic pushed into the side of his face like the heat from a strong fire, but he didn’t have any answers for her. Their boy and Vicky were gone, what else could he say?

Rhys allowed the glowing horizon to hypnotise him and continued to watch the place burn. In a short time, the horrible city would be no more than ashes; maybe they’d be somewhere safe with Flynn by then.

The crackle of fire and pop of windows filled what would have been an otherwise quiet evening and was better than the screams of the diseased. He’d be happy to never hear
that
again.

With the shutters now retracted, the skyline once more stood as rows of tower blocks rather than phallic steel pillars. Although, they weren’t the tower blocks that Rhys had become familiar with; these ones stood windowless and charred as black smoke poured from the open spaces. The shining examples of commercial architecture were now no more than skeletal husks.

After a short while, Rhys’ eyes stung and his vision blurred from where he hadn’t blinked. The fire seemed to have done its job. Hopefully, it had killed all of the diseased including Dave. The poor man didn’t deserve to suffer. None of them did. But even his thoughts of Dave seemed like a distraction. Something to take him away from the same question that repeated through his mind …
Where the fuck was his little boy?

When Larissa walked over to Rhys’ side, he tensed at her close proximity. He didn’t need her aggression on top of everything else. He had no answers for her.

When he looked at her, she stared straight back, accusation in her green eyes. He said nothing.

After she’d looked from Rhys to the inside of the car and back to Rhys again, she spoke with such a sharp tone her words came out as razor blades.

It seemed more like an attack than a question. How was it Rhys’ fault? He took a moment to gather his thoughts. After a deep breath, he said, “Yep.”

The panic of a mother, as justified at it was, hurt Rhys’ ears as Larissa’s tone became more shrill.

“I watched him bury it into enough diseased faces.”

“But it’s just an axe.” Rapid breaths rocked her frame. “It could be anyone’s.”

The sting of tears burned Rhys’ eyes as his fear momentarily overwhelmed him. His boy was out there somewhere. He’d had everything he’d wanted and he’d fucked it all up when he went back into the city for Larissa and Dave. He shook his head.

“It’s not just anyone’s, Larissa. It’s not a coincidence. Why do you think Vicky was running when we heard her?”

With wide eyes, Larissa dragged a hand over the top of her head and held her short black hair away from her face. She clenched her jaw and breathed through her nose.

“No, it can’t be,” she finally said. “There
must
be a mistake. I thought you trapped Oscar in the city.”

“I thought so too, but that’s
his
axe. I hope I’m wrong but we need to plan for the worst so we’re prepared.”

Larissa’s mouth turned down at the corners and tears glazed her stare as she looked from one of Rhys’ eyes to the other.

With a hand on Larissa’s slim shoulder, Rhys squeezed it and said, “I don’t mean we should plan for Flynn to be … ” the hot lump in his throat cut his words off, “well, what I mean is that we need to plan for Oscar to be out of the city. Not for anything to have happened to Flynn. We’ve just heard from Vicky, so we know he’s okay at the moment.”

Before Larissa said anything in response, Rhys’ grief overwhelmed him and his vision blurred. He looked at the burning city again.

“I thought I knew fear, and then we had Flynn. Now there’s someone out there who I care infinitely more about than I do myself, and I have no control over his wellbeing. After everything that’s happened today, I
can’t
lose him. I can’t even entertain the idea of that. We’ll make sure we save him … I promise.”

Larissa’s grief turned to rage in a flash and her eyes narrowed. “Forgive me if I don’t put much faith in one of
your
promises.”

“What’s
that
supposed to mean?”

“Do I need to spell it out? You’re a
liar
and a
cheat
. You talk about how much Flynn means to you, but you were happy to fuck around when he was just a baby.”

The little strength that remained in Rhys’ body left him. He pulled his hand away from Larissa’s shoulder and leaned his entire weight against the car again.

“I promised Flynn I’d rescue you.”

Stumped for a second, Larissa came back at him. “But that doesn’t mean you had to leave him with
her
.”

Like he could have done anything else. Rhys opened his mouth to reply, but Larissa didn’t give him a chance. Instead, she stepped forward and punched him on the front of his right shoulder.

“Why did you leave our boy with a
complete
stranger? You wonder why I fought you for custody of him? The first time you look after him in years and
this
is what happens! You’re a fucking liability.”

The lethargy of just seconds before left Rhys as adrenaline surged through him. He stood up straight, balled his fists, and pulled his shoulders back while he stared directly at her. His shoulder stung where she’d hit it.

Larissa didn’t back down, her scowl as fierce as ever.

With a clenched jaw and a raging pulse, Rhys stared at the woman he once loved. “So that was why you kept him away from me? And there I was thinking it was just you being a cunt.”

“I wasn’t the one who fucked someone else, Rhys.”

“Do we have to keep going back to that?”

“Yes, we do. If you could have kept it in your trousers, then we would be in a
very
different place by now.”

“So the zombie apocalypse has hit because
I
had an affair?”

“You know what I mean.” Larissa then turned her back on Rhys and looked out at the city.

With only the back of her head to look at, Rhys glanced down at the axe in the car. His heart rate increased as he stared at the savage weapon. To touch the thing would be to connect with Oscar more, but maybe he could use it just once. He could bury it into the back of Larissa’s skull and tell Flynn she never got away. A shake of his head banished the fantasy.

Rhys may have been many things but he wasn’t a cold-blooded murderer. Despite their dysfunctional relationship, she’d always be the mother of his child.

“I left Flynn with Vicky so I could come back into the city to rescue you. How many times do I have to tell you that?” Just the thought of it clawed at Rhys’ heart, but he said it anyway. “The first thing he said after I’d rescued him was ‘where’s Mummy?’ What else could I do? I love that boy, despite what you think, and I want to do everything I can to make him happy. Yeah, I fucked up, but that doesn’t mean I love him any less. I didn’t want to leave him but I couldn’t stand to see him so upset.”

Because she only had one shoe on, Larissa stood at an angle when she looked back at Rhys and folded her arms across her chest.

“So you would have left me to die?”

“That wasn’t a rhetorical question.”