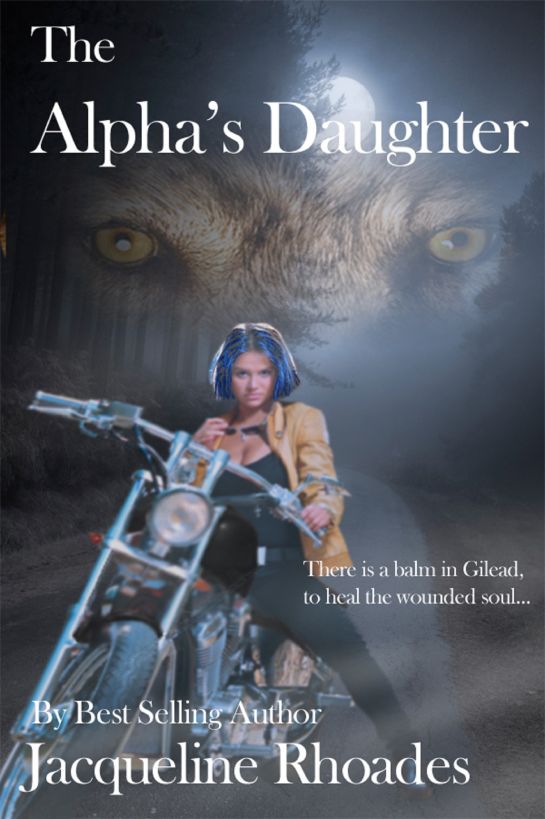 This ebook is licensed for your personal
enjoyment only. This ebook may not be re-sold or given away to
other people. If you would like to share this book with another
person, please purchase an additional copy for each recipient. If
you are reading this book and did not purchase it or it was not
purchased for your use only, then please return to Smashwords.com
and purchase your own copy. Thank you for respecting the hard work
of this author.

To my daughter, Carrie,

who wasn't surprised at all at my
success.

I'm so grateful you grew up to be my
friend.

There is a balm in Gilead,
to heal the wounded soul
…

Jazz Phillips is on the run, fleeing from a
fate most females in her pack accept as their lot in life; an
arranged mating, something Jazz thought wasn't in her future as the
Alpha's daughter and only child. She doesn't want to be the next
Alpha's Mate. She doesn't want to be anyone's mate. She likes her
life just the way it is until she finds herself stranded in the
mountain town of Gilead, home to a small and close knit pack of
wolvers. Once there, she begins to question her life as it was and
begins to wonder about what it could be, especially in the arms of
the wolver the people call Doc.

Doc Goodman claims to have settled in Gilead
because he saw a need for his services, but in fact, he's a
runaway, too. He's rejected his wolver heritage and the warring
politics that stripped him of everything he loved most. He's biding
his time, waiting to die, until he meets the blue haired, foul
mouthed beauty who shows him there are still things worth living
for and the most important of them are worth fighting for.

"…Country Roads, take me home. To the place I
belong…"

Jazz Phillips sang into the face shield of
her helmet. John Denver wasn't the kind of music she normally
listened to and she sure as hell didn't normally sing out loud.
This wasn't West Virginia, but the song was one of her mother's
favorites and her mother had been on her mind a lot lately. Her
mother was a baby when the song was a hit, yet she sang it all the
time. She said it made her remember where she came from and forget
the cruel brown desert that surrounded them.

Cruising down the highway, Jazz thought it
suited the scenery to either side of the road which was definitely
country. Even this early in spring, there was more green than Jazz
had seen in her entire life. What wasn't green was rock; high,
sheer walls of it and huge outcroppings like monster fists reaching
out over the treetops ready to pound the valleys below.

It was getting dark and she would have to
find a place to spend the night soon. She couldn't keep riding much
longer. Having travelled over a thousand miles, her ass was sore
and her leathers chafed and the damn helmet felt like it gained
another pound for every ten miles she covered. She was well beyond
familiar territory and she was tired.

The Victory beneath her purred. It was a good
motorcycle, a few years old and it handled well, but it was bigger
and heavier than she was used to and she didn't trust herself or
the bike on these back roads. She chose it because she could sneak
her clothes, a piece at a time, into the rear compartments while it
was in the shop for a tune-up. It was an eye-catching bike for a
woman to drive, but she was a wolver and as strong as many human
men. She'd been careful and changed the plates twice along the way.
She'd eaten at shopping malls so she could park it in an
inconspicuous corner of the lot.

At five-ten, in her leathers and helmet, she
hoped from a distance she'd be mistaken for a man. Up close, she
was shit out of luck. The leathers were too form-fitting to be
mistaken for anything but what she was.

She was far enough away now. No one here
would recognize her and no one from home would be looking for her
in this out-of-the-way place. No one from home knew this place
existed. These mountains were the perfect place to lay low and rest
up before she headed east to the places Eugene Begley said would
take her in.

The funny little man seemed to know what was
in the wind. He turned up out of the blue and showed no fear of her
father or any of the others. In his natty blue suit and sailboat
dotted tie, he'd walked through the clubhouse completely at ease,
his wing-tip shoes tap-tapping across the floor, nodding and
smiling at the leather and denim clad gathering. He was closeted
with her father for over an hour and came out smiling, but the
smile was gone when he found her in the local hangout that
night.

In spite of the crowd, he zeroed right in on
her sitting at her usual stool at Benny's Bar where she normally
held court. He was as out of place there as he was at the
clubhouse, but he was the only one who didn't seem to notice. He
smiled and nodded to everyone he passed as if he'd known them all
personally.

"Miss Phillips, might I buy you a drink and a
moment of your time?" he'd asked politely, ignoring the wave of
snickers that rippled through the watching crowd.

They were waiting for her to cut him off at
the knees, to laugh at him and tell him to take his fucking cutesy
tie and cologne smelling ass back to wherever they allowed little
fellas like him to live. Jazz almost did, but there was something
in his eyes that made her change her mind and not only accept his
offer of a drink, but lead him over to a corner table where they
could talk in private.

"Miss Phillips," he said again when they were
seated with their drinks. The table was sticky, but he ignored
that, too, and stared at Jazz with an intensity she found… well,
fucking creepy.

Jazz laughed and the sound echoed inside the
dome covering her head. Yeah, creepy, and it only got creepier.

Mr. Begley had nodded as if something had
been agreed between them and said, "One of my many services to the
wolver community is to serve as a matchmaker. I find mates, both
big M and small."

It was a reference any wolver would
understand. The term mate meant spouse. The Alpha's Mate was a
title.

"Your father has hired me to find a selection
of wolvers with Alpha potential, one of whom will become your Mate
and inherit the pack. He's planning to sell you off to the highest
bidder or should I say the most powerful one."

"You're shittin' me," Jazz had sputtered at
the little wolver. She was her father's daughter and since her
mother's passing Jazz was queen bee. Even when her father brought
Margie home, it was Jazz who ruled. Nobody was selling her off to
nobody. She'd have the pick of the litter when she was damn well
ready to pick which wasn't going to be any time soon, and if and
when she chose a mate, it wouldn't be to give the pack a new
Alpha.

"No, Missy, I ain't shittin' you," Mr. Begley
said, his voice reverting to a down home drawl. "Your Daddy has
made his plans and he expects you'll take what's offered. He says
it's time you settled down and did your duty, him havin' no son and
all."

Jazz had stared at the man. He was crazy,
certifiable, and yet tiny tendrils of impending doom spread up
along her spine. Margie had tried to warn her, too. Her father
never hid his disappointment that she was a girl, but she couldn't
believe he would take it this far.

Mr. Begley had his pen out and was busy
jotting notes on a napkin he'd pulled from an inside pocket. He
stopped, looked to the ceiling, nodded and continued writing. With
a final flourish, he finished his notes and returned the pen to the
pocket from which he extracted the napkin. He then pushed the
napkin across the table.

"When you figure out I ain't lying to you,
child, you're going to need that. That's the route you take. I
marked where it'll be safe for you to hole up and rest. They ain't
fancy, but they’ll give you what you need."

Leave this place where her father ruled
supreme and she lived as she chose? Jazz almost threw that napkin
away. Thank God she didn't because a week later, dear Daddy broke
the news and he said exactly what Mr. Begley said he would.

"I'm tired of waiting for you to get your
fucking head outta your ass, girl." Her father always called her
girl and a younger Jazz once thought he'd forgotten her name, but
now heard it as an accusation. "It's time to grow up and do your
duty. I don't got time to find another woman to bear me a son and I
won't be giving everything I've built to some no-account you fell
in love with." He'd sneered the word love as if it was some stupid
idea like the time she'd painted her room orange.

It wasn't her fault her stepmother couldn't
get pregnant and sometimes Jazz thought, but never said, that it
was the old man who was the problem. He was no kid when she was
born and drugs, booze and sticking it to anything in a skirt from
the time her mother died to the time he found Margie had probably
finished off what little he once had.

She'd argued, but her father wouldn't listen.
He was bound and determined to have his way.

"You're a grown woman and it's time you
settled down and did what woman was meant to do. My mind's made up.
You'll do as you're told or I'll make you do it," he'd
threatened.

And that was when Jazz made her mistake. "You
can't make me do anything!" she'd snarled.

Jazz had seen what her father's temper could
do, but she had never been its victim. His rages were legend, but
she had thought she was immune. She wasn't.

"You'll do as you're told." By the time the
Alpha had finished with her, she might have.

Her life changed that night. She went from
princess to prisoner. He locked up her bike and had her watched to
make sure she didn't try to run. Her money was gone, even the money
her mother put away for her when she was a child.

She'd crawled away from the beating, no
argument left, but three days later when the worst was over and she
could move somewhat normally again, she came to a terrifying
decision. She wouldn't run away this time knowing someone would
bring her back and let her have her way. This time, she would leave
for good.