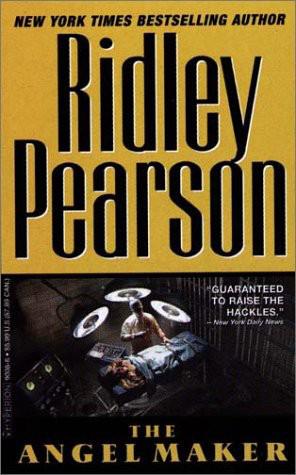 Potent blend of medical thriller and police procedural that resurrects the cop-hero of Pearson's Undercurrents (1988) and pits him against--of all things--a maniacal veterinarian. Lou Boldt has been off the Seattle force for two years, tending his infant son and playing jazz piano at a local dive, but his extraordinary empathy for murder victims won't let him refuse the request of police shrink and ex-lover Daphne Matthews (whose throat was slashed in Undercurrents) to help with her new case--a series of street kids found dead and missing a kidney, liver, or lung. Immediately suspecting that a transplant surgeon is "harvesting" the organs and selling them at great profit, Boldt rejoins the SPD and pushes for advice from the medical examiner. The narrative bristles with the sort of forensic detail that informed Undercurrents. Meanwhile, Pearson bares his villain- - sociopathic society vet Elden Tegg--as we see him snatching social-worker Sharon Shaffer with an eye to selling her heart to a mobster whose wife is dying from heart disease. Unlike Undercurrents, then, where suspense derived from "whodunit," the tension here is strictly--and tightly--time-wound: Can Boldt i.d. the killer and rescue Sharon--or can Sharon herself escape from the remote dog kennel where Tegg's imprisoned her, naked and terrified- -before the vet wields his scalpel? Thriller fans will note that this setup strongly echoes Thomas Harris's The Silence of the Lambs--but Pearson matches Harris's pace as the hours tick down, marking off twists (a hiker chancing on the kennel) and hot suspense sequences (a pawnshop sting to break into Tegg's computer) until the cathartic, brutal climax. Exceptionally gripping and full of amazing forensic lore (e.g., that Band-Aids emit low-level radioactivity from being sterilized): a top-flight offering from an author who's clearly found his groove.

TO BE AN EVEN HARDER BOOK TO FORGET...SMOOTH, STATE-OF-THE-ART

INVESTIGATION TECHNIQUES AND CHARACTERS WE CARE ABOUT." Stephen King

PRAISE FOR RIDLEY PEARSON "One hell of a writer!"

"IF YOU LOVE TO SLEEP, FORGET THE ANGEL MAKER. Don't even peek at Ridley Pearson's new thriller. Once you start reading, you won't be able to stop ... A compelling story of a nightmare subject."

"The Pearson trademarks are here: meticulous attention to forensic detail, tightly written scenes where every word is calculated to give you the creeps, and a careful buildup of evidence ... In Pearson's gripping style, this unconscionable story is completely plausible." Seattle Times

exceptionally gripping and full of amazing forensic lore ... a top-flight offering from an author who's clearly found his groove."

BLOOD OF THE ALBATROSS

THE SEIZING OF YANKEE GREEN MALL

No part of this book may be reproduced or transmitted in any form or by any means, electronic or mechanical, including photocopying, recording, or by any information storage and retrieval system, without the written permission of the Publisher, except where permitted by law. For information address: Delacorte Press, New York, New York The trademark Dell" is registered in the U.S. Patent and Trademark Office.

Again, for Colleen. You keep me in stitches.

I am a sort of phantom in life who has lost all beginning and end, and who has even forgotten his own name.

The original story that inspired The Angel Maker was told to me by Tona Backman on an autumnal evening in Hamstead, England. I owe a huge debt of thanks to her and to Clarence Stilwill.

I would also like to acknowledge the help and assistance of a variety of experts who educated and guided me through the maze of organ transplantation and criminal investigation, including but not limited to: Frances Campbell, psychotherapist; Dr.

Also thanks to: The Fulbright Commission; Wadham College, Oxford- , England; and to Sue-Todd and Chuck Yates, Mino Tomacelli and the gang at Kailuum, Michael Lewis, and all The Rockbottom Remainders.

The young woman's pale, lifeless expression cried out to Daphne Matthews from across the room. Nearly all of the kids who sought out The Shelter were high on something. The hollow cheeks and dirty hair were common to all the runaways, as were the torn jeans, the soiled T-shirts, and the disturbing smell.

The windowless basement room in the King Center Baptist Church on South Jackson held thirteen beds and was void of any color except for the odd assortment of unframed art posters. The beds, arranged in perfect rows, were each covered with a gray wool blanket atop which had been placed a white towel and a dull green cardboard box containing a toothbrush, comb, bar of soap, a package of condoms, and a leaflet on AIDS.

The boys' dorm, across the hall and next to the room where the choir robes were kept, held only eight beds, because teenage boys were less likely to seek help from such places and because girls between the ages of thirteen and eighteen accounted for a larger percentage of the runaways who wandered Seattle's streets.

The other volunteers at The Shelter welcomed Daphne's expertise as a psychologist as much as her being a member of the Seattle Police Department, though this latter qualification was rarely called upon and never mentioned in front of the girls. For Daphne, each young woman who passed through The Shelter's door represented a challenge, each had her own unique, often terrifying story. By coming here they called out for help.

Diseased. The job of each volunteer was to reverse all of that, to connect the runaway with counselors, doctors, halfway houses, government funds, jobs, housing, recovery programs and safety. To rescue and rebuild a life.

Daphne sat down quietly and slowly on the bed opposite the girl and forced a welcoming smile that made her feel cheap and dishonest: There was nothing to smile about here. She noticed a tiny scab on 'the inside of the girl's elbow joint and felt her heart sink. To her relief, she didn't see any other needle marks. Perhaps this was the girl's first time. With any luck, her last.. The girl never looked at her; she just stared off into the room in a catatonic daze.

Daphne suggested gently, "Would you like to lie down?"

The girl nodded slightly. Daphne moved aside the towel and box and supported her head as it traveled to the pillow. Some of the drunks felt this hot, some of the druggies, but this contact gave Daphne a sickening feeling in her stomach that told her this was something worse. Exactly what, she wasn't sure. She wasn't even sure she wanted to find out.

The girl cried out sharply as she leaned back, clutching her side.

Daphne cleared the tangled hair from her face, wincing as she noticed a pink circle on the girl's temple. Without looking, she knew there would be an identical mark opposite this: electroshock.

"Cold," the girl complained in a dry, raspy voice. Daphne covered her with a blanket, told her she would "be right back,"

and hurried over to Sharon Shaffer, who had just arrived.

Sharon, a remarkably petite woman with large gray eyes and an oversized mouth, a former graduate of The Shelter, was now its spokesperson, working the circuit of Rotary Clubs and ladies'

luncheons in fund-raising efforts. To both the volunteers and the community, she was a symbol of everything right about The Shelter, its leader and patron saint. To Daphne, she was a dear friend.

Daphne asked one of the other volunteers to check the hospitals for a psych ward discharge or escapee. She briefed Sharon on the recent arrival as the two of them crossed the room: the needle mark, the evidence of electroshock therapy, the girl clutching her side. "Are you thinking restraints?" Sharon asked. She had a way of reading Daphne's thoughts. Before Daphne could answer, Sharon said, "Let's hold off on that, okay? There's nothing more frustrating than a tie-down. It's horrible. I've been there." Daphne didn't argue. Reaching the girl, they perched themselves on opposite sides of her bed.

"Where am I?" the girl wondered aloud. "Why am I here?" "The only requirement for being here," Sharon explained in a comforting voice, "is your desire to be off the streets." She hesitated. "Okay?"

The girl squinted painfully. It hurt Daphne to see that kind of pain-psychological or physical?-and it worried her too: The druggies usually felt nothing. Again, the combination of electroshock and that needle mark warned Daphne of an institution. Her policewoman instincts kicked in-this girl could turn violent without warning.

Sharon said calmly, "You're safe now. My name is Sharon. I'm a runaway. This is Daphne. We're all women here. Okay? We can keep you warm. We can feed you. We want nothing from you.

Nothing at all." The girl began to cry. "We are not going to notify the police or your parents-you're home. You're safe here. Whatever you have done is behind you. Here, you are safe.

If you need medical attention, you will have it. We want nothing more of you than your name. Something to call you. A first name is all. Can you tell us your name?"

"Cindy," the girl answered. "Can't you stop them?" she asked desperately.

Sharon repeated, "You're safe here, Cindy." She reached out and took the girl's limp hand.

The girl attempted to sit up. She cried out painfully, once again clutching her abdomen, and then shielded her ears. "Can't you stop them?" she pleaded.

The blanket fell away from her. A wet bloodstain colored her side. A stabbing? Daphne wondered. How had she missed the wound earlier? The girl pleaded, "Do you hear that barking? Can't you stop that barking?"

Daphne reached out and lifted the girl's shirt. Her skin was colored an iodine-brown from surgery. At the center of this stain was a three-inch incision laced with broken stitches. It was so fresh, it had yet to scab. She was losing an enormous amount of blood. "Call 911!" Sharon shouted across the room.

"We need an ambulance, pronto!" She caught eyes with Daphne then and whispered, "What the hell is this?"

Daphne's fingers gripped the handle, but she couldn't quite bring herself to open the door. From inside the nightclub came the muted melody of his jazz piano. She had carefully avoided coming to The Big joke because new lives came at a price, and that price was distance. Two years had passed since that evening spent with him. A single evening, a single event long since over, but her nearly tactile memory of it remained. She had her feet firmly on the ground now; and he had a family. Why challenge any of that? She answered herself: She needed the best cop available; she needed Lou Boldt, retired or not.

A car pulled up. A young couple climbed out and approached. She had to make up her mind-turn back or go through with it. There were other people to whom she could turn. Not as good as Boldt, but certainly qualified.

To hell with it! She went inside. A short, stocky doorman with no head hair but a mustache waxed like an airplane propeller requested a two-dollar cover charge for the piano player. The piano player, she thought. The sergeant, she felt like correcting. The most celebrated cop in this city to ever walk away from the job-so important to Homicide that his departure was still technically termed an extended leave. She intended to play upon that fact. She handed the doorman the money. Cheap, at twice the price.