The Angel & the Brown-eyed Boy 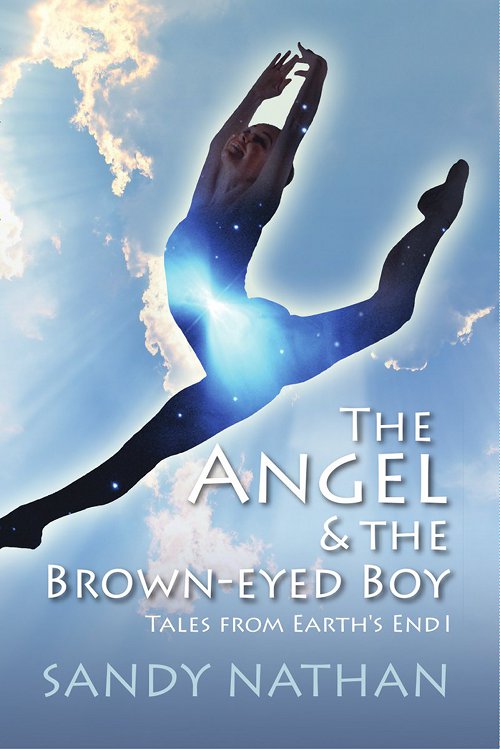 The Angel & the Brown-eyed Boy
reminds me of the group of special books and films that include
1984
,
A Brave New World
,
Brazil
, and
The Prisoner
mini-series. We come away from reading
The Angel
with determination to fight for our individuality, creativity and goodness, and to be ever watchful of authority. This excellent science fiction / fantasy novel left me wanting more.

Captivating from the first page onward, this entertaining tale will draw readers in and keep them riveted. Highly recommended.

Characters you’ll want to hang out with—where does Sandy Nathan find these people? They live, they breathe. You love ’em. You hate ’em. And, you care about them. That’s what makes their story so engaging.

Where does she come up with these ideas? It’s the end of the world. Or is it? Okay, it is. Well, it looks like it is. And who are those golden people from some other planet?

I guess we’ll just have to wait for the second book in the series. Hopefully Sandy is writing fast.

A good book elicits an emotional response while being read; Nathan’s book haunts the reader long after the final page is turned. In
The Angel & the Brown-Eyed Boy
, two dying worlds fight for survival, their futures dependent on a revolutionary and an angelic otherworldly dancer. It is a world not that many heartbeats away from our own, making the premise chilling. This future world is dark and disturbing, a pre-apocalyptic malaise covering the earth similar to the movie
Children of Men
. Is there hope? Yes, Jeremy and Eliana are the key. But to what end? Future volumes of the tale will tell.

— Todd A. Fonseca, award-winning author of
The Time Cavern

Tecolote: The Little Horse That Could

A Division of Vilasa Properties LLC

All rights reserved. No part of this book may be reproduced or transmitted in any form or by any means, electronic or mechanical, without written permission from the author, except for the inclusion of brief quotations in a review.

Publisher’s note: The scanning, uploading and distribution of this book via the Internet or via any other means without the permission of the publisher is illegal and punishable by law. Please purchase only authorized electronic editions, and do not participate in or encourage electronic piracy of copyrighted materials. Your support of the author’s rights is appreciated.

To my brother, David Oddstad

W
hen the girl appeared on the sidewalk, the edges of her body and clothing were fuzzy, as though all of her hadn’t arrived. She looked up and down the street, the way a person would if she’d forgotten an address or lost her way.

Her hair was frizzed and matted, sticking out akimbo. She was thin, had a dirty face, and wore a scratchy coat that was far too big. Its sleeves were rounded little capes; her arms stuck out of them like chopsticks protruding from a napkin. The coat slipped off her shoulders, first to one side, then the other. She hitched it up and kept walking. When she walked, the coat opened to reveal her feet and lower legs.

Her thin socks, trimmed with grayed lace, were pulled up to make a ruffle below her knees. Pink satin laces held up the socks, their Xs snaking up her shins from her shoes. She looked pretty much like everyone she saw, except for her shoes. Long pink ballet slippers stuck out from beneath her coat, as improbable as roses sprouting from the cement.

Eliana made her way along the sidewalk, knowing that she was dirty, feeling the grit in her hair and on her skin. When she had reached the planet’s atmosphere, clothes and all sorts of things had rushed at her with great force, tossing her over and over. Dirt had come, too. She’d
found the clothes she needed and put them on the way her teachers had shown her. Then her people had put her where she was.

Humans passed, but no one stopped or said anything to her. A paper blew against her leg. More dirty papers blew and piled up everywhere. Streaked and grimy buildings rose near her. Writing in different colors covered their walls. She looked carefully, but couldn’t make out the words. She’d learned to read and write English, but those words mystified her.

“Yes?” She spoke to a human for the first time, politely bowing. The human was dirty like Eliana, with torn clothes and matted hair. She couldn’t tell if it was a he or a she.

“Get out of here!” the ragged person shouted. “You don’t belong here.” Eliana cowered, but the stranger rushed past her, clawing at something Eliana couldn’t see. “Stay away,” the human said, and then stood with feet braced, shouting, “Get out of here, all of you. Stay away!” The creature hadn’t seen Eliana at all.

The girl realized that her people were right; they had put her where no one would notice her. Now she needed to tell them that she had arrived. She raised one foot, turning it gracefully and resting it easily on the other knee. She flicked the shoe with her finger, listening. A trill of clear notes deep within her brought the hint of a smile. She held the coat closed and stood still. She was where she was supposed to be. It had begun.

She fingered the piece of paper in her pocket. Her map. Beneath it, in the pocket’s depths, was the notebook. What was written on it would get her where she needed to go. She had all she needed.

She walked a long way along the hard path. More humans passed her. To her left, gray, inert structures rose high in the sky, blocking the sun. She touched the see-through parts of their lower levels, looking at the humans inside. They looked at each other with darting eyes, speaking rapidly. Everyone outside rushed frantically, noticing nothing. They didn’t see her, just as her people had said.