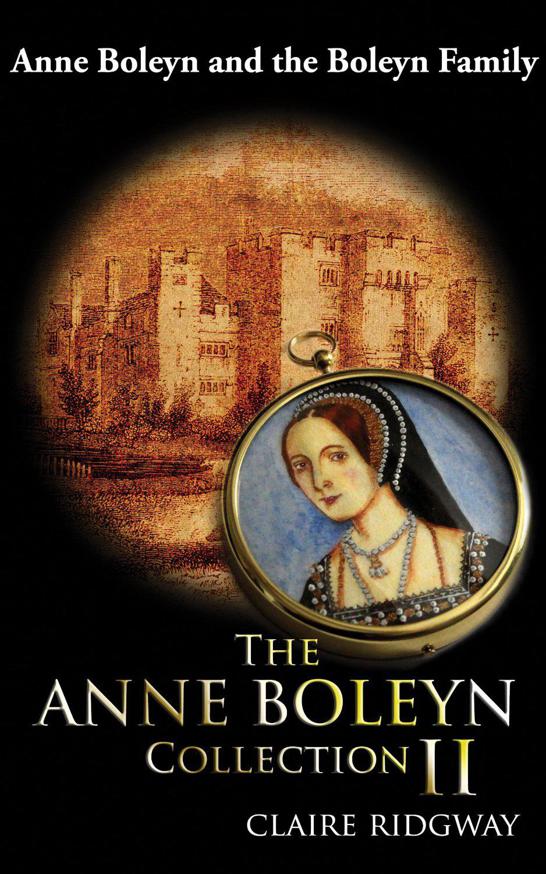 All rights reserved. No part of this publication may be reproduced, stored in a retrieval system, or transmitted, in any form or by any means, electronic, mechanical, photocopying, recording or otherwise, except as permitted by the UK Copyright, Designs and Patents Act 1988, without the prior permission of the publisher.

For more information on

In memory of Eric Ives (1931-2012) whose passion for Anne Boleyn was contagious.

"If any person will meddle with my cause, I require them to judge the best."

This book is the result of over four years of research and hard work, but it would never have been published had I not received the ongoing support and encouragement of the following people:

Tim Ridgway – My husband, my publisher and the techie guy who keeps The Anne Boleyn Files website online.

Clare Cherry – A fellow history researcher who has become a valued friend.

Leanda de Lisle – A wonderful historian who inspires me and encourages me.

Dawn Hatswell – An Anne Boleyn Files visitor who has become a true friend.

Roland Hui – For the use of his beautiful miniature of Anne Boleyn for the front cover of this book.

The online Tudor community – The historians, bloggers, Facebook pages and Anne Boleyn Files visitors who debate with me, encourage me, give me feedback and who prove that I'm not alone in my Tudor fascination.

Sarah Franklyn – The editor who catches all the typos and who turns my sentences round so that they actually make sense.

Thanks also to Teri Fitzgerald, Olivia Peyton and Gareth Russell. 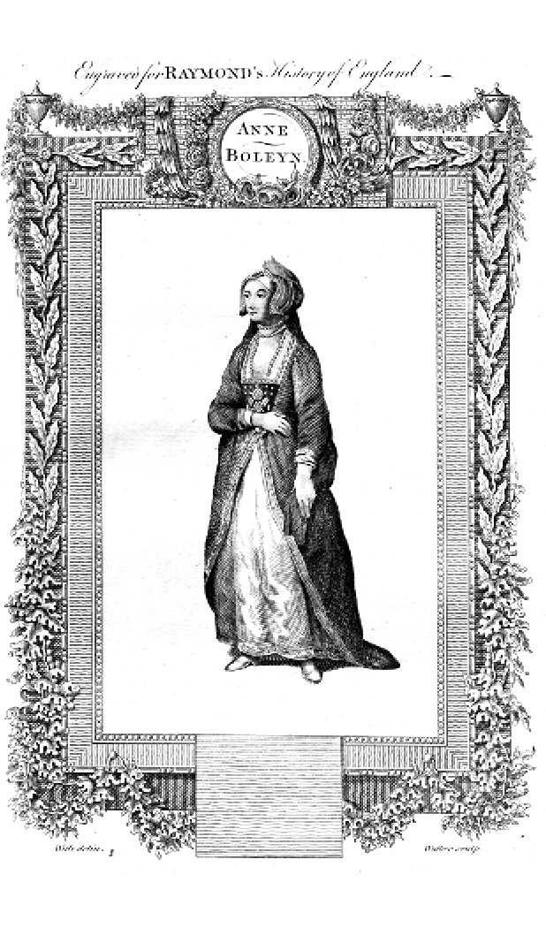 1. The Origins of the Boleyn Family

4. Anne Boleyn, the Court of Margaret of Austria and the French Court

5. Did Anne Boleyn actually go to Mechelen and France?

15. Anne Boleyn and the Charge of Witchcraft

18. Anne Boleyn and the Tower of London

23. The Boleyns and Religion

My journey into the world of the Boleyns began in January 2009 when I started researching the life of Anne Boleyn. I decided to blog about my research, never dreaming that anyone would read my ramblings, but by summer 2009 I had built up a regular following. I took the step to give up my freelance-writing business and, instead, work full-time on my history research and writing; I've never regretted it. I spend my days, and most weekends, surrounded by books and documents, but history is my passion and I feel blessed to be able to dedicate myself to its study.

I published my first book,
The Anne Boleyn Collection
, in February 2012 and was thrilled with the response. It was an unusual book in that it was a collection of articles, rather than a normal history book, and it was also written in a chatty style. I wasn't sure how it would be received, but emails and reviews that said that reading my book was like having a coffee with me and chatting about history proved that readers 'got' what I was trying to do. My aims have always been to get to the truth (or as near to it as possible), to debunk the myths and 'accepted truths' by using primary sources, to challenge perceptions based on fiction, and to share my findings in an understandable way. Much of what I find is open to interpretation and up for debate, but that is what is exciting about history; it's not dead, it's living and breathing. I learn so much by sharing my research and my opinions, and then entering into a debate with visitors to The Anne Boleyn Files. There's nothing better than bouncing ideas off each other.

The Anne Boleyn Collection II
is a second volume of articles, but this time they're not just off the website, many of them are previously unpublished pieces based on talks I've done and research I've carried out on Anne Boleyn and the Boleyn family. I've included full references and a bibliography so that you can check the sources for yourself and come to your own conclusion. I am always happy to discuss my research, so please feel free to contact me at [email protected], or to comment at
www.theanneboleynfiles.com
or on The Anne Boleyn Files Facebook page –
https://www.facebook.com/theanneboleynfiles
.

1.
The Origins of the Boleyn Family

Genealogists, historians and researchers have been discussing Anne Boleyn's roots for centuries and today there still does not seem to be a complete agreement over the origins of the Boleyn family. I am no genealogy expert, but I've been researching the Boleyns full time since early 2009. This chapter is a presentation of my findings and a discussion of the various theories.

In his 19th century biography of Anne Boleyn, Paul Friedmann accused Anne Boleyn of fabricating her family tree in December 1530:

"Anne became daily more overbearing. The latest Anne's exploit in her honour had been the fabrication of the wonderful pedigree, in which good Sir William Bullen the mercer was represented as the descendant of a Norman knight. Though these pretensions were laughed at, and though Anne's aunt the duchess freely told her what they were worth, she was nowise abashed."
1

This accusation was based on a letter written by Eustace Chapuys, the imperial ambassador, in which he reported the Duchess of Norfolk scoffing at Anne Boleyn's family tree.
2
However, no details of this family tree were given, and Chapuys is the only source for this claim. We also know that Elizabeth Howard, Duchess of Norfolk, was no friend of Anne's at this time so she may well have made fun of anything that her niece did. There were plenty of reasons for the Duchess to dislike Anne and her rise at court:

It is little wonder that "by Christmas 1530 the duchess's Stafford blood could not resist some acid comments on the upstart Boleyns."
8

But perhaps we should take Chapuys' words with a healthy pinch of salt. Chapuys saw Anne as the King's "concubine" and did not like her; his loyalty lay with Catherine of Aragon. Also, in his report, Chapuys says "Lon ma dict que la duchesse…", i.e. "Someone told me that the duchess…", so this was second hand information.

We don't know exactly what was on the family tree mentioned by Chapuys, nor who was responsible for it, but many believe that the Boleyns did in fact originate in France. Joanna Denny wrote of the Boleyns as "an upwardly mobile family originating from the English-held territories in France",
9
noting that "Baldwin de Bolon came from Boulogne, which in the Chronicles of Calais is spelt 'Boleyn'." In the 17th century, Julien Brodeau wrote:

Here, Brodeau is saying that the Boleyns were an ancient family from France and that there was a Walter de Boulen who held land in Peronne, in the Picardie region of northern France, in 1344. He went on to say that the family were linked, by marriage, to the family of "Moulin, Seigneurs de Fontenay en Brie". Hence the links with Brie, or Briis-sous-Forges, where a tower called the Tour d'Anne Boleyn still stands today.

Friedmann, however, was sceptical of the Boleyns' links to France, calling the idea "fantastic" and writing that "all that is really known of Anne's origin is that her great-grandfather, Geoffrey Boleyn, was a wealthy London merchant. He was elected alderman, and in due time arrived at knighthood and the dignity of Lord Mayor." But in my reading and research on the Boleyns, I have found that most historians and genealogists
do
believe that the Boleyns had their origins in France, with some believing that they were descended from the Norman Counts of Boulogne and others believing that they came over later as merchants.

Those who believe that the Boleyns descended from the Counts of Boulogne say that the Counts came over in the 11th century with the Norman invasion and settled in Martock, Somerset, and parts of Surrey.
11
It is alleged that Simon de Boleyne (or de Boulogne) then moved to Norfolk: records show that he held lands in the Salle area in the mid 13th century. Salle is, of course, just a few miles from Blickling, where it is thought that Anne Boleyn was born. Furthermore, St Peter and St Paul Church, in Salle, is the resting place of Geoffrey Boleyn (d.1440) and his wife, Alice, Anne's great-great grandparents.

Having the Rancher's Baby by Cathy McDavid
The Price of Discovery by Leslie Dicken
Hex by Allen Steele
Traveling Light by Andrea Thalasinos
Ginny by M.C. Beaton
The Countess by Rebecca Johns
Kev by Mark A Labbe
Deathly Contagious by Emily Goodwin
Half Wolf (Alpha Underground Book 1) by Aimee Easterling
Full Steam Ahead by Karen Witemeyer
Our partner