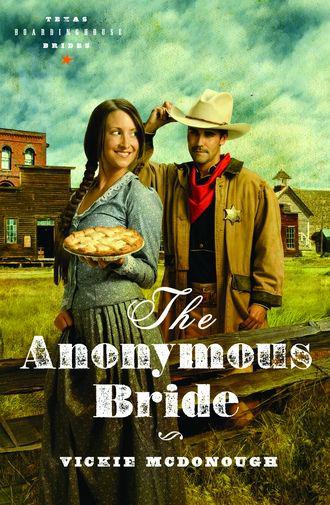 This book is dedicated to my editor, Rebecca Germany, my copyeditor, Becky Fish, and the wonderful staff at Barbour. Thank you for believing in me as a writer and giving me the opportunity to tell the stories of my heart.
You all are the greatest to work with.

Whoso findeth a wife findeth a good thing, and obtaineth favour of the LORD.
PROVERBS 18:22 KJV

Sometimes God asked difficult things of a man, and for Luke Davis, what he was fixing to do was the hardest task ever.

Luke reined his horse to a halt atop the ridge and gazed down at the town half a mile away. Lookout, Texas—the place where his dreams had been birthed and later had died. He wasn’t ready to return, to face the two people he’d tried so hard to forget.

“I’d rather face a band of Sioux warriors, Lord, than to ride into that town again.” He sighed and rubbed the back of his neck.

Alamo, his black gelding, snorted, as if sensing they’d reached the end of their long journey. Luke directed his horse down the path to the small river that ran south and west of the town. A healthy dose of spring rain had filled the crater dug out by past floods where the river made a sharp turn. Local kids used it for a swimming hole, and a new rope had been added for them to swing on. Memories of afternoons spent there were some of Luke’s favorite, but those carefree days were over.

He glanced heavenward at the brilliant blue sky, halfway hoping God would give him leave to ride away. When no such reprieve came, he dismounted at the water’s edge and allowed his horse to drink while he rinsed three days’ worth of dust off his face.

Alamo suddenly jerked his head up and flicked his ears forward. The horse backed away from the bank and turned, looking off to the right. Luke scooped up a handful of water and sipped it, watching to see what had stirred up his horse. Tall trees lined the life-giving river, and thigh-high grasses and shrubs made good hiding places. He knew that for a fact. How many times as a boy had he and his two cousins hidden there, watching the older kids swimming and sometimes spooning?

“Must have been some critter, ’Mo.” He stood and patted his horse, finally ready to ride into Lookout and see up close how much the town had changed. How she’d changed.

Three heads popped up from behind a nearby bush. “Hey, mister,” a skinny kid yelled, “that’s our swimming hole, not a horse trough.”

Rocks flew toward Luke, and he ducked, turning his back to the kids. Alamo squealed and sidestepped into Luke, sending him flying straight into the river. Hoots of laughter rose up behind him as cool water gushed into his boots and soaked his clothing. His soles slipped on the moss-covered rocks as he scrambled for a foothold.

“Foolish kids.” He trudged out of the river, dripping from every inch of his clothing. His socks sloshed in his water-logged boots. Dropping to the bank, he yanked them off, dumped the water, and wrung out his socks. With his boots back on, he checked Alamo, making sure the horse wasn’t injured; then he mounted, determined to find those kids and teach them a lesson. Playing childish pranks was one thing. He’d done his share of them. But throwing rocks at an animal was something else altogether.

“Heyah!” Alamo lurched forward. Luke hunkered low against the horse’s neck until he cleared the tree line. He sat up, scanning the rolling hills. He didn’t see any movement at first, but when he topped the closest hill, he found the rowdy trio racing for the edge of town. Luke hunched down and let his horse out in a full canter, quickly closing the distance between him and the kids.

All three glanced back, no longer ornery but scared. He’d never harm a child, but instilling a little fear for the law couldn’t hurt anything.

The two tallest boys veered off to the left, outpacing the smaller kid. The boy stumbled and fell, bounced up, and shot for town. Luke aimed for that one as the older boys dashed behind the nearest house. The youngster pressed down his big floppy hat and pumped his short legs as fast as he could. The gap narrowed. Slowing Alamo, Luke leaned sideways and reached down, grabbing the youth by his overall straps. The child kicked his feet and flailed his arms, but Luke was stronger, quicker. He slung the kid across his lap.

“Let me go! I ain’t done nothin’.” The boy held his hat on with one hand and pushed against Luke’s leg with the other hand. “You’re gettin’ me wet.”

“Just lie still. And I wouldn’t be wet if you hadn’t thrown rocks at my horse.” Luke held a firm hand on the kid’s backside, but the boy still squirmed, trying to get free. “Don’t make me tie you up.”

Suddenly, he stilled. “You wouldn’t.”

“Whoa, ’Mo.” Luke calmed his horse, fidgety from the child’s activity. Alamo had carried him through all kinds of weather, fights with Indians in the Dakotas, and chasing down train robbers, but one skinny kid had him all riled up.

“My ma ain’t gonna like you doin’ this to me, mister.”

Luke grunted, knowing the kid was probably right—but then his mama should have taught him not to throw rocks at strangers. The next man might shoot back.

Being sopping wet with a cocky kid tossed across his lap certainly wasn’t the homecoming he’d planned.

Luke scanned Main Street as he rode in, noting the changes made over the past decade. Most of the buildings on this end of town, with the exception of the saloon, sported fresh coats of paint. The town hadn’t grown nearly as much as he’d expected it would in the eleven years he’d been gone. With the new street that had been added after he left, the town roughly resembled a capital E: Bluebonnet Lane was the spine; and Main, Apple, and the new street served as the three arms.

Almost against his will, Luke’s gaze turned toward the three-story Hamilton House that filled the end of Main Street. The house, no longer white with black accents, had been painted a soft green and trimmed with white. Rachel’s influence, no doubt. If he kept going, he’d ride right up to her front door.

How much had she changed? Did she and James have a passel of children? A sharp pain stabbed his chest. They should have been his and Rachel’s children, but the woman he’d loved had betrayed him. Married someone else—the town’s wealthiest bachelor.

He shook his head.
Stop! You’re here to put the past behind you. Once and for all.

He couldn’t allow himself to think about how Rachel had hurt him. He had to find a way to forgive her so he could move on, find a wife he could love, and start a family. Pushing thirty, he wasn’t getting any younger. And why did returning home make him more nervous than he’d been the day he joined the cavalry a decade ago?

The boy he’d captured found new strength and bucked several more times. “My ma will take her broomstick to you, and I’m gonna laugh when she does.”

Luke chuckled and shook his head. This kid needed his rear end tanned good, or maybe, beings as Luke was soon to be the town marshal, he should just lock the boy in jail for a few hours. That ought to scare him straight for a day or two.

A man exited the saloon, drawing Luke’s attention to his right. The Wet Your Whistle had been enlarged and sported a fancy new sign in bright colors, which looked out of place against the weathered wood of the building. To his left, the livery looked to be well cared for. Was Sam still the owner? Or had his son taken over?

He rode past Polly’s Café. The fragrant scents emanating out the open door reminded him that he hadn’t eaten since his skimpy breakfast of coffee and a dried biscuit, leftover from dinner the night before. Maybe his cousins would join him for their noontime meal if they hadn’t already eaten. ’Course, he had an issue of business to attend to before he could think of food.

Dolly, twin sister to Polly, evidently still owned the dressmaker’s shop directly across from the café. The spinster had painted the small structure a ghastly pinkish-purple more suited to a saloon gal’s dress. He almost felt sorry for the old building until he remembered that it sat next door to his cousins’ freight office and they’d have to stare at it every day. He grinned. Served those rascals right.

He hauled the youngster up, slung him over his shoulder, then dismounted and tied Alamo to the hitching post outside of the Corbett Freight Office. A man and woman he didn’t recognize approached on the boardwalk in front of the building. They gave him a quick glance, eyeing the child on his shoulder and his wet clothing. The man grinned and nodded, and they passed by, but the woman puckered up as if she’d sucked a lemon too long.

“None of your business.” The boy kicked again and pounded on Luke’s back. “Let me down, mister, ’fore I spew my breakfast all over your backside.”

Luke chuckled and resisted smacking the boy’s rear end. The kid had spunk; he’d give him that much.

“Ma! Ma! Help me!” The boy started bucking like a mule in a nest of rattlers.

A woman across the street halted and looked up, eyes wide. Her hand flew to her chest. She hiked her skirts and bounded down the boardwalk steps like a she-bear on attack. She quickly marched across the dirt street and stomped up the steps toward Luke. Her bonnet shielded her face, but for a woman with a child, she had a pleasing figure with curves in all the right places.

Luke lowered the kid but held on to the twisting boy’s shoulders.

Luke shook his head. “That’s not the way of things, ma’am.”

“Please let go of my daughter.” The woman lifted her head and glared at him from under her sunbonnet.

Daughter? How had he missed that?

He glanced down at the kid again. The floppy hat hid the kid’s hair and covered half her face. He yanked it off, and a matching set of auburn braids fell down against the girl’s chest.

“Hey! That’s my hat.” She grabbed at it, but he held it high out of her reach.