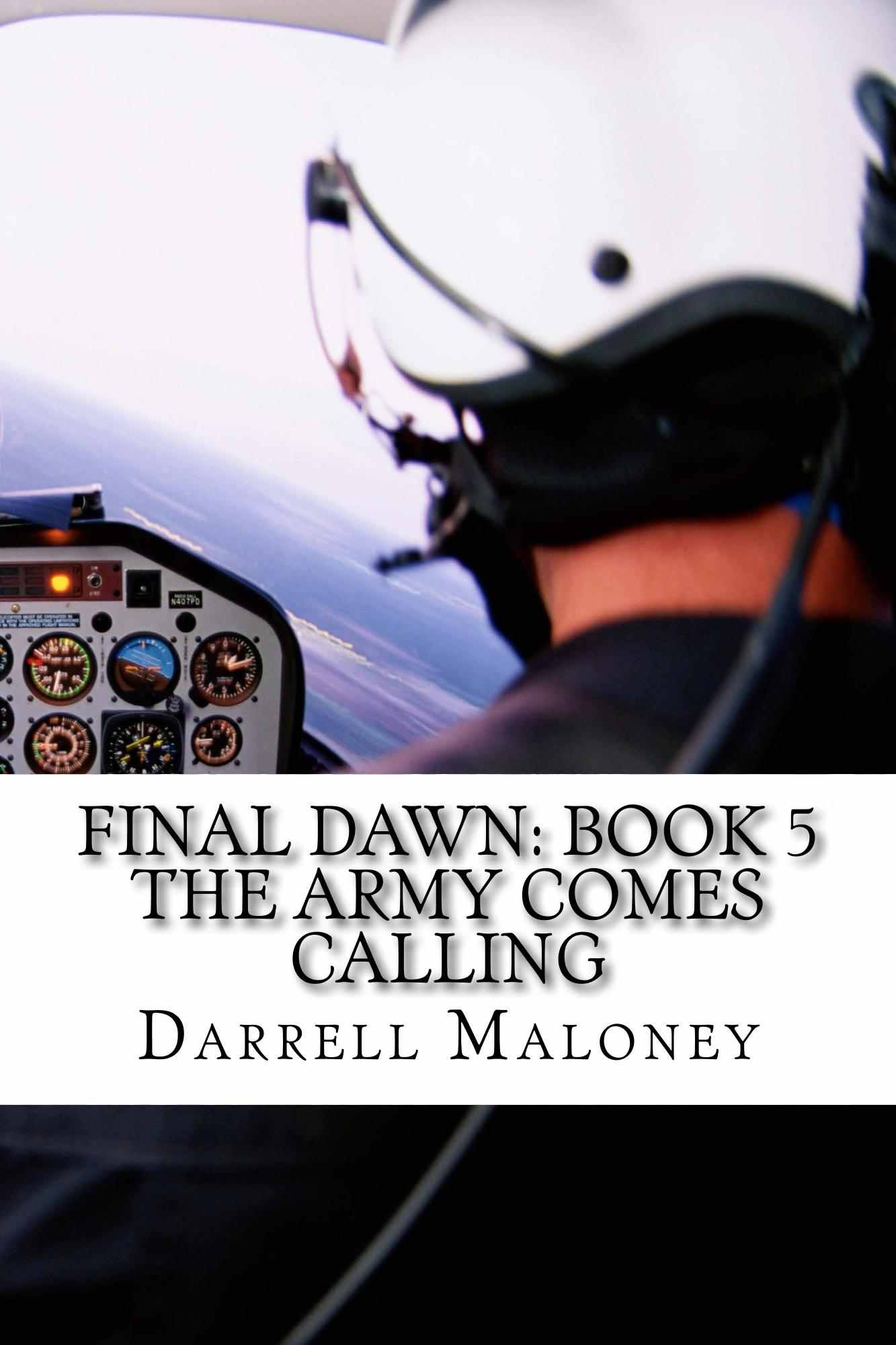 This is a work of fiction. All persons depicted in this book are fictional characters. Any resemblance to any real person, living or dead, is purely coincidental. Copyright 2014 by Darrell Maloney

A brief recap of
The Siege,

the fourth book in the
Final Dawn
series

The group of forty one had adjusted well. After seven long years of taking refuge deep in the bowels of the earth they’d been able to emerge and begin again.

All their hard work and all their planning prior to the meteorite’s impact had left them with many rewards. Chief among them were the livestock they’d been able to raise in the old salt mine. And the seeds Karen was able to grow in her tiny greenhouse.

They were looking ahead to a future full of promise. The world looked bright, and they finally felt they could put the hell they’d been through behind them.

The problem was, they had things that most of the other survivors could only dream about. And despite all their efforts to hide their compound just prior to the disaster, word got around.

Not far from the compound was the small town of Eden. Despite its Biblical name and all the connotations that went with it, the town wasn’t particularly special. A way station, really, about halfway between San Angelo and San Antonio.

Eden’s primary industry was a federal prison. Before Saris 7 collided with the earth and blacked out the sun, pretty much every business in town either supported the prison directly or peripherally.

Eden prided itself on being called “a prison town.”

Warden John Salk had a horrific choice to make. The meteorite struck northern China, sending a thick cloud of dirt and debris into the atmosphere. Scientists said the sun would be obscured for five to seven years, and ninety percent of mankind would perish.

As panic spread and temperatures started to drop, Warden Salk’s workforce left en masse to be with their families. He had to decide whether to leave the convicts in their cells, to die of starvation or freeze to death, or set them free and give them a chance to survive.

He set them free, then went home to his family to die with them.

Most of the convicts scattered with the wind. Some of them raided houses in Eden, killing the homeowners and taking over their homes.

A band of twenty stayed in the prison, locked it again to keep others out, and lived fairly comfortably on its food stores. By heating only a small portion of the prison and burning everything they could find, they managed to survive until the thaw.

Word spread that a fenced compound a few miles west of Eden contained livestock and fresh produce. And in a world where the few survivors were scratching out a meager existence, it was too big a prize to ignore.

The forty one had survived life in the mine together. They survived a vicious battle that temporarily forced them from their compound. Then they won another battle and took the compound back.

In the process they shed blood and became hardened. Their innocence gone, they adjusted to a newly violent world, where few men could be trusted.

This was a group of good people – God fearing people, who only wanted to live and be left alone. But from the beginning, they’d had to endure one struggle after another.

Now, it seems, they’d have to take on the federal government.

It was to be their biggest battle to date.

But they were up to the task.

And now, Book 5 of the series…

Hannah shook her young son gently by the shoulder.

Hannah sat on the edge of bed and spoke softly.

“Markie, honey, if you get up you can go on a special mission with your mommy and daddy.”

He slowly opened one eye, not sure whether he was dreaming.

Then the words sunk in. The other eye opened and he turned his head to look at her.

“My goodness, little sailor! That yawn was bigger than your whole head.”

“Mom, don’t be silly. It can’t be bigger than my whole head. What kind of special mission?”

“What do you mean, it can’t be bigger than your whole head? It can if I say so, ‘cause I’m your mommy.”

“Mommm… it can’t be bigger than my head because my mouth doesn’t stretch that big. What kind of special mission?”

“Are you sure your mouth doesn’t stretch bigger than your head? I thought for sure it could. Your daddy’s mouth can stretch so big he can swallow his whole head down to his ears.”

Markie giggled, but was getting a little frustrated at Hannah for avoiding his question.

“Yes, Mommy, I’m sure. Now what special mission are we going on?”

“Oh, did someone say something about a special mission?”

“Oh, Mom, you drive me crazy sometimes!
You
said something about a special mission.”

She loved it when he used a phrase or said something he picked up from his father. When he said she was driving him crazy, he looked just like Mark. And sounded like him, too.

He crossed his arms and nodded his head decisively.

“Well, if I said it, it must be true. But it’s a big secret, and I’m not telling you what it is until you get up and get dressed and give me one hundred hugs and one hundred kisses.”

“Not true, little man. I treat your father the same way. Sometimes I make him hug me and kiss me before I tell him things too. And he’s way old.”

“But he’s supposed to hug you and kiss you. He’s your married person.”

“My husband, Markie. He’s my husband. And you’re my son. So you have to give me hugs and kisses too.”

“I’ve seen the way you kiss Dad. I’m never gonna kiss you
like that.
”

“Oh, I don’t want you to kiss me like
that
, honey. Just pucker up your lips like you’re going to whistle and kiss me on the cheek. And then I’ll be happy.”

She leaned over and he kissed her on the cheek.

She said, “Good. Now only ninety nine to go.”

At that moment, Mark walked into the room to see what was taking so long.

“Ewww, now you have Markie cooties! Now you have to go get another shower!”

He looked at Markie and said, “Get up, sleepy head. How are we going fishing if you’re going to stay in bed all day?”

His little eyes grew as big as saucers.

Hannah looked at Mark and said, “Spoilsport! You had to go and tell him before I got the rest of my kisses. Now you’ve ruined everything.”

Mark was lost. He looked at his son.

“Mommy wasn’t gonna tell me until I gave her a hundred kisses.”

Hannah stuck her tongue out at Markie and said, “Ha, ha, little man. Daddy’s on my side!”

He looked at Mark and asked, “How come I have to kiss her ten times? I already know where we’re going.”

“Because kisses are very important to mommies and girls in general. They need three things to live. Air, food and kisses. And if you don’t kiss her she’ll make me do it.”

Markie knew he lost the battle at that point, and puckered up and kissed his mom on the cheek again and again.

He stripped off his Spiderman pajamas as he asked, “Are we really going fishing?”

“Yep. We sure are. We’ve got everything all packed up and ready to go.”

“Yay! But what about breakfast?”

“Miss Helen made some great breakfast tacos and packed them for us. We’ll stop halfway to the lake and eat.”

“It’s as far as it is from here to the bathroom. A zillion million times.”

“I don’t think I can walk that far. Can we drive there instead?”

“I’m sorry, son. The woods are too thick. But I’ll tell you what. If you enjoy our trip and want to go again, then you and I can start working on your first big man project together.”

“That’s a project that only superheroes and he-men can handle. If you have fun on our fishing trip, then you and I will take the Gator out to the woods and start clearing a trail to the lake. That way we can start driving there instead of walking.”

Fifteen minutes later the trio were heading down the stairs on their way out of the building. They stopped by the control center so they could change the batteries on their radios.

Hannah said, “Baby, we can leave one of the radios behind, right?” I mean, no sense in carrying two of them if we’re gonna be together.”

John was on duty at the security desk.

They looked at him.

“Because some of them have been acting up lately. If one of them doesn’t have a far enough range, or gives out, I don’t want to be out of touch with you.”

Bryan was walking by.

“Yeah, that’s right. In case he tries to stand up in the boat again and we have to come and fish you all out of the water.”

“Hey, it’s a cute story. I had to share it with Bryan and Sarah.”

“And everybody else, I imagine.”

“And the only way I’ll need your help is if I catch a fish so big we can’t carry it back by ourselves.”