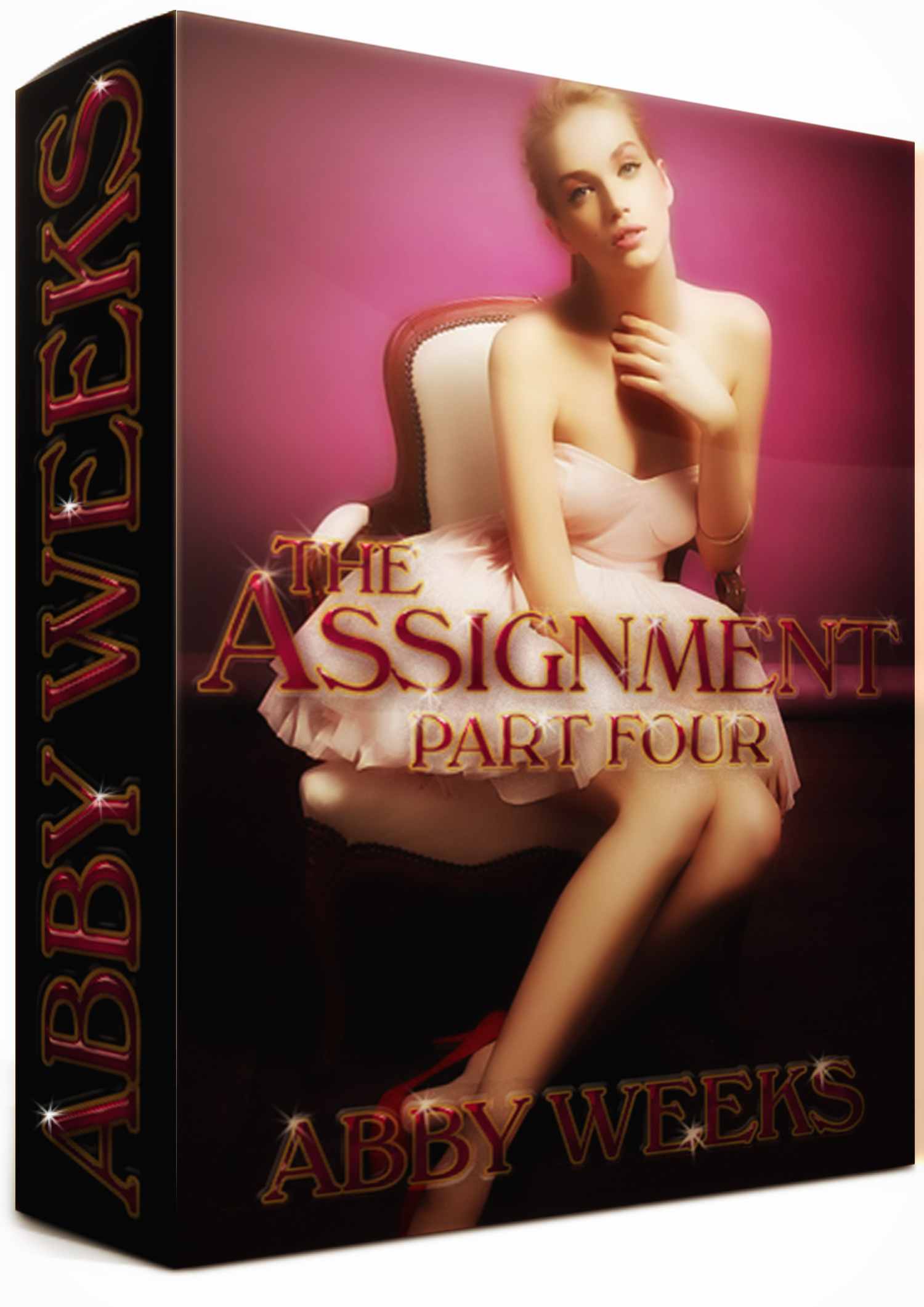 This work is presented by the author.

“EROTICISM HAS ITS OWN MORAL JUSTIFICATION BECAUSE IT SAYS THAT PLEASURE IS ENOUGH FOR ME; IT IS A STATEMENT OF THE INDIVIDUAL’S SOVEREIGNTY.”

L
ACEY LAY ON JASON’S SOFT,
warm bed and stared at the ceiling. She felt so happy there, so safe. She was in no hurry to leave. She felt like a princess, lying naked on his bed as she looked around the room. There was a shelf of old, leather bound books along one wall. She pictured Jason reading them and smiled. He had all those books and no television. At the end of the bookshelf was a small, brick fireplace with a pile of chopped wood by it. She wondered where he managed to find firewood in the city.

There was a desk and she got up and went to it. An old camera sat next to some lenses and rolls of film. She saw a small pile of black and white prints and picked them up and flipped through them. They were of dilapidated buildings, pigeons, old men playing chess at Washington Square Park. The pictures were beautiful. Clearly, Jason had an interest in photography. At the bottom of the stack was a brown envelope and she couldn’t help look inside. She knew she was snooping but she was too curious not to. She was so curious about Jason.

The envelope contained a very different set of prints. These seemed to be surveillance photos of some paramilitary group, taken with a telephoto lens. Lacey sometimes came across pictures like this at the magazine’s photo department. She knew the risks photographers took to get them. There were men dressed in black combat gear carrying assault rifles. They looked like photos of resistance groups in the Middle East or Africa, but these men were clearly in New York. She recognized the restaurants and narrow streets around Maiden Lane and Nassau Street. That was down on the southern tip of Manhattan, close to where the financial institutions had their headquarters. What the hell was going on? She was surprised. What was Jason getting himself involved in? Why was he taking pictures of soldiers? The pictures worried her. There was something about them that made her uneasy. She put the prints back into their envelope carefully and put it back where she’d found it.

She saw a journal with a black leather cover and picked it up. She opened it. It’s pages were full of handwritten entries. She stopped herself from reading. It was too much of an invasion of Jason’s privacy. She knew if he was in her apartment she wouldn’t want him going through her things like this. She hadn’t intended to snoop and she’d already seen too much. She wished she hadn’t looked at the photos in the envelope.

She tried to get them out of her head. There was an old chipped vase on the corner of the desk with some wilted, handpicked flowers in it. She thought it was cute that he had flowers. It was unusual for a boy. She prayed some girl hadn’t given them to him. She was pretty sure Jason had picked them himself. It seemed like something he would do.

She went over to the stove and put on some water for more coffee. She went into the bathroom. It was a typical boy’s bathroom as far as she could tell. There was an almost empty bottle of shampoo in the shower, no conditioner, no body wash. There was a toothbrush and squished tube of Colgate toothpaste by the sink. There was a disposable razor next to them. The rest of the pack of razors, some shaving foam, a stick of deodorant and a jar of hair gel were on a shelf under the mirror. She turned on the water in the shower. There was a stack of clean, white towels by the window which she was glad to see. She got into the shower and washed with the shampoo.

Lacey couldn’t believe how comfortable she felt in Jason’s apartment. She’d never felt so comfortable in anyone else’s home before. She even grabbed one of his disposable razors and shaved her legs. When she got out she brushed her teeth with Jason’s toothbrush, she was sure he wouldn’t mind. There was no hairdryer and she wrapped a towel around her head and went back to the kitchen to finish making the coffee. She put on her underwear and one of Jason’s shirts and sat at the table in the kitchen, sipping the coffee. She felt so cozy there, so safe.

She was happy. She shook her head at the thought. How could she be happy with so much going on in her life? She didn’t care. She really was happy, she knew she was. She looked over at the camera and the lenses on Jason’s desk. The equipment looked professional. She tried not to think about it the photos in the envelope, the strange men carrying rifles and wearing black berets on the streets of New York. The pictures troubled her. Who were those men? Why was Jason watching them?

She really didn’t know anything about Jason. He was a complete mystery to her. He could be involved in absolutely anything and she would have no idea. She told herself she was overreacting, that the pictures could be anything, they could be some art project. She told herself not to sabotage the first beautiful relationship she’d ever had.

But those pictures just kept niggling away at her. She went back over to the desk and picked up the journal. The first page was dated six months earlier. It contained lists of addresses or street locations with numbers next to them. She flipped through the pages. The entire journal was like that, with long lists of locations and numbers.

It worried her. She’d seen enough in her work as a reporter to know when someone was seriously engaged in surveillance. That was exactly what this looked like, with photos printed at home, logbooks of places and numbers, long-focus camera lenses. It looked like the stuff she would see on the desks of photographers at the magazine when they were deep in some investigative story.

She put everything back carefully where it had been. There was a drawer under the desk and instinctively she looked over her shoulder before opening it. She was upset with herself for violating Jason’s privacy like this but she couldn’t help it. What she had seen gave her a definite sense that something more was going on than what met the eye.

She tried the drawer. It was locked. She sighed but in a way she was relieved too. It meant she could stop snooping around. She could stop violating Jason’s privacy so blatantly. Then she remembered having seen a key somewhere. It was on the bedside table. She went and got it and tried it in the drawer. It opened with a click. Not exactly top security, she thought, leaving the key where it could be seen, but then she supposed Jason probably hadn’t expected anyone to be snooping around his home. She pulled open the drawer. It seemed to be stuck and she gave it a yank.

She put her hand over her mouth when she saw what was inside. How could she have been so stupid? What was wrong with her? She must really have a self-destructive instinct because as soon as she met a nice guy she had to go ruin it by snooping around. She shook her head. She thought she might cry. She had been so taken by Jason, so infatuated by him. She mustn’t have been thinking straight.

He’d been so nice to her, so kind. Why couldn’t she leave things as they were? Why couldn’t she just enjoy it while it lasted. Why did she have to go snooping around till she found something?

Sitting inside the drawer, looking heavy and lethal, was a cold, steel handgun. It had a silver barrel and a black grip. It looked like it was meant for business. Next to it was an unopened packet of bullets.

Who was Jason? How could she have been so stupid as to fall for him without knowing anything about him? And why couldn’t she just let things lie and enjoy the relationship? Instead she had to ruin it by snooping around and putting her nose where it didn’t belong.

L
ACEY GOT OUT OF THE
cab and pulled her jacket around her shoulders as tightly as she could. She’d called Claudia from Jason’s and arranged to meet. She’d taken the taxi straight to the cafe on the Upper East Side without bothering to go home and change first.

“Lacey,” Claudia called from her table. She looked Lacey over with a smirk. “You look great!”

Lacey looked at the skimpy dress and high heels she was in. “I was on a date last night.”

A waitress came over and took Lacey’s order.

“Looks like you didn’t make it home,” Claudia said, mischievously.

“No,” Lacey said, “but I probably should have.”

“That’s the problem. He’s really nice. Dreamy even. We had a magical night.”

“That doesn’t sound too bad.”

“But then this morning after he’d gone out I found a gun in his apartment. And a pack of bullets.”

“Sweetheart, you don’t grow up in my neighborhood and not get to know a few players. They’re all flashy and charming, confident as hell, throwing cash around like it’s nothing. Next thing you find out they’re dealing. It’s always the same thing. Was that the kind?”

“Not really,” Lacey said. She cast her mind back to Jason, to the way he’d been last night at the restaurant. He’d introduced her to his friends, old men from Spain who’d treated her so graciously and courteously. Jason hadn’t been flashy at all. His place was nice but modest. It didn’t look like a drug dealer’s apartment, not that Lacey knew what a drug dealer’s apartment was supposed to look like. “Not at all, actually,” she said. “He was really kind. He was gentle. He didn’t seem like the type.”

“Listen, Lacey, I’ve got nothing against the boy but do yourself a big favor and stay the hell away from him. Those guys, however they seem, they’re bad news. Either he’ll hurt you, or someone will hurt him and it will break your heart.”

Lacey nodded. She knew what Claudia was saying made perfect sense. She knew she was being naïve, she knew she was being foolish, but she wasn’t ready to walk away from Jason. There was definitely more going on with him than she’d originally thought, but he’d told her that much himself. Just as she had her secrets he had his and he’d been honest with her about that much, at least. She didn’t know what she was supposed to do. She couldn’t call off the whole relationship, not after the night she’d just spent with Jason. She would give him a chance to explain himself. She wanted to change the subject.

“Claudia,” she said, “tell me what you found out about Lally.”