Read The Autobiography of Red Online

The Autobiography of Red 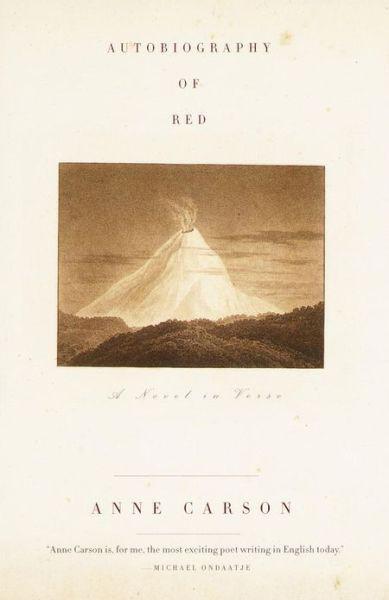 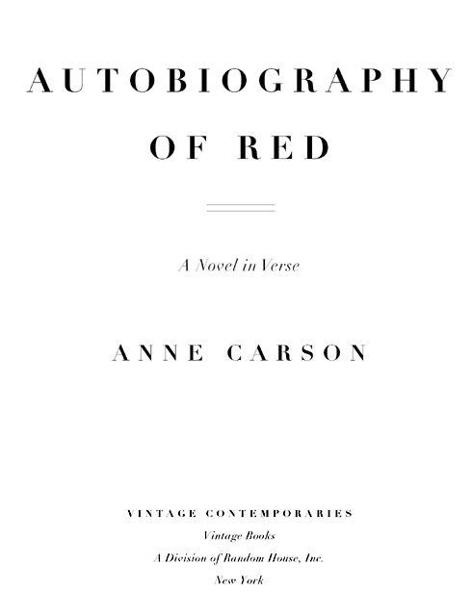 Grateful acknowledgment is made to Harvard University Press for permission to reprint poem no. 1748 by Emily Dickinson from
The Poems of Emily Dickinson
, edited by Thomas H. Johnson (Cambridge, Mass.: The Belknap Press of Harvard University Press), copyright © 1951, 1955, 1979, 1983 by the President and Fellows of Harvard College. Reprinted by permission of the publishers and the Trustees of Amherst College.

Note to Readers of the Ebook Edition

This book contains long lines of poetry. The line below is the longest in the book.

She says it’s got blood in it. What do you mean blood? Cow blood, it’s a local recipe. Supposed to

If this line is breaking on your e-reader, please click
here
to view the book in its original print format, per the author’s intent. You may also choose to decrease the font-size setting and/or view the book in landscape format until the entire line fits on your screen. This may not be possible on all e-reading devices.

Note to Readers of the Ebook Edition

The Autobiography of Red: Full-Page Images

as they want to do and as they have to do.

H
E CAME
after Homer and before Gertrude Stein, a diffi-cult interval for a poet. Born about 650
B.C.
on the north coast of Sicily in a city called Himera, he lived among refugees who spoke a mixed dialect of Chalcidian and Doric. A refugee population is hungry for language and aware that anything can happen. Words bounce. Words, if you let them, will do what they want to do and what they have to do. Stesichoros’ words were collected in twenty-six books of which there remain to us a dozen or so titles and several collections of fragments. Not much is known about his working life (except the famous story that he was struck blind by Helen; see
Appendixes
A
,
B
,
C
). He seems to have had a great popular success.
How did the critics regard him? Many ancient praises adhere to his name. “Most Homeric of the lyric poets,” says Longinus. “Makes those old stories new,” says Suidas. “Driven by a craving for change,” says Dionysios of Halikarnassos. “What a sweet genius in the use of adjectives!” adds Hermogenes. Here we touch the core of the question “What difference did Stesichoros make?” A comparison may be useful. When Gertrude Stein had to sum up Picasso she said, “This one was working.” So say of Stesichoros, “This one was making adjectives.”

What is an adjective? Nouns name the world. Verbs activate the names. Adjectives come from somewhere else. The word
adjective
(
epitheton
in Greek) is itself an adjective meaning “placed on top,” “added,” “appended,” “imported,” “foreign.” Adjectives seem fairly innocent additions but look again. These small imported mechanisms are in charge of attaching everything in the world to its place in particularity. They are the latches of being.

Of course there are several different ways to be. In the world of the Homeric epic, for example, being is stable and particularity is set fast in tradition. When Homer mentions blood, blood is
black.
When women appear, women are
neat-ankled
or
glancing.
Poseidon always has
the blue eyebrows of Poseidon.
Gods’ laughter is
unquenchable.
Human knees are
quick.
The sea is
unwearying.
Death is
bad.
Cowards’ livers are
white.
Homer’s epithets are a fixed diction with which Homer fastens every substance in the world to its aptest attribute and holds them in place for epic consumption. There is a passion in it but what kind of passion? “Consumption is not a passion for substances but a passion for the code,” says Baudrillard.

So into the still surface of this code Stesichoros was born. And Stesichoros was studying the surface restlessly. It leaned away from him. He went closer. It stopped. “Passion for substances” seems a good description of that moment. For no reason that anyone can name, Stesichoros began to undo the latches.

Stesichoros released being. All the substances in the world went floating up. Suddenly there was nothing to interfere with horses being
hollow hooved.
Or a river being
root silver.
Or a child
bruiseless.
Or hell
as deep as the sun is high.
Or Herakles
ordeal strong.
Or a planet
middle night stuck.
Or an insomniac
outside the joy.
Or killings
cream black.
Some substances proved more complex. To Helen of Troy, for example, was attached an adjectival tradition of whoredom already old by the time Homer used it. When Stesichoros unlatched her epithet from Helen there flowed out such a light as may have blinded him for a moment. This is a big question, the question of the blinding of Stesichoros by Helen (see
Appendixes
A
,
B
), although generally regarded as unanswerable (but see
Appendix
C
).

A more tractable example is Geryon. Geryon is the name of a character in ancient Greek myth about whom Stesichoros wrote a very long lyric poem in dactylo-epitrite meter and triadic structure. Some eighty-four papyrus fragments and a half-dozen citations survive, which go by the name
Geryoneis
(“The Geryon Matter”) in standard editions. They tell of a strange winged red monster who lived on an island called Erytheia (which is an adjective meaning simply “The Red Place”) quietly tending a herd of magical red cattle, until one day the hero Herakles came across the sea and killed him to get the cattle. There were many different ways to tell a story like this.
Herakles was an important Greek hero and the elimination of Ger-yon constituted one of His celebrated Labors. If Stesichoros had been a more conventional poet he might have taken the point of view of Herakles and framed a thrilling account of the victory of culture over monstrosity. But instead the extant fragments of Stesichoros’ poem offer a tantalizing cross section of scenes, both proud and pitiful, from Geryon’s own experience. We see his red boy’s life and his little dog. A scene of wild appeal from his mother, which breaks off. Interspersed shots of Herakles approaching over the sea. A flash of the gods in heaven pointing to Geryon’s doom. The battle itself. The moment when everything goes suddenly slow and Herakles’ arrow divides Geryon’s skull. We see Herakles kill the little dog with His famous club.

But that is enough proemium. You can answer for yourself the question “What difference did Stesichoros make?” by considering his masterpiece. Some of its principal fragments are below. If you find the text difficult, you are not alone. Time has dealt harshly with Stesichoros. No passage longer than thirty lines is quoted from him and papyrus scraps (still being found: the most recent fragments were recovered from cartonnage in Egypt in 1977) withhold as much as they tell. The whole corpus of the fragments of Stesichoros in the original Greek has been published thirteen times so far by different editors, beginning with Bergk in 1882. No edition is exactly the same as any other in its contents or its ordering of the contents. Bergk says the history of a text is like a long caress. However that may be, the fragments of the
Geryoneis
itself read as if Stesichoros had composed a substantial narrative poem then ripped it to pieces
and buried the pieces in a box with some song lyrics and lecture notes and scraps of meat. The fragment numbers tell you roughly how the pieces fell out of the box. You can of course keep shaking the box. “Believe me for meat and for myself,” as Gertrude Stein says. Here. Shake.