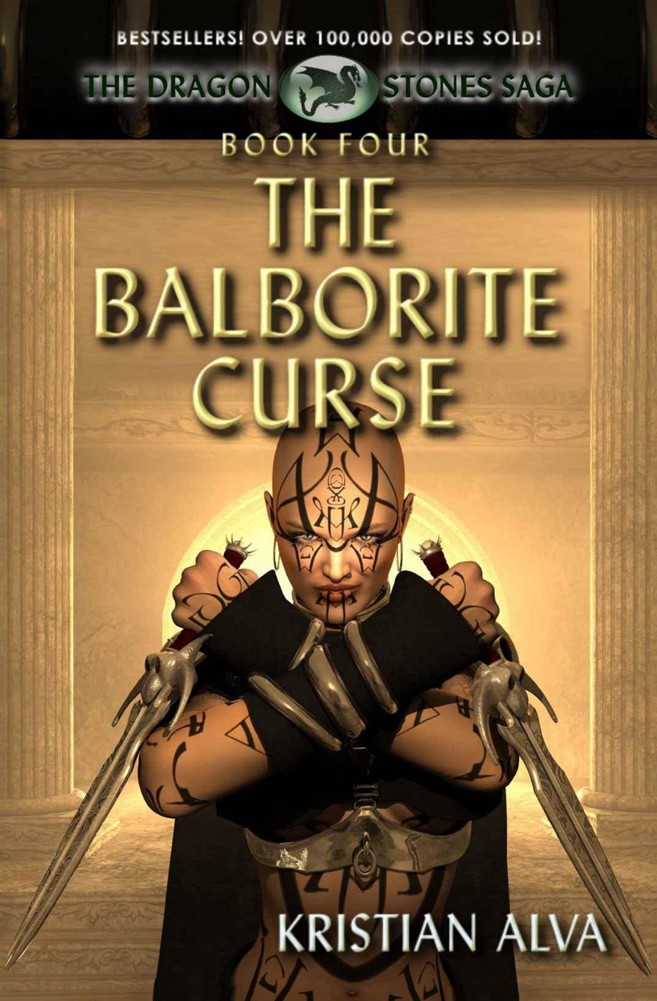 Book Four of the Dragon Stones Saga (Chronicles of Tallin)

Blood Raven in the Desert

This book contains material protected under International and Federal Copyright Laws and Treaties. Any unauthorized reprint or use of this material is prohibited. No part of this book may be reproduced or transmitted without express written permission from the publisher.

Printed in the United States of America. The Dragon Stone Saga
® is a registered U.S. trademark. All rights reserved.

Book Two: The Return of the Dragon Riders

Tallin the dragon rider gazed out upon the Death Sands, arms folded across his chest. Even in the spring, the desert was a harsh place, but he loved its stark beauty. Dry scrub and tufts of stubborn yellow cactus peppered the landscape, and beyond the horizon there were endless tracts of gold-colored dunes. He could see a long way in the clear, dry air. The dawn had melted away into a dazzling noon, and it was already suffocatingly hot.

Beads of perspiration stood upon his brow, matting wisps of red hair against his forehead. Scorching wind, laden with dust, eddied against the wall, leaving coppery grit everywhere. The cloudless sky was intensely blue, shimmering like a sea of cornflowers.

Tallin was a dwarf half-ling, born and raised with other dwarves at Mount Velik. Though he had spent his childhood with his own people, his adult years had brought him to the solitude of the desert, and he considered this place his home.

An orange and blue pennant swayed lazily in the breeze, displaying the official colors of the realm. The colors were woven into Tallin
’s clothing, too, stitched into the sleeves of his tunic and wrapped around his waist in a belt of knotted leather.

Tallin touched the ring on his finger with his thumb, a gift from the king some years ago. It was a band of gold crowned with a huge center sapphire. The center stone was surrounded by an intricate array of small citrines. A tiny black dragon was carved into the band, as well as embroidered on the corner of his left lapel: a symbol that stood for the united kingdom of Parthos and Morholt. The land was at peace, at least for now.

He leaned against the wall, looking out over the ramparts. A single road, edged with cobblestones, crested down from the dunes toward the main gate. The line of visitors stretched back a half-league, waiting to be searched in the long line that wound down to the gate. Each person, cart, and animal entering the city was subject to scrutiny. The soldiers at the gate did their job methodically, in silence.

The guards searched the baskets of an older man, but let his young children pass through without question. Despite the wait and the oppressive heat, the travelers remained patient, and no one complained.

Tallin watched the crowd with a careful eye. He was a mage and had been monitoring the city gates for days. Duskeye, his companion, was a sapphire-blue dragon, his enormous body resting underneath a fabric canopy nearby. Duskeye raised his long neck and blinked his good eye lazily, peering out over the barren landscape.

Duskeye and Tallin were bound together as rider and dragon; the carved dragon-stone that glittered at the base of their throats verified their permanent bond. Like all dragon riders, Tallin and Duskeye had pledged to defend this city, as well as the surrounding desert. Parthos was a magnificent keep, carved right into the mountain. The design was an impressive feat of engineering, built to withstand both siege and the threat of constant erosion from the harsh environment.

A maze of covered aqueducts, fed by a deep underground spring, ensured that the city always had clean drinking water. Neat terraces of drought-resistant plants were cultivated up the craggy mountainside, maximizing arable land and reducing water loss. Camels grazed outside the walls, eating the thorny shrubs that sprouted up in the arid climate.

Nomadic women followed behind the herds with straw baskets, collecting dung. The nomads pressed the dung into neat bricks and sold them in the street market to be used as an efficient cooking fuel. The bricks were slow-burning and virtually smokeless, making firewood unnecessary.

Tallin turned his gaze to an old garrison outside the main wall, now doubling as a makeshift camp for foreign merchants who stayed here to trade. An array of tents and cook-fires dotted the sand.

Just then, there was a clamor at the city’s entrance. An old man’s voice shouted something unintelligible, and a hissing sound filled the air as one of the guards drew his sword. Duskeye looked out over the ramparts and pointed into the wind. "
What is happening at the gate?"

Tallin leaned over the wall for a better view.

“Duskeye, let’s go. Something unusual is happening,” said Tallin. Duskeye lowered his neck so Tallin could mount the leather saddle. The dragon took flight, circling down near the guard station.

Duskeye landed with a loud thump, his body stirring up sand. The crowd quieted immediately, parting to let them through. Many people turned their heads in respect, and a few girls giggled nervously and waved, trying to catch the rider’s eye.

Tallin addressed a soldier at the gate. “What’s going on?”

Off to the side, the soldiers held a man under guard, a nervous merchant who smelled like sweat and dust. “This man is a smuggler, sir,” said one of the guardsmen. “We searched him and found this.” The ebony-skinned guard passed Tallin a glass vial.

Tallin’s eyebrows shot up. He recognized this type of glass—it was rare Balborite crystal, exquisite in its beauty and resilience, designed to hold the deadliest of poisons. It was also illegal.

Tallin accepted the vial from the guard and gripped it between his thumb and forefinger, holding it up to the sun. Light reflected off the oily liquid inside, which had a pearl-like sheen. He immediately knew what it was.

Curious onlookers craned their necks to see, even as they maintained a prudent distance. One old woman caught a glimpse of the vial, and her eyes rounded with surprise. “It’s kudu oil! They found kudu!” she cried, and a collective gasp went through the crowd.

The woman was right—this was deadly kudu oil. A single drop was lethal, and a vial this large could kill a hundred men. A murmur of excitement mixed with fear swept through the crowd.

The accused man fell to his knees. “I’m innocent, I’m innocent! I didn’t do anything, I swear!” he wailed.

Tallin gave the order to close the city and seal the gates. “Close the garrison doors. No one else may enter Parthos. Strip this merchant down, search his bags, and bring him inside the city. He is our prisoner now.”

“W-what, but why?” the man sputtered, “and what about my camels?”

The captain gave the prisoner a withering look, then turned to the other guardsmen. “Slaughter his camels and search the entrails for ampules.”

“My camels? You can’t kill my camels!” he protested.

“As you command, my lord,” said the guardsmen, ignoring the now-hysterical prisoner. The guard sounded a small animal horn, and four more sentries materialized in an instant, dragging the struggling prisoner by his arms.

The captain turned around to address the crowd. “Citizens and guests, raise your tents if you wish, but no one else shall pass through these doors today. The gates will be reopened at dawn tomorrow. If you need water for your animals, a guard shall bring it to you outside.”

With a polite nod and a wave of dismissal, he sealed the doors. There were a few grumbles, but the waiting crowd dispersed quietly. Some unpacked their tents for the night, while others turned around to leave.

Inside the city, the prisoner refused to be dragged away. Two soldiers struggled to hold him as he fought. “Stop this!” he screamed. “This is outrageous. I demand an audience with the regent!”

“Keep quiet,” said one of the guards, delivering a slap to the back of the man’s head, which only made him fight harder.

“Don’t touch me, you rotten blighters! Let me go! Let me go!” he screamed over and over, struggling as he fought to break free.