Read The Bard of Blood Online

The Bard of Blood 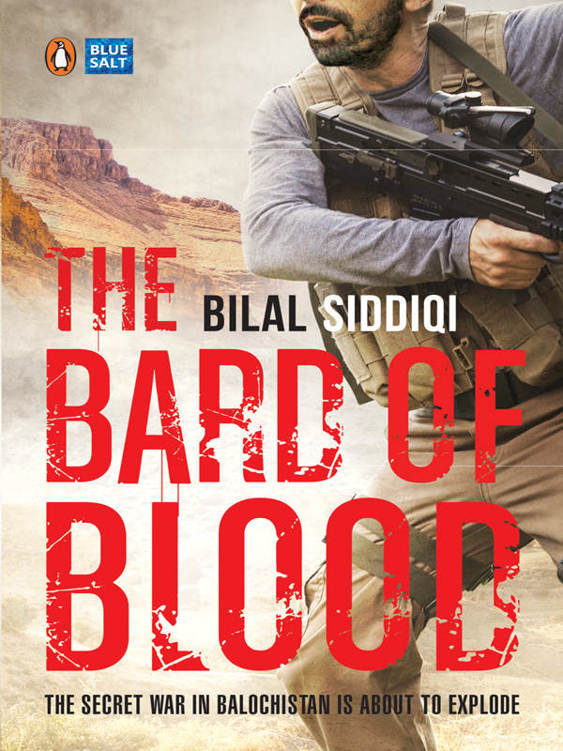 BILAL SIDDIQI
THE BARD OF BLOOD

Part I: ‘Come What Come May’

Part III: The Crack of Doom

THE BARD OF BLOOD

Bilal Siddiqi, aged twenty, started writing this book last year. He is a student of St Xavier’s College, Mumbai, and is due to graduate in 2015 with a bachelor’s degree in mass media. He wrote the official blog for the Kolkata Knight Riders team of the Indian Premier League in 2014. He is currently working at Red Chillies Entertainment. He lives with his family in Mumbai. This is his first novel.

Nana Abba, you live on through your beautiful wife and daughter.

If what they say is true, maybe some day you and I will meet up there and discuss this book . . .

PART I
‘Come What Come May’
Prologue

A fourteen-year-old boy, the youngest in the crowd, watched the four men rolling on the rocky ground. Their faces were caked with blood. Their bloodshot eyes were half open. A white discharge seeped from the corner of their mouths. The sun beat down hard upon them. The boy looked up at his father’s animated face, quizzically.

The boy’s gaze shifted back to the four semi-conscious men on the ground. The people in the crowd, all members of the Taliban, jostled with each other to get a better look at the wounded men. It had been almost two hours since they had been waiting at the venue—a large, barren ground, enclosed within high steel grilles and barbed wire. This killing field was perched atop a low hill. The men wore black kurtas and covered their faces in chequered scarves as protection from the gusts of dusty wind that blew about. As the clock ticked, they began to grow impatient and belted out uncouth slogans. But none left, because they were about to witness the beheading of four nationals of a country they had been taught to loathe. And the moment they had been waiting for had finally arrived.

Two white Toyota off-road vehicles made their way through a metal gate and up the low hill. The crowd gasped collectively in awe as a turbaned man stepped out of the rear seat of one of the vehicles. He was tall, around six foot four, and had a black eyepatch to go with his black salwar-kurta. He was rather elderly, as the grey in his beard revealed. The man glanced around at the soldiers waiting to catch a glimpse of him and raised one hand to greet them. They cheered raucously.

‘Who is that, Abbu?’ the young boy asked his father, curiously.

The boy’s gaze shifted back to the mysterious man.

‘The Commander of the Faithful, my son. When Allah summoned our beloved Prophet Muhammad, peace be upon him, to
jannat
, his spot was left vacant on earth. The Almighty needed someone to lead the faithful Muslims on this planet.’

A few questions popped up in the boy’s head, as he saw machetes being sharpened. The Amir was circling the four Indian prisoners, staring at their twisted forms on the ground.

‘So, this is our new Prophet?’ the boy asked innocently.

‘There is only one Allah, and Muhammad is his Prophet.’ His father smiled. ‘But Mohammed Omar is the new leader of the Muslims, son. In the city of Kandahar, there was a large mosque that held our Prophet’s cloak in a series of locked chests. The Prophet had said that anyone who could retrieve the cloak would be his successor. Many tried and failed. Until a Pashtun, like you and me, came along.’

The boy gazed in admiration at the old man with the eyepatch. The blowing wind made the dust swirl up behind him, making him look heroic. The eyepatch added to the mystery that surrounded him. He had been wounded severely during the 1989 battle in Jalalabad, during the Afghan Civil War. He survived, but his left eye couldn’t. A fragment of shrapnel had destroyed it completely. Since then he had worn an eyepatch. His eye bled sometimes, a sign that he was furious. And when
his
eye bled, people bled.

‘Son, I have brought you here to show you our leader. All of us here are a part of his Taliban. We fight for his cause, because his cause is Allah’s will. You should consider yourself lucky. Not everyone gets to see him because men from foreign lands, the kafirs, are waiting to kill him.’

‘He is a good man if he is carrying out Allah’s will,’ the boy reasoned. ‘Why would they want to kill him?’

The father was about to reply, when the Amir’s voice boomed from a megaphone. He was pointing at the four prisoners that lay near his feet, trussed up like turkeys.

‘Four Indians,’ he bellowed into a microphone, to the people that had gathered to witness the execution. He had taken his place behind the four prisoners on the ground. His men stood respectfully behind him, each with a machete of his own.

‘Hindustanis,’ he continued, his voice climbing up in decibels. ‘Friends of the Americans. Enemies of Our Cause. Above all, enemies of Islam!’

He looked down briefly at the captives, as the crowd cursed in unison.

‘Yes, my soldiers. These four have been caught spying on us,’ he continued. ‘Indian agents.
Jasoos
. They don’t seem to understand that meddling in our business and meddling with Allah’s will isn’t good for them. But they still do it. The Indians, the Americans, all of them. Above all, they fail to realize that interfering in my mission to create an Islamic caliphate is going to cost them, and everyone like them, their lives! Today, my loyal mujahideen, I will set an example!’

The crowd cheered raucously, as the Amir took a machete in his hand and held it high.

‘My aim, as many of you know, is to get the haram Americans out of our beautiful land and direct the Talib insurgency against them and the Government of Afghanistan. After that, I will create a greater land . . . Pashtunistan!’ His voice boomed through the speakers. ‘But how can I possibly do this if people like these keep getting in my way?’

He waved his machete in the air.

‘I had promised to destroy America. But I will also destroy its allies,’ he sneered. The crowd cheered as if they were witnessing a well-fought cricket match.

‘I want four volunteers,’ he said as he held the machete out and walked towards the crowd that consisted mostly of the members of his army, ranging in age from fourteen to fifty. He scanned the crowd for worthy volunteers with his one good eye. It settled on a group of young boys, who, like everyone else, had their arms stretched out, hoping to be bestowed with the honour of executing the prisoners. He liked young boys.

The young boy raised his hand. The Amir stopped in front of him and motioned him to step out. The boy walked out, warily. His father’s chest puffed with pride.

The boy and the other volunteers were handed a machete each. The men had their heads rested on a tree trunk.

‘Enjoy the fear in their eyes.’ He smiled as he goaded the young boys. They were just young teens, but the power of having someone’s life at their mercy felt intoxicating. Cries of
Allah-o-Akbar
echoed through the mountains. The crowd had readied themselves to witness the act. They didn’t notice a Mercedes pulling up right behind the parked SUVs.

A burly middle-aged man got out of the car and ran hurriedly towards the prisoners. The boys with the machetes had braced themselves, as instructed by their Amir. They raised their machetes and the four captives closed their eyes, ready to accept their fate.

The Amir turned to look at the burly man who had just arrived running towards him. He motioned the boys to stop. They lowered their machetes.

The man stood on his toes and whispered into the tall Amir’s ear. The Amir looked at him angrily and shook his head. ‘No,’ he said. ‘I do not negotiate when it comes to such matters.’

The other man continued to reason. The Amir was visibly furious. The crowd looked on intently, watching their leader lose his cool.

‘Let them live for now and then we get to kill more like them,’ the other man said through gritted teeth, holding the Amir’s arm. ‘I have a plan, Amir. At least hear me out!’

The Amir contained his fury and paused to think. He stroked his wild grey beard and motioned the boys to drop their weapons and go back. They obeyed. The four agents opened their eyes, wondering if they were dead already. Strangely, they were not. They shot confused glances at each other. They saw the Amir walk up towards them and then turn to the crowd.

‘My friend here insists that these kafirs should not be killed,’ the Amir said. A collective gasp went through the crowd. And then he made a dismissive gesture. ‘That is all I can tell you for now, my faithful soldiers. Please leave peacefully.’

The crowd murmured as they walked out. He then turned towards the four agents, and knelt next to them.

‘I wanted to kill you,’ he said, ‘but this man and his people have other plans.’ The Amir looked at the four bewildered faces with sadistic pleasure.

‘I’m going to give your country a chance to let you live,’ he continued. ‘It is up to them to take this chance . . . which I know they won’t. You come from a country of selfish people. And I will kill you soon enough . . . soon after you realize that dying for them isn’t worth it.’

He was uncomfortably close to one of the men. The agent spat on him. The Amir, enraged, stood up and sent his boot into the agent’s face, knocking off several of his teeth. The man buckled and fell to the floor, unconscious.

Before he could do anything more reckless, the other man held his arm firmly and led him towards his car.

Maulana Mohammed Omar’s—Amir al-Mu’minin’s—right eye began to bleed. And when his eye bled, the people bled.