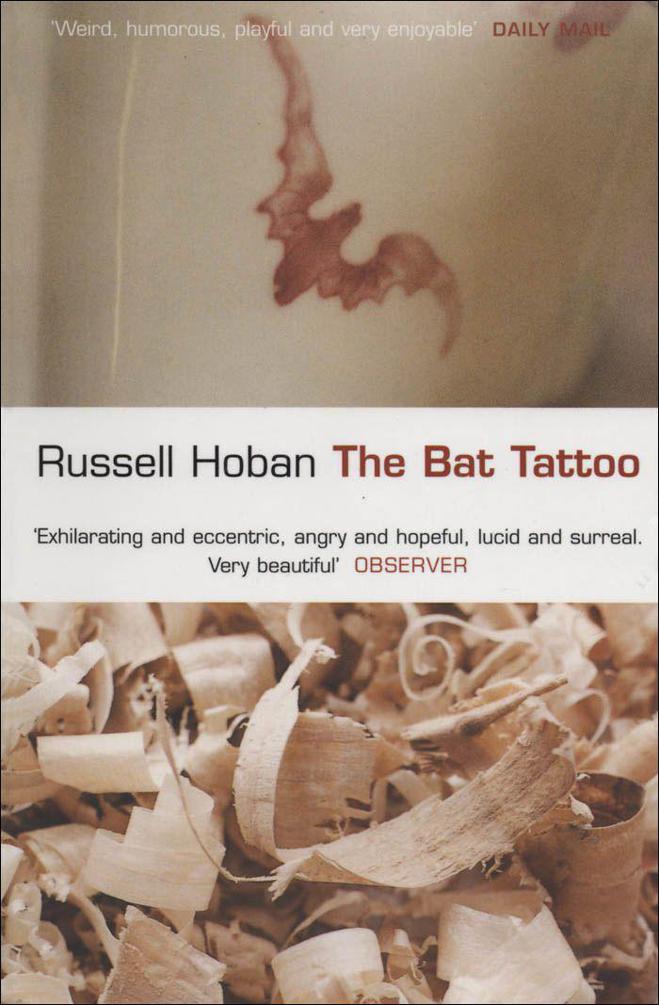 Whichever way you turn,
your arse stays always behind.

I thought a tattoo might be a good move. I’d reached the age of forty-seven without one but maybe the time had come. In one of my books there’s a photograph of a nineteenth-century Chinese chair cover with two really happy-looking bats on it and I imagined one of those bats on my shoulder bringing me luck. The chair cover was at the Victoria & Albert Museum so I went there to check it out.

It was one of those global-warming March days: people opening coats and jackets or carrying them. Tourists with maps and guides going up and down the steps while a woman sat there looking up at the grey sky with tears running down her face. There are benches to the right of the entrance but she was on those concrete steps which have very short risers; sitting on them brings your knees up too high — OK for a crying teenager but this was a woman in her mid-forties who didn’t strike me as a public crier. A big woman; even sat down she looked tall and broad with a strong weatherbeaten face, ruddy complexion, wide mouth, heroic nose. Almost I smelled salt air, saw her among barrels and cordage with other women at a long table filleting herring. Or pacing the shore, her shawl whipping in the wind, her eye to the sea.

When she saw me watching her she put her hand over her eyes. She had mousy hair, pulled back and held with a thick rubber band so that it hung down her back a little way. Black woollen cap, grey jumper, blue anorak, dark-grey long skirt, thick-soled boots with a lot of mileage on them. Heavy-looking shoulder bag beside her.

‘I’m fine.’ Looked at me a little angrily, I thought. Steely blue eyes. Talked posh, a low fruity voice like what was her name? Charlotte Green. Used to do late news or the shipping forecast on the World Service, maybe both. I have her on tape; she said ‘Dogger Bank’ in a way that made me want to drop everything and ship out on a North Sea trawler.

I was about to say that everybody needs help but I decided not to. ‘OK, I’ll leave you to it then.’

Before going in I turned to look at the traffic on the Cromwell Road. The cars, buses, and lorries all had places to go but I wondered how much difference it would make if they all went somewhere else. I usually have a song going in my head; this time it was ‘Is That All There Is?’ as sung by Peggy Lee.

In my rucksack was the book with a photograph of the chair cover; it was blue silk with a golden Chinese unicorn on it, and above the unicorn the two bats, one on either side; nothing spooky, they were dancing in that blue-silk sky like paper kites, their fancy wings all curvy and fringy. Getting one of those bats tattooed on my shoulder would be a big step for me — I wanted a closer look and I’d brought a camera with me hoping to get a little more detail than the picture in the book.

I showed the book to a woman at the information desk; she phoned a colleague but couldn’t locate the chair cover so she gave me a map and directed me to the Chinese gallery. By then the song in my head had changed to ‘From This Moment On’ as sung by Dad and I couldn’t help smiling at that.

Looking for a particular thing in a museum is like looking for a word in the dictionary — you keep being led astray. Bodhisattvas, Buddhist banners, bronze and jade and robes with dragons. Little earthenware ladies out of tombs: their robes were glazed, their faces not, their mouths were closed. Horses, T’ang Dynasty — their saddles were empty, waiting to take the dead to paradise. Just looking at those horses you could hear the clip-clop of their hooves in the silence.

There was a little bronze tomb guardian, something between a dog and a nightmare, who looked as if he could lick his weight in demons or anything else that came his way. Although I wasn’t dead I felt safer with him around. A place like that Chinese gallery is bound to be haunted by ghosts, demons, who knows what. For that matter, every place I know is haunted by ghosts, demons, and absent friends. There were all kinds of things in that gallery but no chair cover and no bats.

After a while I found myself in front of a large display case with a wonderful ivory boat model in it. It was about two feet long and it was a kind of floating double-decker pleasure garden with banners and lanterns on poles and a mast with
what might be a torch basket near the top. The various roofs, doors, windows and sidings were elaborately carved and filigreed. On the upper deck was a dining pavilion; were those flowers on the table, bottles of wine? The boat was being poled along by four crewmen in elegant robes and red caps whose poles reached only to the little square of glass the model rested on. A fifth man was in the bows with what might have been a sounding pole. A card lying on the surface of the square glass river said:

MODEL OF A BOAT
Carved and painted ivory, with
clockwork motor,
About 1800.
This model was brought to England
in 1803 by Richard Hall

Looking at that boat I wanted to be aboard it, cruising down a river of dreams while the polesmen stood motionless, the clockwork slowly unwound, and on either side passed the banks of a country never seen before. I cruised for a minute or two on the river of dreams but it flowed past scenes of my Michigan childhood, the white clapboard house in Ferndale, the Orpheus fountain at Cranbrook with the bronze figures stretching their arms towards music they couldn’t hear; it flowed past years of my London life, evening lights and happiness on Hungerford Bridge, Sunday walks along the river, and the crunching impact of metal on metal on a rainy night near King’s Cross. It flowed past tourists sitting on benches in the hall that went through China and Korea, and
when I saw a guard I stepped ashore and asked for directions to the nearest bat. He didn’t know, he said, but try Level D, Chinese ceramics.

Leaving Level A China I took a shortcut through the sculpture gallery and stopped to say hello to Handel. He was very casual in dressing-gown, nightcap, and slippers (one on and one off), stroking his lyre while a putto leant against his leg and took notes. The maestro was fully clothed under the dressing-gown but the putto of course was starkers. An elderly couple paused in front of the pair.

‘It was a different time,’ said the wife. ‘There were always putti knocking about in artists’ studios then.’

With a little guidance from the cloakroom attendant I took the stairs to Lower A, walked east for ten minutes or so past a great many things in bronze, wood, and china, found the lift, and went up to Level D. No bats right off but I had to stop and admire a ‘Model of a Daoist temple and adjacent landscape. Ivory and wood, with mother-of-pearl, semi-precious stones and metals. Chinese, about 1800.’ This was a temple on its own little mountain, with various outbuildings, a tower and a willow-pattern bridge with what looked like one of the chaps from the ivory boat on it, apparently part of a procession to the temple. Might there have been a race of tiny Cantonese working night and day to build the boat and the temple for the export trade? And when the job was done some hand, of a Chinese Vincent Price perhaps, touched them into ivory stillness and here they were. The card went on to say that the model ‘was acquired by the Museum of the Honourable East India Co. in 1810. It was believed to have been intended as a present for Josephine Buonaparte’. I wondered why she never got it.

I turned left, went round a corner, and there was a display case with various crockery on shelves. The woman who’d been crying on the steps was planted in front of it. Looking past her shoulder I saw a small bowl and a larger one, both with bats on them. The small bowl was pale green, the larger one white; the bats on both were red. I moved closer to see better and caught a faint scent of honeysuckle. Evidently I moved closer than I ought to have done because she turned and gave me a hard smile and said, ‘If you were a bit taller you’d be breathing down my neck.’

‘Sorry, I’ll go away and come back later. Do you think you’ll be finished here in fifteen minutes or so?’

She looked me up and down and I had a feeling that she didn’t like Americans. She was about six feet tall which made it more so. ‘I’m finished now,’ she said. ‘You’ve seen to that.’ She planted her foot on my chest, pulled out her spear, climbed into her chariot, and drove off, leaving me feeling surprisingly tired from so brief an encounter but free to give my full attention to the bats.

The card for the larger bowl described it as a ‘Lobed bowl, painted with bats, a symbol of happiness. Mark and Reign period of Yongzheng, 1722-1735. Julia C. Gulland gift.’ As I stood directly in front of it two of the lobes were visible with a pair of bats on each. In each pair one bat was pointing up and the other down. Their flight seemed full of unquenchable high spirits. They made the chair-cover bats look repressed, inhibited. The bottom one on the right, the upward-flying bat, was the one that I liked best: it was a Let’s-do-it! bat. Do what? No idea, but I could already feel it on my shoulder bringing me luck. Most of the time people wouldn’t know it was there but I would and it would make a big difference.

Batting a thousand and feeling good I took out my little
Olympus mju-II which was loaded with Fuji 1600. The skylights ran the full length of the gallery and the daylight was more than adequate but just to be sure I shot the bowl with flash and without, from about a foot and a half and from further away. ‘Well done,’ I said, and put my camera back in the rucksack.

I had the bat I wanted but I felt, I don’t know, that I could have been a bit more of a gentleman in my second encounter with Boadicea. More English. Now that my bat was safely aboard I found myself wondering what her connection with it was. There were other non-bat bowls in that display case and there were other bats visible on the two bowls with bats but she’d been talking to my particular bat — it’s the kind of thing one instinctively knows. What did it mean to her?

I tried to guess what kind of life she had. Divorced, I thought, not widowed. Living on alimony? Maybe she had some kind of business. No nail polish. Did she do something with her hands? Antiques or something arts-and-craftsy? Maybe widowed, come to think of it — she could have worn the guy out. But the bat? A nocturnal animal. Was she a night person? Was the night a special time for her the way it is for me? ‘A symbol of happiness’. Was she looking for happiness? Not me. I was only looking for my self.