Read The Beauty and the Brawler Online

The Beauty and the Brawler 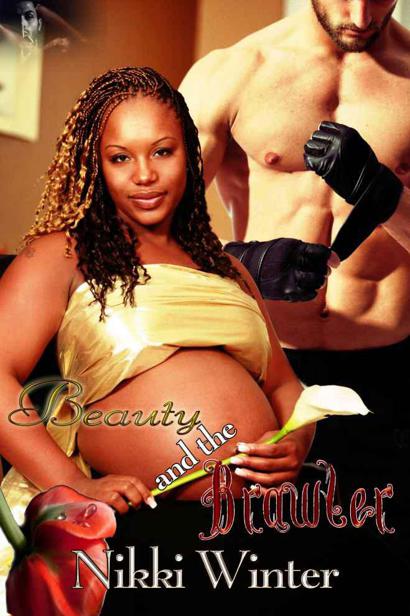 This is a work of fiction. Names, characters, places, and incidents are products of the author’s imagination or are used fictitiously and are no to be construed as real. Any resemblance to actual events, locales, organizations, or persons, living or dead, is entirely coincidental.

All rights reserved. No part of this book may be used or reproduced electronically or in print without written permission, except in the case of brief quotations embodied in reviews. This is a work of fiction. All references to real places, people, or events are coincidental, and if not coincidental, are used fictitiously. All trademarks, service marks, registered trademarks, and registered service marks are the property of their respective owners and are used herein for identification purposes only. eBooks are NOT transferable. Re-selling, sharing or giving eBooks is a copyright infringement.

There are no words. Just none. Okay, there are a few but after I get done with this dedication I’m going into hibernation…like a bear. A big angry circus bear. This story… Lord on high. Bills, as usual, you were a doll. Thank you. Janet, yes we are all aware that you have laid claim to Trip and Paz. Have at it. Drea, Luciano is all yours. You’re welcome. To everyone who is going to read this…blame my characters for the shenanigans about to ensue. Just blame ‘em all.

Luciano “The Philly Brawler” Antonelli was a fighter. He fought on the streets as a kid, he fought in business as a man, he fought in the ring as a world champion. As his gift graduated, so did his way of thinking. His fighting never stopped, just his methods. Twenty odd years later and he’s found himself fighting for something entirely different—the heart of a woman he’s wanted from the first moment he heard her voice. The second opportunity knocks, he takes a leap composed from faith and bravado, succeeding. Perhaps a little
too
much. Now he’s thinking up lullabies and trying to determine how to convince radio star Samara Blackwell that he wants her for more than just the life they’ve created resting on the inside of her ever growing belly. Is this one battle where he’ll have to call a draw? If the behavior of his obstinate little media queen is any indication than it just might be. But he’d
never backed down from stepping in the ring with
anyone.
And he’s not about to start now.

“I’m trying to determine whether or not I want you hard and fast first or slow but still just as hard.”

That voice. That. Damn. Voice. It was the reason she was here right now. The reason she couldn’t draw in a normal breath at the moment. The reason the apex of her thighs was soaked. And the reason she was about to do something she’d been wrestling with for a very long time now. The day Samara Blackwell laid eyes on Luciano Antonelli, somehow she knew they’d end up here.

It was her sister’s fault, and Samara would go to her grave claiming that. She’d been able to avoid Luciano for the better part of six years since she no longer lived in state and only came to visit occasionally and yet here they were. While over sixty people spent their night throwing back shots and celebrating Nyssa’s thirty-second—a number her sibling would never admit to—here she was, in his home, in his bedroom...

She didn’t reply to Luciano’s words, instantly knowing he wasn’t asking her. Bastard. The only reason he was still talking was because he knew what it did to her; knew every rough whisper against the shell of her ear made her tremble.

“Maybe hard and fast?” He chuckled, and more cream eased from her already moistened core. Huge hands slid along her sides, fingers tracing nonsensical patterns on her barely covered skin. “Not too sure I can be gentle right about now. Hopefully you’ll forgive me for that later.”

That was the only warning she got before she was spun around, her back pushed against a wall as his head descended. Mouths nipped and sucked, tongues dancing around one another, pulling, licking. With every caress of his lips against her own, Samara’s thighs clenched. His hands were everywhere. In her hair, on her shoulders then beneath her dress as he stole the breath from her lungs.

She was doing this. Really going through with it. Okay, she and two and a half glasses of absinthe were going through with it, but she was the vessel the alcohol was so obviously using so that counted for something, right? Besides, with Luciano’s fingers skirting the edges of her panties, her awareness was on one thousand and her judgment was quite clear. For every roll of his middle finger across her lace-covered clit, her hips jerked forward until he finally gripped the backs of her thighs and wrapped her legs around his waist. Her pelvis slammed into his own, something the size of a cucumber grinding against her.

God, he felt amazing between her legs. Why had she been denying herself this? The more he moved against her, the more every inhibition she had faded. Every doubt went up in flames. Her pussy clenched, her hips rolled. Leaning in, Luciano gripped one hard nipple through her dress with his teeth, tugging on it.

Jesus Christ, how did they get here? Oh, right, a three-hour drive, Nyssa, and absinthe. Not to mention years and years of verbal threats and the promise of a fucking she’d never forget clear in his eyes every time he gazed at her. Whether it be from across the room or inches away from one another, Samara had always seen that promise. It was loud and apparent.

Luciano finally released her mouth as she tugged on his caramel-colored curls. She watched his Adam’s apple bob. “
Definitely
fast and hard
.
”

With one hard rip, her panties disappeared. He backed away for a moment to drop to his knees. She felt his tongue on her before she had a moment to really process what was happening, and by that time he’d bent one of her legs to place it over his shoulder, French kissing her core in a way that made the muscles in her tummy lock up.

Then she was screaming and coming and gripping a fistful of his hair. Luciano stood, stripping out of his shirt, a condom materializing in his hand. He pressed his lips against her ear and whispered, “
Non ho finito con te ancora, bella.”

The ringing, it had to stop. She wasn’t sure whether or not it was coming from her phone or her head, but it had to stop. It had to stop
now.
The best way to make it stop? Throwing the phone across the room until all she heard was the crack of plastic then
nothing.

Rolling over was the first option and pulling the comforter back over her head was the second. Both held appeal. So much appeal. And yet, the most she could do was stay on her side and pray to God above that whatever little she’d forced down her throat as food the night before wouldn’t come back up...
again.

“God, it’s me, the one you haven’t talked to since Easter Sunday when I punched that kid in the balls because he tried to steal my eggs during the hunt.” She took a deep breath. “How about you just kill me instead of dragging it out?”

She’d never been this sick before. Even having the flu and sharing a room with Nyssa while her older sister entered DEFCON One of her period hadn’t felt this fucking awful. The part that frustrated her the most was the fact she didn’t even
know
where it came from or why. It had started about a week ago with nausea and then...

She lost her balance when she jerked up in bed, rolling over the edge after getting tangled in her sheets and hitting the floor. Her mouth opened to scream but no real sound left. Just a hoarse croak upon impact.

With slow, shaky movements, she stood and hobbled over to her tablet, which rested on her desk. Powering it up, she shifted from one foot to the other. Christ on high, it was Thursday. When had
that
happened? Samara did a mental calculation of how many days she’d been on her ass.

The Witch and the Wolf: Part Two by Lola Kidd
Dollmaker by J. Robert Janes
Living Forest by Lyle, Travis
The Girl by the Thames by Peter Boland
Nacho Figueras Presents by Jessica Whitman
Their Dark Hunter (Masters of Darkness) by Angelini, Alaska
In the Season of the Sun by Kerry Newcomb
Speak for the Dead by Rex Burns
Born To Be Wild by Patricia Rosemoor
Griffin's Shadow by Leslie Ann Moore
Our partner