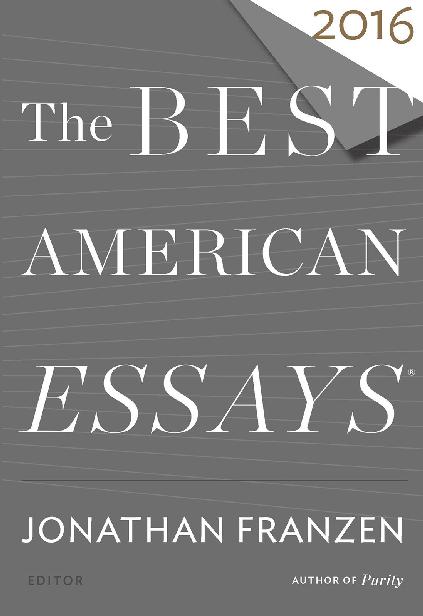 “Offers illuminating, invaluable glimpses into lives that might otherwise remain outside the reader’s ken” —*Publishers Weekly
*

The award-winning and best-selling Jonathan Franzen picks the best essays from hundreds of magazines, journals, and websites. He brings his “elegance, acumen, and daring as an essayist” (
New York Times)
to the collection.

The Best American Series®
A true essay is “something hazarded, not definitive, not authoritative; something ventured on the basis of the author’s personal experience and subjectivity,” writes guest editor Jonathan Franzen in his introduction. However, his main criterion for selecting
The Best American Essays 2016
was, in a word, risk. Whether the risks involved championing an unpopular opinion, the possibility of ruining a professional career, or irrevocably offending family, for Franzen, “the writer has to be like the firefighter, whose job, while everyone else is fleeing the flames, is to run straight into them.”

JONATHAN FRANZEN, guest editor, is the author of five novels, most recently
Purity,
and five works of nonfiction and translation, including
Farther Away
and
The Kraus Project.
He is a member of the American Academy of Arts and Letters, the German Akademie der Künste, and the French Ordre des Arts et des Lettres.
ROBERT ATWAN, the series editor of
The Best American Essays
since its inception in 1986, has published on a wide variety of subjects, from American advertising and early photography to ancient divination and Shakespeare. His criticism, essays, humor, poetry, and fiction have appeared in numerous periodicals nationwide. 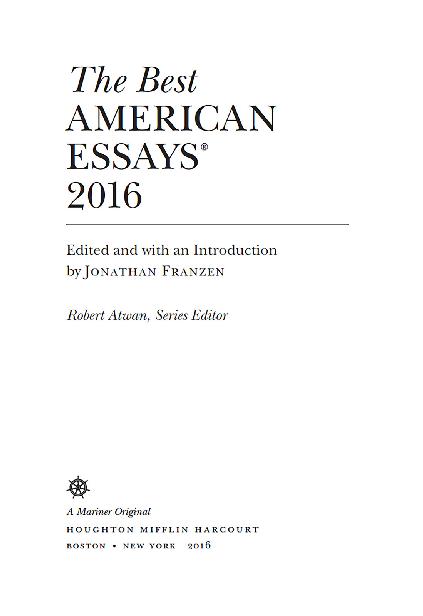 IRINA DUMITRESCU
, My Father and The Wine

ELA HARRISON
, My Heart Lies Between “The Fleet” and “All the Ships”

SEBASTIAN JUNGER
, The Bonds of Battle

JUSTIN PHILLIP REED
, Killing Like They Do in the Movies

Notable Essays and Literary Nonfiction of 2015

No part of this work may be reproduced or transmitted in any form or by any means, electronic or mechanical, including photocopying and recording, or by any information storage or retrieval system without the proper written permission of the copyright owner unless such copying is expressly permitted by federal copyright law. With the exception of nonprofit transcription in Braille, Houghton Mifflin Harcourt is not authorized to grant permission for further uses of copyrighted selections reprinted in this book without the permission of their owners. Permission must be obtained from the individual copyright owners as identified herein. Address requests for permission to make copies of Houghton Mifflin Harcourt material to Permissions, Houghton Mifflin Harcourt Publishing Company, 3 Park Avenue, 19th Floor, New York 10016.

“A General Feeling of Disorder” by Oliver Sacks. First published in the
New York Review of Books
, April 23, 2015. Copyright © 2015 by Oliver Sacks. Reprinted by permission of the Wylie Agency, LLC.