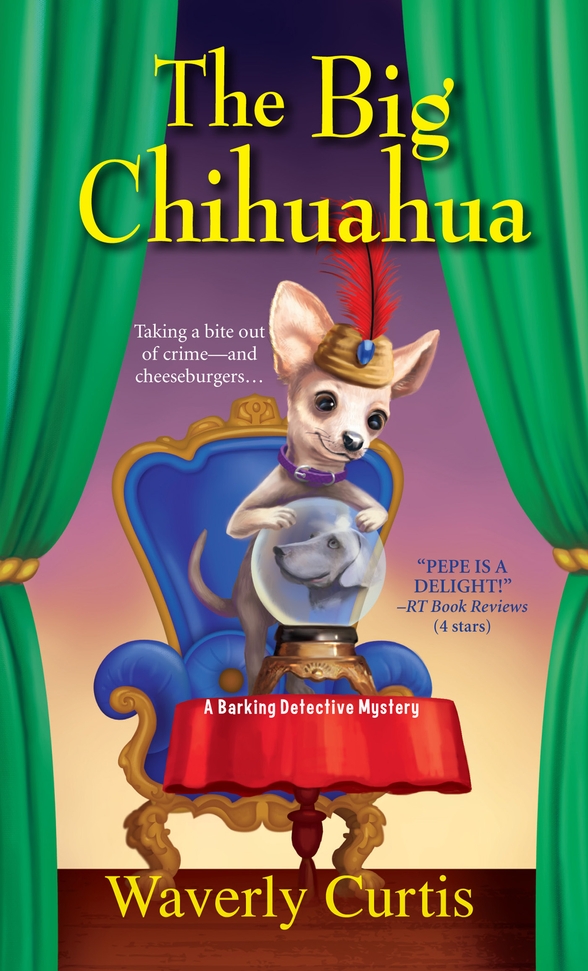 TAIL-WAGGING PRAISE FOR THE BARKING DETECTIVE MYSTERIES
CHIHUAHUA CONFIDENTIAL
“Hollywood is the stage for this enjoyable caper starring amateur P.I. Geri Sullivan and her talking Chihuahua/partner, Pepe. The characters are comical, especially Pepe, who will have you laughing out loud. A great read.”
—
RT Book Reviews,
4 stars
“Light as a feather and a whole lot of fun.”
—
Seattle Times
“Hop on board the TV-studio tour bus for this light cozy.”
—
Library Journal
DIAL C FOR CHIHUAHUA
“Three woofs and a big bow-wow for
Dial C for Chihuahua
. Pepe is one cool sleuth—just don’t call him a dog! I really loved the book.”
—
Leslie Meier
, author of the Lucy Stone mysteries
“Readers will sit up and beg for more.”
—
Sushi the Shih Tzu
, canine star of the
Trash ‘n’ Treasures
mysteries by Barbara Allan
“Writing duo Curtis has created a humorous but deadly serious mystery. Pepe is a delight and more intelligent than most humans in the book. An ex-husband and current love interest keep Geri’s life hopping. Crafty plotting will keep you engrossed until the end and have you eagerly awaiting the next book.”
—
RT Book Reviews,
4 stars
“Every dog has its day and there’ll be plenty of days for Geri Sullivan and Pepe in this fun twist on the typical PI partnership.”
—
Simon Wood
, author of
Did Not Finish
“Waverly Curtis has created a delightful cast of human and canine characters in
Dial C for Chihuahua
. Pepe never loses his essential dogginess, even as he amazes gutsy Geri Sullivan, his partner in crime detection, with his past exploits and keen nose for detail. I look forward to Pepe’s next adventure!”
—
Bernadette Pajer
, author of the Professor Bradshaw Mysteries
“Move over, Scooby-Doo, there’s a new dog in town!
Dial C for Chihuahua
is a fun and breezy read, with polished writing and charming characters, both human and canine. If you like a little Chihuahua with your mystery, former purse-dog Pepe is a perfect fit!”
—
Jennie Bentley
, author of the Do-It-Yourself Home Renovation mysteries
Also by Waverly Curtis
Dial C for Chihuahua
Chihuahua Confidential
Published by Kensington Publishing Corporation
The Big Chihuahua
Waverly Curtis

Shadow of Hope by Pollick, Tina, Rose, Elizabeth
The Absent One by Jussi Adler-Olsen
Symbiont (Parasitology Book 2) by Grant, Mira
Sticks and Stones by Kerrie Dubrock
1066 by Andrew Bridgeford
Jane Austen in Boca by Paula Marantz Cohen
The Redheaded Princess: A Novel by Ann Rinaldi
Alone by Marissa Farrar
Driftnet by Lin Anderson
Seasons of War 2-Book Bundle by Cheryl Cooper
Our partner